Five Parsecs from Home - Game 2 - "Moving on Through"

Seeing Chaket was still smarting from his minor wound, incurred during his crew's first job, Mason decided to use a chunk of his available Creds to call in a favour from his families physicians and get Chaket back on his feet. With debt still on the Solar Conveyor, it was also preferable that he paid off some of this as well.

Whilst the Forge family physician was attending Chaket, Mason detailed off the rest of his crew, using the down time wisely whilst waiting for one of his Patrons to call with a new job.

Taking Cal out and about in Erlich's main trade zone, Mason called in on an Alien Merchants shop he had heard about and after a bit of negotiation managed to come away with some damaged Combat Armour and Battledress, all in exchange for a Military Rifle. Looking around for Cal who had disappeared during the deal, Mason soon saw him sheepishly walking back into the shop. "Sorry Boss" said Cal "I got distracted and lost the Shotgun in a game of Triad Poker"

Mason's face showed his anger "You damn well better hope SH-1RE has repaired that Plasma Rifle when we get back or your sonic scrubbing the Vacuation tubes for a week!"

Returning to the ship, Mason's comm-Link chimed and Kheth's disembodied voice emanated from its small speaker. "Captain. True and I spoke with the doc and he told us a load of med stuff has come onto the trade catalogues, we've score some stimms and a case of med patches, going to be damn handy now in jobs are getting heavy".

"At least some one's come up trumps" muttered Mason looking over at Cal.

Back at the ship, the Doc informs Mason that Chaket is up and mobile and will be fine but no stellar travel for a few days.

Looks like I need a job at home then thought Mason. As luck would have it though, a Sector Government Official, 'Famelle Bude', who worked along side the Forge family for many years offered a job which needed completed immediately and if it went well would be able to provide a regular supply of jobs or opportunities.

'Bude' was offering private transport to an old freight depot, Haarland Point, on the south continent, which was rumoured to contain a peculiar item, possibly an alien holo-transmitter, however the transport could only carry four passengers.

As the job shouldn't be too much of a hassle due to the minimal danger pay, Mason told True and Kheth to catch up on inventory of the med supplies and ship maintenance.

The transport finally landed on the edge of the depot and the door opening, Mason was met by a gloomy darkness which seriously hampered vision. Cal rolled his eyes, "well that's going to make finding anything more awkward but at least any Security will struggle to see us - that's if they don't have Infra Red!"

Battle - Move though the Freight Depot, defended by Security Robots. 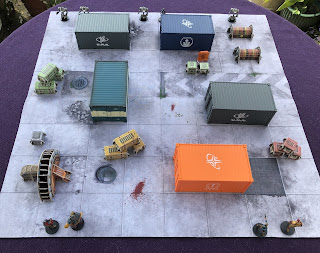 Entering the freight depot, Mason silently positioned his crew, who had already been instructed to move through the area quietly, find the holo and get out hopefully without incident.
Moving cautiously though the gloom and staying in cover around the numerous containers and crates littered around the area, Mason and his crew could hear metalic clanks in the distance.
Not knowing the full extent of any security forces, Mason really didn't want to get into a heavy firefight.
Turn 2 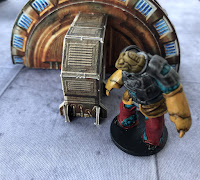 Slowly through the gloom, ominous shapes could be made out rolling forward, the odd red flash of a robotic visor visible.
"Mason" came Chakets voice over his wrist comm "Looks like Security droids taking defensive points". Suddenly a loud retort was heard.
"Damn that was close" shouted Chaket, as a shot from a Sec-Bot opposite him, slammed into the generator he was crouching by.

Chaket edged forward With Cal in support, opening up with his newly repaired Plasma Rifle. A flurry of superheated plasma engulfed the Sec-Bot and turned it into a molten puddle. Cal also managed to put another out of action with a well aimed blast from his shotgun.
With the right flank of Mason's crew now seemingly out of any danger it should be easy enough to scout around looking for the required holo.
Turn 3

With Mason's crew now growing more accustomed to the gloom, largely helped by the flashes of gunfire reflecting off the many containers around the depot, they could make out the remaining shapes of sec-bots set up in their defensive positions.
Also to Masons amazement, there right in front of him, just behind some crates was a glowing orange translucent box. surely that's the holo Mason thought to himself. 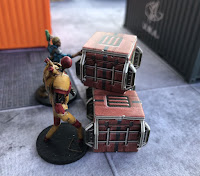 However a sec-bot was also in the same position as the holo and it cleared had pre-programmed ideas about letting anyone anywhere near it or basically in the depot full stop.
Opening fire with its inbuilt arsenal the sec-bot hits SH-1RE cleanly in the torso armour plating but fortunately it only seems to chip his paintwork and scramble a few non required circuits
Seeing his Droid taking fire, Mason calls Chaket and Cal over his wrist comm to support them. Making their way over however another sec-bot that hadnt been noticed rotates from the rear of some containers and catches Cal with a hail of bullets. Cal drops to the ground lightly wounded and blasts himself with a stim shot.
Turn 4 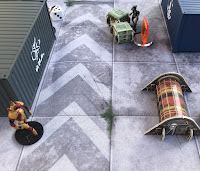 Chaket who had not been seen following up Cal, hefts his plasma rifle and just glances the sec-bot scrambling its circuits. The bot diagnostics kick in and it fires wildly, nowhere near any chance of hitting its targets.
The sec-bot in front of Mason and SH-1RE also fires wild and inaccurate, clearly whoever programmed the fire control on these bots didn't upgrade to the best software.
Turn 5 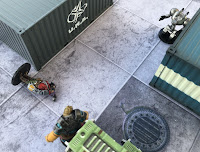 The sec-bot on the flank, finally reinitialised itself and this time its fire is direct and accurate dropping Cal, who after already using his stims collapses and bleeds heavily on the floor. The other remaining sec-bot lets rip and a hail of fire catches Mason seriously stunning the crew boss but nothing more serious. 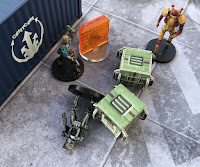 Chaket melts the sec-bot who had crippled Cal and runs to his colleagues side to try and staunch the bleeding and is relieved to see Cal is breathing...just!
SH-1RE aims and drops the remaining sec-bot with a single round, allowing Mason to limp forward and take control of the holo.
With no more security bots in the area, the crew move forward and leave the depot awaiting the arrival of Bude's transport to take them back.
Post Battle
Back on the transport, Chaket hooks Cal into a med scanner and it beeps constantly, "Boss, I think Cals gonna need surgery, he's half crippled on the left side and the rounds have shredded his nervous system, hes going to be out for a while, even after surgery"
"Ok" Shouts Mason "Whatever he needs, put in a call to the doc and tell him we will pay whats needed if he gets operating fast"
Landing back at Bude's residence, Mason collects the pay from the job and hands over the holo "So much for your lack of danger pay Bude! have you seen Cal, he's seriously hurt"
"One crew member hurt Mason" replies Bude, "I am surprised your that shocked, I would take that as very good odds overall"
"Anyway" carried on on Bude, "Maybe this will help, I have a contact in a shipbuilders, who does custom modules for any vessel. I have got you a good discount on medical bay"
"Well that will help" replies Mason "and your danger bonus better be raised for the next job"
Back on the Solar Conveyor, Mason tunes into the Sector news channel which is reporting on planetary invasions in a few close systems.
"The war seems to be getting closing" says True worryingly.
"Well, we are well stocked with fuel and weapons and supplies True" replied Mason "If we need to get out quick we will do, dont worry"
So with a persistent Patron on Erlich-4 and not many rivals the crew of the Solar Conveyor are staying put..........for the
Posted by Carl at 13:03