Across the Dead Earth Scenic Additions

Finally getting back into my Post Apocalyptic gaming and especially Across the Dead Earth. So I though I would have a bash at putting some terrain/scenic pieces together as I am seriously lacking at the moment, only having the usual crates, barrels and sandbag type scatter terrain.

So what to do? the odd piece here and there or start a full project? Well I have plumped to try and get enough bits done to make a Post Apoc/rundown old airfield. This will have a Control Tower, additional buildings in various states of repair, Security fences, abandoned/rusty vehicles, crashed helicopter and a large transport aricraft as a centre piece.

A few rusty abandoned military vehicles, these came from Poundland as a set of 3 Police 4x4's and after a quick respray and rusting up, I think they look quite the part. They were sprayed black as an undercoat then the wreck was given a basecoat of GW Tin Bits after which GW Rust was applied with the stipple method. The other two were basecoated with a spray of olive drab then patches of GW Tin Bits applied followed by more Rust stippling. 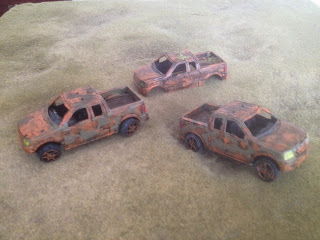 My crashed helicopter (also useful for them Zombie games) another Poundland special. This was pull cord motorised toy and needed the large workings removed from underneath the fuselage. No problem, a quick hack job and instant crashed damaged chopper! The helicopter was not repainted in anyway, only a wash of GW Rinox Hide and Agrax Earthshade was applied to dirty it up. 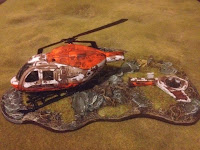 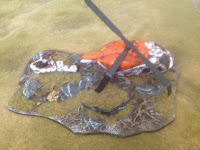 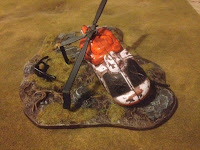 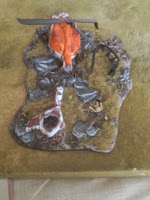 The base is made from a GW forest base, with an added skeleton body from my bits box.

As per my previous post this month, I went to compete in Worcester Wargames Relics Tournament. Due to problems at work this saw me having to finish a 12 hour nightshift on the morning of the tournament and then drive nearly 3 hours to Worcester to take part.

Although extreamly tired I was hyped to be playing and getting to meet a load of new gaming mates.

On arrival at the venue I met Lee, the organiser and his mate Fish who jumped in my car and showed me a £1 all day car park (bonus). On arrival back at the venue and after a very nice deserved cup of tea, more people arrived and finally we had a full dozen excited gamers ready to play.

I have to say this tournament was one of the nicest, friendliest, well turned out (I mean the miniature forces, as all were very well painted and displayed) events I have attended in a long time.

I had decided to take my Nuem and had managed to get them all painted and bases to a standard I was exceptional pleased with.

On to the games then: 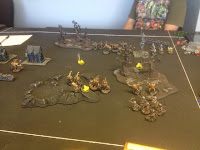 So a Nuem civil war game, with a control scenario - there were 5 shard objective counters and victory points would be calculated on who controlled the most at the end of the game. I won initiative and both sides moved into postion with myself sending a Dedicatus and degener on a left flanking move to take control of a shard whilst the rest of my force got ready to attack the centre of the board and rain death on Chris's advancing Nuem rebels. 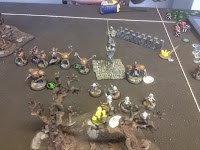 1st blood to me as my Sagittarius unit managed to kill one of Chris's Sagittarius automatons. Chris then advance with his Dedicatus which was swiflt despatched by guided shots from my Tormentas.

Chris's Pueri cast a repair spell and brings back the destroyed Sagittarius, then he manages to pop off one of my Sagittarius. In return my Degener advances from the flank as the Dedicatus takes a shard and opens fire with a full 5 dice shot and kills the opposing Sagittarius that was just repaired. 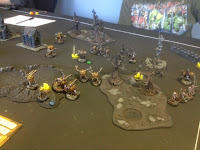 On the opposite flank my Peanetentium Death Babies charge into Chris's Death Babies in a tit for tat move and wipe out 3 of them in melee forcing them Shaken.

Chris's Degener opens fire in retaliation killing 2 of my Death babies. In the centre of the board my Concursus charge their opposite number and destroy one whilst my Death Babies annialate their opposite number. With Chris not managing much on his next phase my Degener finally advances further and kills and Sagittarius. With the game ended I had control of more Shards.

Victory 2-0 in VPs and a massive Kill Point total. 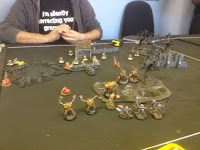 With a good win over Chris I then had a match up against Russ with his Britanans who had stormed a 3-0 win in their last game. I have been a Britanan player in the past and know they can cause a lot of damage, especially now with the erratta on their marksmen and Bomber units. This scenario was again to control Shards but there were 7 on the board this time and as a twist 4 of them (chosen randonly at the end of each turn) would explode possibly causing damage to close by units.

I made a huge mistake on my set up (being quite tired by now) and lumped all my units together in a large block ready to contest the largest concentration of Shards on my left flank. This played straight into Russ's hands as he won iniative and managed to get his scout deployed Bomber close to my units as I also completely failed to negate it by shooting it when I had a chance. 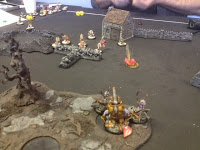 One of my Tormentas sends a guided shot at the Marksmen in the open and kills it, then a Markman takes a bead on his own Bomber, shoots it and gets it to explode ripping the heart out of my lines. The explosion destroys my Concursus unit in the woods, causes damage on my Dedicatus, Degener, Pueri and kills a few Death Babies. It also knocks down my Pueri and a Sagittarius.

My Death Babies scoot away behind the wood for cover and Russ's Marksman shoots and kills my Degener. A few Shards have exploded causing a few casualties on the puppet army but the rag horde still holds. My Dedicatus is taken out in short shrift but my Tormentas put some serious hurt on the central block of Puppets with their shots and black pulses even managing to kill the Puppet CSM and decimating the Highlanders.

My Pueri is taken out by a Marksman whilst still knocked down and his Arcanum Guard cast Kings Anger on my Death Babies, incinerating most of them.

The game ends and no one actually has controll of any Shards. 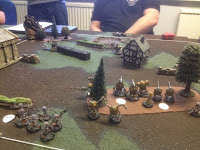 Another Nuem civil war and I was reeling from my drubbing last game and flagging in energy, but after a few cups of coffee I was ready for my last game.

This scenario had no Shards by each player had an extra model as a mailman. The aim - to get their mailman of the oppositie side of the board (and kill anything else mwhahaha) Both sides set up with mailmans on opposite flanks. 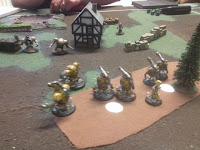 Tom advanced his mailman with a Domini and Pueri for protection whilst I held mine back for a bit as my central gunline took out the opposite forces. Tom was disadvantaged slightly with lack of numbers but his small force was packed with some hard hitters. My Death Babies switched position to cover Tom's mailmans advance and finally charged in and took out his Domini, whilst my Concursus charged his mailman. 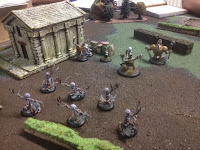 On the other side of the board, my Sagiattarius and Tormentas had been blasting away at anything that moved, wiping out Toms Degener and leaving his Medicae inert with no controlled, whislt each of our Dedicatus battered each other to a standstill in the middle of the battlefield.

Finally I managed to gun down Toms other Pueri on the right, leaving my mailman and easy run straight of the board.

Victory 2-0 and a massive Kill Point total to me.

After all results were submitted Russ had won over all (as well as the best painted prize) and I had come 4th.

A fantastic day out, awesome friendly opponents and some great new mates.

Kudos to Lee for the organization of the event.


Some of the forces on display 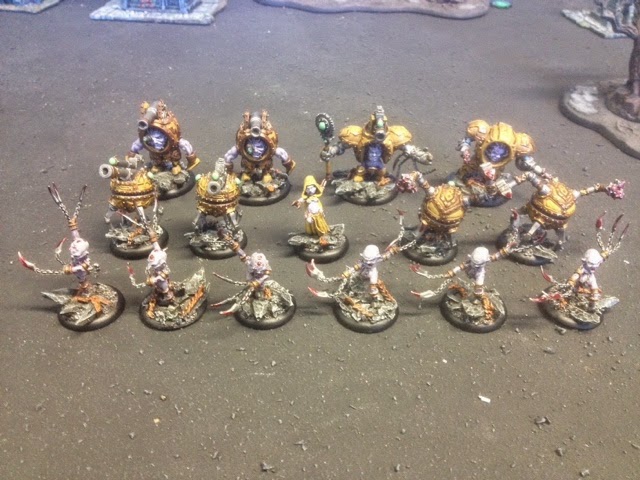 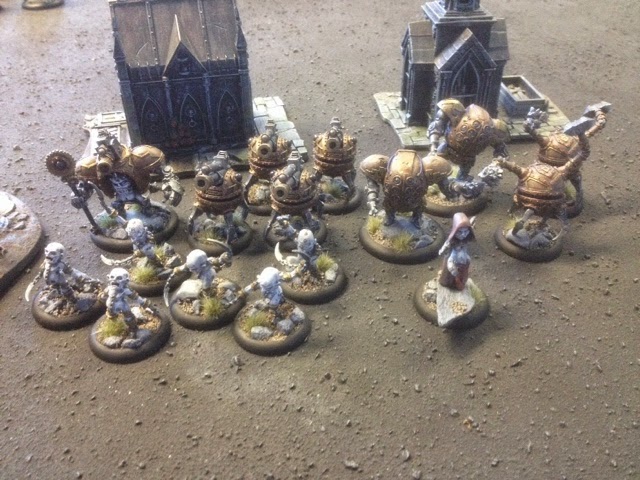 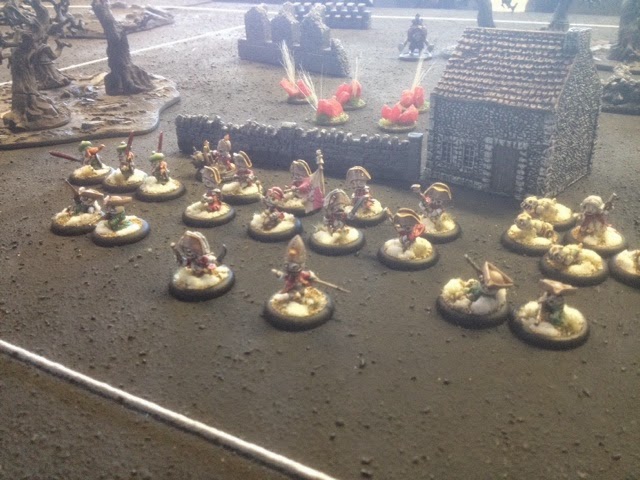 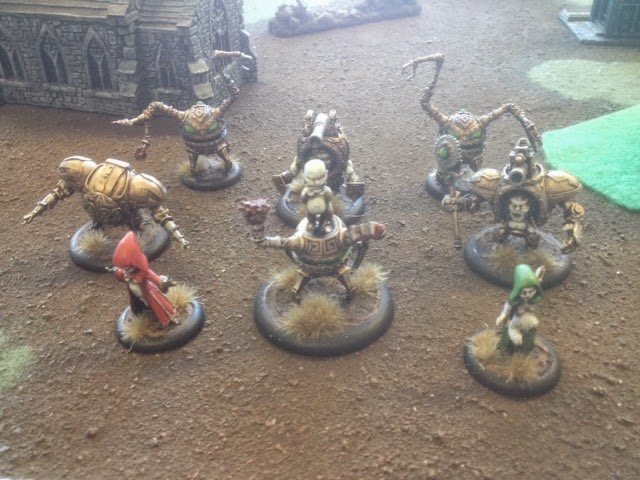 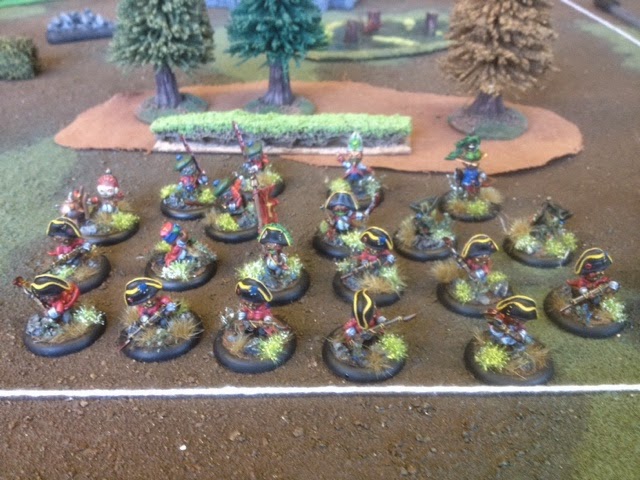 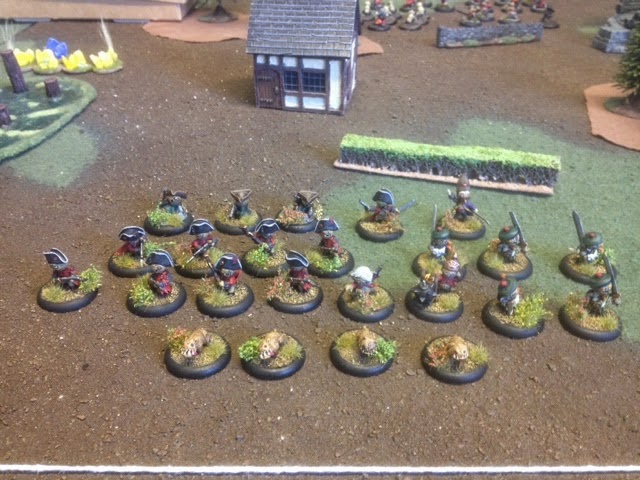 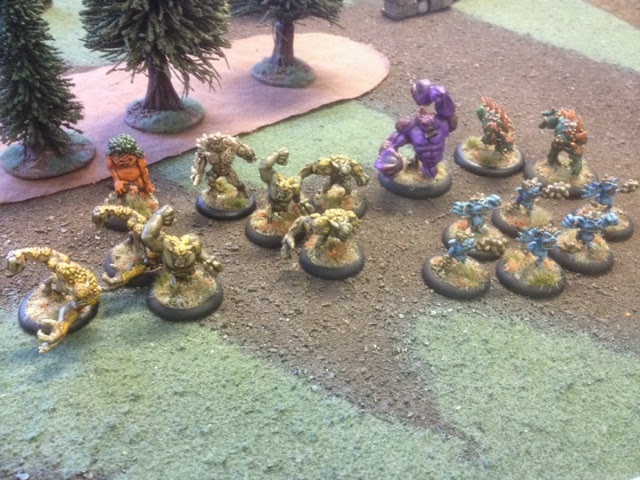 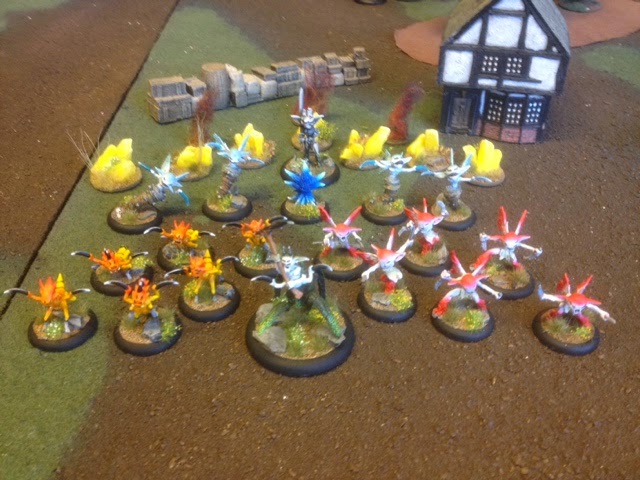 As I usually do, I have left it extreamly late to get myself organised for a tournament. This time its for Tor Gamings wonderful game Relics. I have prior experience with this game, coming second place in a previous tournament using the Britanan (puppets) faction.

This time the tournament is being held by Worcester Wargames and I am going to use a new faction - Nuem. These guys are pain loving dwarves with awesome battlesuits and a penchant for chains!