I have been and always shall be your friend. 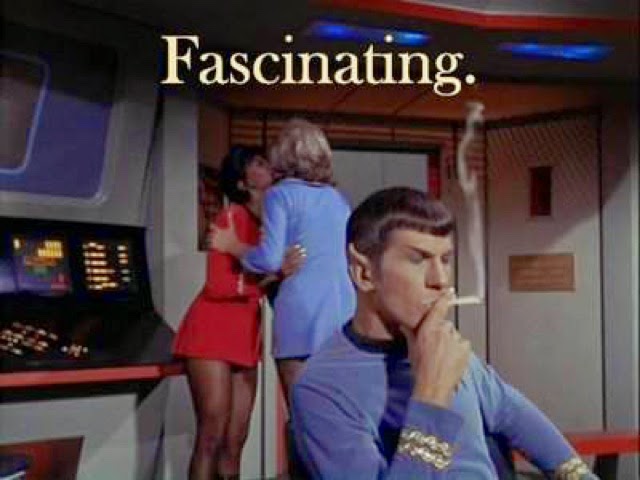 It is with great sadness that I write this post, In memory of an extremely talented actor/writer and director.
As Spock and as Vale Leonard Nimoy, you will live long and prosper in my heart and thoughts.
Now I'm off to listen to the Ballard of Bilbo Baggins and rewatch the Original Series. 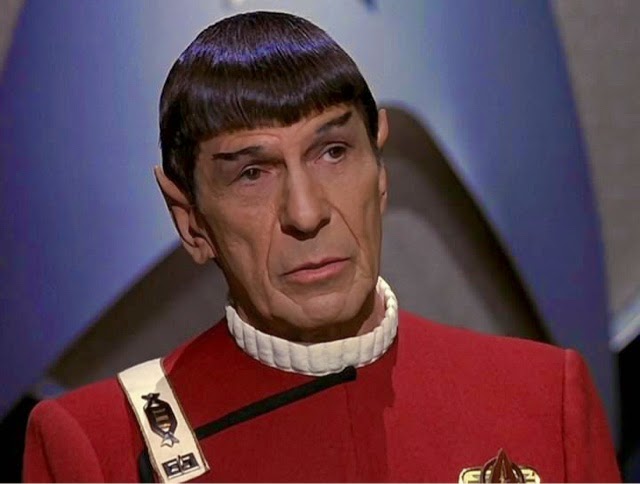 This match saw my Orcs square up Nics Norse in the Final of our wargames clubs BloodBowl League Cup - The Vase. 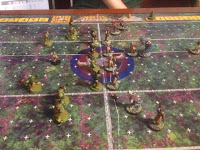 It had been a hard slog playing though the cup matches as well as the league and throughout it had thrown up some unexpected results. So it came down to both these teams vying for the honour of the Vase. The weather was nice (for a change) and the Vixens had a slight advantage in the screaming horde of fans in the stands. The Orcs kick off, with the ball landing right next to the line of scrimmage on the Vixen's side.. The Norse start their drive and the Snow troll blitzes a Black Orc and KO's him.
The Vixens Thrower goes for it to collect the ball but trips over his shoelaces and falls on the ball. The Bloodjaws consolidate their line and collect the loose ball. The Snow Troll goes on a rampage and after crunching the ball carrier the Vixens control the ball and pass it downfield resulting in a TOUCHDOWN 0-1. 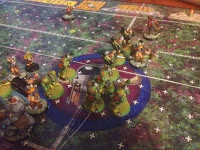 The teams set up again and the Vixens kick and BLITZ!!! it comes to nothing though and the Orcs steam forward with a Black Orc killing a Vixen Lineman with a block, but the Orc Thrower cant gain the ball even with Sure Hands. A Norse Runner Jumps Up and Blitzes down the line and eventually with a Go For It gets the ball and scores again TOUCHDOWN 0-2. The Orcs are reeling and its not even half time yet.
The Norse kick to the Orcs again and the Bloodjaws cry Waaagh storming forward and causing a few CAS finally driving into the endzone at the end of the half to score TOUCHDOWN 1-2. 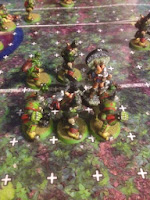 Second half and the Norse are down a few players. The Orcs start well and gain the ball as well as causing a few more CAS including a death!! with Vixen players being dragged off the pitch, its wide open for a Bloodjaws Blitzer to sprint in to score TOUCHDOWN 2-2. The Vixens set up and receive the kick. They try hard moving the ball around and keeping it away from the Orcs but finally the Bloodjaws numbers start to tell and and the balls falls into their possession. The Orc Thrower pumps a long pass downfield into the waiting hands of a Blitzer and the Bloodjaws score TOUCHDOWN 3-2.
BLACKMOUNTAIN BLOODJAWS WIN THE VASE!!

Another small project that I will be working on from time to time. I have always liked the Full Thrust game from GZG but have never obtained any of the range for myself, always using someone else's models.

Now, thanks to a small trade, I have the starting's of a NAC fleet. The NAC or New Anglian Confederation are the amalgamation of British, American and Canadian with the Brits being the dominant ruling member.

Last weekend I attended my local wargames club, annual BloodBowl Tournament - The Boudica Bowl (III) which was due to a very fortunate change in shifts at work, as originally I wasn't able to attend.

owing to the late change in circumstances I did not have time to put a team together so decided to take my Dwarf team which debuted in the 1st Boudica Bowl. Before the 1st game and after the 4th a certain skillset could be taken.


2 X Blitzers
2 X Runner with block before game 1.
7 x Blockers, 4 with Guard before game 1 and another 2 with Mighty Blow after game 3.
1 x Flint Churnblade with Chainsaw


The weekend was brilliant and every coach was NAF ranked.


I did not take many pics or write descriptive game reports due to the time constraints but below is a run down of how the games went.


Brilliant game with a cracking opponent who laughed and smiled through all the carnage. Would happily play Nick any time.


Dwarf vs Underworld, Nuffle completely screwed me Lost 0-3 and 4-3 CAS to me.


I lost big, dice were worst in years!


Geoff was really unfortunate to play me after that last game and all his agility seemed to of left him, where as my crunchy smash decimated his team. Throughout it all though Geoff was a great opponent.


Dwarf vs Ogres, The curse of Sunday morning and a very close Loss 1-2, 8-1 in CAS though.


Gary was immense with his Ogre's but it came down to a sneaky sidestepping Snotling doing the impossible dodges to snatch the ball in the endzone to give him the cushion.


Really fun game and Dave was great to play, even if the damn Vamps didn't want to suck blood all game!!


Dwarf vs Nurgle, another Draw 2-2 with both of us not going for the win as each were too concerned about losing the game. 2-2 on CAS.


In the end with all the results I came 8th and won most Casualties with 30!!!!!