In a varied mash up of Sci-Fi Invasion Mash Ups, the recently set up of 7-TV Studios in the Dales Whitworth Centre started filming their new episodes, not knowing whether the staunch defenders of the Earth or the multitude of diverse Alien Invaders would Attack!! Rein Supreme, Just be Friends or become Masters over the Universe.
Sunday saw a few dastardly Invaders (myself included - with my Mars Attacks Cast) and a few Stalwart Earth Defenders attend the Dales Wargames 7-TV "Invasion Earth" games day.

Using these profiles my cast was made up of:

The days was set to host three games, but my first opponent was my friend Simon of brummies wargaming blog and the game finished early so we rolled another scenario and had another game.

Setting up on the Wooded Ruins table that Simon had provided, My Martians surged forward and gained a quick handful of Objectives whilst screaming their war cry Ack Ack Ack and vaping poor Cops. 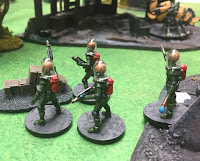 Riggs and Murtagh using a combination of lucky and high powered pistols, shot down a few invading Martians, including Murtagh creeping up on the Supreme Comamnder and blasting him causing some serious damage. Unfortunately, although spaying green blood across the ruins, the Supreme Commander remained on his feet and ordered his relentless troops forward.

The Mutant Spider leapt from the ruins behind Riggs and Sgt Hooker and managed to devour the poor cop leaving Riggs alone. However Riggs managed to overcome his revulsion of the Fearsome beast and with some Hollywood sorry 7-TV studio Martial Arts, took down the chittering monster! 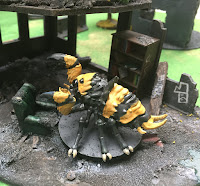 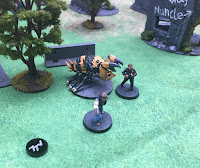 The Martians however could not be stopped and with Riggs and Murtagh escaping back to the precinct the Invasion continues.

Victory for the Invaders.

Riggs and Murtagh had retreated from the initial Martian Attack, back to Precinct 13 and got ready to defend the VIP (Axle Foley) who had some important information that might stop the Martians.

My Martians had to Assassinate the VIP to make sure further incursions against Earths defenders were successful. As this was a bonus game (other participants were still on their first game) we stayed on the same board and the same sides. Which worked well for Simon having the large squared ruined building for the Precinct.

With Foley staying tucked away safe inside the ruined precinct building, Riggs and Murtagh, accompanied with a few cops moved to intercept the Martians, who were trying to flank them. 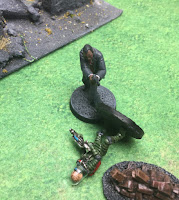 The Martians were soon bogged down by some abandoned vehicles, by a hail of accurate fire from the police and detectives but a miscommunication in where Extras were supposed to be saw a cop and a Martian trooper in the wrong postion. A situation both the Mutant Spider and Rigg's took advantage of...munch munch Blam!! 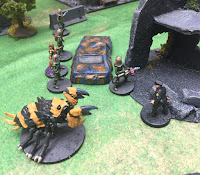 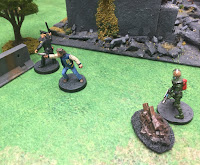 Riggs after dispatching the misplaced Alien then moved up and using a nerve gas canister he had found in the police station, popped the cap and launched it at the invaders. This only weakened the Martians but seeing the insidious aliens succumb to their assault, the cops steeled themselves and charged a few of the remaining Martians and clubbed them relentlessly with their daysticks.

Both casts were reeling from the demanding script but it was then that the Supreme Commander who had been watching and waiting, used his Alien Domination mind control whatsit on Foley who had been left unattended. Now under the Martians Commander, there was nothing that could be done as the Menacing Martians used their heat ray on him, setting him on fire - crispy cop!! 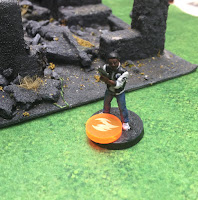 Although the VIP had been incinerated the cops had held the thin blue line.

My next opponent was pretty new to 7-TV and as I am a fairly seasoned player I was asked to take him through a game. This game was to be played on a smaller than usual board, I labelled it the Oil Refinery board.

We played the Race scenario as I thought it would be a simple one to do - just seeing who could gain the most objectives and take out the most of the opposition.

Peter started with his Spec Op cast behind the Refinery and I was on the opposite edge near the pipeline. The Spec Ops troopers dashed out from the cover of the refinery and opened fire on the advancing Martians, catching the Invaders moving into position and took a few down.

However, in their haste to combat the alien peril, they had left themselves seriously exposed and the Martians took great delight Ack Ack Ack!! in vaping the poor soldiers in the open. 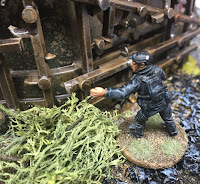 The Commander and her escorting Spy had tried to flank the Martian Supreme Commander and his bodyguard of troopers but even with the help of some dodgy scenery placement they couldn't gain the upper hand. 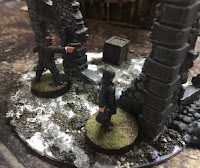 With the Commander pinned behind cover and her Soldiers getting vaped around her it was soon all over and the Martians resumed their Invasion!

Peter was extremely unfortunate that his Soldiers were caught in the open after dropping a few of my martians. My attack dice were amazing for the first two turns and I practically wiped out his extras causing his cast to be Axed very quickly.

With the Invasion in full swing and Earth practically dominated by Mars' Attack the Supreme Commander made a move on the last bastion of Earths defence - the Airbase at Area 51. A major thorn in the side of Mars for many a year and of personal significance for the Supreme Commander as his own batch sibling had been experimented upon in one of the black hangers.

The fact that he and his Science Division had been experimenting on abducted humans for years was of no consequence in his demented alien mind. 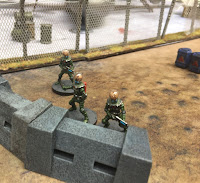 On arrival at the location, with the order Kill all Humans - Area 51 was already devastated. Bemused, the Supreme Commander wondered who could have done this?

Then an ominous du du du dum du du dum sounded out across the field and out of the smoke and debris strode an ominous silent, silver line of armoured, murder death kill bots.

Looks like Mars isn't the only Invaders with designs on the Earth.

Caught in the sights of the stoic Killbots, the Supreme Commander decides to leave Area 51 as quickly as possible, hopefully dismantling a few of the bots on the way. Unfortunately there is no sign of any furnaces of molten metal to lower the red eyed machines into so hopefully a few well placed vape rays would suffice.

Skynet took a wide stance right across the airfield, each Killbot autonomously activating and marching towards the Martins. 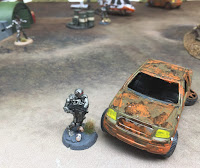 Vape rays shot across the area, reflecting of the chrome surface of the death droids armour. A few rays finally found a chink in this armour but the Killbots are near invulnerable.

With the Supreme Commander dashing across the airbase and into the distance, slowly followed by a large mutant spider a Killbot finally goes down and fails to rise.

A bad set call, see's a Killbot extra swap positions with a Martian Trooper, right next to the Spider. The Martian is cut down by Chromepants and the Spider breaks a fang trying to bite down on solid titanium armour. 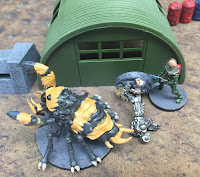 In one of the most ludicrous parts of the episode a Martian Trooper runs up behind the Killbot that the Spider ineffectively attacked and presses its deactivation switch!! 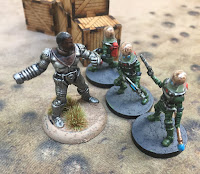 A few more Martians are gunned down by the silver machines and Chromepants walks up and crushes two out of the 3 Martians trying to upload the Y2K virus into him. Enough Aliens get across Area 51 taking down another Killbot however and the director screams thats a wrap!

I had an absolute blast. The whole day and event was brilliant. Kudos on the organisation by James and Dale Wargames Club and especially as I got to meet up with good friends Simon and Kieron and some new people.

Some of the tables 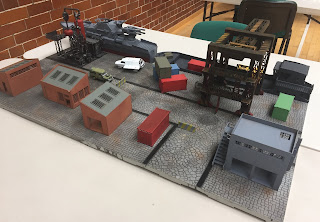 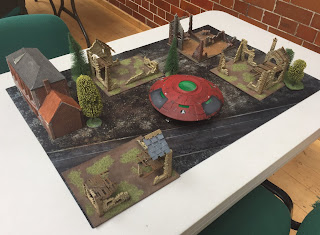 Some of the other casts 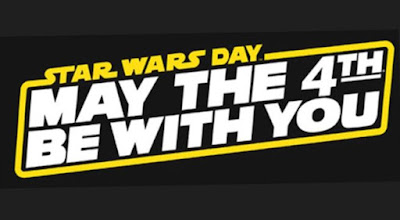 Have a great Star Wars Day Everybody 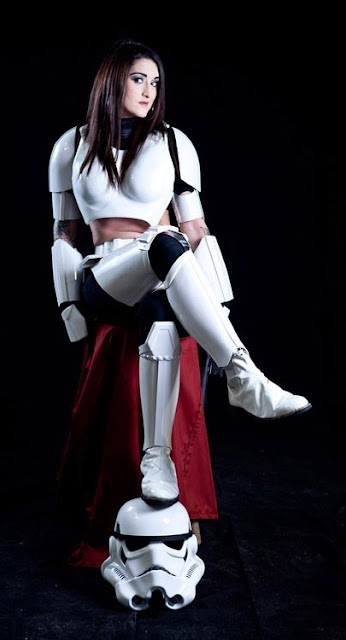