Last Thursday saw me host the first bout of my Gladiator Game - Ludus Gladiatorius. I, along with my two mates Nick and Callum took two gladiators each and fought on the sands for the glory of our Ludus.


I took Caladus the Secutor and Leonidus the Murmillo.

Whilst Callum had Aurellius the Murmillo and Acastus the Thraex 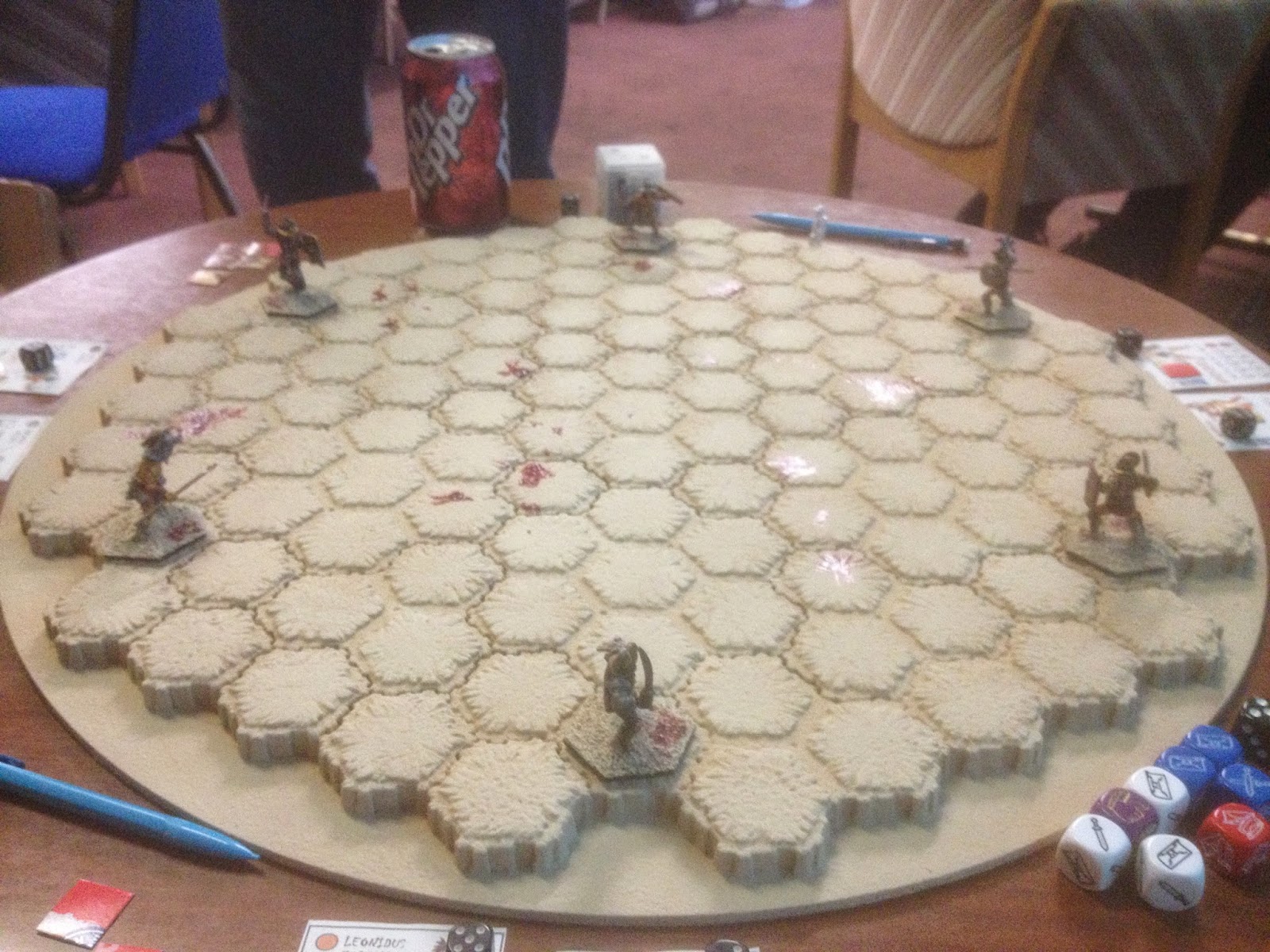 The gladiators set up randomly around the arena. 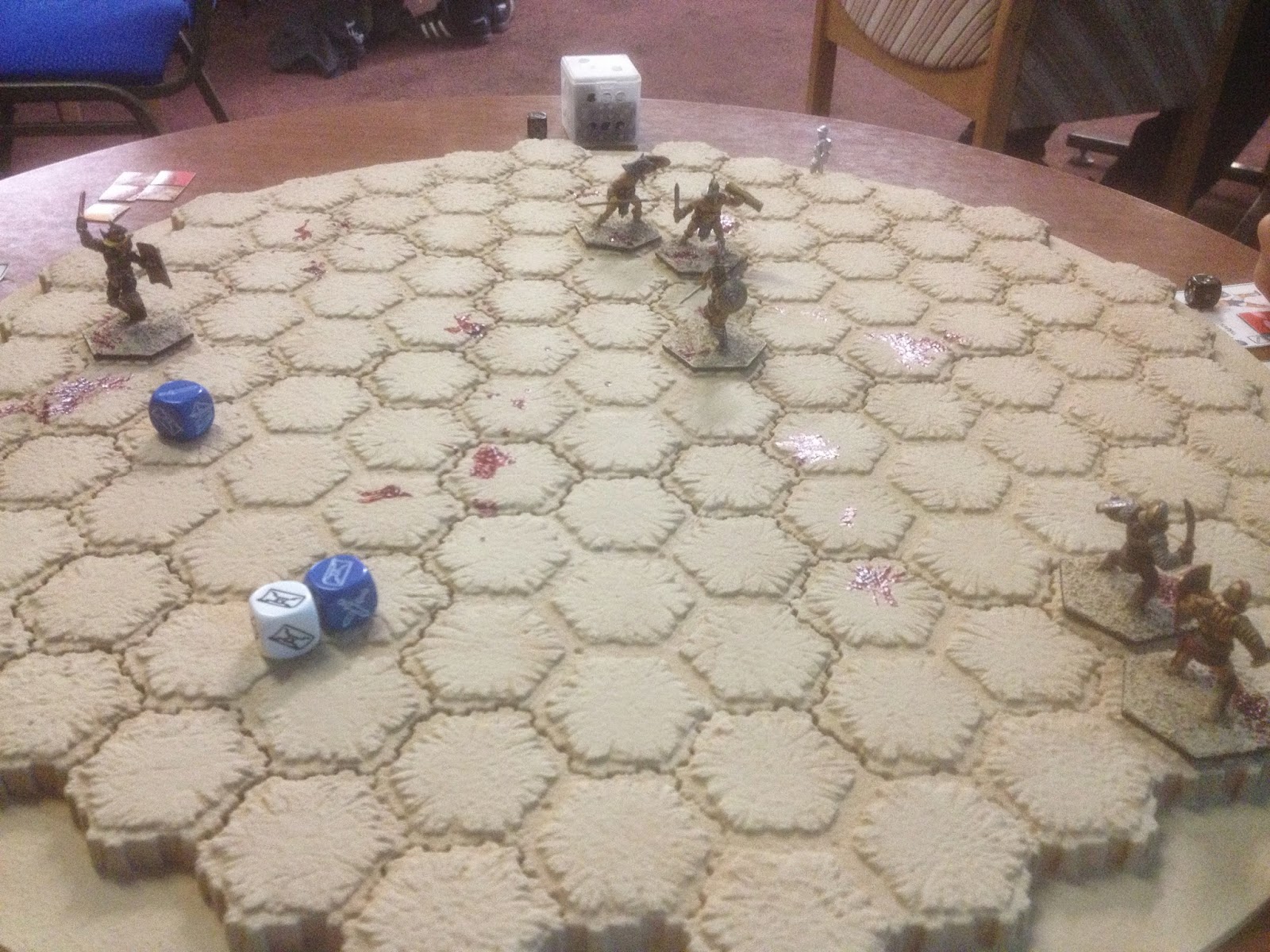 The first moves and attacks are made. Caladus makes a swift stroke in the rear against Acastus. Whilst Catigern gets attacked by Aurellius with Primus attacking Aurellius. 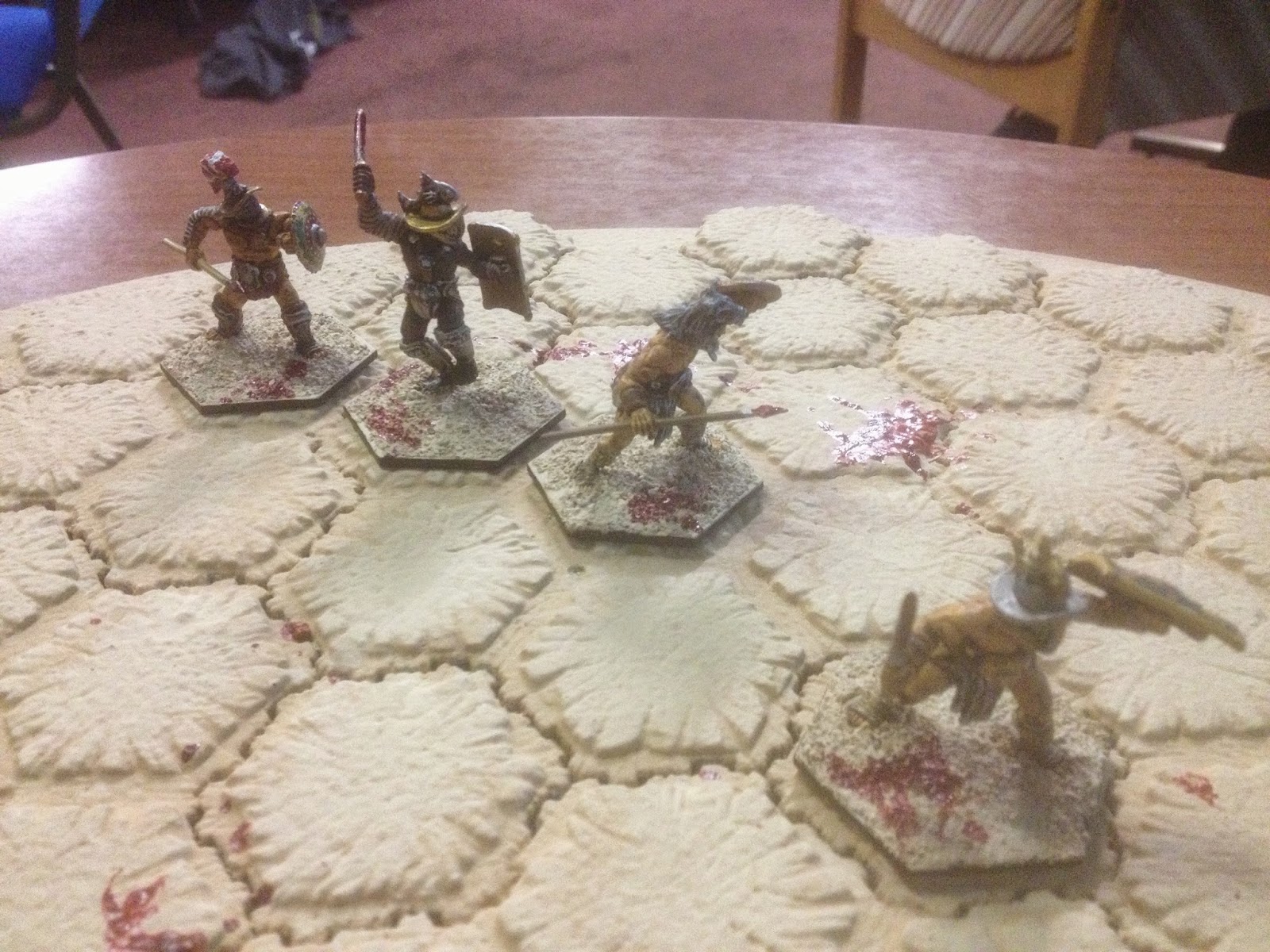 Catigern breaks off from the previous attack and moves to threaten Leonidus whilst the Murmillo is attacking Primus in the rear. 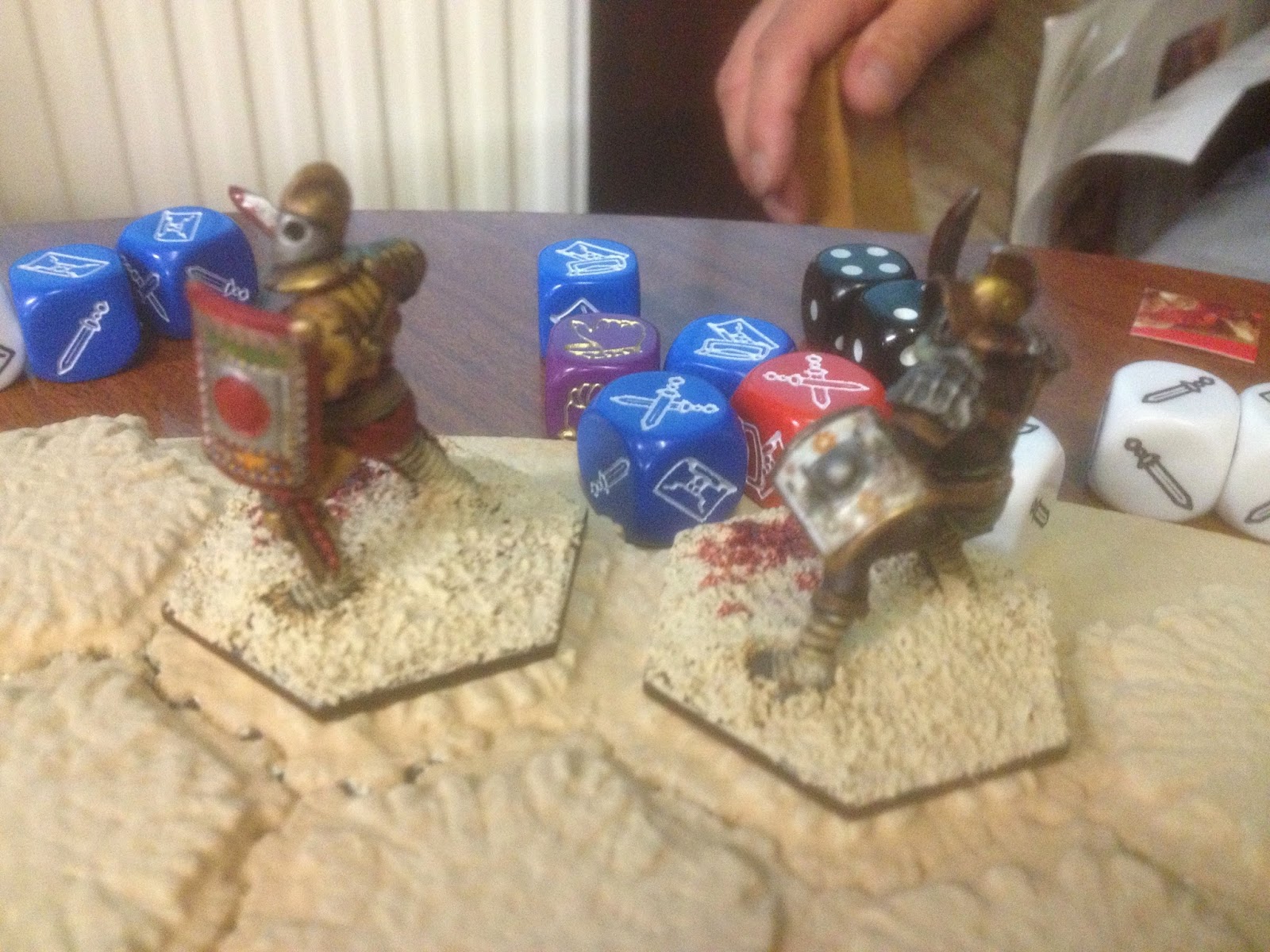 Acastus the Thraex manouvers around Caldus and hits him hard. 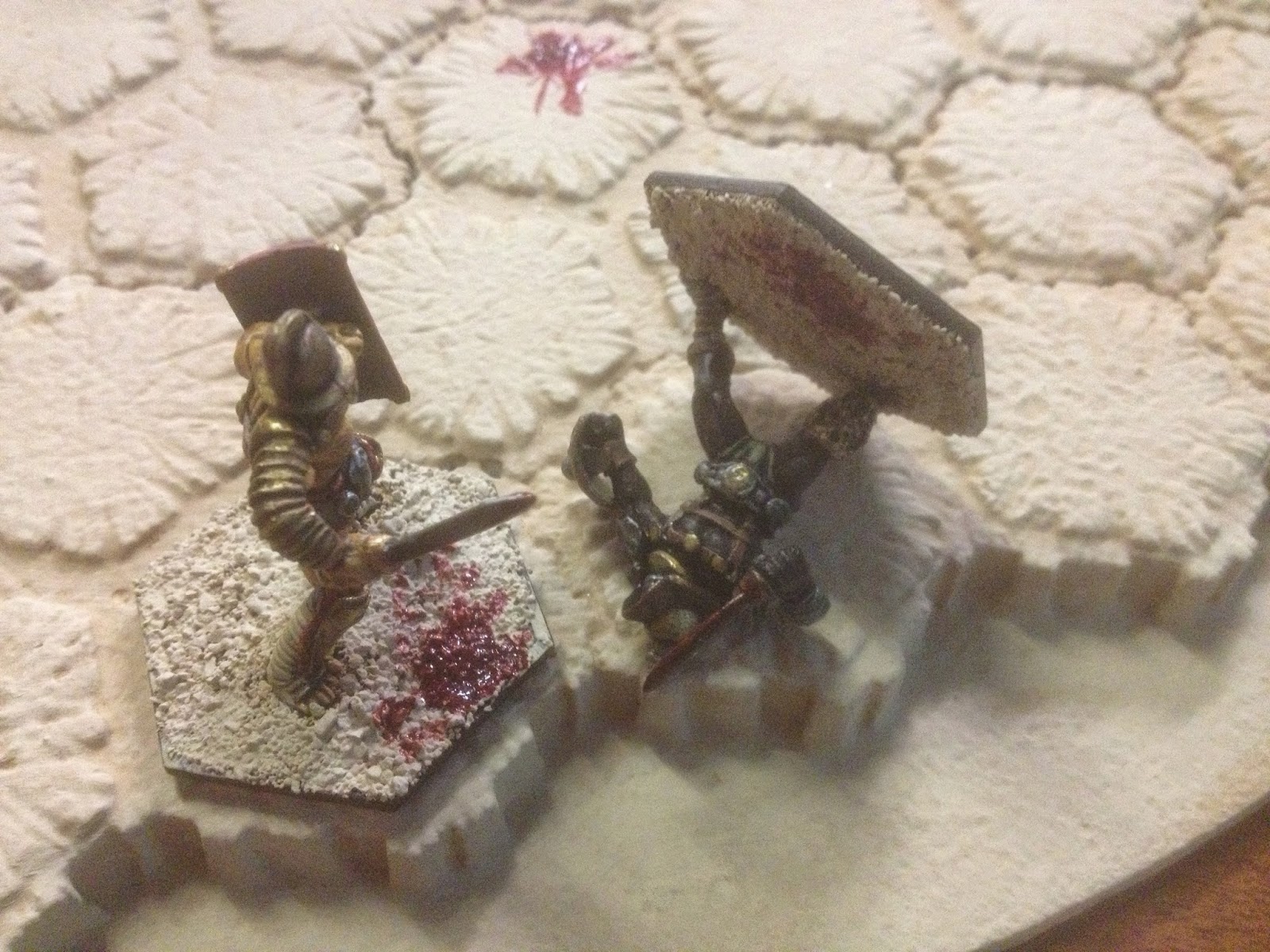 Caladus shrugs off the Thraex attack and retaliates, not only wounding Acastus but knocking him to the ground. 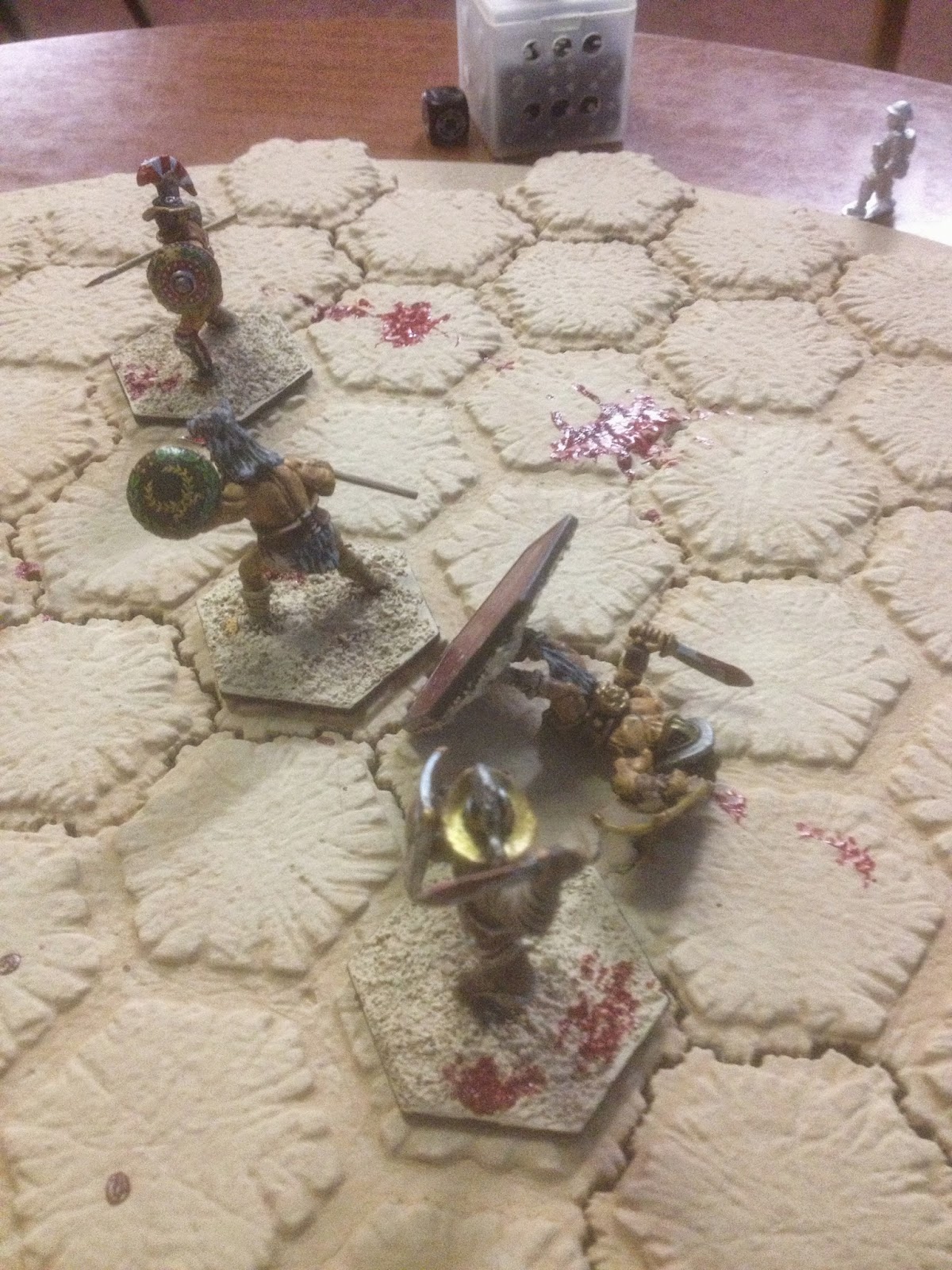 On the other side of the arena Leonidus attacks Aurellius Critically and  DECAPITATES him! Whilst Primus moves up to support Catigern. 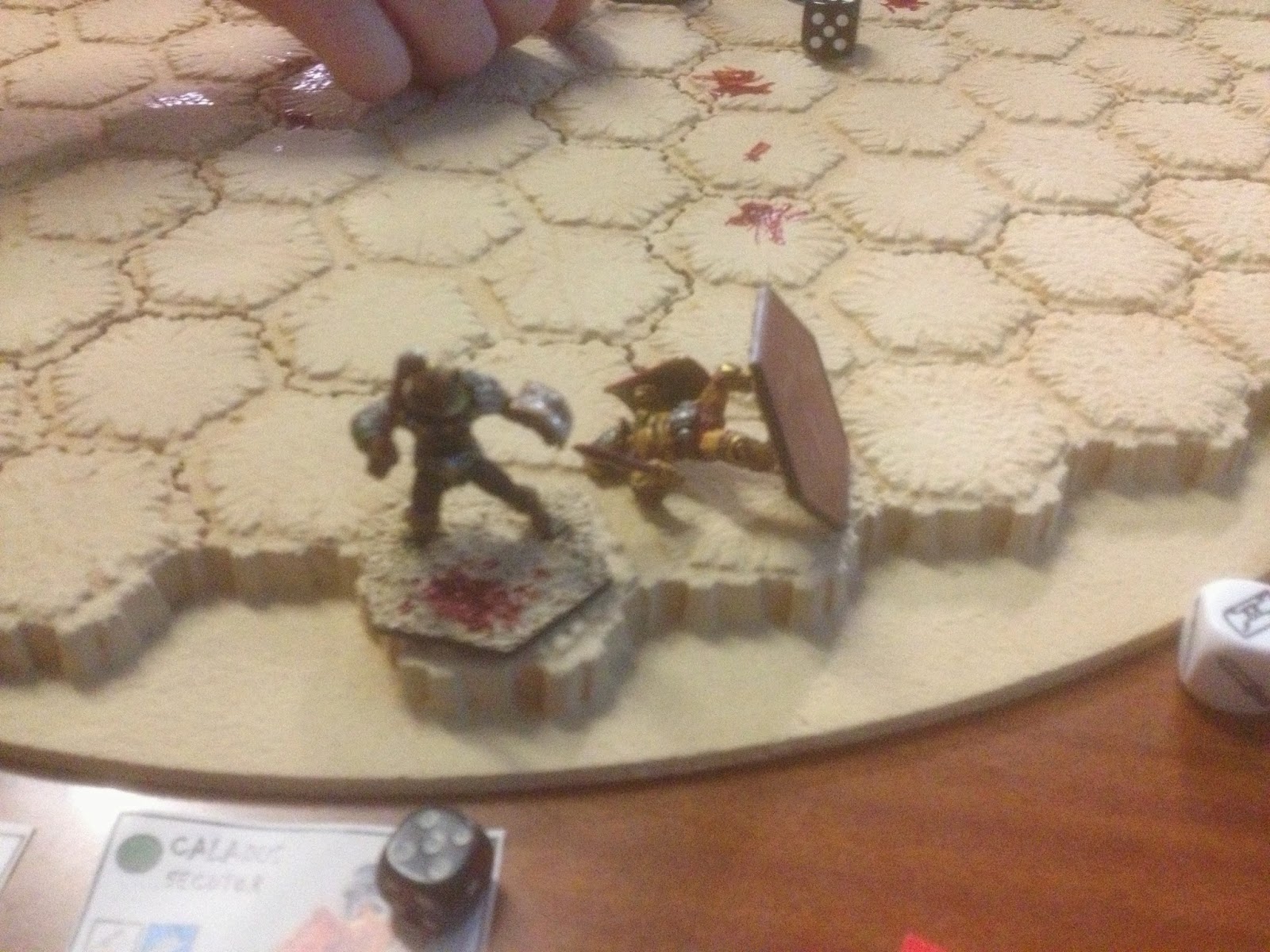 Acastus the Thraex recovers from been knocked down by Caladus and leaps to his feet swinging wildly with his sword and kicking sand in Caladus' face. Caladus is briefly blinded and overwhelmed and the Thraex's attack slips past his defence and DECAPITATES the struggling Secutor! 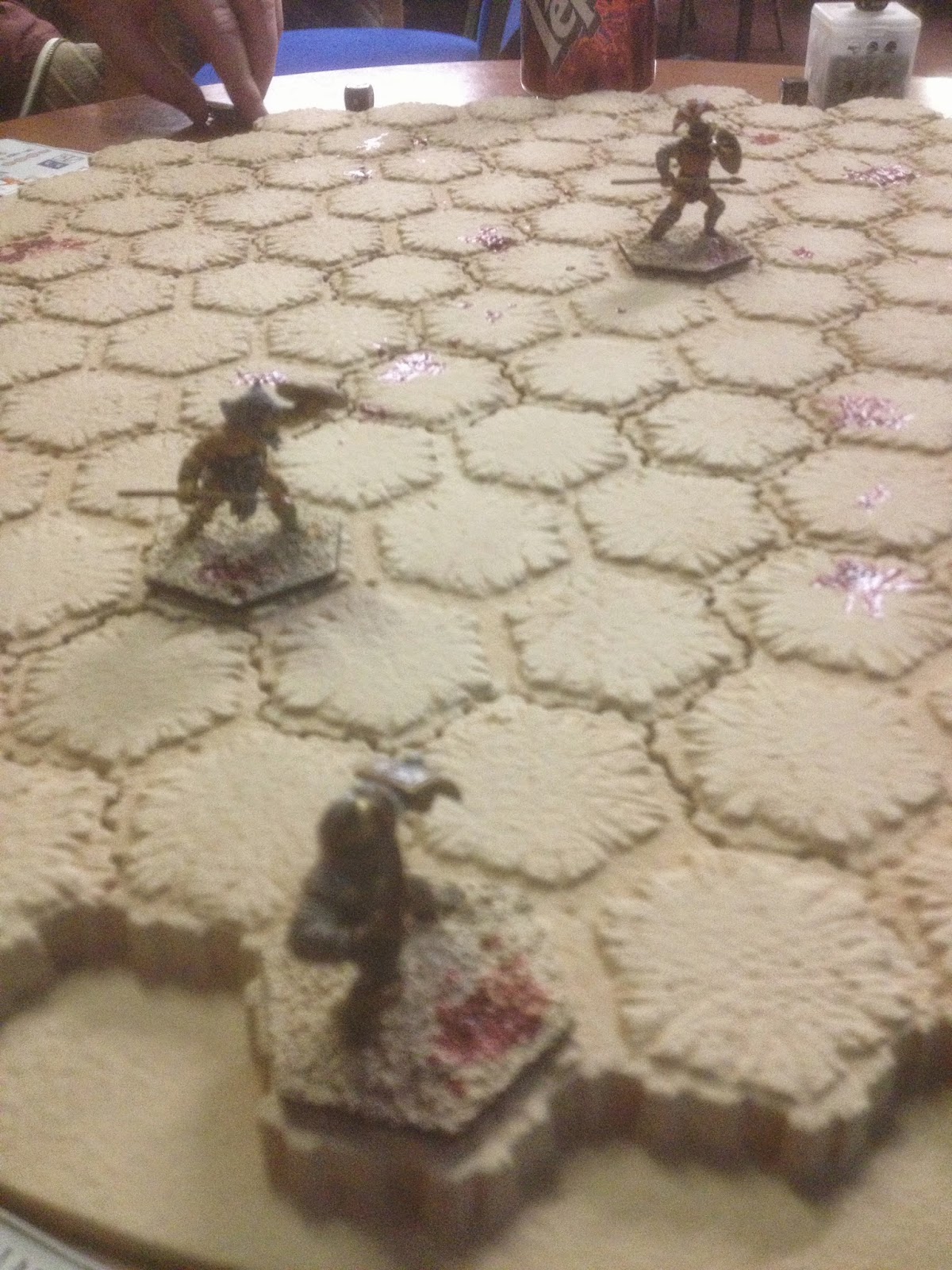 Whilst the crowd are screaming with excitment over two Decapitations, Catigern Severs Leonidus' left arm leaving him without his shield and bleeding heavily into the sands, this violent attack is quickly followed up with Catigern shoving his spear right though Leonidus's neck and resluting in the third DECAPITATION! of the night.
At this point my phone died so no more pics im afraid. The arena was covered in the spilt blood of three gladiators leaving Acastus to face off against Catigern and Primus.
Primus moved in and threw a javelin against Acastus grazing him and causing a minor wound. The Thraex retaliated and charged into the lightly armoured Velite and took him out in a Savage Attack. The Velite hit the ground and submitted. The crowd howled its approval and Primus was allowed to live.
Catigern attacked in revenge for his fellow gladiator but Acastus defended deftly. In return the Thaex managed to Sever the right arm of the Hoplomachus and then kicked him in the groin. The Hoplomachus collapsed to the ground and bled out from his severed arm.
Acastus was Victorius and took the laurels and acclaim dutifully awarded.
Posted by Carl at 15:38 5 comments: