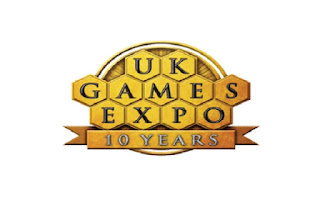 Last weekend I went to the 10th Annual UK Games Expo. For the last 2 years I have been and mostly worked demoing Bushido on the GCT stand. However thanks to a half term holiday I only got to go on the Sunday this year.

For the past couple of years the Expo has soley been hosted in the Birmingham Hilton hotel with an added marquee. This time though the hotel had mostly all the tournaments and the main traders/gaming show was in hall 1 of the NEC.

Wow did this make a difference. The hall was massive. Very cool even though the weather was baking hot. There was masses of space and getting up and down the isles to see trader stands and gaming areas was so easy.

In my opinion this show, although predominantly board games with a good few miniature games now getting into it, was miles better than Salute. Salute could look at moving to the NEC!! My only criticism would be that even though the show guide had a good map of all the stands similar to the Salute guide, the actual hall wasn't very well labelled or signed.

As with all massive shows the catering can be a bit of a nightmare but I always take my own food and drink, but I didn't take enough cash. Every cash point in the NEC was closed, no money to be had. Modern technology prevailed however with smartphones and PayPal!!

I got to play some cracking games, including X-Wing, Imperial Assault, a number of different board games which didn't really flick my switches and managed to get a game of Hawk Wargames new Spaceship game Dropfleet Commander, totally enjoyed it which is a good job seeing as I have pledged on kickstarter for a huge amount of the stuff.

One game totally stood out for me and this was Wotan Games forthcoming (via kickstarter) Norse Mythology boardgame - War of the Nine Realms. Played on a hex tile board which can be configured in numerous ways and can be 2,3 or 4 player it has a number of different factions including Vikings, Dark Elves, Norse Gods and Ice Giants.

I played the designer and got to have a great chat about the future of the game. The tactical levels and synergy of the different factions forces really make the game. 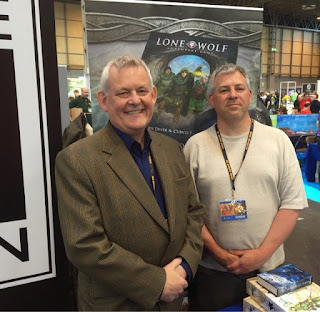 I really missed out taking any pics during the day but I did manage to grab a shot of myself with a childhood hero - Joe Dever, the designer and author of The Lone Wolf adventure books.

All in all a fantastic day out and here's the obligatory loot list and pic. 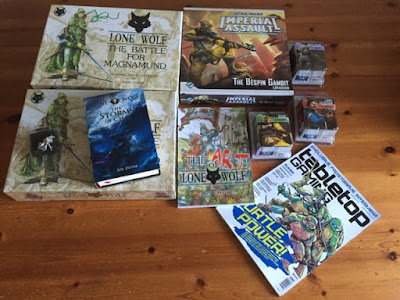