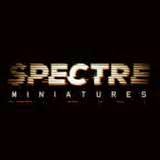 Spectre Miniatures was another Kickstarter I got involved with. Dealing primarily (to begin with)with the African theatre and Special Ops. They ran a very successful campaign and have managed to send out the miniatures and other reward bits on time (which is a damn site better than most kickstarters) 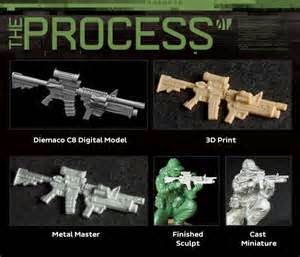 Spectre have gone the extra mile with their miniatures and rules, making sure that they are as close to reality as they can. The weapons sculpts are fantastic and so proportionate to the miniature that you dont have clunky oversized guns.

The rules centre on three tiers of protagonists (Elite, Professional and Militia) with differnt points costs for each along with weapon and equipment loadouts. This means you can have 4 highly tooled up Elite SAS troopers against 20 odd Militia and its a balanced match up.

Below are the miniatures I pledged for as well as the freebies such as weapon caches and High Value targets (to be used in scenarios) - crisp sculpts, next to no mold lines or flash, weapons are a bit thin but strong as I had to bend a few back and none have snapped. Very pleased and look forward to more from this range. 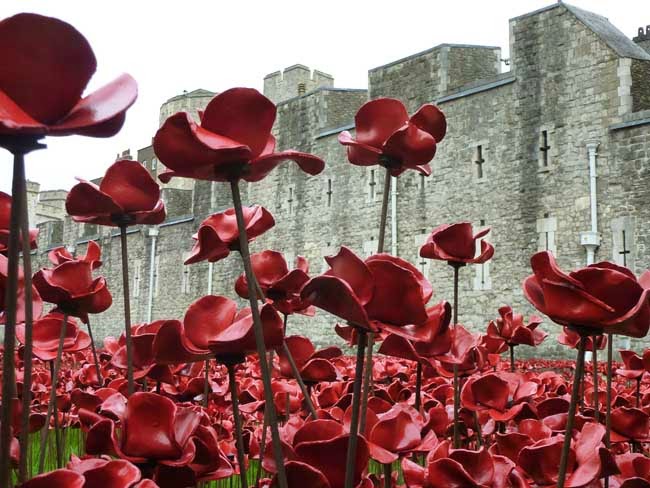 Everyone by now should have heard about the wonderful exhibition that has been on show at the Tower of London - I am referring of course to the ceramic poppys commemerorating the 100th anniversary of the outbreak of the First World War by artist Paul Cummins entitled ‘Blood Swept Lands and Seas of Red’. Over the past few months 888,246 ceramic poppies have been planted in the moat, one for every British and Colonial fatality during the conflict, a very moving and poignant sight.

Thanks to the Military I finally managed to get on a Force Development trip to the Tower to see this exhibit. Unfortunately as it was after the 11th November alot of the poppies had started to be cleared away, along with the cascade of poppies coming out of the window.

There was still a good number to see though as you can see in the photos below. 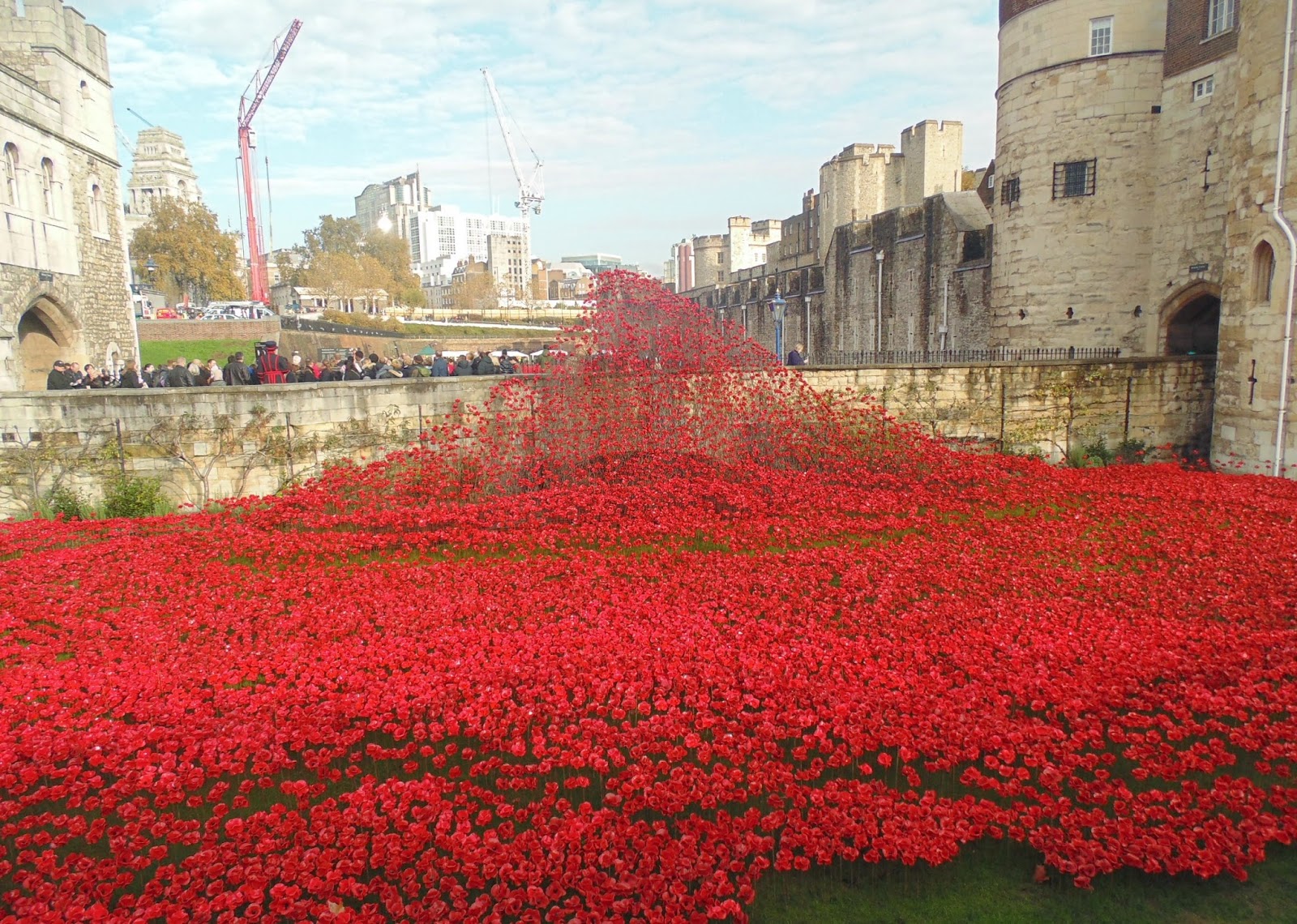 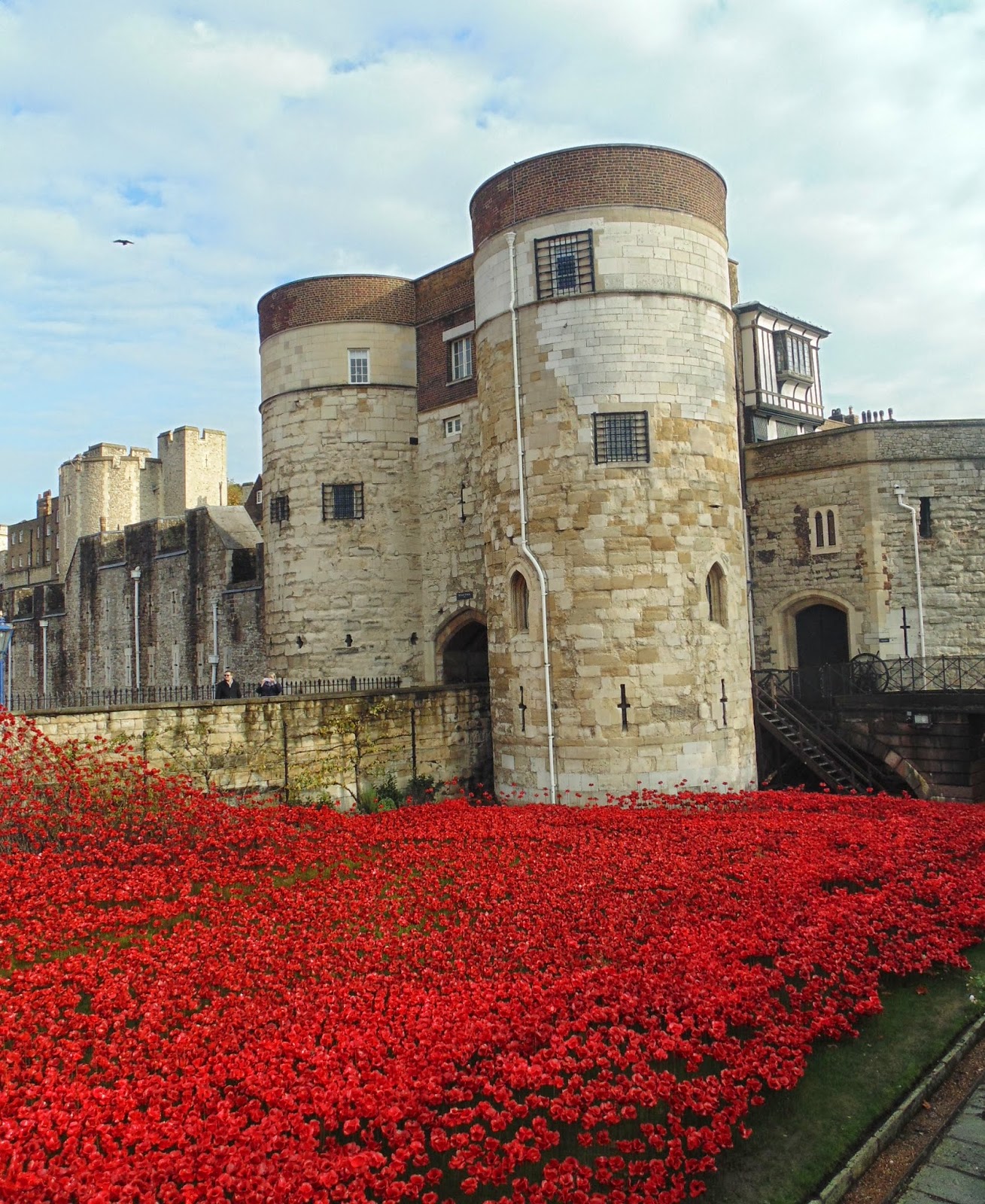 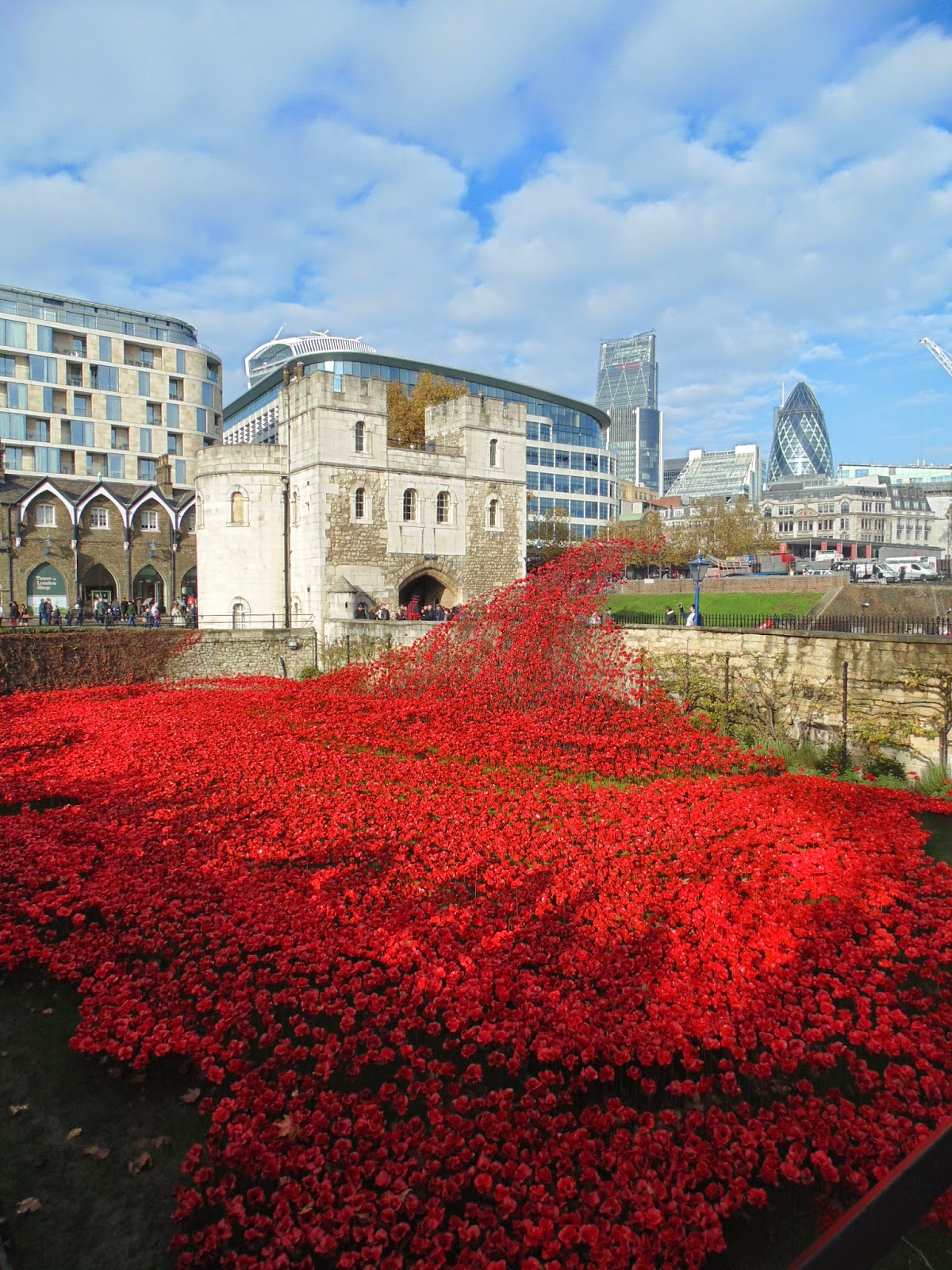 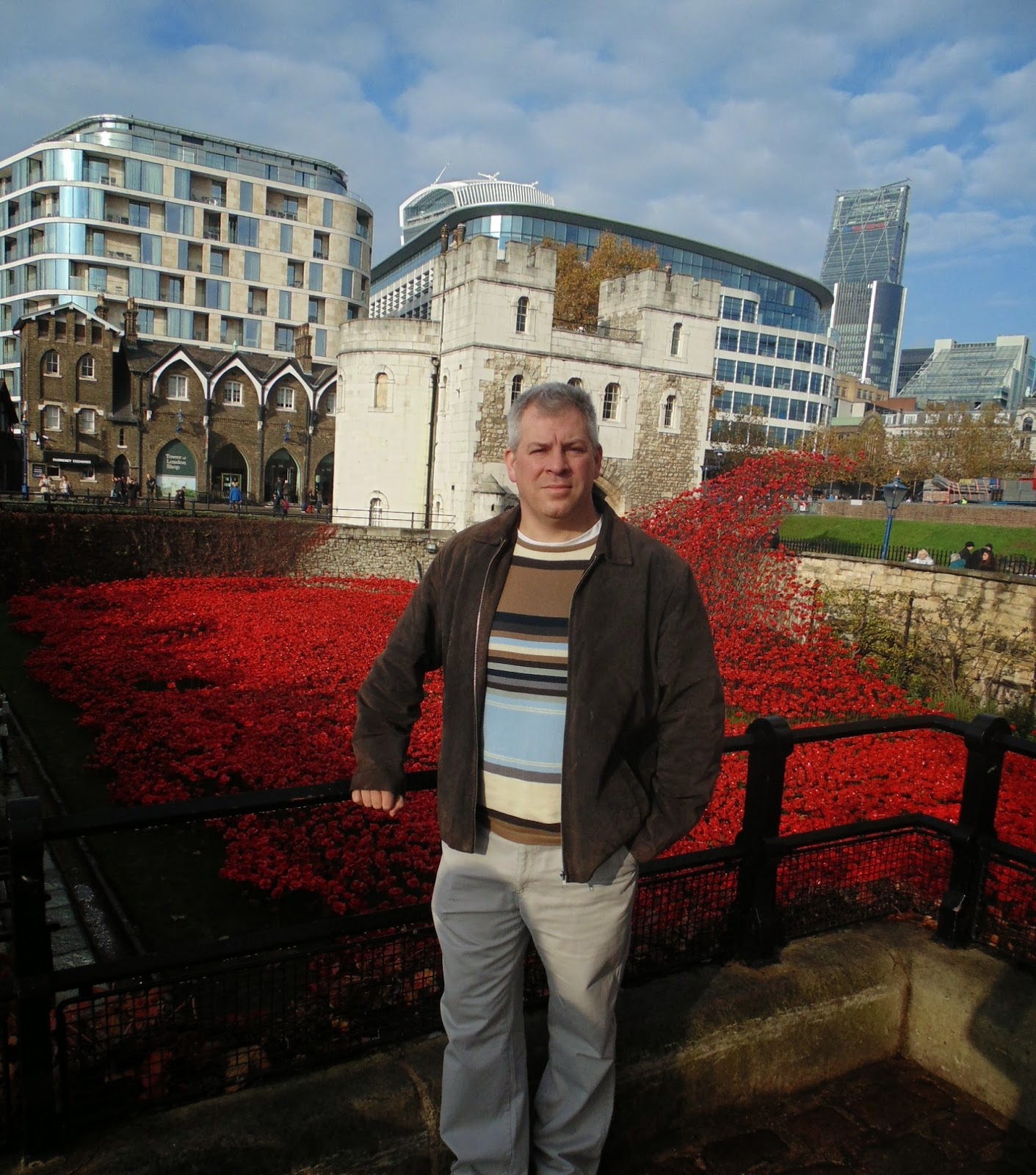 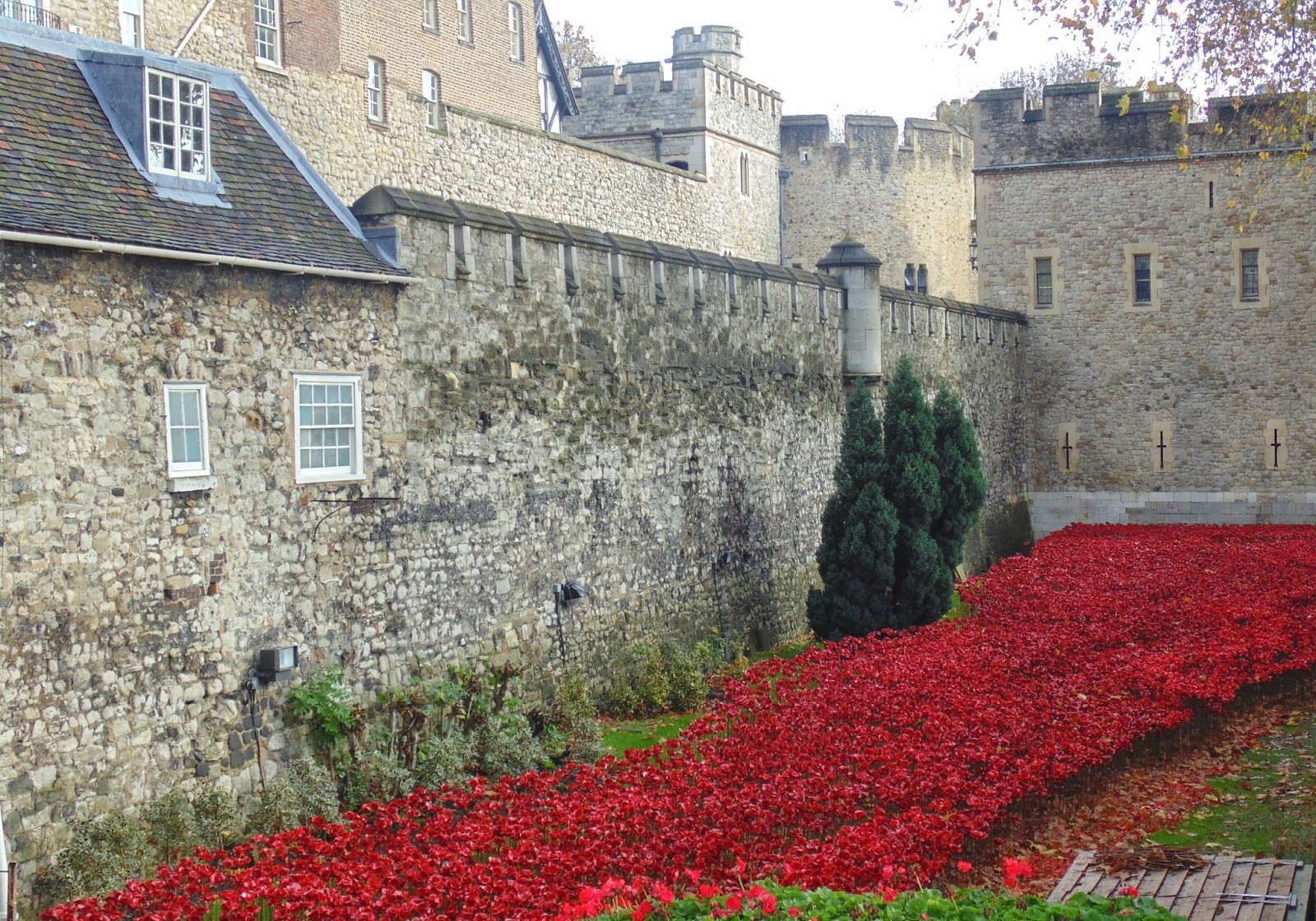 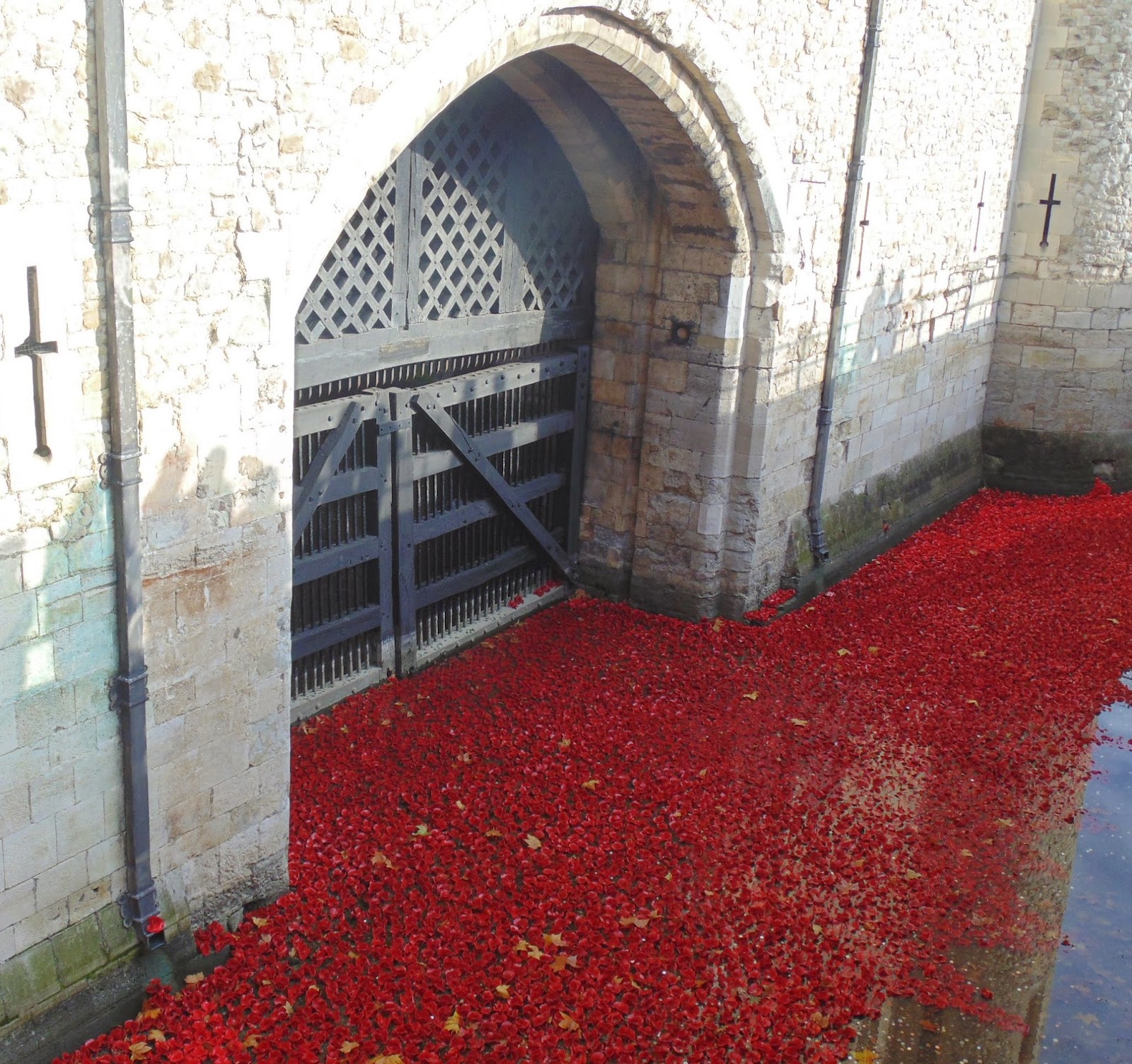 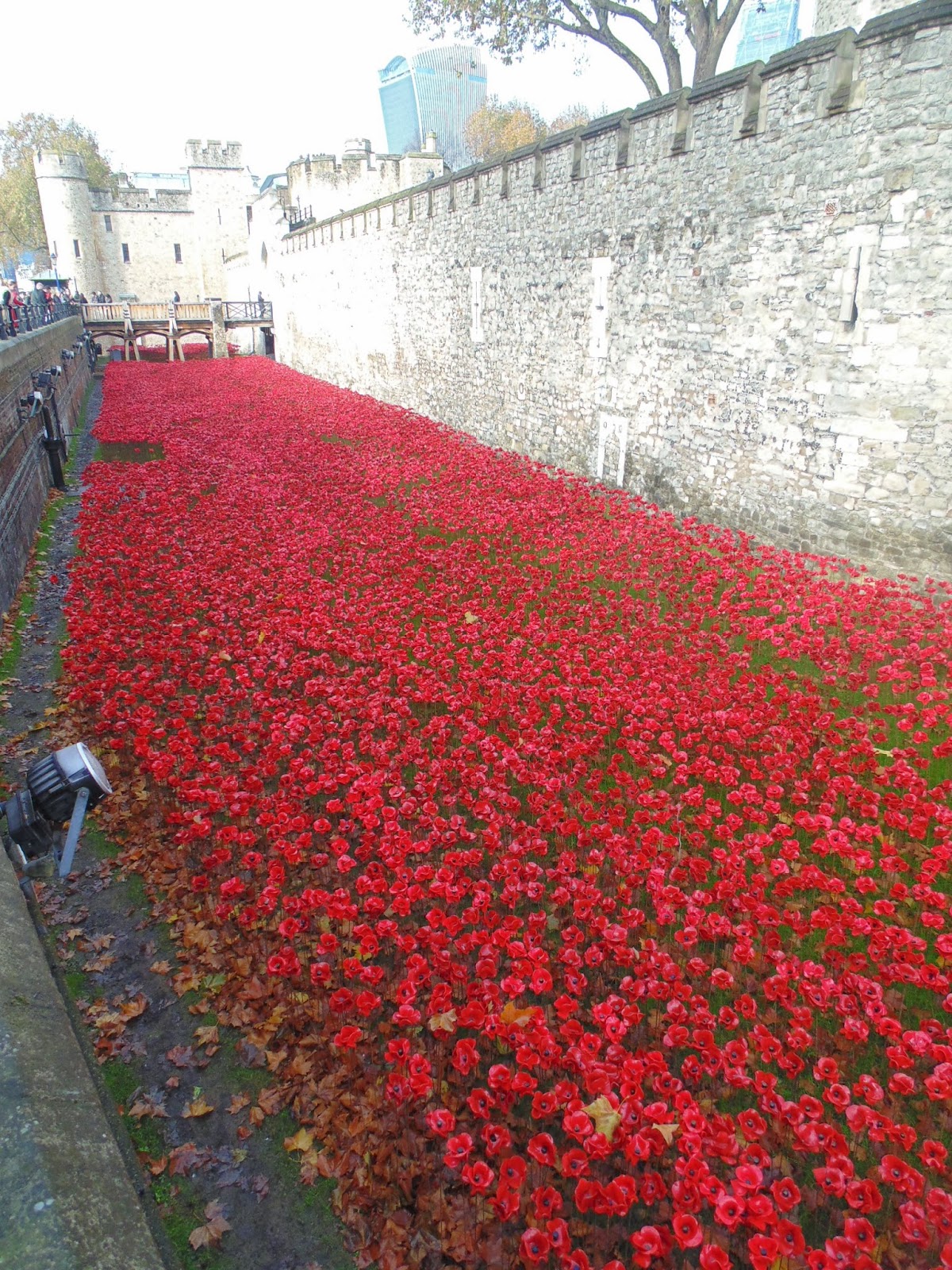 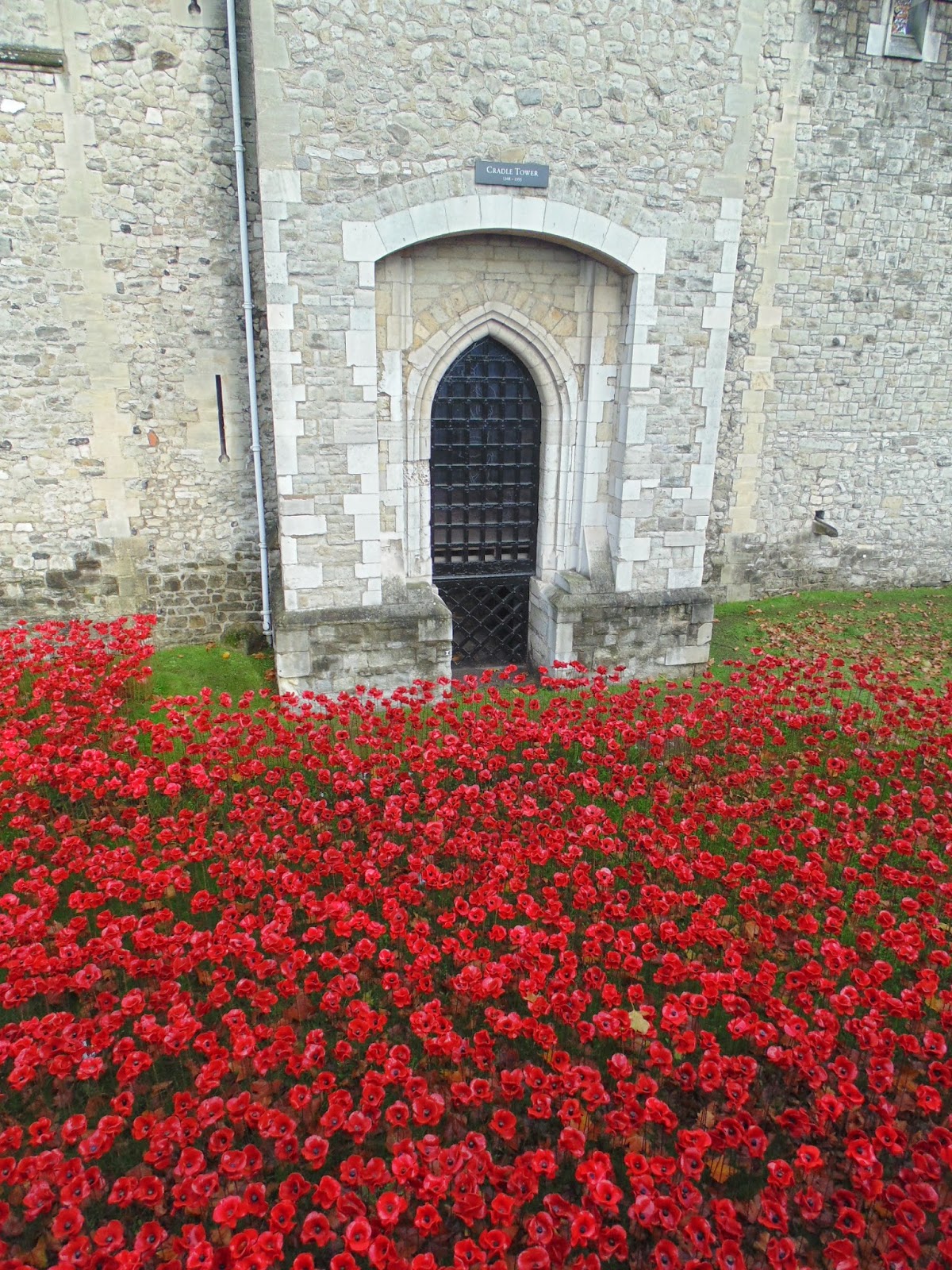 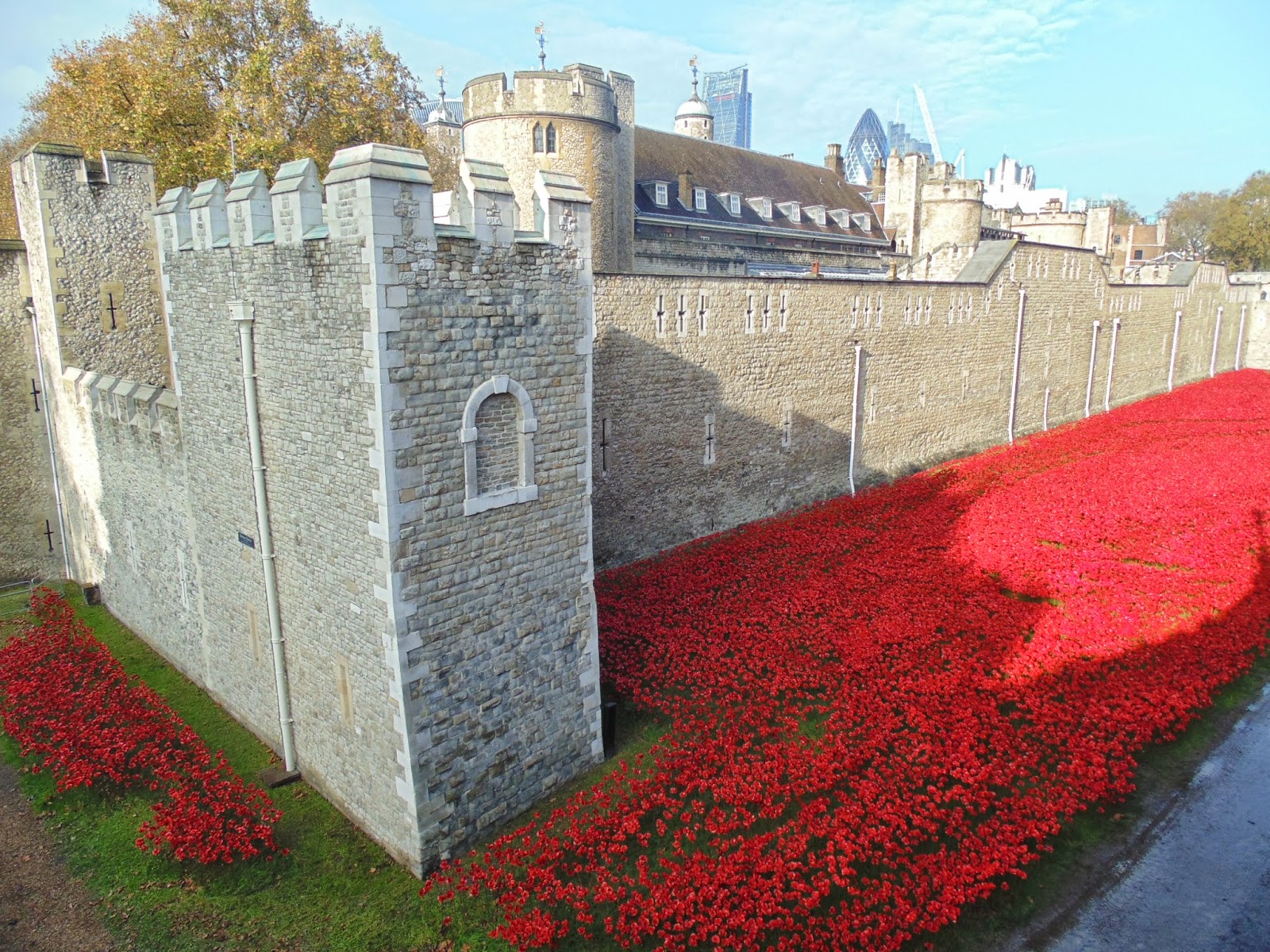 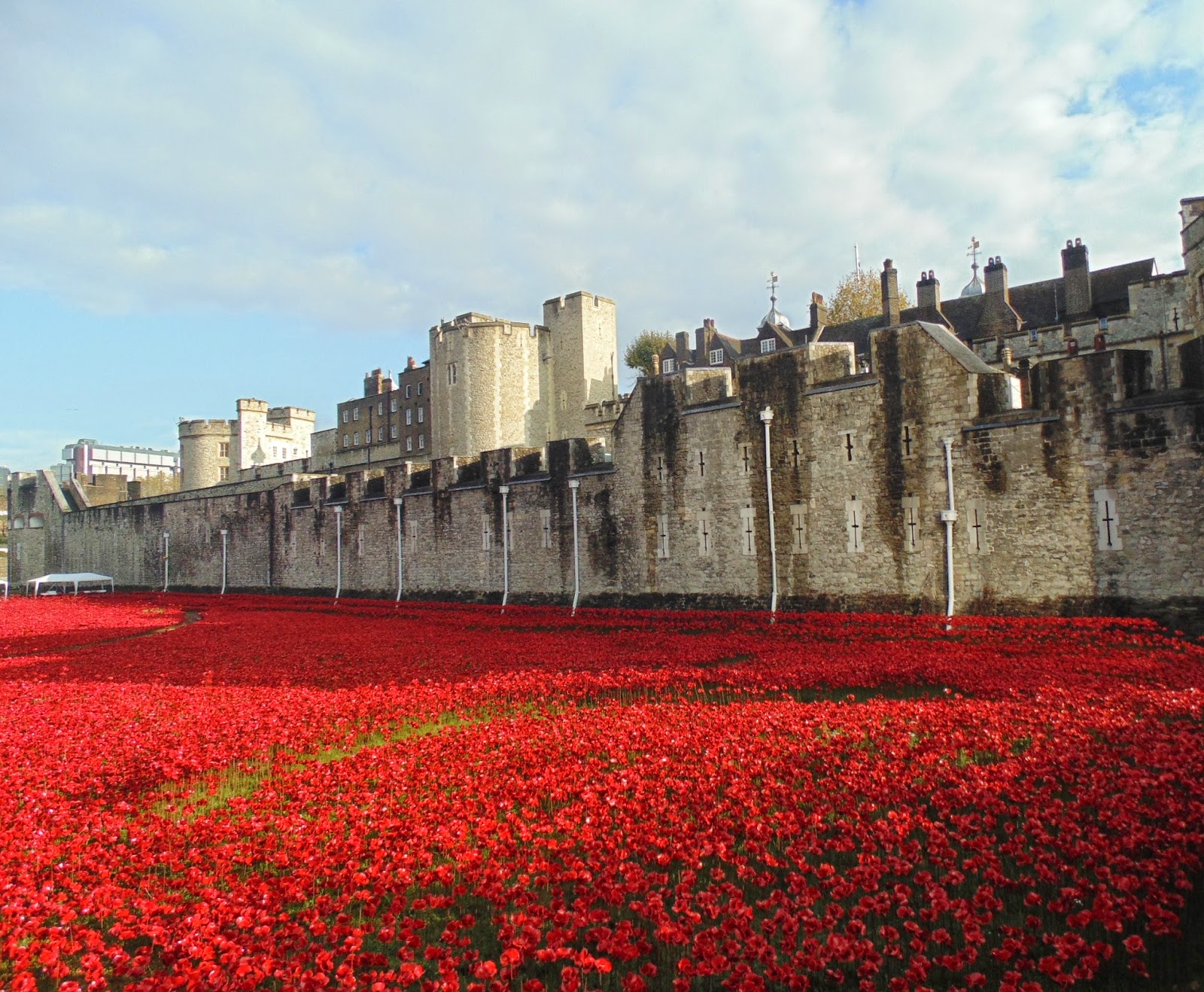 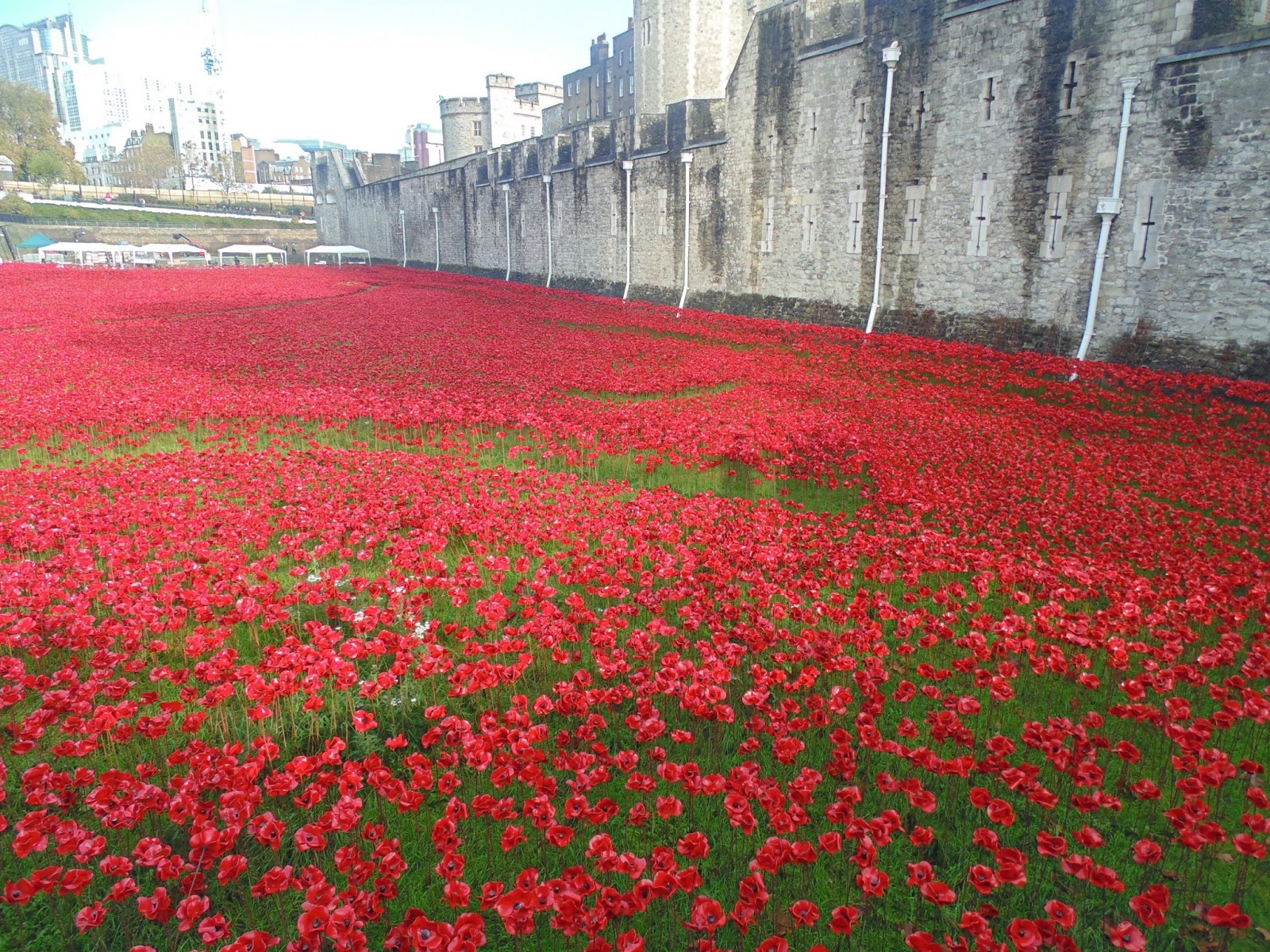 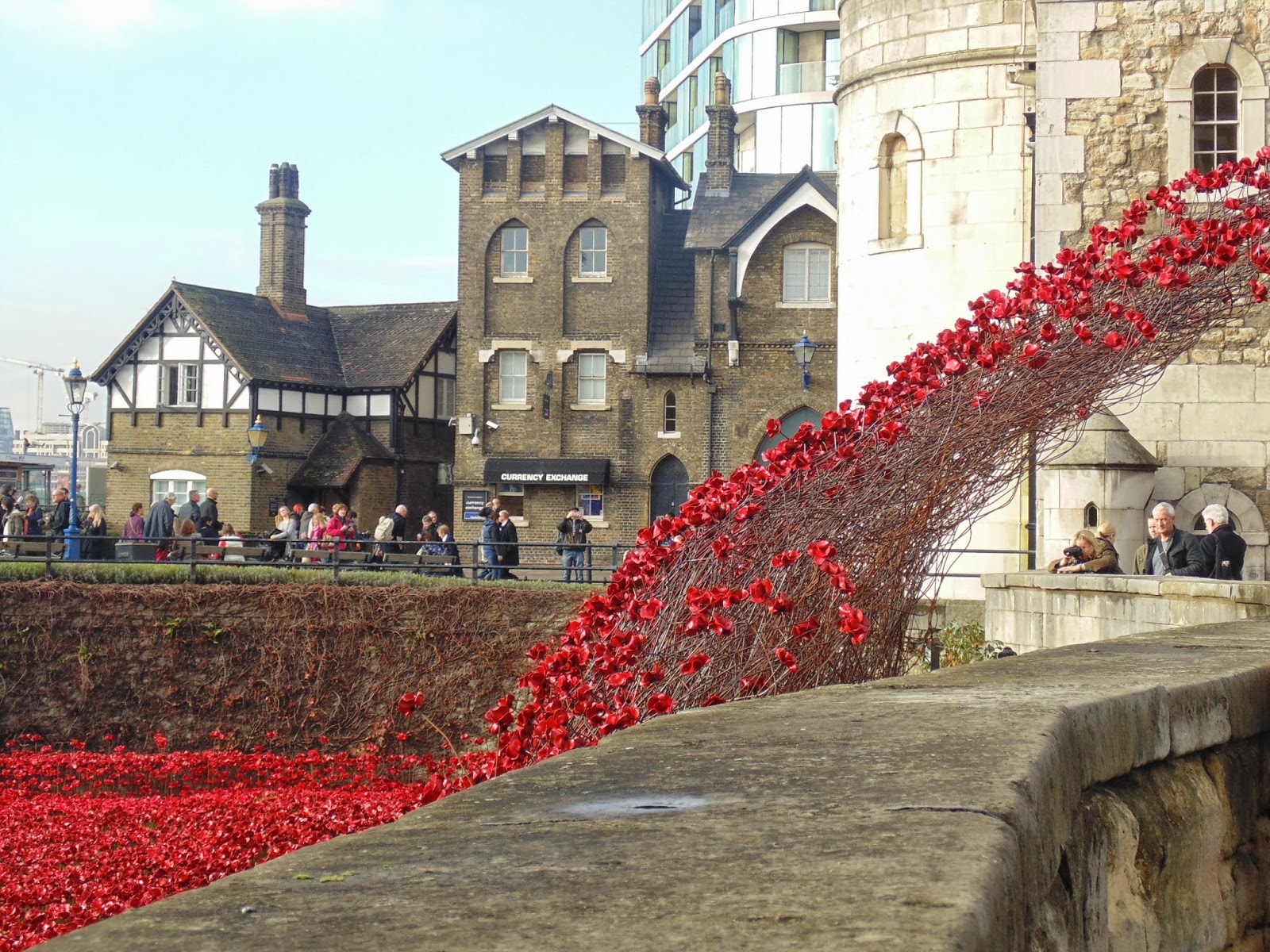 A very good day at the Tower and I was priviledged to be able to visit and commemorate the fallen.
Posted by Carl at 15:11 4 comments:

All Quiet on the Martian Front - Wargames Club Starter game 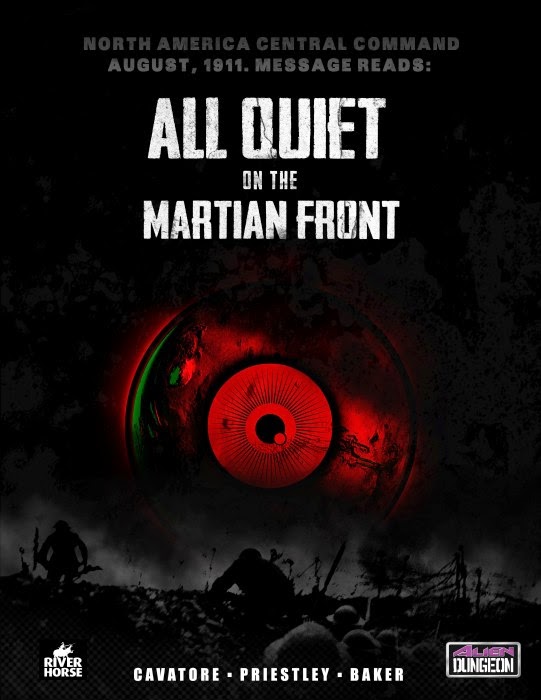 This game was played by my two good friends Nick S and Nick A at our wargames club in Huntingdon UK. I saw the All Quiet on the Martian Front Kickstarter and it looked like it was extreamly succesful - alot of new models and such have been released and available to buy, but as yet I have seen very little blogged or online in the way of people playing it.

So it was great to see the two Nick's trying out a starter battle.

Nick A had 3 x Martian Assault Walker and Nick S had a load of US Tanks with stands of HMGs, Infantry units, Roughriders on motorbikes and a Command Unit. Each Infantry unit had a forlorn hope section that could assault the Martians.

The US troops also had a rule where they can spend command tokens to bring back destoyed units as reinforcements. However, all this didnt make much difference as the Alien Death Machines heat rayed everything in front of them and march on with their invasion relentlessly.

A friend of mine Alex has been after a game of 7TV for a while and I thought I would offer something slightly different with another of Crooked Dice's systems 7TH Voyage. This system is near identical to 7TV but is set in the stop motion film and tv era of Ray Harryhausen amongst others.

So I set up a Jason and the Argonauts game with the scenario of recovering the Golden Fleece. I mishmashed it abit as anyone who has seen the film will know the fleece is protected by the Hydra. Well I havnt got a Hydra painted yet so laid out some temple terrain which housed the fleece and pitted the Argonauts against King Aeetes and his skeletons (mishmashed see as thats a completely different scene in the film

Alex took the Argonauts with Jason, an Argonaut and some veterans whilst I took the Colchis crew of King Aeetes with his warriors and some skeleton warriors that could be summoned. 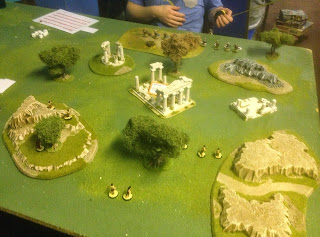 The two forces advance on each other 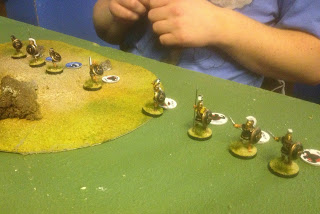 The Argonauts prepare to claim the Golden Fleece 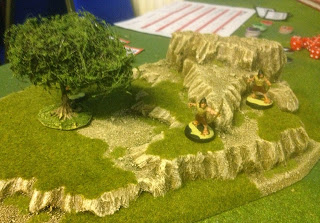 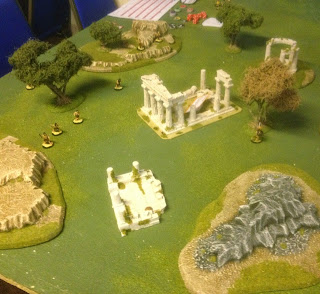 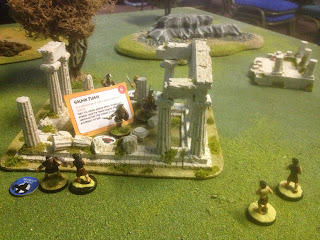 Clash at the temple 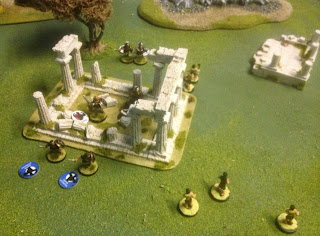 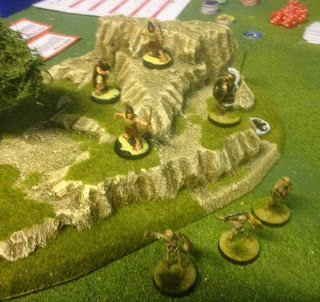 King Aeetes finally summons his undead soldiers to attack the Argonauts, whilst a Veteran charges in and takes out the archers 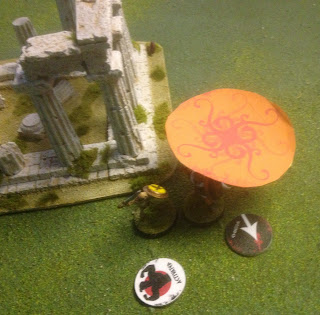 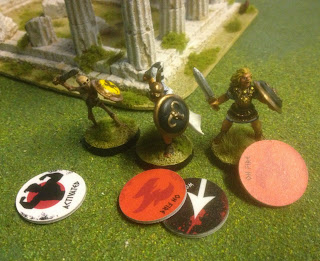 Pillar of Wrath causes Jason and an Argonaut to catch fire 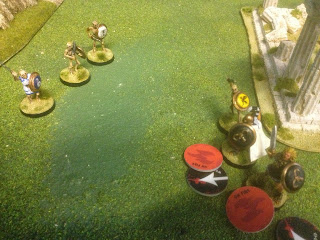 More Skeletons are summond and bears down on Jason (still burning)
Jason survives being burnt and manages to take out the advancing Skeletons and the game ends. Totalling up the victory points the Argonauts win a minor victory being in possession of the Golden Fleece.﻿