Skyrim on the Tabletop - Elder Scrolls Call to Arms

My new project just arrived and I am absolutely stoked! The models are fantastic and the game really offers the feel and style of Skyrim.

The Elder Scrolls: Call to Arms, is a new tabletop wargame by Modiphius (who also do Fallout Warfare) based obviously on the most popular version of the Elder Scrolls video game series - Skyrim.

The game offers two different game modes, making it a more interesting type of game and sets it slightly apart from most of its conventional peers.

You have the traditional Battle Mode, where players pit opposing factions against each other after equipping them with spells, gear and abilities based on a points-buy system.

This straightforward mode still has extras including levelling up heroes, gaining treasure and NPE (Non Player Enemies) that can spawn and attack both sides.

The other mode is Delve. This is a Solo (or Co-Op) mode where waves of NPE spawn and try and stop your merry band of adventures from completing the Delve (dungeon crawling and treasure hunting)

The NPE work on a AI type system, where they have a sort of flowchart of actions they carry out in relation to what the Delvers are accomplishing.

I cant wait to get some Tamriel terrain sorted and get these and my Dragon Born on to the table. 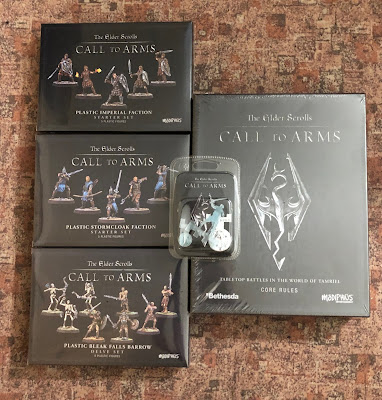