So as mentioned in my previous post about the ArcWorlde Weekender - one of the big games I played, involved my Albionnican Captain and his detachment of hardy Troopers, defending the small berg of Flammendorf from the rampaging incursion from a Massive Forest Dragon. Usually Dragons wouldn't approach large towns with an in house detachment of Soldiers - only with the recent conflicts between the Wild Elves and Beastmen causing the forests and mountain sides of the continent to shake, and the great armies of Albionnica called forth to march to the defence of their borders - the great Wyrms have been angered beyond reproach. 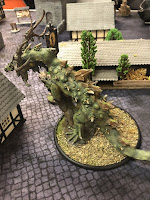 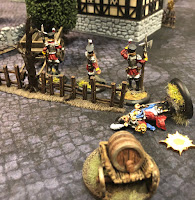 Hearing the deafening roars of a Forest Dragon, shaking the very tiles from the proverbial roof-tops, Capt Rhyme calls out his detachment from the 1st Battalion 33rd Regiment of Albionnica. His small group of valiant soldiers include three Crossbowmen from the Light Coy and three Halberdier's from the Centre Coy, under the command of Sgt Hageswell. With the Halberdier's taking up position on the right using a large townhouse and its garden as cover, the crossbowmen take a stance in the centre of the street, just in range of Hageswell's shouted orders.As the Dragon advances into town Capt Rhyme legs it across to the Halberdier's but trips over the traces of a small cart and embarrassingly lands up on his arse! 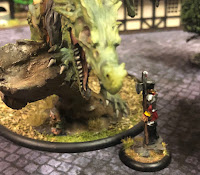 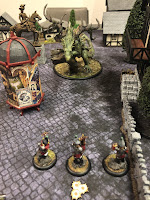 Hageswell screams at the Crossbowmen "Volley Fire!!" and a hail of bolts slam into the Dragons scaly hide. These opening shots are merely pinpricks to the massive creature however and it steadily advances. As the monster enters the town square a couple of the Halberdiers manically leap the stone wall they have been crouching behind and charge into the flank of the Dragon. The monster bellows in pain as the sharp hefty blades bite deep and hard into its side and great wounds are torn in its hide as the gasping troopers brace themselves for the monsters revenge. 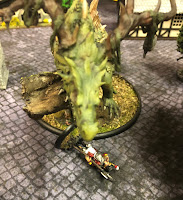 A revenge that comes all to swift. As the Dragon still bellowing in pain notices the red coated soldiers, it whips it tail sending one trooper flying as the other is shredded by its large talons. Seeing his soldiers begin to fall, Capt Rhyme orders an all out assault on the Dragon. There will be no hiding - no surrender, they will fight the monster to the death to prevent the rampaging creature from destroying the town. 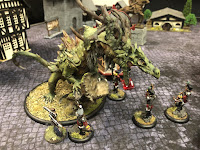 Again the Sgt's dulcet tones scream out "volley fire" and another hail of crossbow bolts hammer into the now wounded hide of the Dragon, like so many stinging metal bees.

Ichor is pouring out of the wounds of the creature but a wounded cornered beast is usually at it most dangerous. With no let up the Dragon slams another trooper with its tail and shreds a Crossbowman who unfortunately wandered too close to its claws! 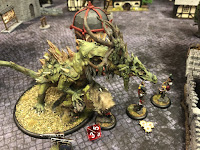 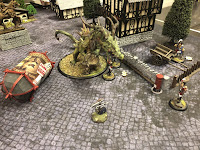 Capt Rhyme cocks his Arcloque pistol and fires an Arcanite infused bullet straight into the head of the Dragon. The Monster reels from the force of this new attack and lashes about in a frenzy. As much as this seriously wounded the Dragon it also caused it to wildly slash about and massacre a few more of Rhymes' dwindling troopers.

With almost its last vestiges of energy the Dragon climbs on top of the town squares poster pagoda and hurls itself at Sgt Hageswell, crushing the unfortunate SNCO under its weight.

Its now Dragon vs Man with Capt Rhyme the only surviving member of Flammendorfs defence force. Rhyme looses of another shot from his pistol and again the crystal studded bullet slams into the Dragons forehead - straight between the eyes.

The Dragon roars and with its last dying breath its dripping open maw of razor sharp teeth descend on Rhyme..........

Who deftly sidesteps away from the Dragon, which crashes to the ground and expires.

The Townsfolk, timidly peering from behind doors and windows see this and cheer Rhyme the Dragon Slayer!! breathing heavily, all Rhyme can consider is the letters he will write to the families of his fallen soldiers and the posthumous awards of valour they will be recommended for. 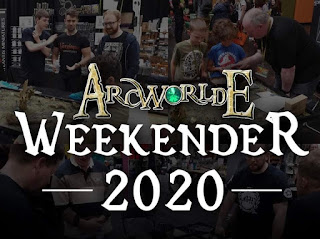 Helping Alex are his Mum Dawn, who sorts all the orders and posting of those lovely models and his dad Rob who does all the resin casting.

When you see the Dragons, Trolls and other monsters all cast in resin, you have to admit that Rob's casting is some of the best in the business.

Arcworlde has just seen a very successful Kickstarter for new miniatures and the Second Edition Rules and this Weekender enabled us lucky few who attended to an early collection of some of our Kickstarter goodies.

So arriving for the start at 11am on Saturday, I proceeded to catch up with Alex and his parents as well as some old friends and then we all got a run down of events from Alex.

The weekend would consist of painting workshops and tutorials. Basing tutorials - how to use greenstuff to sculpt basing additions as well as sneak peeks at forthcoming miniature sculpts and designs as well as being able to play as many games as you want on a number of fantastically put together gaming boards. 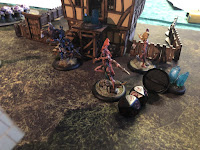 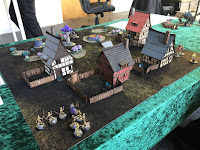 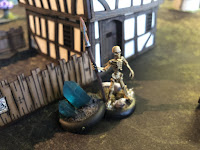 I spent most of Saturday playing a few small games and a large game using my Albionnican Humans taking on a Forest Dragon (I'll be doing a separate post on that game) but I did spend a small amount of time on starting to paint an Albionnican Ogre and finally finished thjs model on the Sunday in time for the painting competition.

I was really pleased with the paint-job I did on the Ogre Model, trying a few new techniques that I don't usually do whilst painting (I don't find painting that enjoyable anymore, mostly down to injuries causing pain) but unfortunately I didn't win anything as the standard of models submitted was extremely high.


Overall I had a fabulous time during the event. It's great catching up with old friends and making new one's and most of all having fun with all aspects of the hobby we love and enjoy.

Here's to the next event! 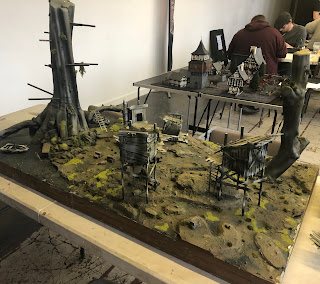 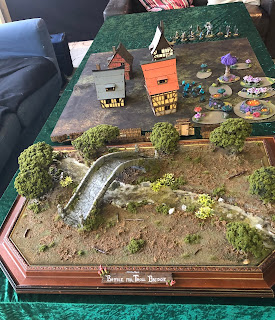 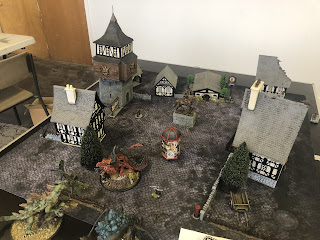 Some of My Models 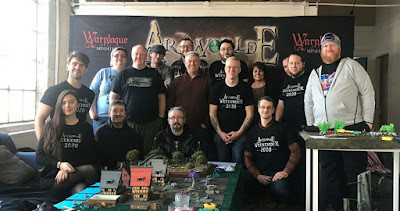