7TV - More colours of SPECTRUM (plus a re-base)

More colours of the SPECTRUM as promised, plus a little re-basing.

As much as I like the Micro Art Infinity bases that I started to base my SPECTRUM miniatures on, I did wonder if they were a bit too much. The majority of my 7TV/Spy Fi stuff is being based simply so it will all match, but I fancied doing something a bit different with the Captain Scarlet stuff.

Trouble was getting hold of extra bases as I have about 30 Spectrum miniatures and not enough bases. Antenocitisworkshop used to sell them and even though they are listed on the web site, are no longer in stock and wont be ordered. Maelstrom dont stock them either, and they are a pain to order from bloody Poland.

That coupled with the fact I had a nightmare over Captain Ochre and Orange bases I threw a girly tantrum and in the fit of pique went sod it and rebased the lot. You know what? I am happier now they are on plain bases  :)

Anyway here is the update. Captains Ochre/Orange and Indigo. I have gone with a Female Ochre as per the newer animated series (quite good in my opinion and shame was cancelled after 2 series) as well as Orange who was only shown holding a rifle (hence the conversion) at Blacks funeral and Indigo as a black, bearded agent again as per the animated series (as in the origional Indigo was shown only in civilian clothing.
﻿
And just to show the the others rebased.


Next in line are Colonel White, Captain Black, Dr Fawn and Lieutenant Green.
Posted by Carl at 09:47 2 comments:

Whats going on??? two posts in one day, have I been busy, blessed with the speed of a Cheeta with a paintbrush I hear you cry.  Why no. Its just whilst sorting through the buildings I have been making I came across my first 7TV cast that I had put together and realised I had not posted it for the masses to cor and go gooey over !!

So to dominate the world with their nefarious plans and evil deeds I present L.I.C.E (League of International Criminal Enterprises)

Born in Budapest and the illegitimate son of a Hungarian Woman and Lord Astley, Horatio was placed in an orphanage where he ended up being raised by the criminal underworld. On reaching his 20's Horatio managed to manipulate the stock markets and became the Millionaire mogul of a German based media company.
Using his influence and personal fortune, he now gains advantage for his nefarious plans, allowing the L.I.C.E network to reek havoc around the world, whilst using his media contacts to gain the first story.  Some wonder how his journalists can always be on hand as soon as these events happen. Thats because the scandle and disasters are caused by the very same journalists as L.I.C.E agents.

An ex-member of the feared Russian counter intelligence agency, Luydmilla has a reputation for overseeing the interrogation of enemy agents. Which after torturing the target, she speaks to them in a warm motherly tone to extract information. After an internal scandle Luydmilla was out in the cold. Bitter and vengeful she gravitated towards the underworld and became involved with L.I.C.E. She is now the right hand of the malicious industrialist Horatio Silas.

Drakus is a brutal killer. Originally involved with the drug syndicates in Marseille and Venice he eventually became an enforcer in the Budapest underworld, before being emplyed by L.I.C.E. He was arrested and sent to prison shortly after, however he broke out after strangling his psychiatrist. Drakus is know to leave a dragon pin on his victims after killing them.


L.I.C.E being the worldwide evil regime it is, needs scores of willing minions to keep its day to day operations going, as well as numerous expendable minion troops to protect its assets and to carry out attacks against designated targets.

As previously posted, along with the Sarissa Warehouse, I had purchased a load of Warbases Terraced Housing as well as a Shop and a Pub.

I have since completed the first 3 houses to make up my street.  I angled the houses to try and reduce the glare from the kitchen window, but now looking at the pic I think it makes them look sque-iff. 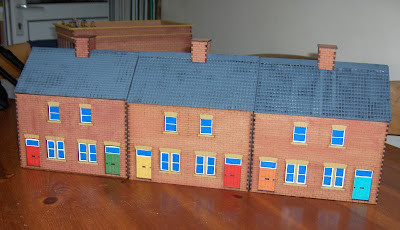 Photos always seem to bring out the imperfections in models/terrain etc.. as they were sat on the table I never noticed that the end house could have done with a bit more paint on the roof!

Hopefully next week, with a couple of days off I will be able to update this again with a few more houses, so it will actually have two rows and the rear yards should be complete as well.
Posted by Carl at 15:05 1 comment:

I have been incredibly impressed of late with the abundance and quality of the pre laser cut MDF terrain and buildings that various companies have been producing recently.

Two main suppliers stand out though and these are Sarissa Precision who produce some great terrain for both Sci-Fi and Wildwest settings as well as City Block buildings, including a fantastic Warehouse. At £50 it is an expensive piece (well lots of pieces really) of MDf but you can see from the pictures that it is in my opinion well worth it.

﻿
The next company is Warbases who do a great range of terraced housing that can be used for any period from Victorian era to modern day, incorporating VBCW, WW2, 1960's etc... great for setting up a street for the Daleks to invade or for a certain 7TV Spy-Fi studio to shoot their episodes.

Not found many problems with these buildings so far. The only critism that has been afforded towards them has been from my non-wargaming, non-geek understanding wife - she says the buildings stink. She just doesn't understand the burnt woody goodness you get from opening these. Its like that new box smell when you open a new boardgame!!! 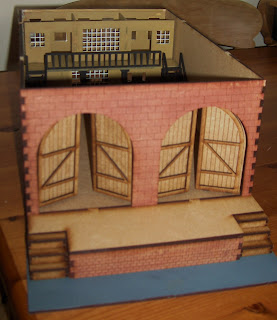 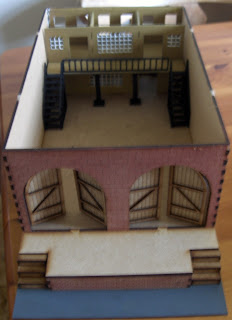 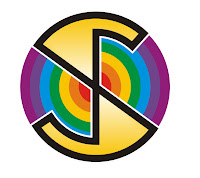 I have had 3 days off work and with having some me time, got down to some painting as I have been struggling of late with my enthusiam for painting. I suffer from a severe spinal injury and the pain it causes ruins my ability to paint for prolonged periods.

Which as a very slow painter causes untold misery.

Anyway I have finally managed to make a start on the wonderful Not Captain Scarlet/Time Lift Security miniatures from Crooked Dice and sculpted by the marvelous Ian Mountain. 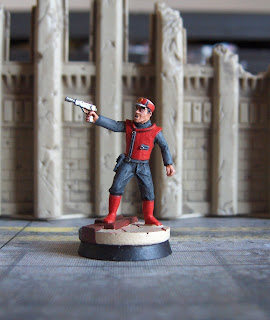 The start of Spectrum 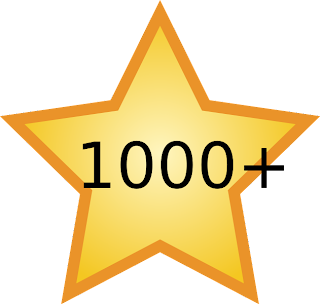 Just a quick post to say thank you to everyone who has visited this blog and taken me over 1000 hits already.

I started out with this just over three months ago and it was mainly selfish as I wanted an easy way to list and catalogue certain elements of my hobby and keep a photographic record of what I paint. Being an extreamly slow and average painter of minitures it was also a sort of arse kick as well if I put up a project list, to push myself to finish the mountain of lead and resin!

So again a huge thanks to everyone who has taken the time to visit this small, infrequently updated little blog and although it may not seem especially meritorous to the mega bloggers I am actually quite chuffed today.

Well with the weather being awful here at the moment and having a few spare days, I thought I would start on the Naval contingient of my Prussian Dystopian Wars fleet. 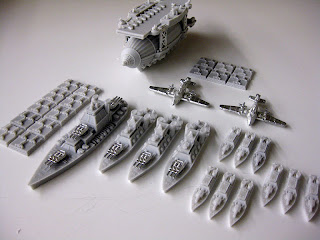 This fleet is comprised of the Prussian starter box set as pictured on the left. I also have the Imperium Sky Fortress as pictured along with 2 x Pflicht small Zeppelins and 3 x Jager small fliers. I have just order a Rhine Carrier a Blucher Dreadnought and a Gewitterwolk Zeppelin to add to the fleet.


So after nearly 2 days solid painting here are the finished ships so far. 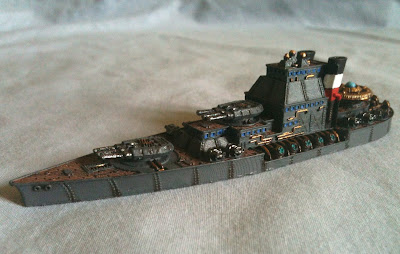 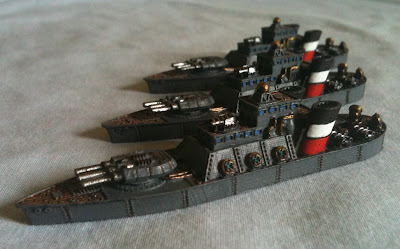 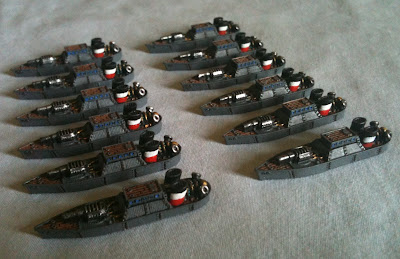 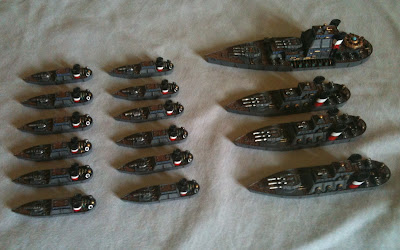 I will be starting the Dreadnought and the Carrier as soon as they arrive and then next in the painting queue is the whole Air element of the fleet.﻿