This year at Salute, Battlefront had advance copies of the new WW2 skirmish game TANKS by Gale Force 9 along with blister packs of their Wave 1 Tanks.

TANKS is an easy-to-learn, quick-play, small-scale game, where you take command of a tank platoon, seeking to destroy your opponent’s tanks and secure victory. TANKS is a flexible game with lots of ways to create a finely-tuned army that fits your play style.

In a similar vein to Star Wars X-Wing, TANKS lets you choose your forces each with a points cost that you can then supplement with crew and equipment. Each Tank has an Initiative value Firepower rating, Armour value and Hull points very similar to Initiative, Shields, Attack etc in X-Wing.

So what do you get in the TANKS starter set. The box is thin card but very nicely illustrated and contains the following components.

Complete components inside the box

Rule Book: The Rule book. Thin and very basic rules outlining the make up of the stat cards, movement, firing, defense, cover and building your Tank platoon. The book is beautifully illustrated and contains numerous examples of gameplay as well as a quick reference sheet on the reverse and assembly guides for the tanks included in the starter set. 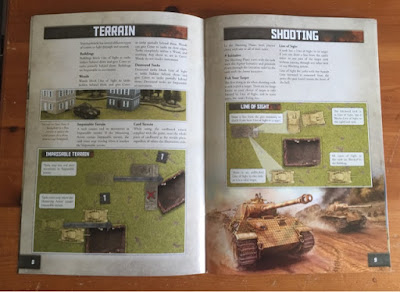 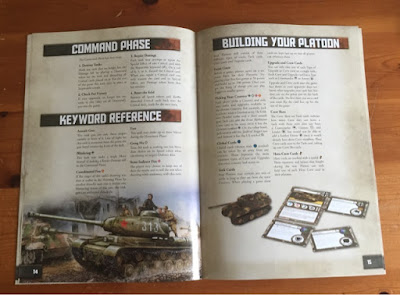 Tank Sprues: These are coloured plastic (Green for USA and Dull Yellow for Germans) and identical to the plastic tanks already available for Flames of War. Included are 2 x Sherman's for the USA which can be assembled as either a 75mm gun version or a 76mm. As these are identical to the Flames of War vehicles, numerous components are available to adapt the look of your tank i.e uparmoured attachedments, 105mm gun etc. Extreamly well detailed and go together very simply. 1 x Panther for the Germans. Another great kit and this can be built either as a Panther or a Jagdpather Tank Destroyer. Again extra components are included on the sprues. 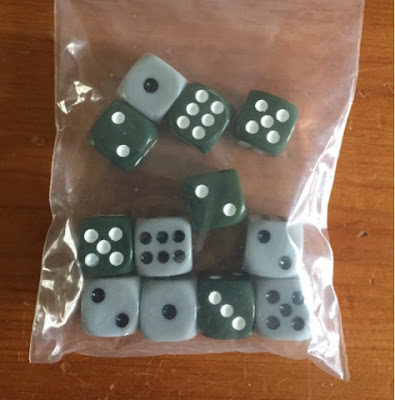 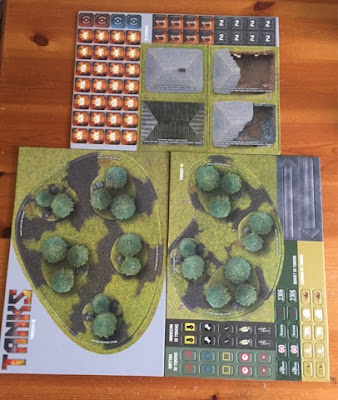 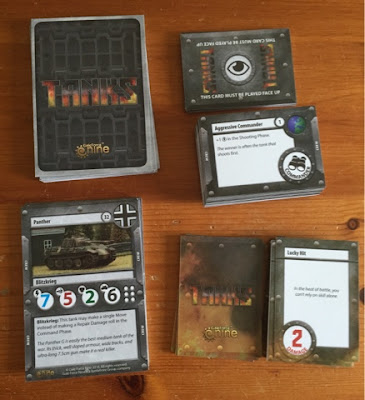 Overall, for £18 for the cost of the Starter set, I think this is a fantastic little game which could be expanded exponentially and I have already obtained a number of extra Tanks which were released as Wave 1.


It wouldn't be right not to have the annual Salute loot post, so here is my pile of gaming swag for this year.

Another year another Salute and first off I enjoyed this year considerably more than last year, although I did have some issues. First issue was yet again the queue! How hard is it for the South London Warlords staff to not know what is going on with how it's organized. Also what's the bloody point of squashing everyone up at the front for nearly a hour and a half so people are basically shoulder to shoulder with each other when the back end has a huge gaps!! To point out, I was about 3rd front the front being there since 7:50am (I like being early) and it was the most uncomfortable I have been in years whilst queuing.

Finally let in at 10:05am and even then staff were shouting at each other about who said we could be let in. Ah well finally into Salute and on to a fun filled day of games and geekery.

Having predominantly pre-ordered nearly everything I wanted to buy I was set up to just enjoy a lot of gaming. First up was a game of Infinity run at Simple Miniatures were I was considerably dice raped by a trio of jammy urchins! I did manage to snaffle a couple of Infinity Ariadna blisters for my French Sectorial force from them for £2.50 each so major bargain. 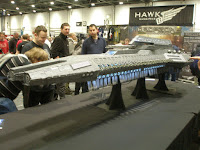 Onto Hawk Wargames to pick up the show exclusive PHR Dropship and catch up Louis and Simon. Dave had also finished his massive UCM spaceship model which looked immense. 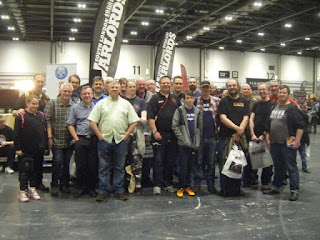 After lunch I attended the yearly Bloggers meet up which saw approximately 30 people turn up for the annual rogues gallery portrait. It was great to catch up with the likes of Tamsin, Ray, Postie, Lee, Mike and Fran as well as many others.

Next on he agenda was a demo of the new Tanks game by Gale Force 9. This is vaguely in the same vein as X-Wing but a WW2 Tank game. Using 15mm Tanks it's a brilliant fun simple quick skirmish game and the starter set was only £18. One quick purchase later and I had the starter and a nice bunch of Tank expansion blisters. I will do an unboxing post soon for this. 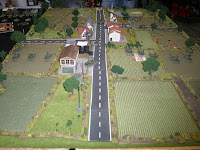 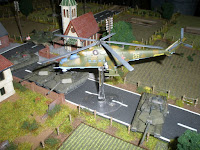 Two other games finished off he afternoon and these were a Team Yankee  game run by the Leicester Phat Cats where my Soviet Tank hordes destroyed the Capitalist Yankee forces and the Battle for Troll Bridge which is the new fantastic scenario set by Warploque Miniatures for their wonderful fantasy skirmish game Arcworlde. I got to chat to Alex Huntley who runs Warploque, sculpts all the miniatures (by hand) and designed the game and got to collect my copy of the set. It's a cracking addition to an already lovely game.

Overall Salute this year was great. I got to catch up with some wonderful people and meet and have fun with many others. 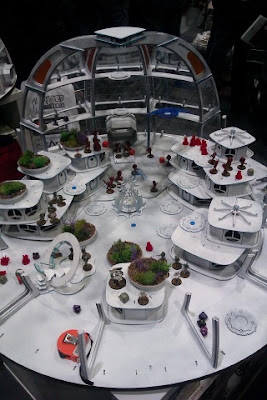 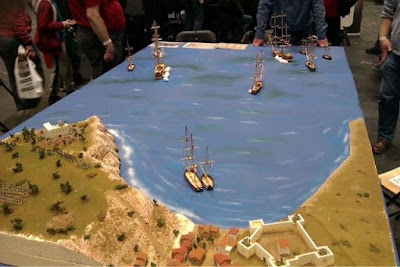 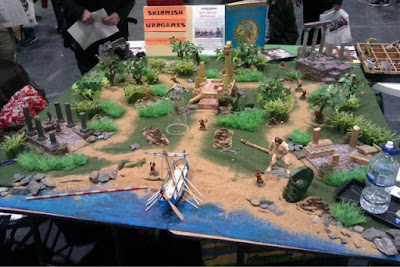 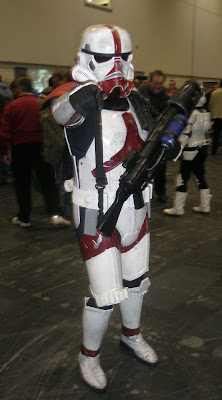 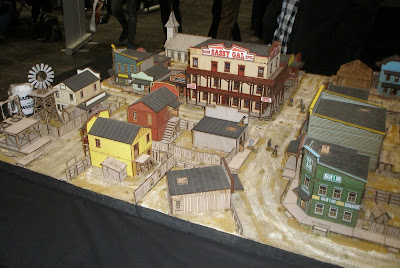 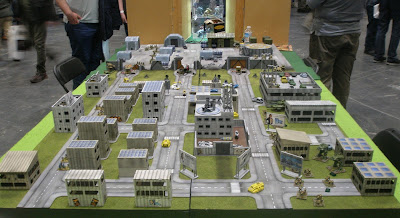 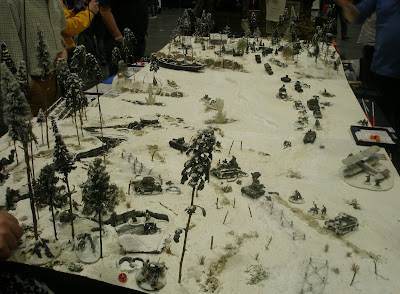 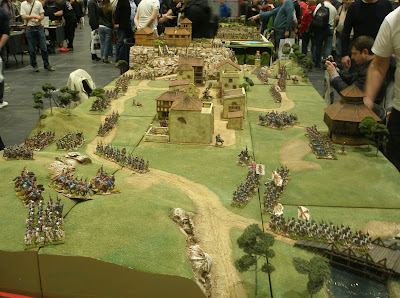 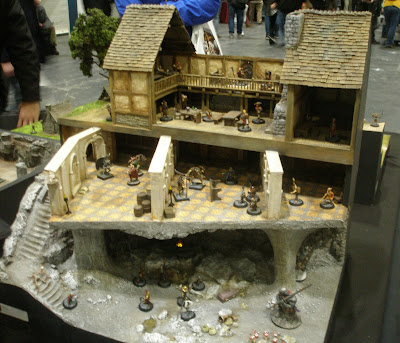 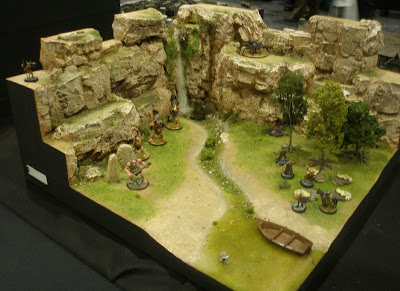 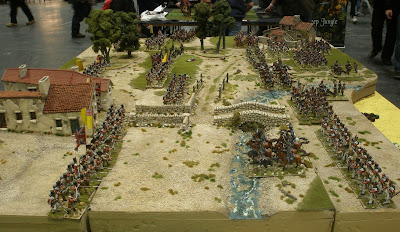 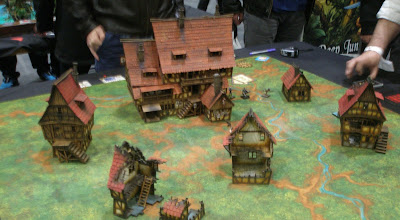 Link to my Salute Loot