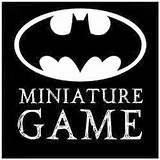 Titan Games Batman Tournament Part Deux
The Second Batman Miniatures Game Tournament held at Titan Games in Lichfield and again I took my Penguin Crew. This was mainly due to time constraints getting a new gang together and mainly part skintness! The next tournament I will definitely be using a completely different crew.
The start of the day saw 18 intrepid players all turn up to be crowned champion and win a coveted Limited Edition Joker Cover Rulebook.
It was nice to again meet some old faces from the first tournament, and to meet some new players. The write up is a brief generalisation of what happened – not a completely blow by blow account ( I didn’t have enough time to write so many notes)
The Two Face Menace 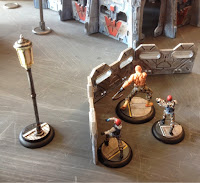 Game 1 - vs Stephen and his Two-Face crew including Victor Zsasz and Deadshot
Board – Amusement Mile, Scenario – Plunder 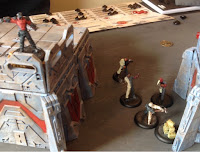 Both crews deploy with Penguin and Catwoman quickly gaining some Loot, with a TwoFace Mook doing the same. Ice Penguin camps out on an Ammo crate waiting for the perfect shot with his Shotgun whilst Sickle and his Elite Henchmen try and flank the TwoFace crew. 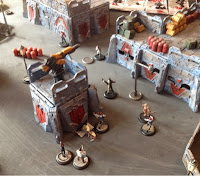 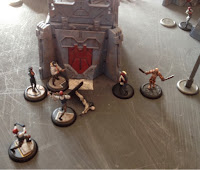 TwoFaces crew move into position controlling an Ammo Objective and also a TwoFace Mook moves up on the opposite side of the board and solves a Riddle but is summarily gunned down by Royal Penguin. Deadshot using his vantage point slaughters Blue Penguin with the Axe and a large melee is entered into in the middle of the board.
Sickle charges in but is taken out by concentrated efforts from TwoFace, Zsaz and Deadshot! Ice penguin is KO’d off the Ammo Objective but it’s quickly retaken by Emperor Penguin, whilst both Elite Penguins cause damage to Zsasz and TwoFace.
The game ended and TwoFace retreated leaving the Amusement Mile in Penguins possession.
Minor Victory.
Attack of the Batman
Game 2 – vs Dan and his Batman Crew, including Nightwing and Canary plus GCPD.
Board - Arkham Asylum, Scenario - Patrol 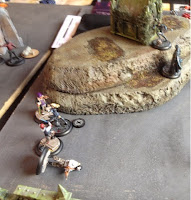 Penguin and his crew were patrolling the edge of his territory and came across the Batman and his Allies whilst they were patrolling the Arkham Asylum grounds. Both crews were diagonally positioned from each other but Canary had managed to hide herself near Penguins area.
Straight away Conqueror Penguin tries to put the hurt on Canary but misses and she skips away and screams Shocking Blue Penguin and Catwoman. Ice Penguinmoves up and shoots Canary getting some lethal damage on her.
Sickle sprints towards some Loot and looks to get into position to move towards Batman’s deployment area (gains extra VP’s at end of game) Canary screams again and again Shocks Blue Penguin. Catwoman agile as ever acrobats herself over to a Loot Objective and claims it. 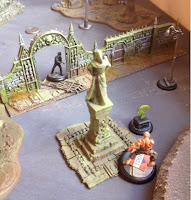 Penguin tries to use his Umbrella Gun to shoot Canary but she dodges away easily but ends up in range of Conqueror Penguin who KO’s her. A GCPD Officer collects some Loot whilst Batman and Nightwing get into good areas to threaten the majority of the Penguins crew.
Canary screams for a third time shocking Conqueror Penguin and Sickle charges Agent Ron who has moved into an open doorway and made himself a target, Sickle manages to KO the luckless Ron.
Penguin attempts a last ditch attack at Batman but completely fluffs it and Batman retaliates, KOing the Penguin. Nightwing and Sickle both manage to get into opposing deployment areas and a GCPD SWAT moves over with his handcuffs and arrests Penguin.
A very tight game throughout and in the end honours were even.
DRAW
Revenge of the Penguin.
Game 3 – vs James and his Watchmen Crew
Board – The Narrows, Scenario – Skirmish 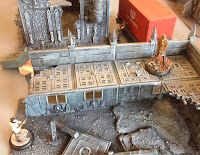 Anyone who has read my previous Batman Tournament post will know I got absolutely mullered by the Watchmen in my last game of the last tournament, so I was a bit apprehensive playing the Watchmen again even though with the new rulebook and erratas, Rorsarchs objective grab trick has been nerfed. 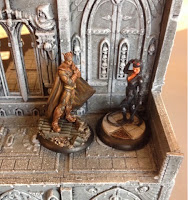 Catwoman started the skirmish by scooting ahead and claiming a Look Objective. Rorsarch hidden deployment saw him pop up in Penguins backfield and pump up on Titan!

Emperor Penguin moves forward and throws a grenade blooding Rorsarch as Royal Penguin shoots down Niteowl as he drops from his ship right into his sights. Niteowl was attempting to attack Catwoman but completely fluffs it and Catwoman’s return strike is just as ineffective. Blue Penguin drops down into the sewers.
Comedian attempts to shoot Ice Penguin but misses and Emperor Penguin attacks Comedian who has come into range and knocks him down with a Power Strike. Silk Spectre following up Comedian, charges Emperor Penguin and stuns him. Sickle who has been hanging back waiting for an opportune moment now charges Comedian and kills him!!! 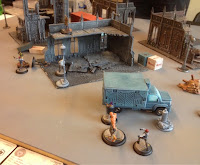 Niteowl and Ozymandias gang up on Catwoman who deftly dodges out the way then uses her climbing shoes and scampers up a wall and escapes. With Catwoman out of reach Niteowl and Ozymandais drop to the ground and threaten Penguin and a few henchmen. Rorsarch is attacked by Conqueror Penguin but it’s a stalement. Blue Penguin emerges from the sewers and claims the Ammo Objective in the Watchmens deployment area.
Sickle charges Ozymandias and bloods him then Penguin shoots him and causes more damge. Ozymandias is then KO’d by further concentrated attacks from Penguins crew.
Silk Spectre takes out Ice Penguin but it’s too little too late, as the Penguin crew has a huge majority of the Objectives and take the day.
Major Win
So all the results were in and I had managed to achieve 3rd Place (extremely surprised) the prize for which was a Limited Edition Talia Card and a Ozymandias Watchmen Blister (very fitting)
I had a cracking day and been very lucky running my Penguin crew. Next time I will now be using a completely new crew.
Some of the crews involved: 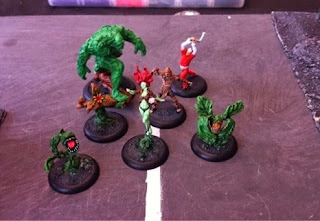 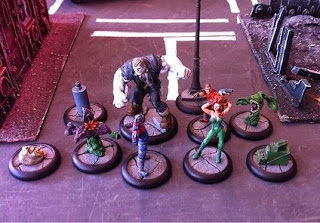 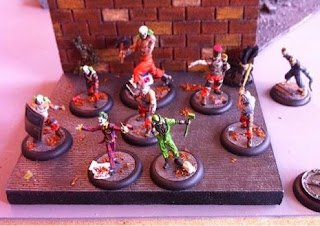 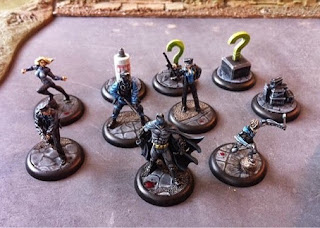 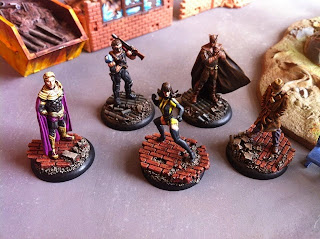 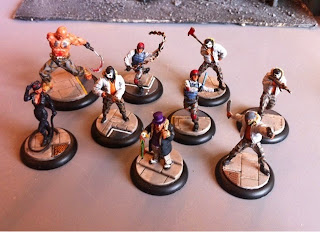 Terry Pratchett has passed away 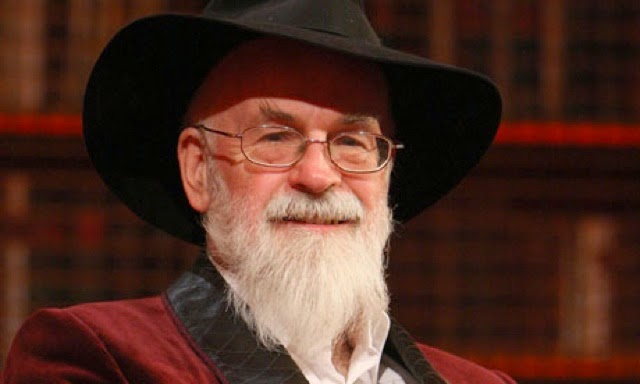 My favorite author Terry Pratchett has died today aged 66.
The creator of the Discworld and author of many other books. Pratchett has been a huge part of my life ever since I picked up the Colour of Magic I when it was first published in 1985.
Terry Pratchett was a fantastic character and someone i have been privileged to meet on numerous occasions, either at book signings or as part of the Discworld fan club events. (I am extreamly lucky to have my whole discworld collection signed) 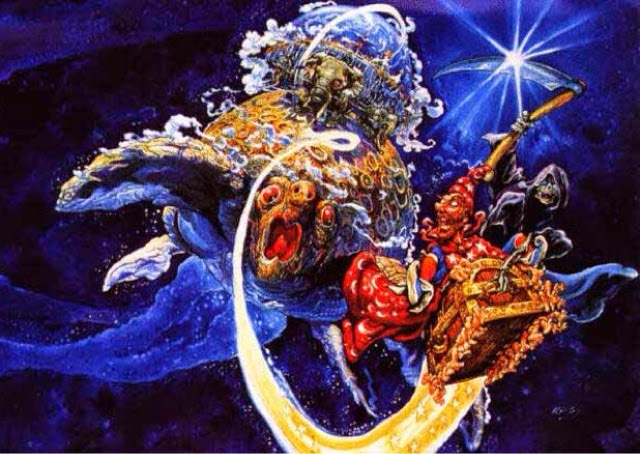 His daughter said today "Terry took Deaths arm and followed him through the doors and onto the black desert under the endless night"
A sad day for literature and for all his many fans. 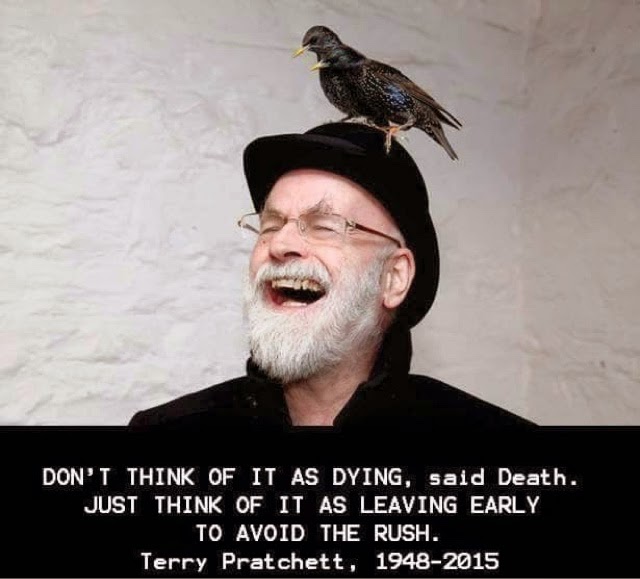 Goodbye old friend, you will live forever in the pages of your books and our hearts.
Posted by Carl at 17:27 No comments: 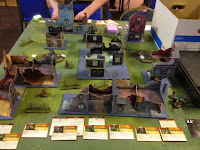 I have not played Malifaux for ages and certainly a long time before the new Second Edition rules came out, so I jumped at the chance to have a run out with my Ortega Crew when my friend Callum suggested a learning game to get our heads around the new edition. 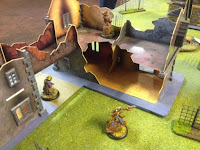 Saying that after looking at the new cards for my Ortegas they were completely different to how I used to play them and things I could do before just weren't an option - should be fun.

We had an Encounter scenario amongst the ruins of the Quarantined Zone with a Line in the Sand and I chose the Scheme Bodyguard (Santiago) and Assassinate (kill the opposing leader). My Ortegas crew was made up of: 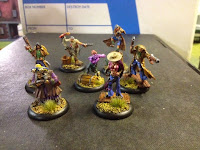 Callums Freikorp had Von Schill, A Trooper. A Librarian. A trapper. A Strongarm and this large massive armoured beastie (unpainted - how dare he!!!) 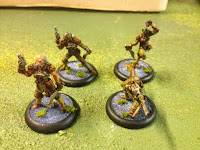 Both sides set up in their deployment zones with Nino sticking with his family but the Freikorps Trapper decided to snag the central building. 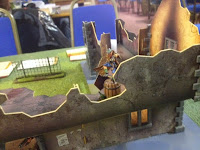 Turn 1. Mostly movement into postion along with some buffs. Nino however snipes from the corner of the ruins he is hiding in and manages to kill the Freikorps Trapper who unfortunately hadn't realised he was wide open in the middle and not in cover!

Turn 2. Papa Loco moves up and chucks some dynamite and manages to damage the big beastie. Von Schill shoots at Abuela and damages her. Papa Loco takes some damage and pushes towards Von Schill. 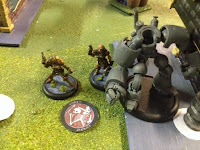 The Freikorps Strongarm jumps in to smack Abuela and squashes her! Perdita guns down the Strong Arm. The Enslaved Nephilim attempts to cast influence on Papa Loco but fails.

Turn 3. Papa Loco charges the Freikorp troops but fluffs his hits and then gets hit and blows up! Santiago and Nino open up on the big beastie but couldn't kill it due to flipping a Black Joker. 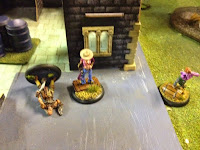 Francisco attacks Shill and is mullered in turn.

Turn 4. The Ortegas focus all their attacks on Von Schill, chipping away at his amour and kill the Librarian to stop her healing flips. Perdita charges towards Von Schill and after a tense dual manages to finally kill the Freikorp leader. |running short on time we called the game. Callum had 3 VP for controlling Lines in the Sand and I had gained my two schemes,Santiago was alive and got his bodyguard and Perdita had killed Von Schill for the Assassinate.

Overall and good game, lots of rules that I still need to catch up on and hopefully the next game will flow quicker. 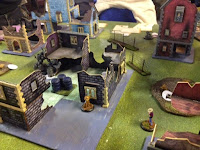 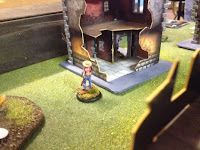 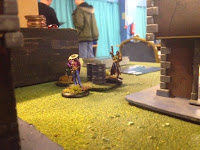 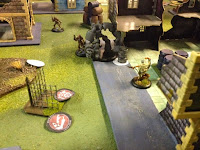 I have a Relics Tournament at the end of March which is again being held in Worcester. This time round though I thought I would use a different faction to the Nuem which I entered the previous tournament with.

This time round I am taking Vaettir - basically these are evil, twisted fairies that are the main cause (in the games fluff) of the destruction caused upon the world and races of Relica.

Below are pictures of my force, built and ready to paint. They are fiddly little buggers and if I never have to build another Vaettir again I will be happy (says he who has gone and ordered more to fulfil my lead habit!!!)