Game 3 of the season and another divisional game against the long standing human team the Brewers.

So anybody (except the poor Chaos Dwarves) could go top of the division.

The weather yet again was nice and the Brewers had the edge on the fans. The Bloodjaws brought along Ugroth Bolgrot and his chainsaw. 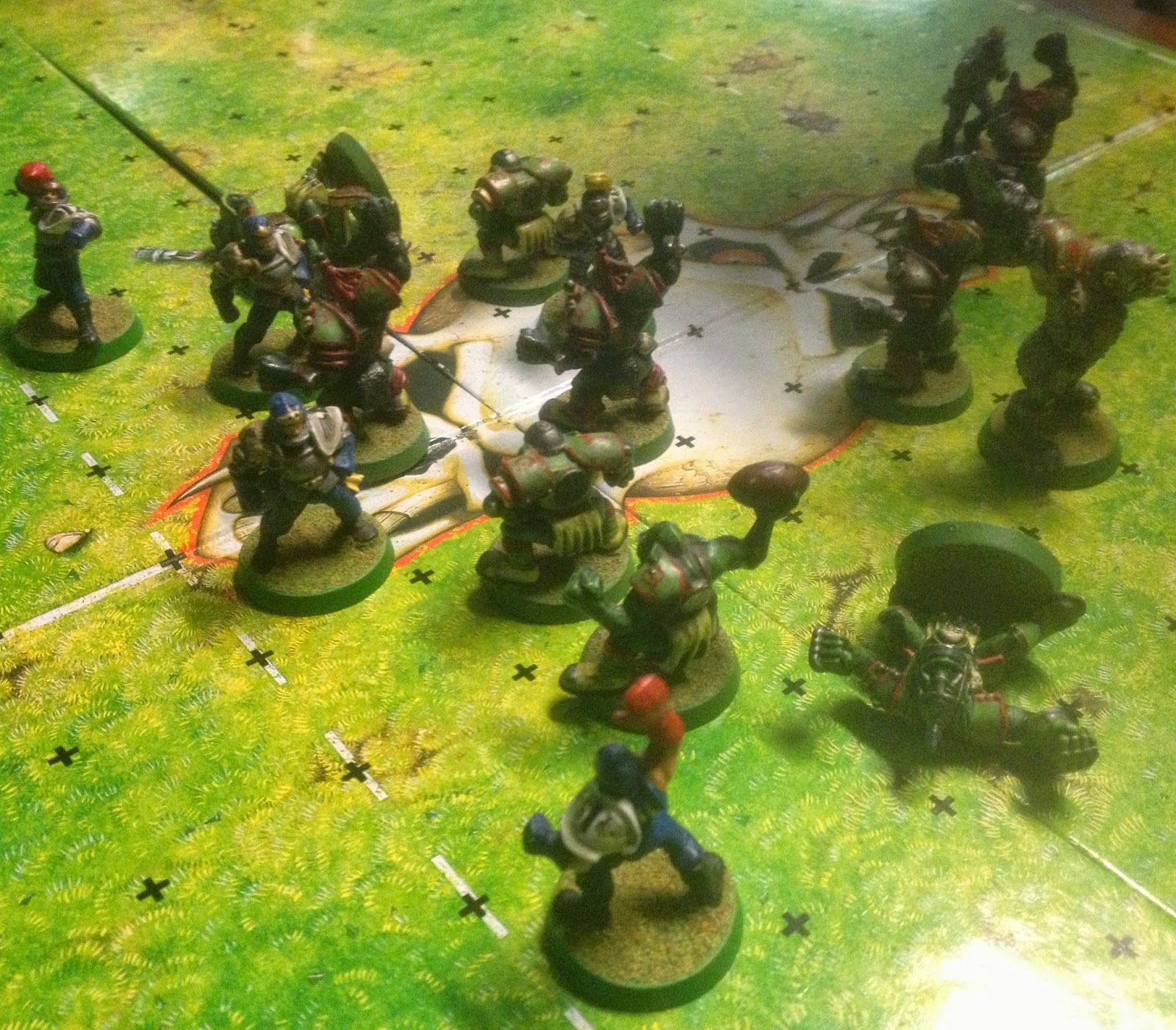 The Bloodjaws lost the toss and kicked to the waiting Humans, it looked like the weather was about to change but only a gentle breeze wafted through the stadium. The Brewers start their drive with their Ogre stunning a Black Orc. The Bloodjaws steam in to contain the the Brewers advance. An Orc blitzer sidelines a lineman and the crowd (fortunatly Orc fans) KO him.

An Orc blitzer tries to dodge to blitz the Human ball carrier but fails and falls over. The Brewers slowly advance again and two lots of double skulls ends the Bloodjaws dismal half as the Brewers Catcher sprints into the endzone to score. TOUCHDOWN 0-1. 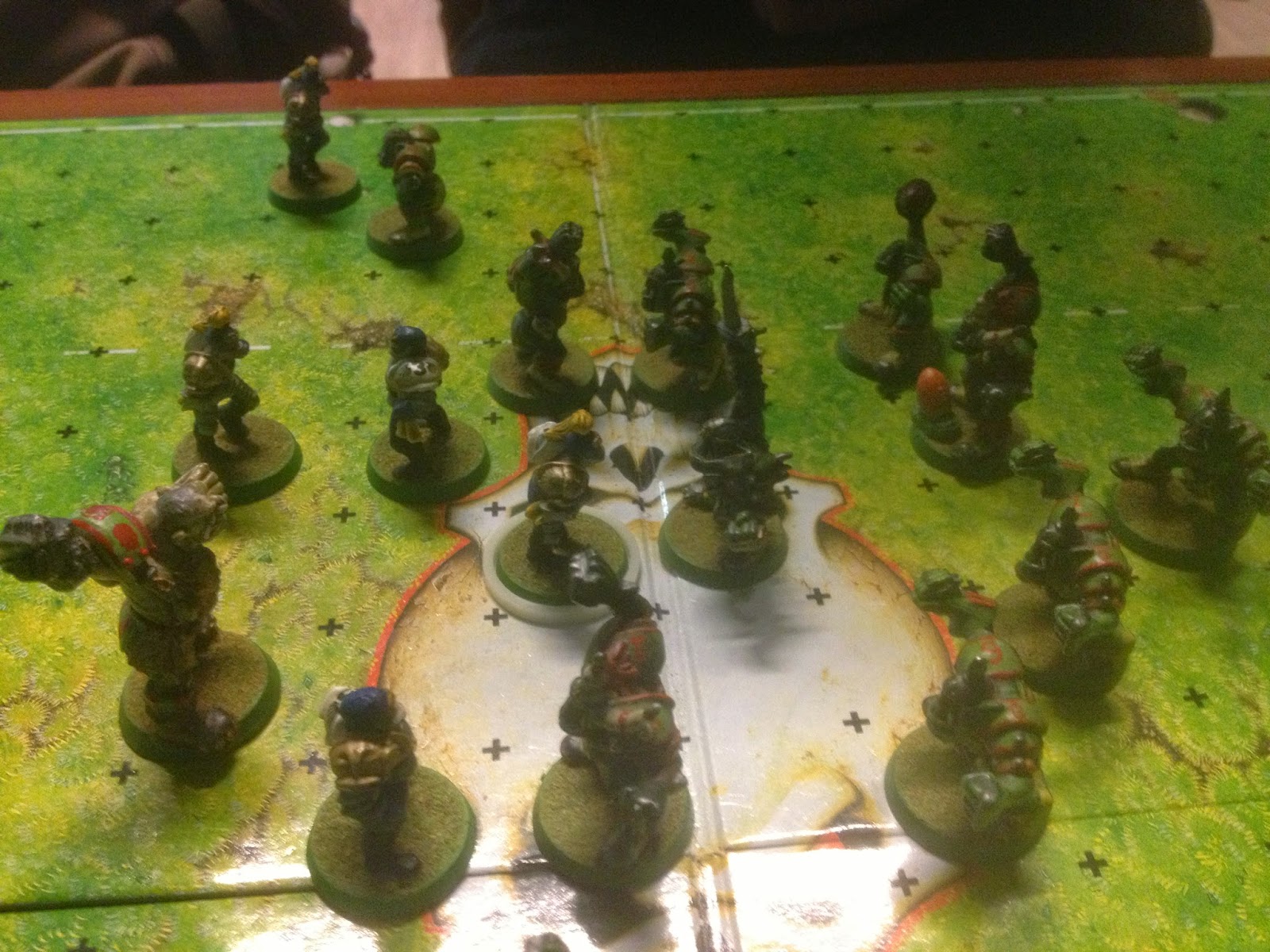 The Brewers kick and the Orcs get some Brilliant Coaching as a Black Orc catches the ball on the line of scrimmage. The Bloodjaws drive ahead and Ugroth forgets to oil his rusty chainsaw as it feebily fails to break any armour. 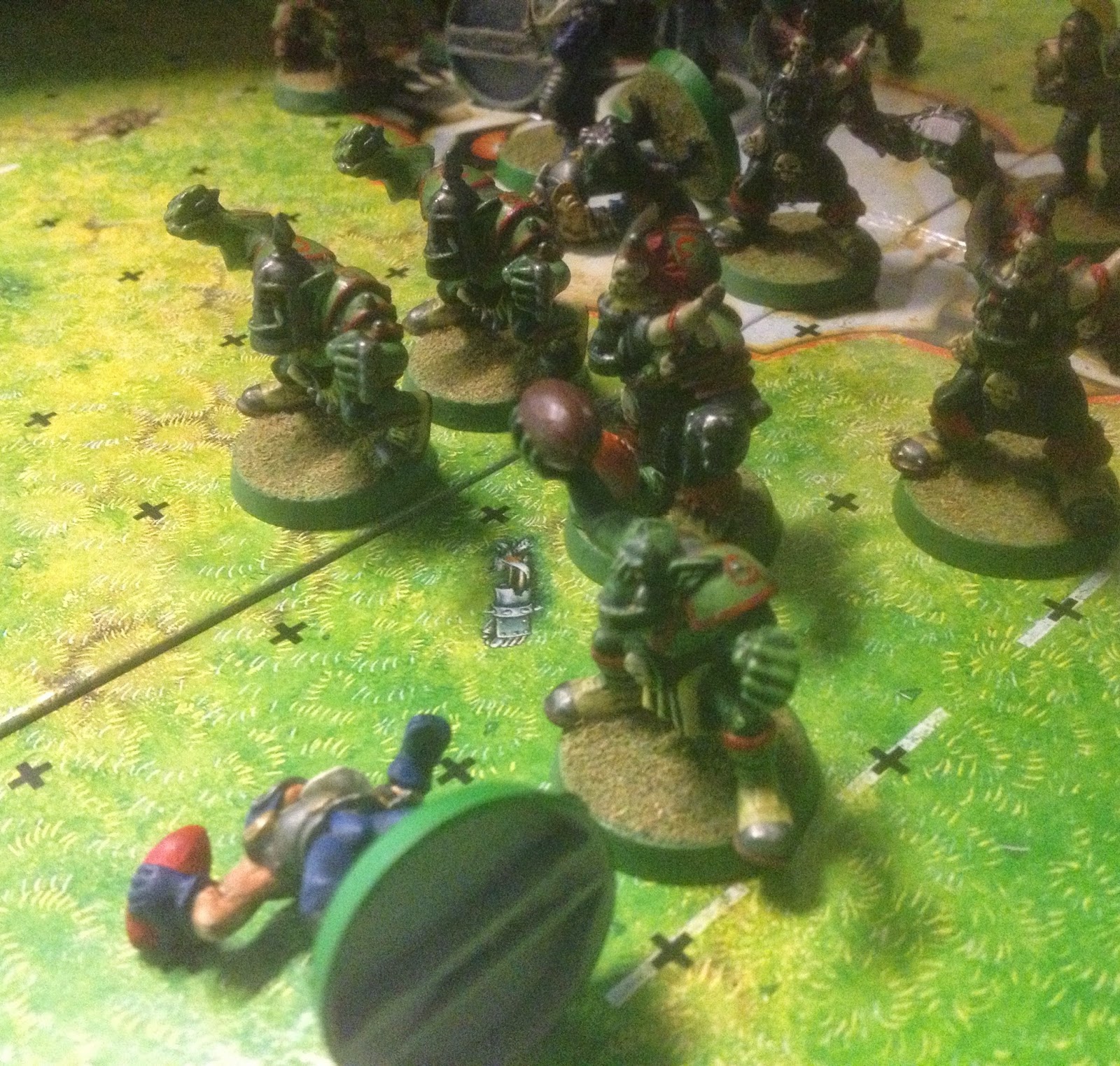 An LineOrc blitzes a human catcher and KO's him whilst the Bloodjaws smash through the humans. No real lasting damage is caused and the Brewers are soon up and defending well. The Orcs manage to cage the ball in the Brewers backfield but the Humans manage to blitz the ball carrier after a horrendous failed block by a Black Orc. 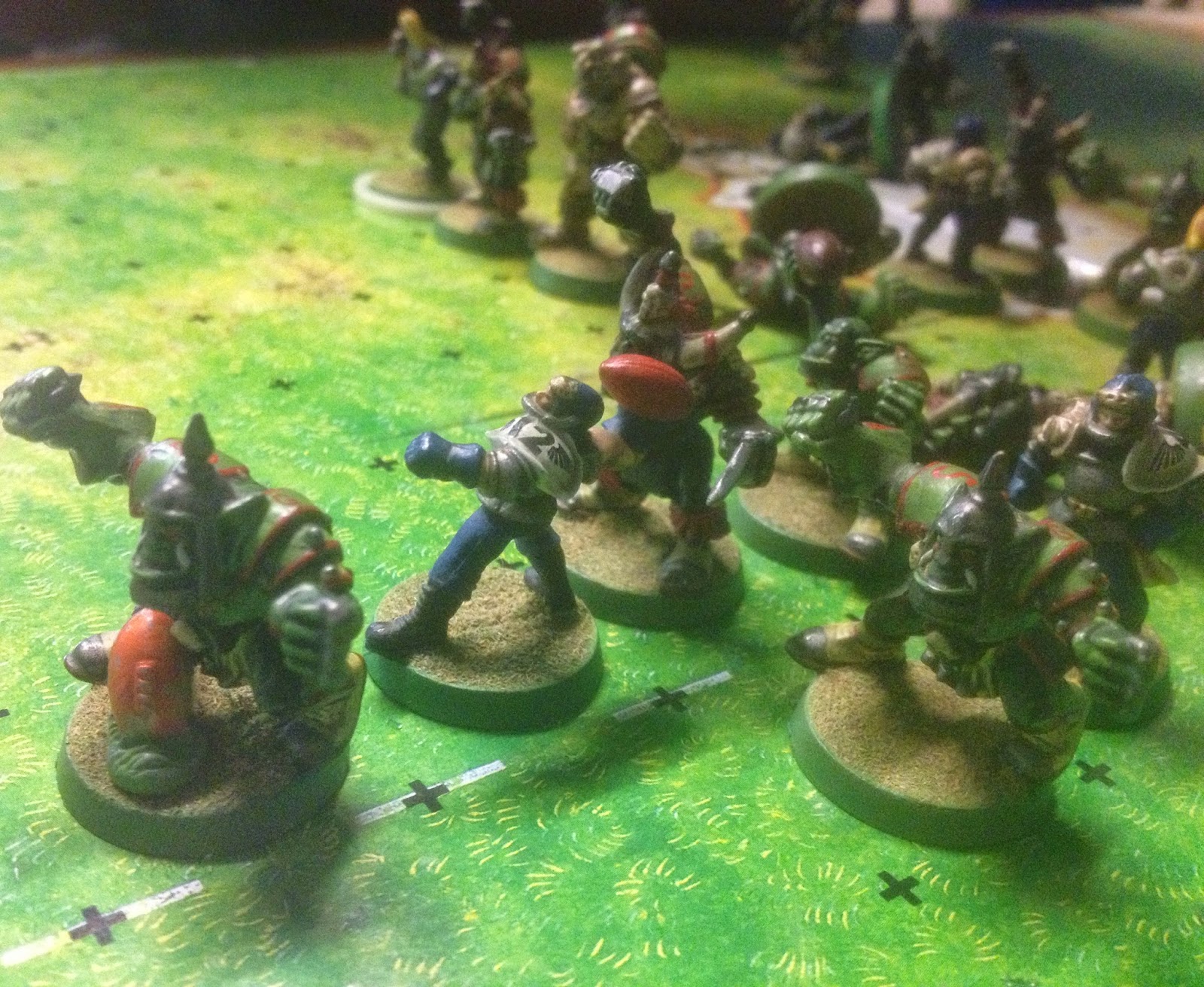 The ball pops free and is regained by a Bloowjaws Blitzer who storms towards the endzone and no human can catch him. The blitzer scores TOUCHDOWN 1-1 and the game ends. Another hard fought draw for the Orcs.

News comes in from the other match in the division and thats a draw also. The Bloodjaws, Brewers and Marauders are all on 5 pts whilst the Chaos Dwaves languish at the bottom on 1 pt.

Cross divisional matches next and they should prove very interesting.

Thats it for now, goodnight sports fans.
Posted by Carl at 17:08 No comments: 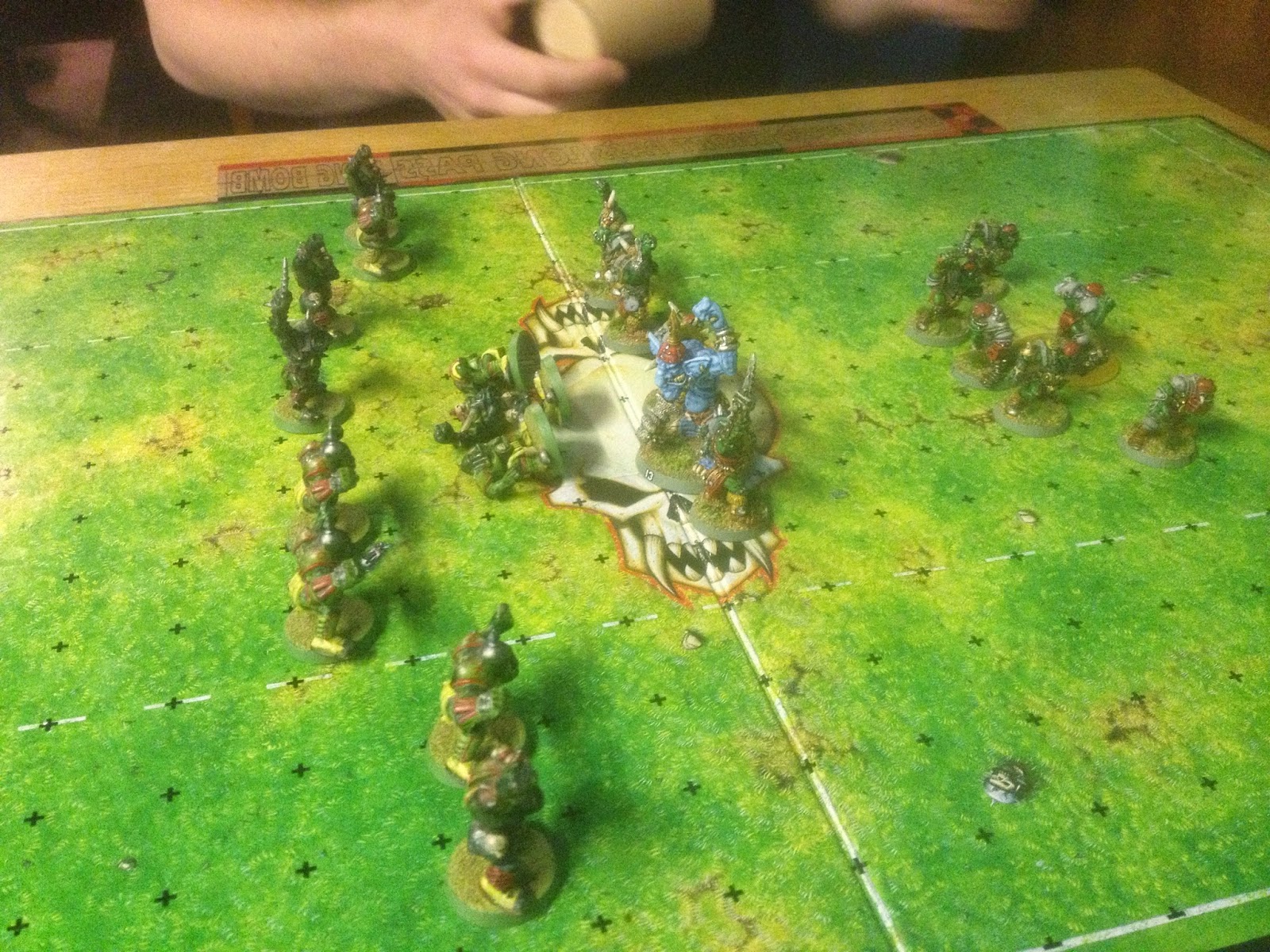 The Bloodjaws are ready for their second divisional game after the comprehensive win over the Chaos Dwarves. This match would be against another Orc team which has been strongly embedded in league play for two seasons.

The weather was fine and the Marauders had the edhe on the fans in the stadium. Although the Bloodjaws have brought along Star Player VaragGhoulchewer. 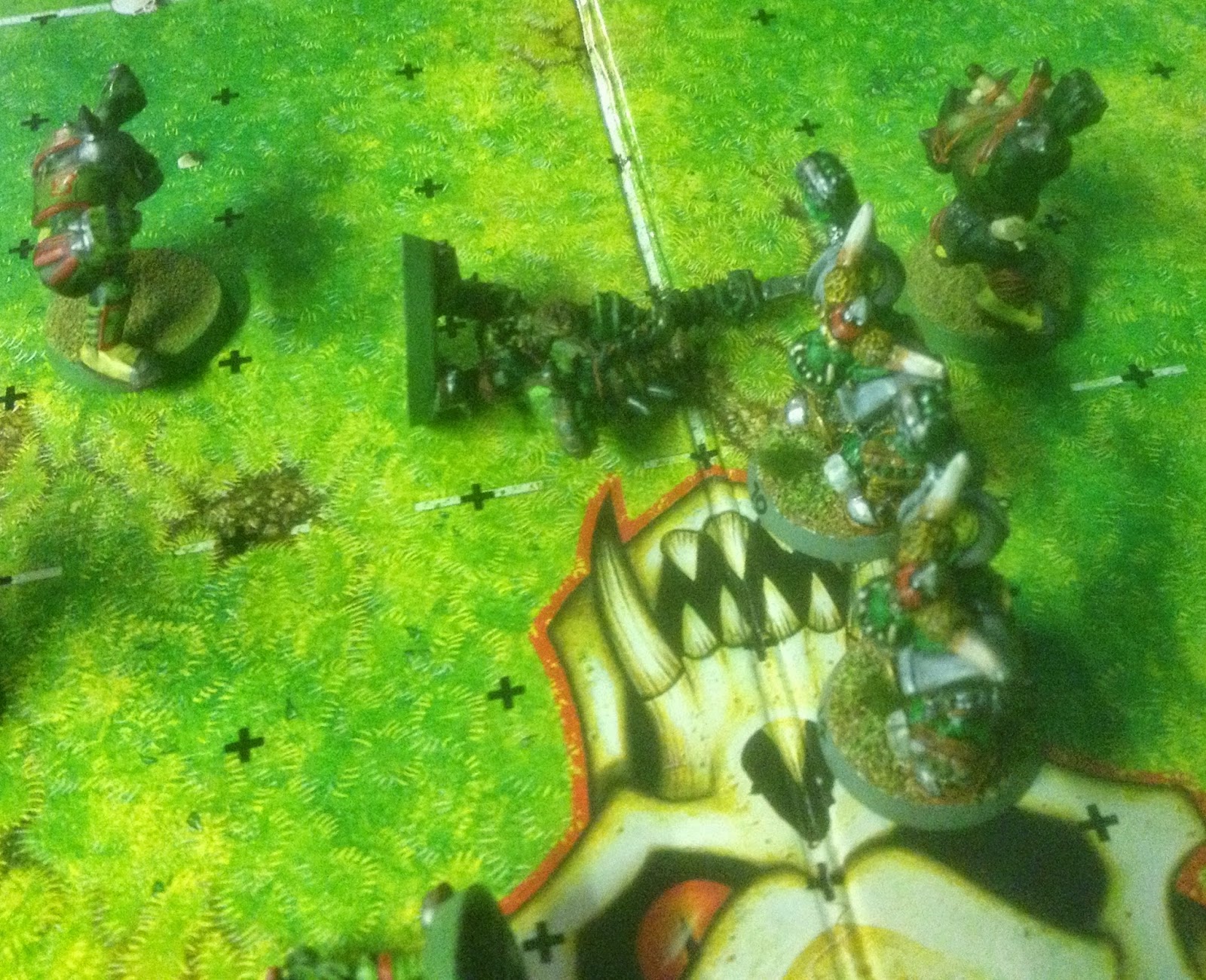 The coin is flipped by the ref and the Marauders win the call and elect to receive. The Bloodjaws set up and the ball is kicked, whilst in the air Temperbay receive some good coaching which will help their rolls. 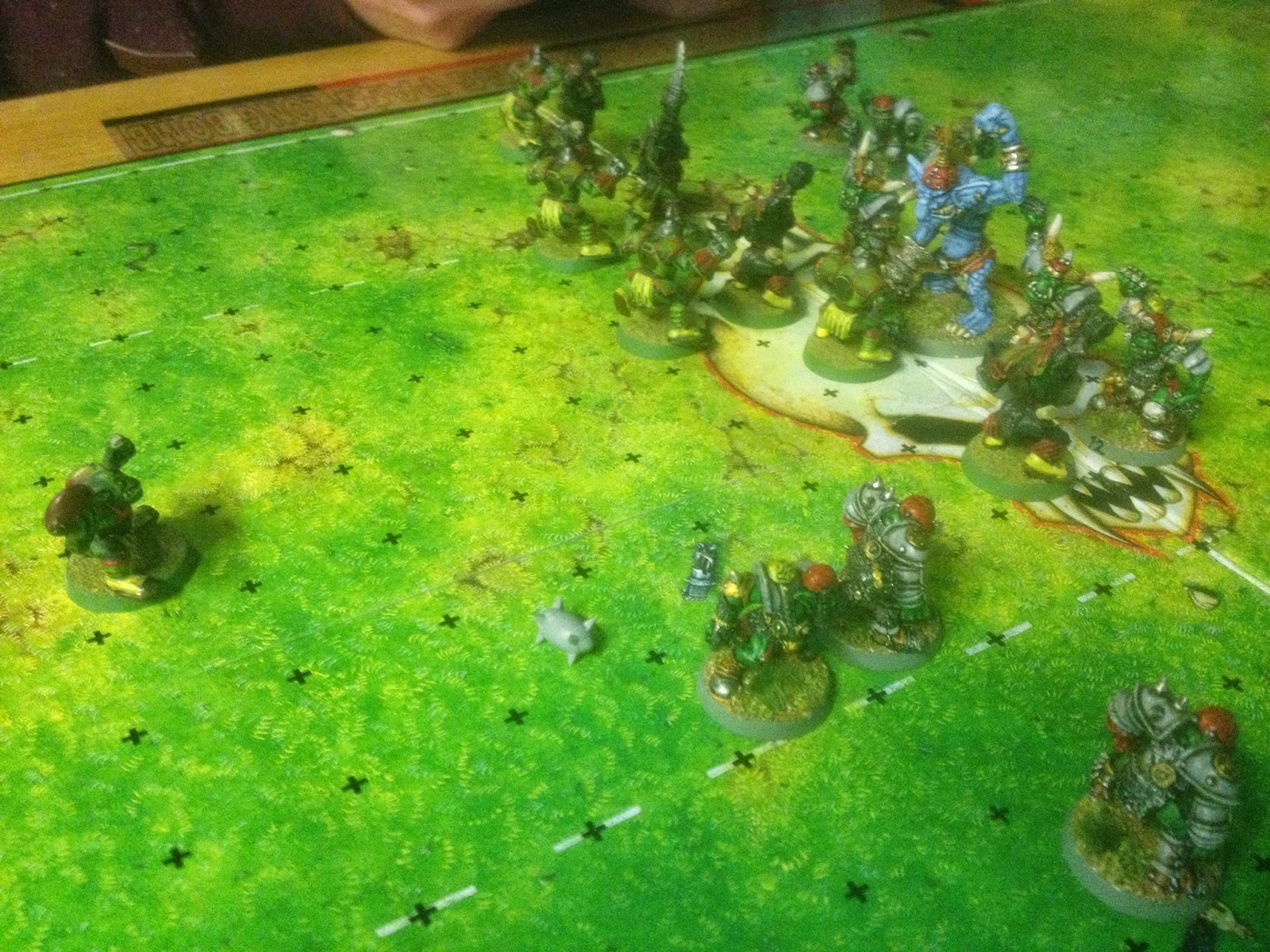 The Marauders start well, crunching a Bloodjaw lineorc then collecting the ball and get their cage rolling. Varag blitzes but double skulls and falls over!!! Temperbay grind ahead and manage to CAS an opposing lineorc. A Marauder blitzer breaks free of the grind but the Bloodjaws blitz him and get a CAS Serious Injury.

The Bloodjaws managed after a few plays to get a lucky blitz on the ball carrier and kock him to the gound. The ball is free and then a Bloodjaw Black Orc skulls out and falls over. The Marauders get another CAS, this time on a Black Orc and although the Bloodjaws defend valiantly the Marauders grind out a score on turn 8 TOUCHDOWN 0-1. 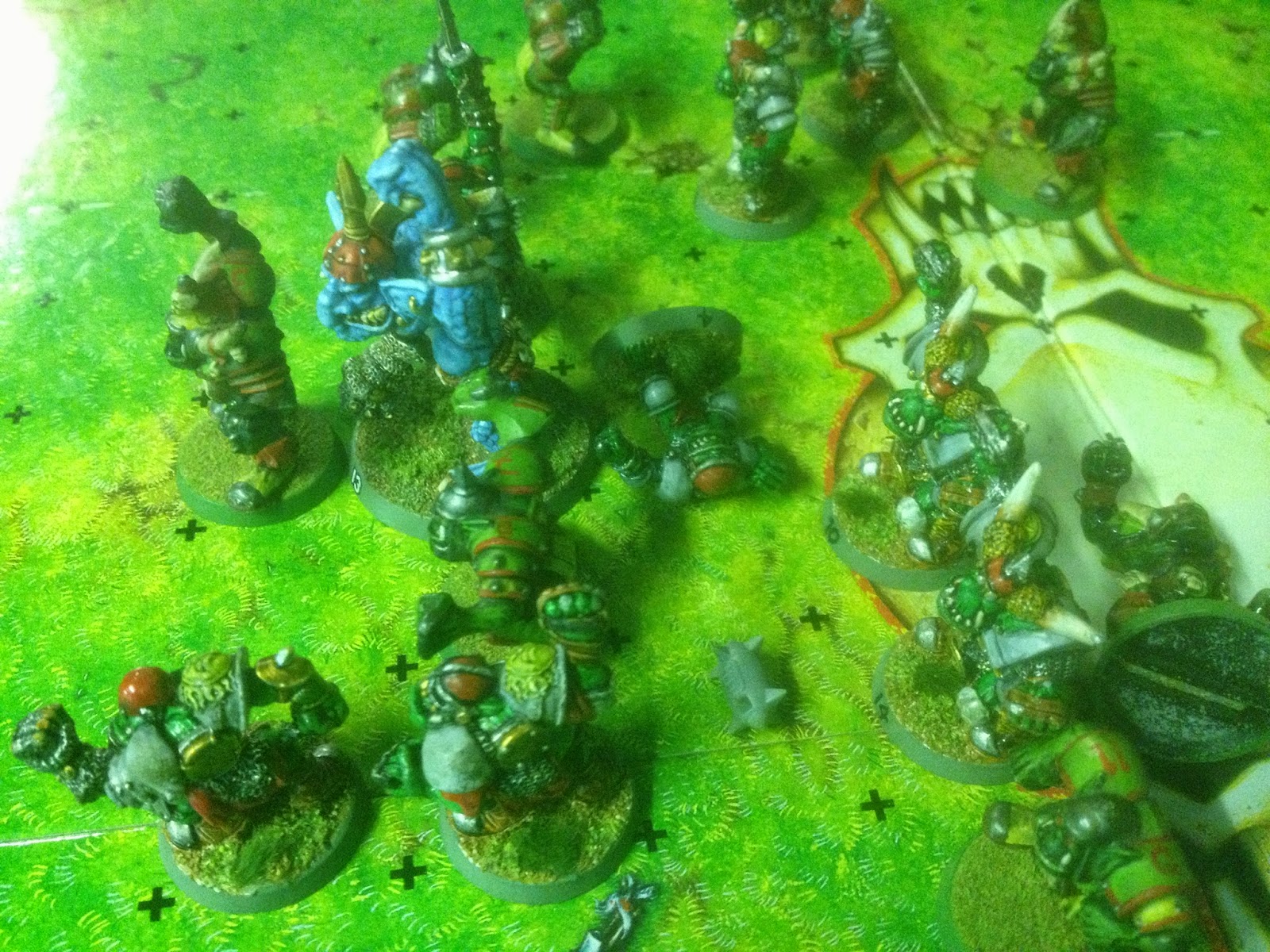 Second half and Temperbay kick and manage to blitz the Bloodjaws!! the Marauders definately managed to bribe Nuffle and the dice gods. The Bloodjaws finally manage to collect the ball and attempt to put the hurt on the Marauders. Although they manage to crunch the Marauders Troll it gets up easily. The Bloodjaws try moving the ball down field on the flanks and a Black Orc fluffs his block on the Troll. Temperbay blitz the Thrower carrying the ball and gets a CAS with the ball scattering free.

The Marauders try and dodge around the opposition to collect the ball but fail and the Bloodjaws scoop it up and scamper away. A blizter screams towards the endzone and manages to cross the line at the whistle scoring. TOUCHDOWN 1-1.

A hard fought draw and the Bloodjaws had a few casualties. 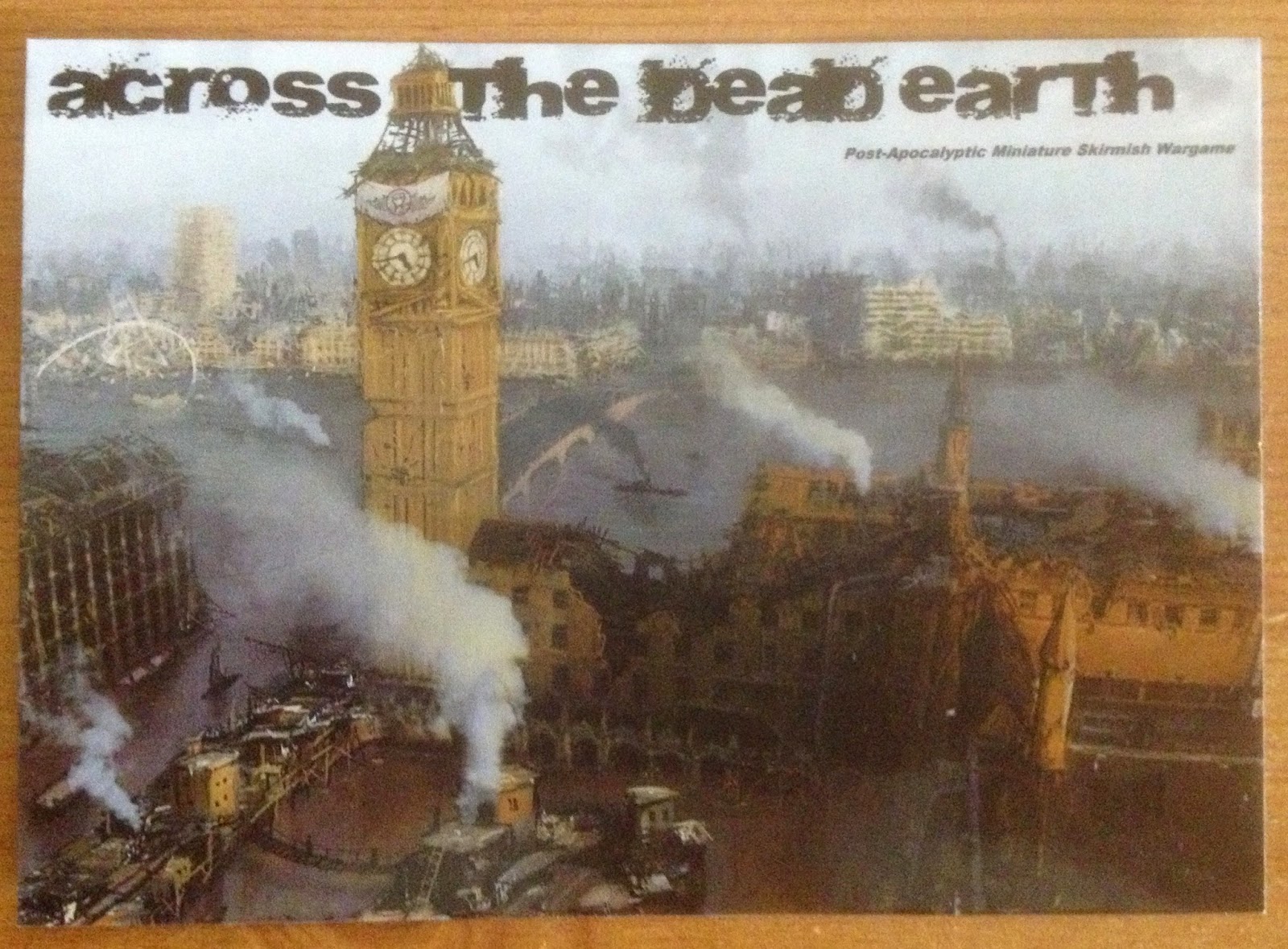 As mentioned previously in a few posts, I was heavily involved in the Across the Dead Earth Kickstarter investing heavily for a very favoursome reward package.

Across the Dead Earth is a fantastic Post Apocalyptic skirmish game primarily (at the moment) centered in the F-UK (Former United Kingdon) this makes the background fluff very interesting to read.

The game has been produced by Rich Chapple of Dead Earth Games and its great to see a new independant games producer with the dedication and drive to put together a rather cracking new game.

So onto the Kickstarter goodies. These arrived through my door on Monday after being posted the previous Saturday (great service) and unlike many other Kickstarters, this on has delivered on time and with great product.

My Goodies included so far (as I will receive all gangs, expansions and anythign else they produce for the next 2 years!)

The Rule book including sheets of counters and cards

Three gangs worth of miniatures 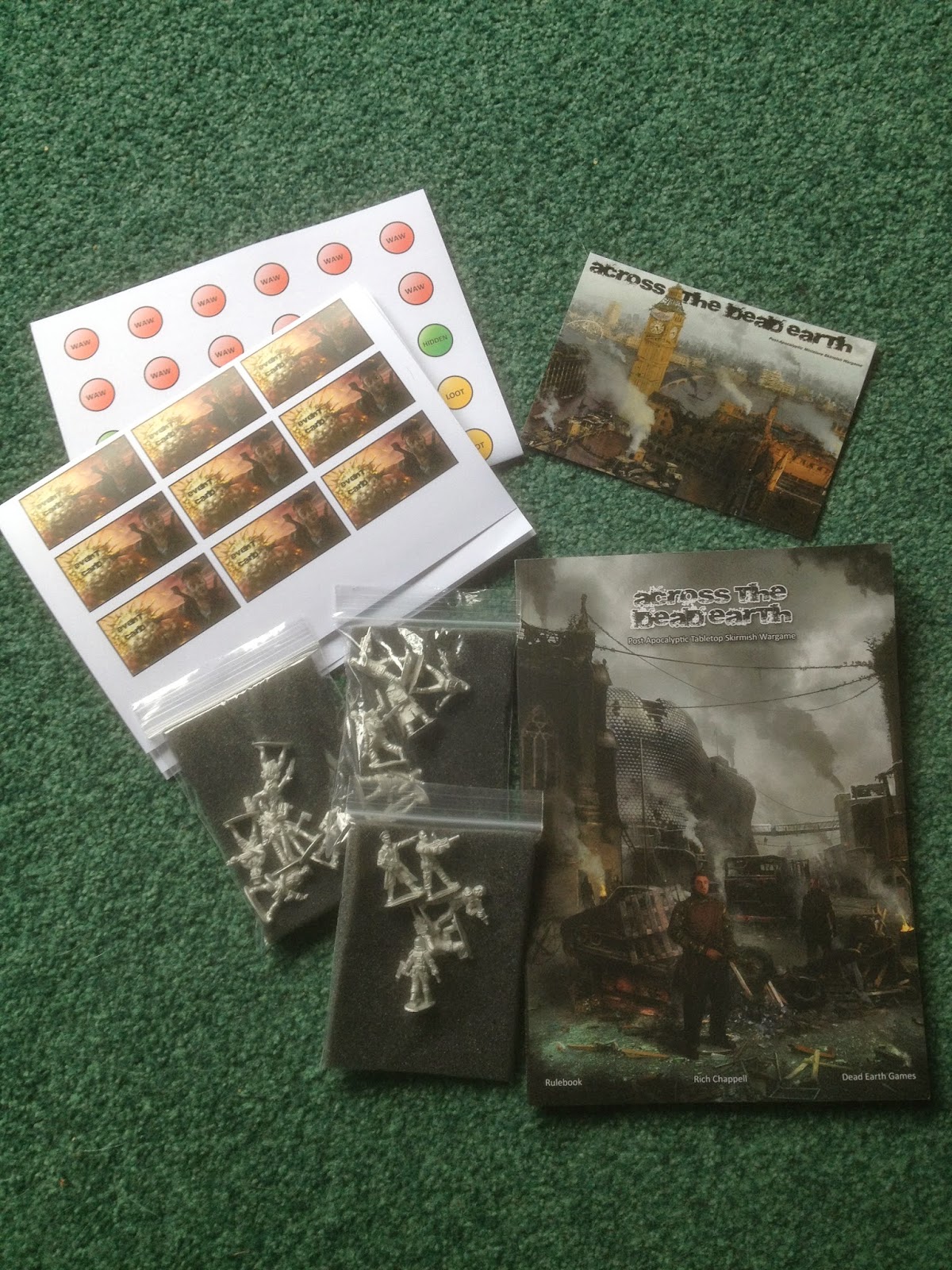 
The Family including Mercenary Crimson 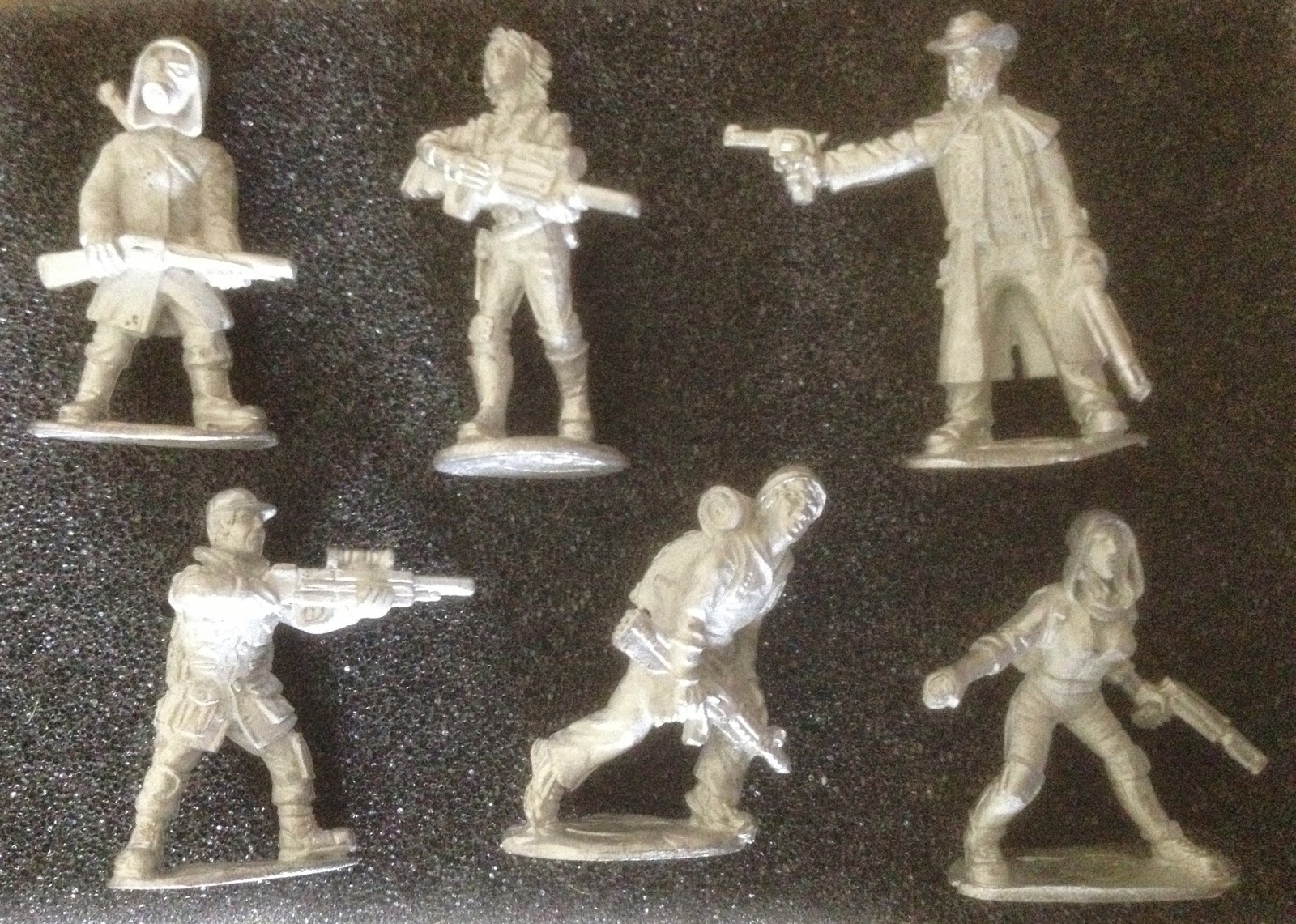 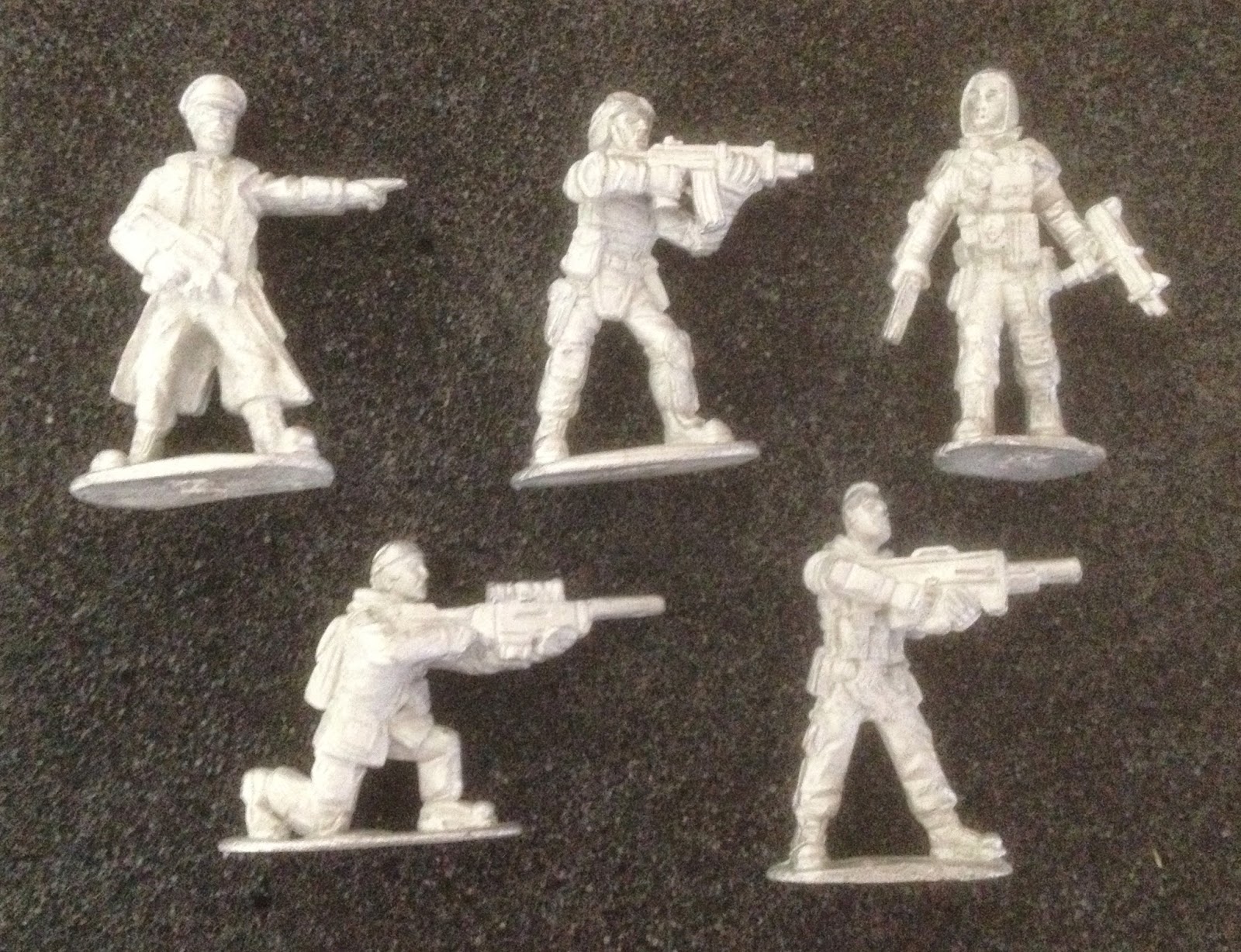