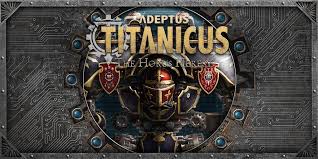 The Horus Heresy rages and the war pits once staunch allies against each other. In a small corner of the galaxy, near the embattled planet of Calth - Legio Gryphonicus have detached an Axiom Maniple of Titans to hunt down and neutralise a rogue Ferrox Maniple of Legio Ignatum. Although the Fire Wasps Legio are loyalist in the grand conflict, they are loath to hunt down their own once close friends and colleges. So Priceps Senioris Vespertinus of Legio Gryphoicus has been tasked with the duty of purging the rogue Fire Wasps in the Emperors name. 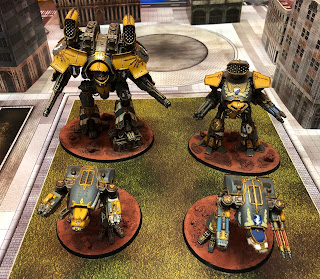 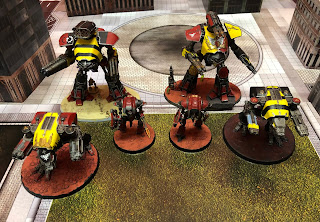 Vespertinus housed in his mighty Warlord, observes the rogue elements of the Fire Wasps as they stride forward from the outskirts of the city. Ordering his Warhounds to Full Stride on the flank, he opens up with the Warlords missile launchers and cracks a wry smile as is auspex shows multiple void shields on the enemies side wink out. 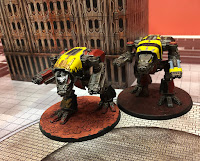 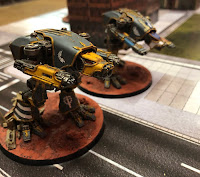 The War Griffons flank the traitors with their Warhounds, expecting their larger brethren to take down the advancing Lancer Knights. Unfortunately the targeting machine spirits dont seem to be in alignment and the Lancers manage to charge Oculus Quaesitor and critically damage it enough that it spins uncontrollably, wildly firing before crashing to the ground.

With the crippling blow of losing a Warhound from his force, Vespertinus opens up with all his remaining forces fire power and is rewarded with the destruction of the Fire Wasps Warhounds and a severely crippling both Reaver's (basically negating the weapons of one and bringing the god engine to a standstill and blowing the chain fist arm directly of the other) 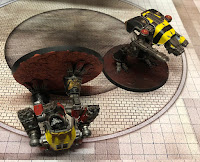 Despite this crushing show of force, the Lancer knights, bowed by their success charge under the hailstorm of fire from the Warlord and with deft manoeuvres, aim their lances right into the side of the Warlords body causing massive damage. The feedback temporarily shocks the War Griffons Senior Princeps and when he recovers, he aims a Volcano Cannon directly into the carapace of one of the knights and vaporises the nuisance! and with a massive kick from its right leg, sends the other knight flying to its demise. 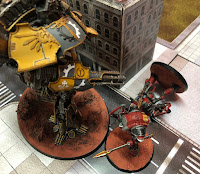 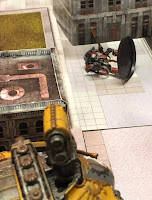 Both sides have taken devastating damage and losses but the Fire Wasps have victory in their sights. With a cry to Horus, they charge their once chain fisted Reaver, barrelling past Manus Exitium, it opens fire at point blank into the back of the Warlord. Vespertinius is fried by the massive feedback though his MIU. Without the control of the Priceps the massive God Engine loses control and tumbles backwards, crashing to the ground.

Manus Exitium exacts revenge on seeing the Warlord fall and splits the Ignatum Reaver from top to bottom with a hail of rounds from its Gatling blaster. 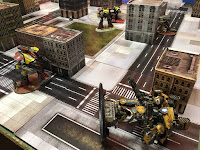 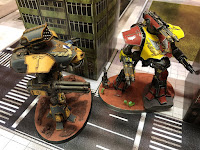 Auxiliary support from Legio Gryphonnicus' Skitarri regiments as well as Adeptus Mechanicus recovery crews are soon seen entering the city and all Loyalist Titans are recovered.

Traitor Engines are purged in Promethium!!

This was my first proper game of Adeptus Titanicus and we missed out a few things like Stratagems and a few rules were glossed over (forgot) I just managed a win by 3 points after we totted up victory point totals.

One thing I did learn is that when something gets in close, they can call the location to do damage when they hit and in close it also negates void shields (OUCH!! its brutal)