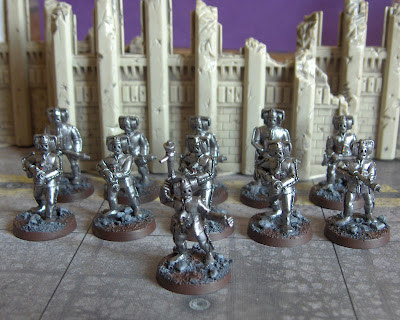 Black Tree Design Cybermen. Basic paintjobs as all these needed were a coat of Boltgun Metal, washed with Badab Black and then highlighted with Mithril Silver. I have a Cyber Controller to add to this squad. Also another Cybermen squad WIP but these are from the Earthshock period. 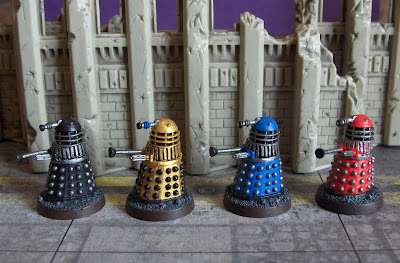 Other Dr Who in the lead pile consist of Sontarans, UNIT troops, Ice Warriors and the Dr in various incarnations plus various characters.

These will be posted as and when I get a chance from my various other projects - will it never end!!!(please dont hope for anything soon)
﻿

A SAGA day held at the home of the Wargames Association of Reading.

8 players (mostly called Richard or Rick!!) took part in 2 scenario games with 6pts Warbands and a final four way Feast of Crows with 4pts to decide who was the Warlord of the day.

The Warbands fighting it out where made up of: Normans, Bretons, Vikings, Welsh, Anglo Danes, Skraelings and Anglo Saxons.

Morvan the Breton Warlord has arrived in the countyside surrounding the Welsh border, whilst patrolling from his Keep he and his band of warriors have come across a marauding band of desperate Vikings.

After deployment rolls were made for initiative and for the first three turns the Skraelings and Anglo Danes just continued to manouver, whilst my Bretons charged straight forward to contact Richard Oates Vikings (again) After a couple of very bad turns for the Vikings they where completely wiped out!
﻿


Whilst the Bretons were merrily slaughtering the pagan invaders, Rich J's Skraelings finally made a move on the Anglo Danes, unfortunately after a minor success with their javelins the fragility of the Skraelings showed through and they started to crumble.﻿

﻿
A few more deadly turns and whilst Skraeling and Anglo Dane where hitting each other hard the Bretons stormed in and put Eowics the Anglo Dane Warlord to the sword!
Posted by Carl at 13:43 1 comment:

Bushido has got to be one of my favourite small scale skirmish games.  Released last year by GCT Studios it has been a massive success and with a recent run out at Salute 2012 things look like getting even better for us who love Oriental Samurai Fantasy/Mythology.

GCT has just published information about the next faction (The Ito Clan) that they wish to release and below is the concept art for the starter set miniatures, utterly Awesome in my opinion.

﻿
A campaign has been set up on Indiegogo with the goal of raising $5000 and each pledge will net you different rewards depending on ammount, very much like a Kickstarter campaign.

This is  the link to the campaign for anyone who is excited and interested in making this faction a major reality for the game http://www.indiegogo.com/bushido?c=home so far $875 has been raised and it still has 30 days to run.  Get PLEDGING. I have.

This has been the first Bushido post as I finally got to grips with this blog malarky and I will be posting up regular Bushido goodness in the shape of concept art, painted miniatures and general musings over the game and its constant success.

The fight for the Jwer isles has begun - will you be a part of it?
Posted by Carl at 18:02 No comments: