Last Thursday at Huntingdon games club 4 brave warbands squared off against each other in Open Combat.

We used 150pt Warbands and everyone played everyone else once for 3 games total.

I had a Samurai warband made up of a Samurai hero with a bow a Ninja, another Samurai and some Ashigaru Spearmen and archers.

Alex had put together a 100 years war miniature based warband focusing on double handed axes and pole arms with a couple of longbow men.

Nic had his ubiquitous Halfling warband with a couple of bowmen.

Mike ran his trollslayer Dwarves with no ranged weapons but with massive axes and enragement abilities.

1st game was against Mike on my Japanese themed board. Mikes Dwarves charged towards me as fast as they could, enraging themselves for extra attack and damage abilities but reducing their defence. I quite happily shot his flame haired Stunties to death with my archers before overwhelming him with my spearmen who could attack without getting into bases to base. Then I followed with my hero who cut a swath in the Dwarf ranks.

1st game win to me and I hadn't lost a model in the whole fight. 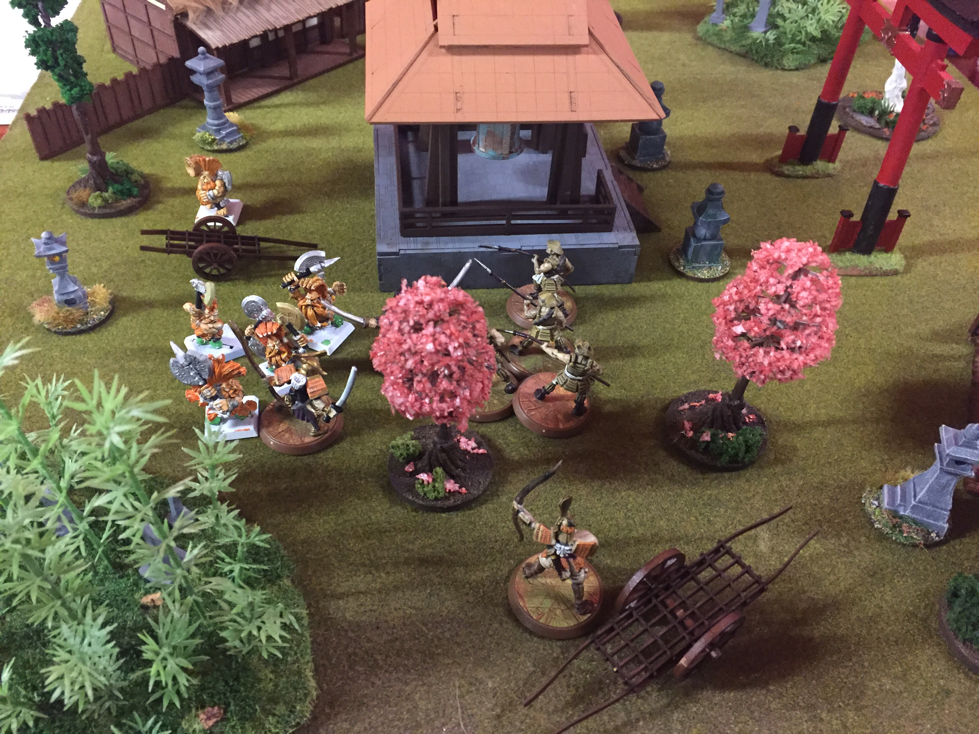 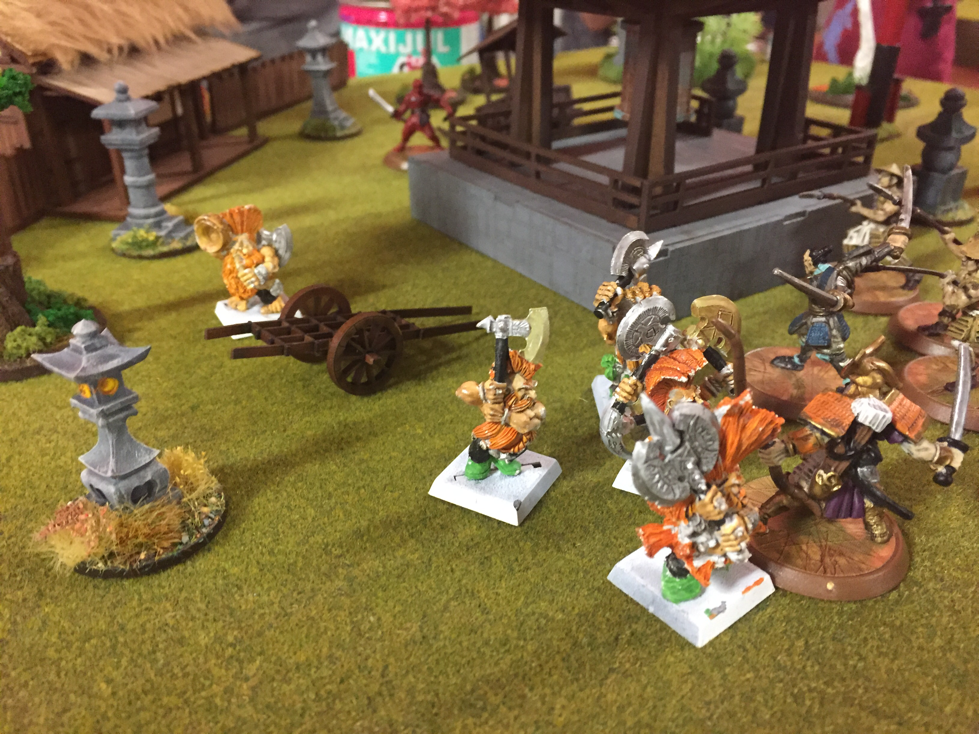 Game 2 against Alex and his 100 year medieval Force. Again I used the same tactics as the first game but Alex did have a couple of archers that started to cause some damage to my troops.

I soon negated these and gained the upper hand, whittling his warband down until I summarily despatched his leader with my double Katana armed Samurai. 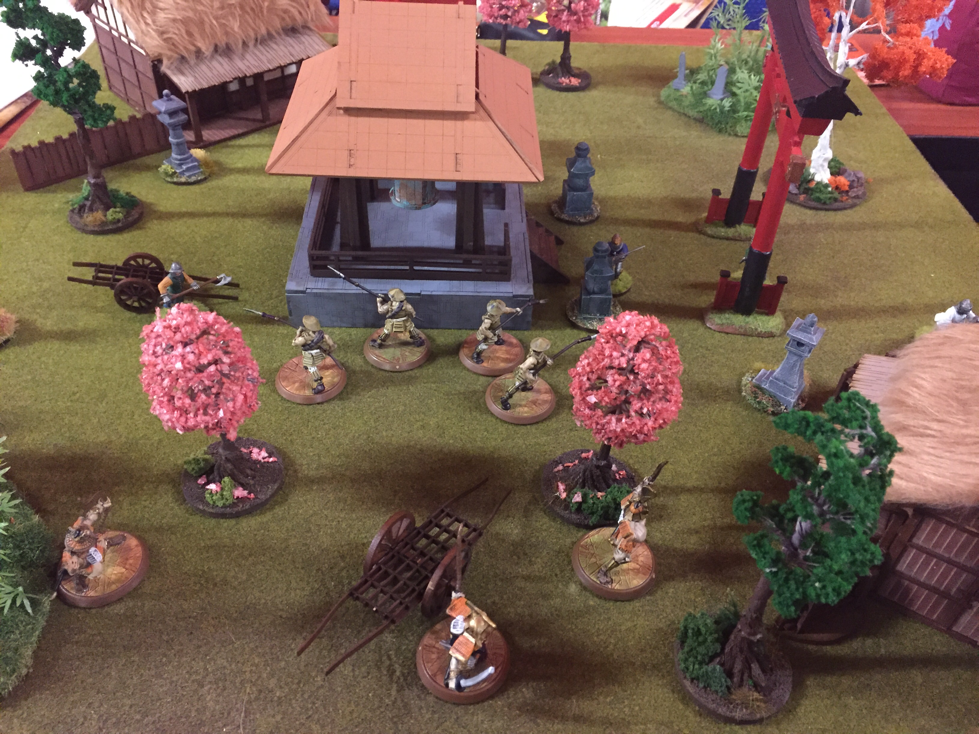 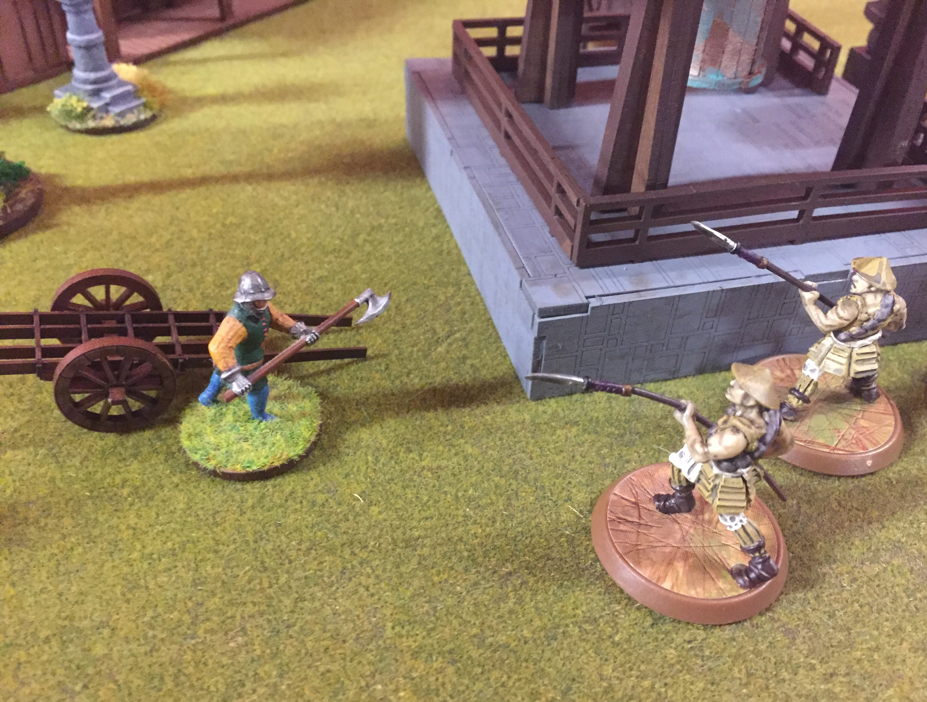 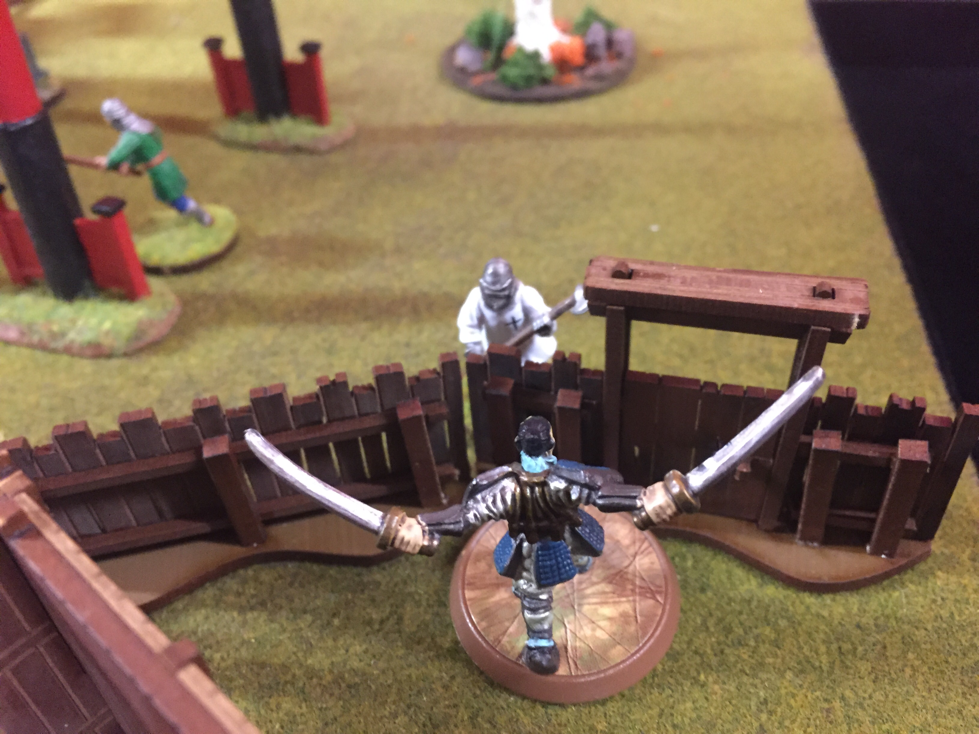 Game 3 against Nic and his annoyingly mighty Halflings. His archers opened the account with fantastic shooting taking out one of mine and his sword armed menaces took out my Ninja (he was stated up pretty rubbish though but I just wanted an extra figure and he looked cool)

The Flings were doing well but a run of bad dice allowed me back into it and my Samurai soon got the small fellows to hit their break point winning me the third game.

This was the toughest out of the 3 games but a cracking nights battle was had by all.

Open Combat is a quick, fun, easy system with quite a bit of depth to the game. Looking forward to the night lot of fights. 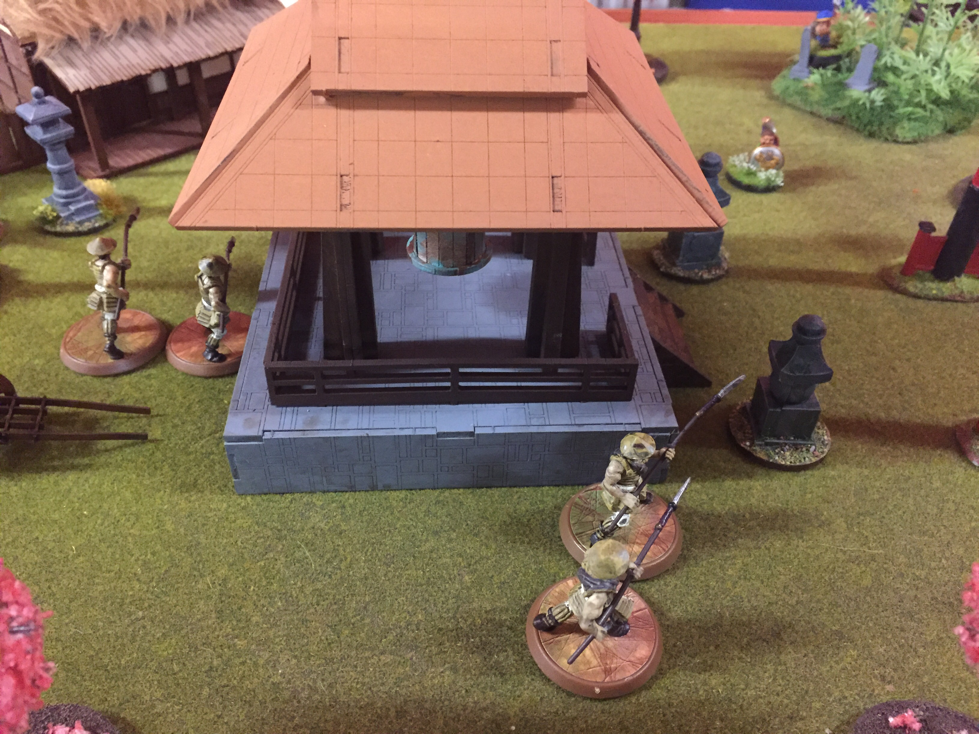 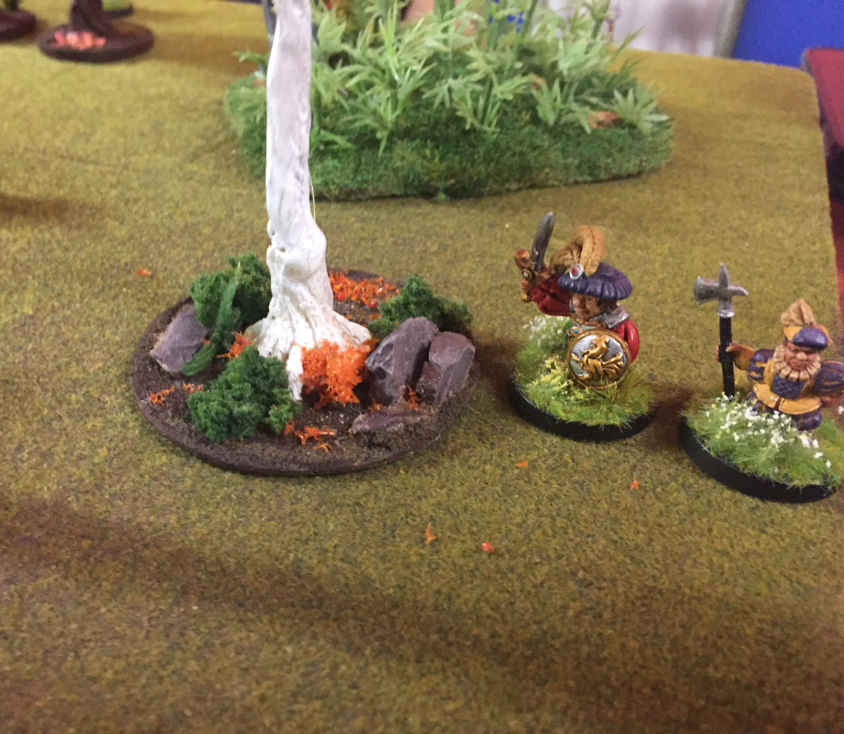 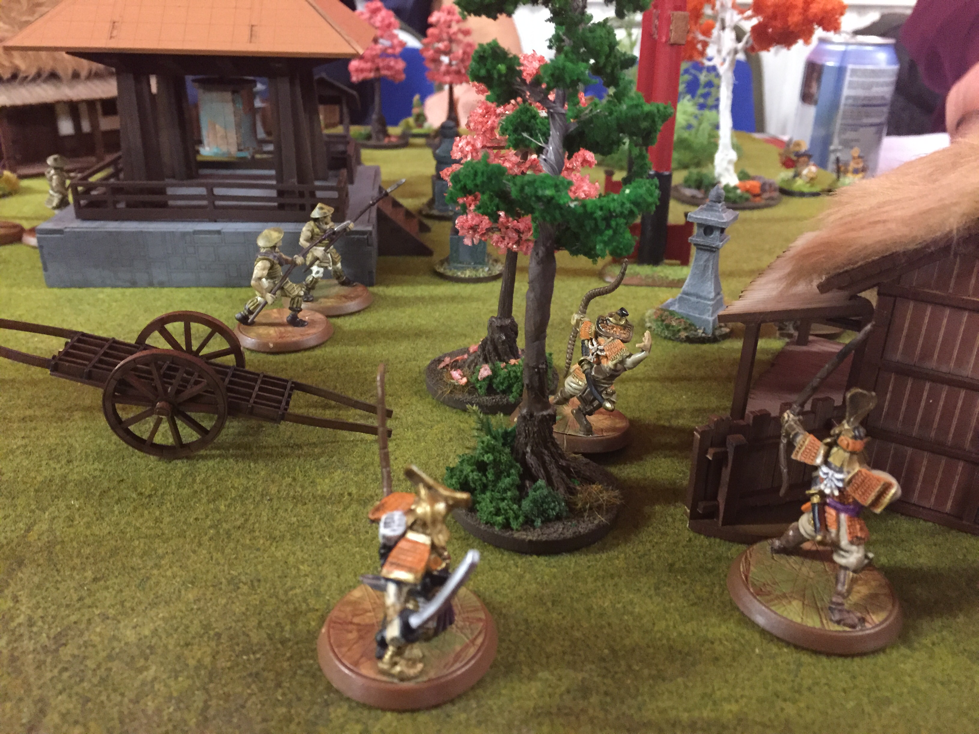 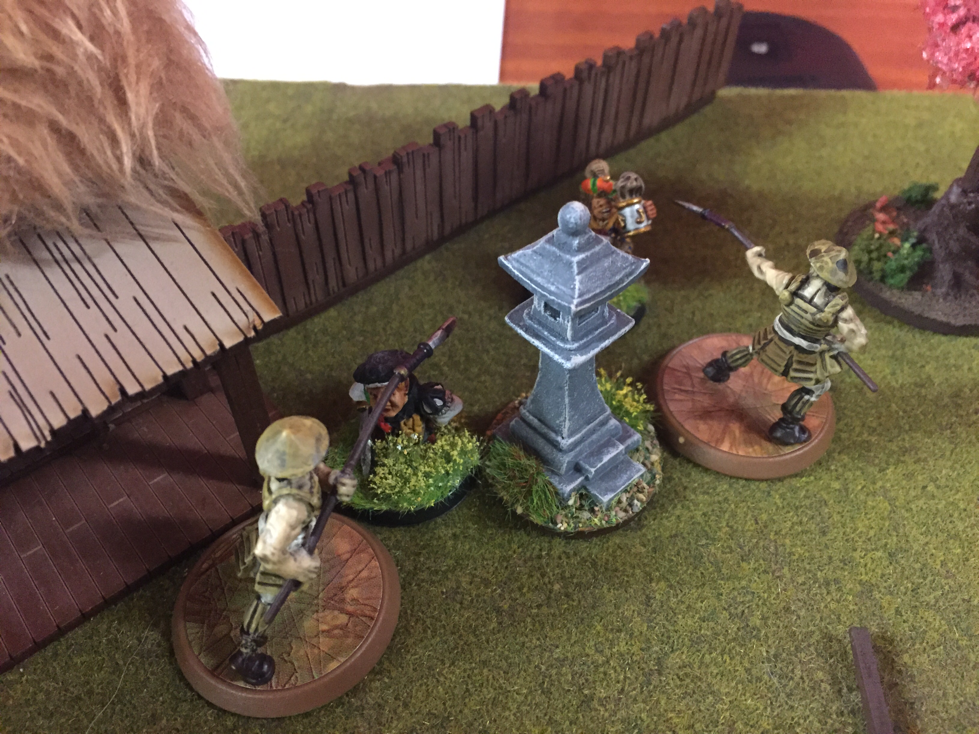 Saturday saw a few of my friends and I attend the Reading Wargames Club annual show Warfare.

This is a good small show with a decent amount of traders and demo/participation games available, as well as a large amount of tournaments also held over the weekend.

The main focus of attending was picking up my new Panzerfauste Dwarf Force from Hysterical Games. This was mainly due to their fantastic offer of 3 for 2 on their range of amazing resin miniatures. Also on display were some prototype models for their new Panzerfauste air combat system Spitfyre. This is currently on Kickstarter and is already funded and then some. The models look absolutely brilliant and I cant wait to get flights of War Eagles screaming across the skies.

The were a fair number of display/demo/participation games on and below are a few pics of a selection of these.


The last couple pics are of the game I had of taking out Tiger 131. This game was run by Maidenhead Wargamers and it was a cracking game. I played the British Tank force and with 3 Churchill's a Crusader and a Humber scout car faced off against 2 Tiger Tanks and a Panzer III.

The mission was to pin down and force Tiger 131 crew to bail out with out destroying it so the Brits could capture the Tank. (for the historical write up click here)

I was extremely fortunate (well im being modest! I was an armoured tactical genius!!) and managed to manoeuvre my armoured force quickly with two of my Churchill's gaining the high ground and rained down shots on the unsupported Tiger 131, the Panzer III being suitably destroyed sharpish like and the other Tiger made bad tactical errors (coupled with some awful gunnery dice) By the end of the game Tiger 131 was pinned to death with the injured and rattled crew running back to Sennelager and all other German armour destroyed. My losses, none, not a one, just a minor shaken radio operator on a lone Churchill.

For this I won some very nice dice that I had used for the game (they had reapers as the 6) along win a nice Reaper pin badge.

Overall a very good show. A bit tight on space in the isles between trade stalls. The bring and buy was its usual scrum and the level of some of the games on display was a bit poor with some of the members of these game more interested in moving and chatting about their own models than engaging with the public.

However all the people I spoke to and asked about their games and table were highly enthusiastic and engaging.

Also another point, it was really nice to see a high proportion of children and partners at this show. I look forward to the next one. 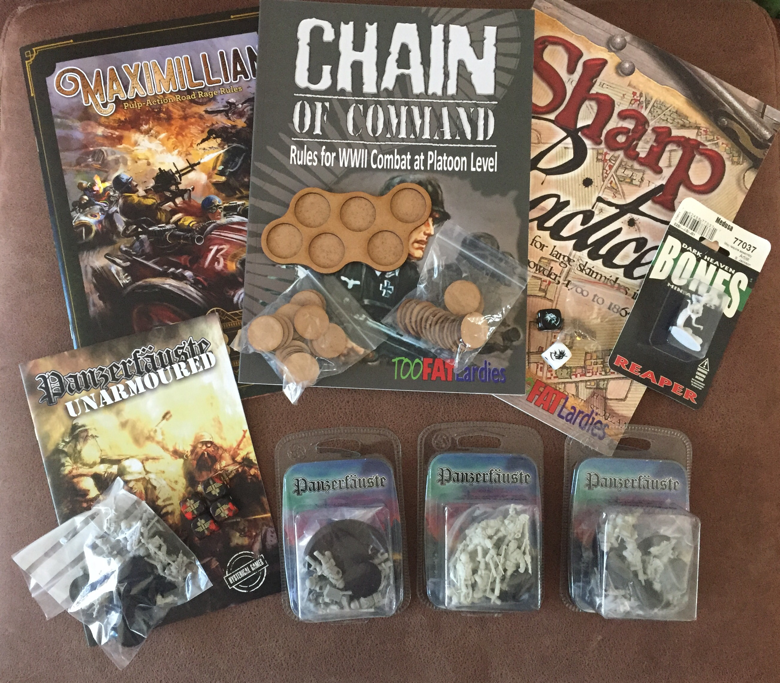