So far I have two large blocks of troops, one with Halberds and one with Crossbows. Leading these intrepid soldiers are a Captain and rugged Sergeant accompanied by a converted Standard Bearer.

Again the Standard Bearer is converted  from a Warploque Halberdier and an GW Empire banner. You cannot purchase it, but if your quick and go to the Boglin Bazar on Warploques website you might be able to pick up a special Standard bearer model as well as a few other specialities. I can especially recommend the Giant! 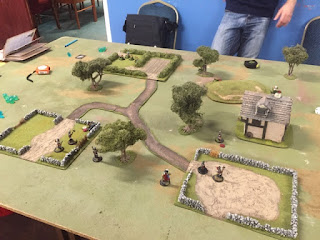 Last Thursday a mate of mine and I had a small tester game of Warploque Miniatures Fantasy Skirmish Game - Arcworlde. Arcworlde is a fast paced small scale skirmish game and includes a number of factions including Undead Pirates, Wild Elves, Bayorks as well as some rather large monsters like River Trolls, Cocklegriffs (mix of Cockeral and Griffin) and Dragons.
I have put together my force from the Albionnican faction - which are the Humans and roughly look like Napoleonic uniformed troops but with medieaval weaponry, Crossbows, Halberds and the like.
They can also field a Firelancer (flamethrower) as well as a hulking Ogre and a Mage amongst others. As this was a tester game to get the rules down I stuck with a 200pt force of Captain, Sergeant, 2 x Crossbows and 4 x Halberds. 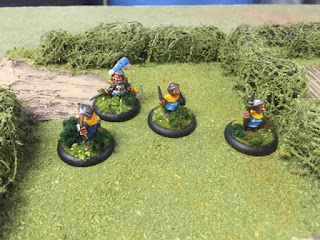 My mate Nic on the other hand decided to go with the Halfling faction. Pretty much the same as most fantasy Halflings and they can also field a Cook who can buff up the troops with magic recipes as well as a Flinger - a massive catapult! Nic again because its a tester game, went with a  simple build of Captain, Cook, 2 x Spears, 2 x Swords and 2 x Bows.
After setting up the table and deploying we decided to play a simple massacre scenario, which would gain victory points for the amount of points killed at the end of the game. As a starter game we decided to forgo sub plots etc and just stick with a main mission. We also scrapped the Epic Duels but Nic would be using magic with his cook. The first couple of turns ended fairly sedately as it was mainly movement and getting into position. My Crossbows having a longer range than the Flings bows managed a snipe shot but didnt hit anything due to the amount of cover available for the short arse hobbits. 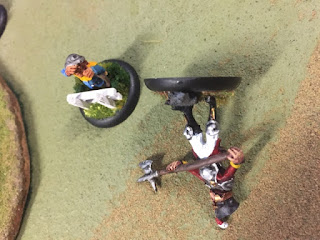 On the third turn things got interesting as I charged a Fling bowman with a Halberdier and managed to just woind him slightly, only for the short stuff rotter to shoot me in the face twice - killing the poor trooper on the spot!! The proud, noble, honourable Albionnicans became incensed and charged headlong into the Flings and much damage was done especially by my Sergeant who managed a double critical on Nics captain turning him into instant Fling sushi. 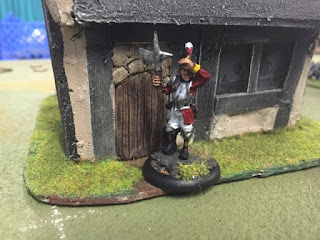 The game ran smoothly and simply and a good pace and much fun was had although we did realise we had completely missed out the cowardice rules on all occassions. Also Nic deemed that at this small points value the Cook wasnt really cost effective, maybe only buffing one or two characters in the game and they really needed to be bunched together for maximum effect. 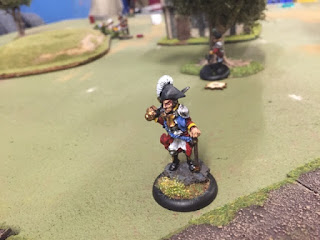 At the end of turn 5 we rolled (as per rules) to see if we got to play another turn. No we didnt (much to Nics pleasure as his Flings were dropping like...well like Flings hehe)
We totted up the points and overall my Albionnicans had won by 1 Victory Point.
A Very enjoyable game and we both look forward to revisiting Arcworlde and increasing our forces with some of the more exotic characters available.
Posted by Carl at 18:54 7 comments: