Welcome to the ring! The spotlights are on, the confetti cannons are loaded, and the mages have had their staffs taken away. The world of RUMBLESLAM awaits! The original game of fantasy wrestling is here. Join in on fast paced high action gaming as Goblins jump off the turnbuckles, Dark Elves bounce from the ropes, and Dwarfs pick up Werewolves to throw out of the ring!*

Rumbleslam is the fantastic fantasy wrestling game from TT Combat.

Here are my Rumbleslam teams (painted by the amazing Littleninjapainting)

I had my first game of Imperial Skies a few nights ago and absolutely loved it. It was really simple getting to grips with the basic rules (we didnt use altitude etc) and the combat resolution mechanics. 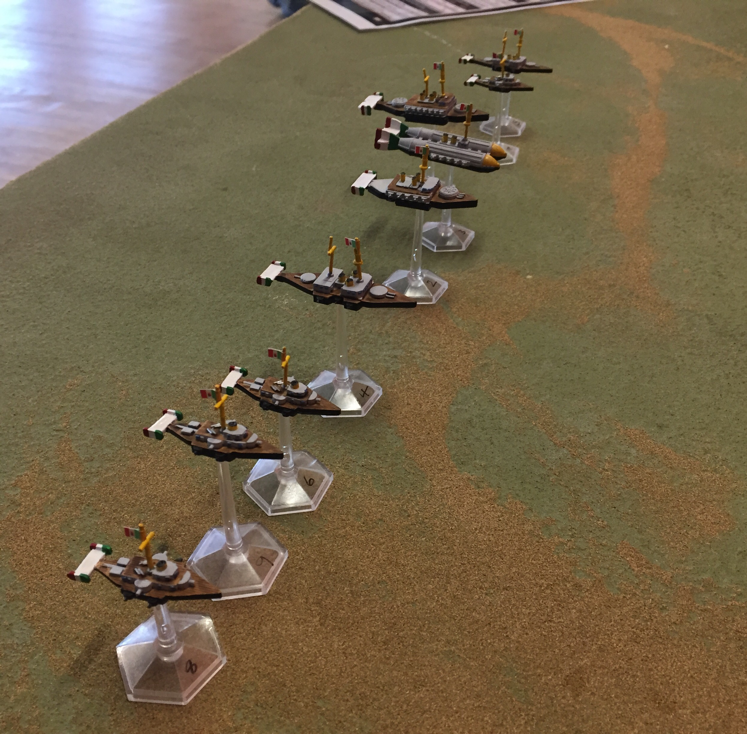 Turn 1.
Playing a straight fleet action we deployed our forces opposite each other. The Royal Navy gained first initiative and sent its fleet forward and its Sopwith squadrons to antagonise the Seaplanes of the Regia Marina. The Italians responded by moving their fleet to engage and the Blimp Florentina floated up the middle and lay a broadside against HMS Solid. The resulting cannonade downed the light RN vessel.

On the left the Battleship Guilo Cesare also opened up with a huge salvo which blew HMS Aphrodite out of the sky. First blood to the Regia Marina and the Royal Navy's Fleet commander muttered something about their being something wrong with his bloody ships!!

Turn 2.
Gaining the upper hand the Italian Admiral issued his orders and the fleet advanced into better range. re d'Italia downed HMS Arathusa on the left whilst San Martino with some pinpoint gunnery took HMS Sturdy down. With the ranges reduced it was now time for the Royal navy's famous gunnery skills to reply and they did just that, quickly destroying Confienza whilst HMS Benbows Sopwith CAP dived upon Pisa severely damaging her.

All the time the fleets were engaged the opposed a huge dogfight was taking place on the flanks of the battle.

Turn 3.
Now it was time for the British to take control of the skies. HMS Benbow let rip and a fusillade of massive proportions lit up the sky, disintegrating the unfortunate frigate Solferino. In return Guilo Cesare mauls HMS Benbow with some raking fire. HMS Exeter surges across the sky into the path of Georgios Averof and destroys her. The Battleship re d'Italia exacts some revenge and nearly destroys HMS Exeter, leaving the British Cruiser crippled.

Turn 4.
With the battle swinging each way, the Italian Navy makes a push forward to capitalise. The Blimp Florentina finishes off the Exeter but HMS Steadfast screams past and with a deft broadside, downs the Blimp in return.

San Martino then moves alongside HMS Steadfast and sends her crashing into the ground. The swirling dogfight continues with planes dropping out the sky on both sides but slowly the Italian pilots gain the upper hand over the RFC.

In the failing light both fleets look at disengaging but the parting shots are particularly devastating resulting in Pisa being downed on the Italian side and HMS Staunch, Steady and Cambridge, destroyed on the British.

The Royal Navy stoked their boilers and headed away leaving the skies in Italian hands. 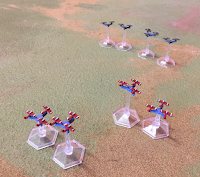 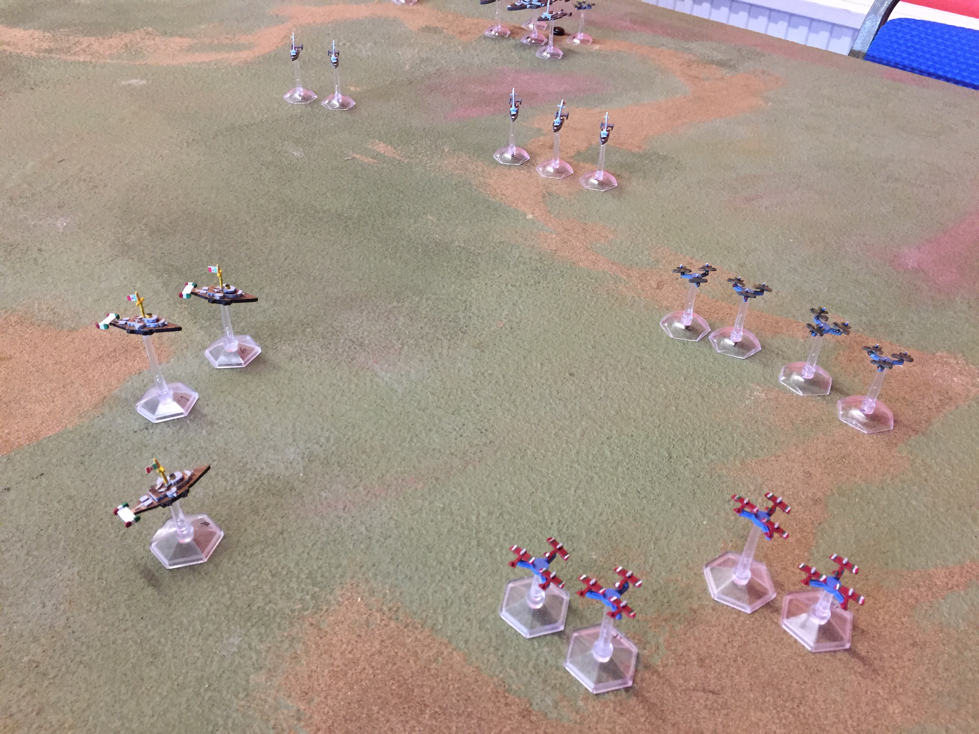 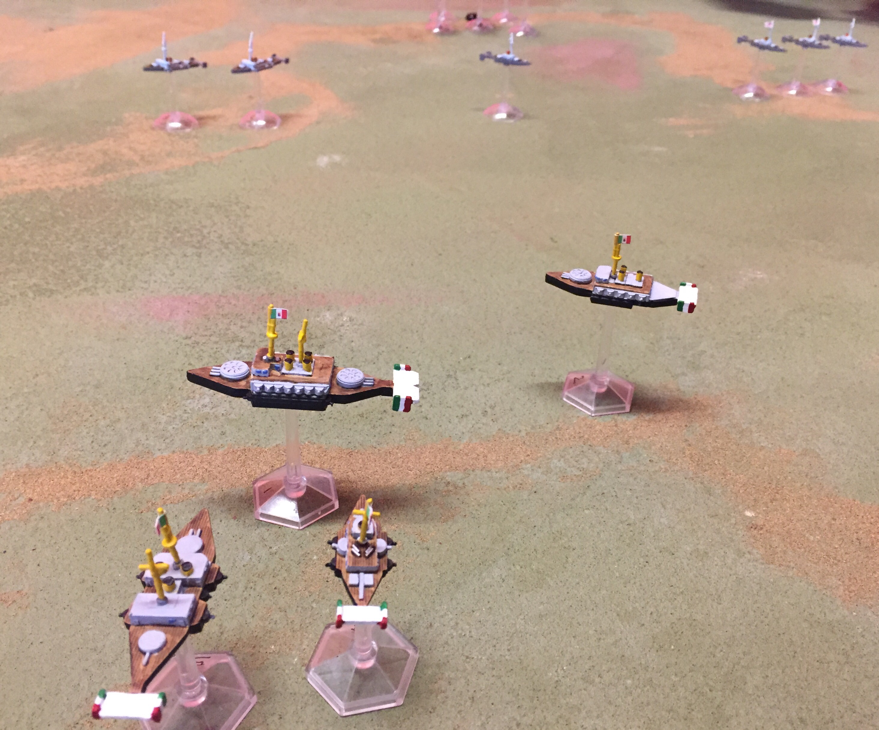 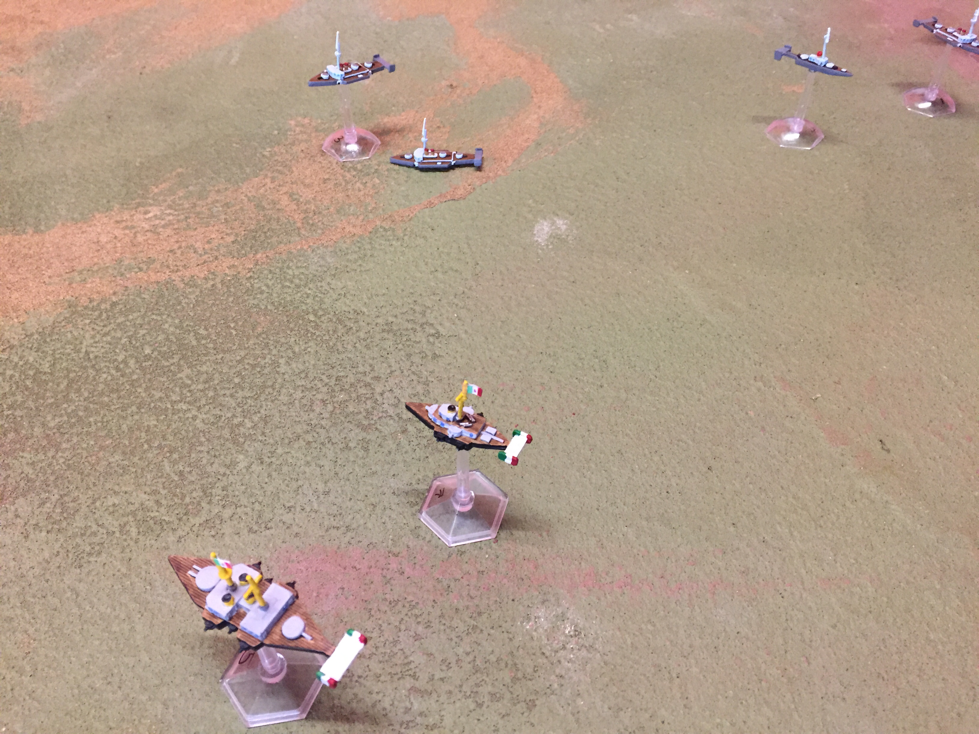 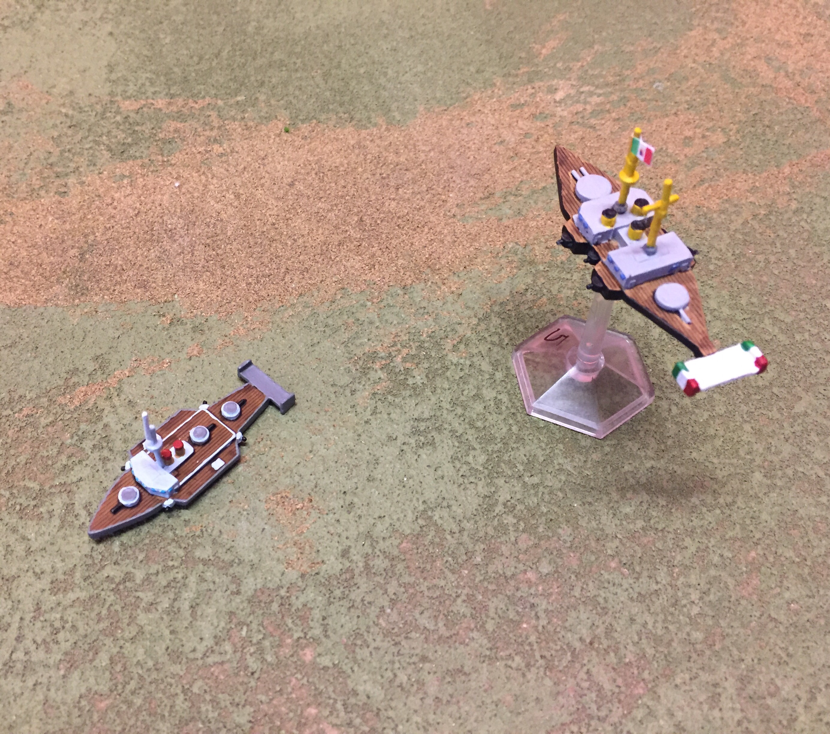 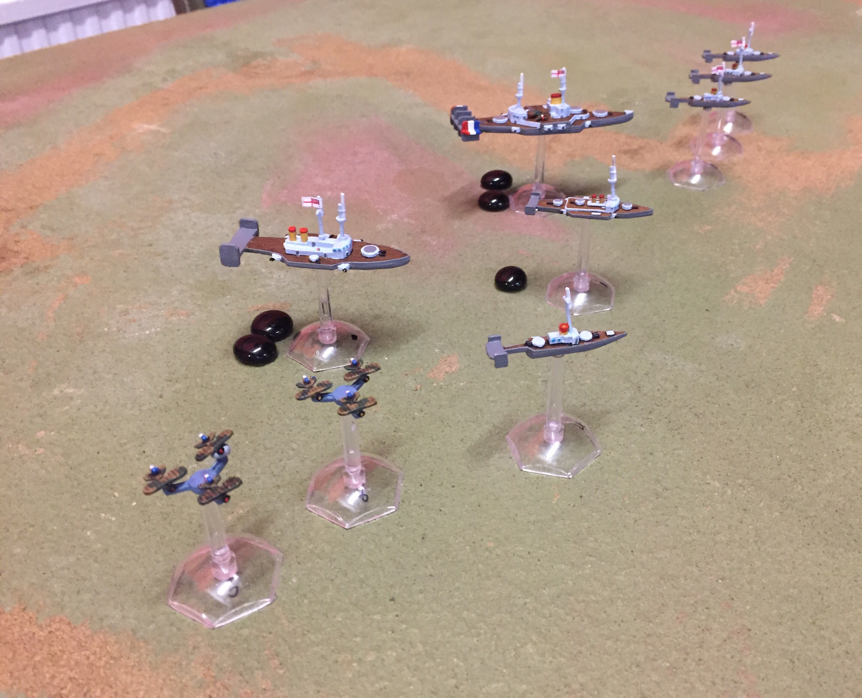 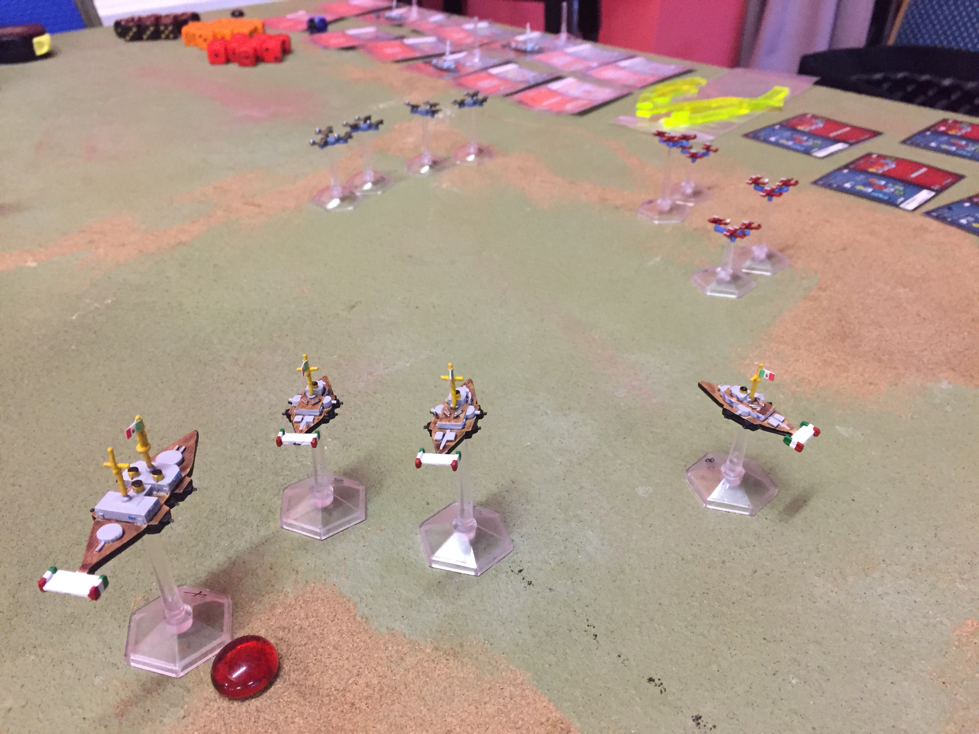 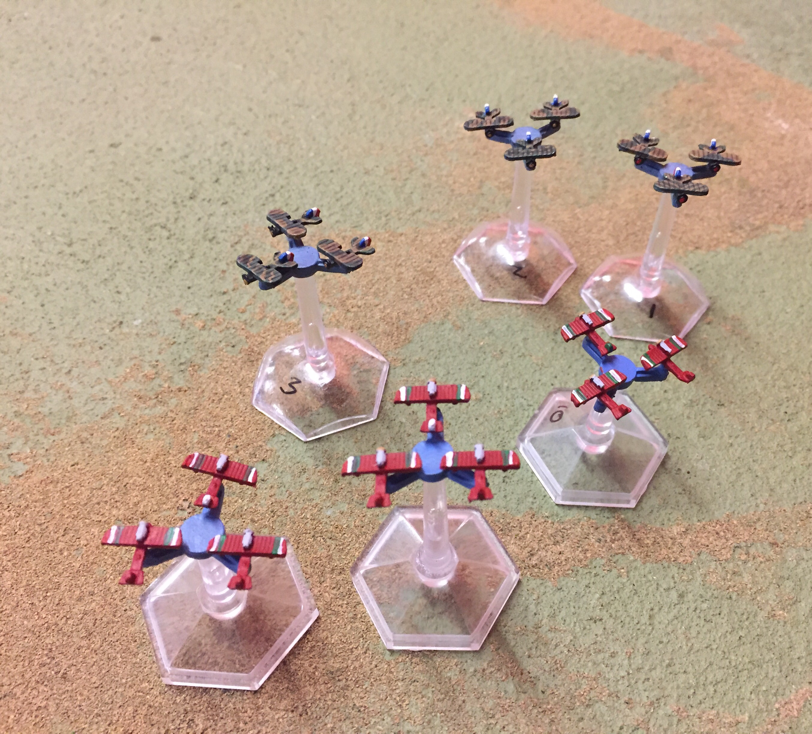 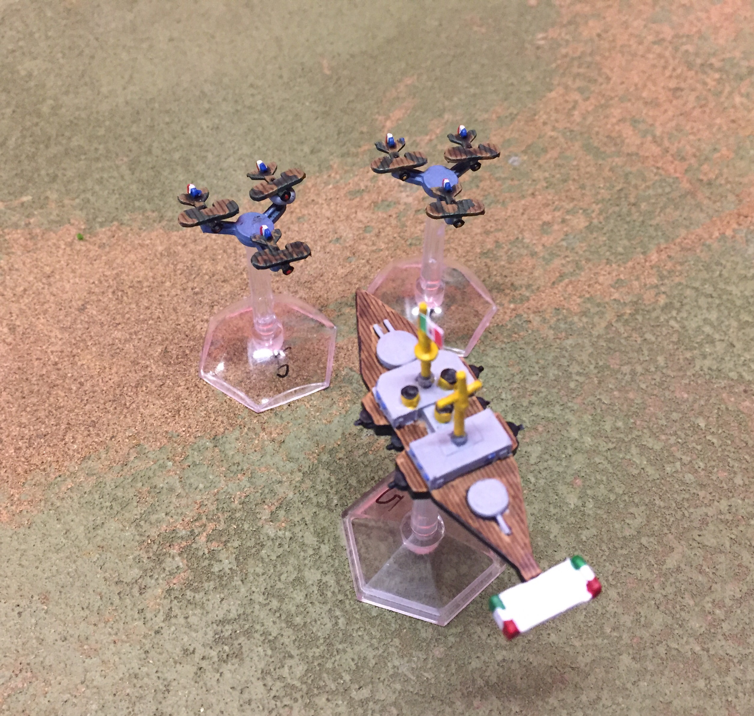 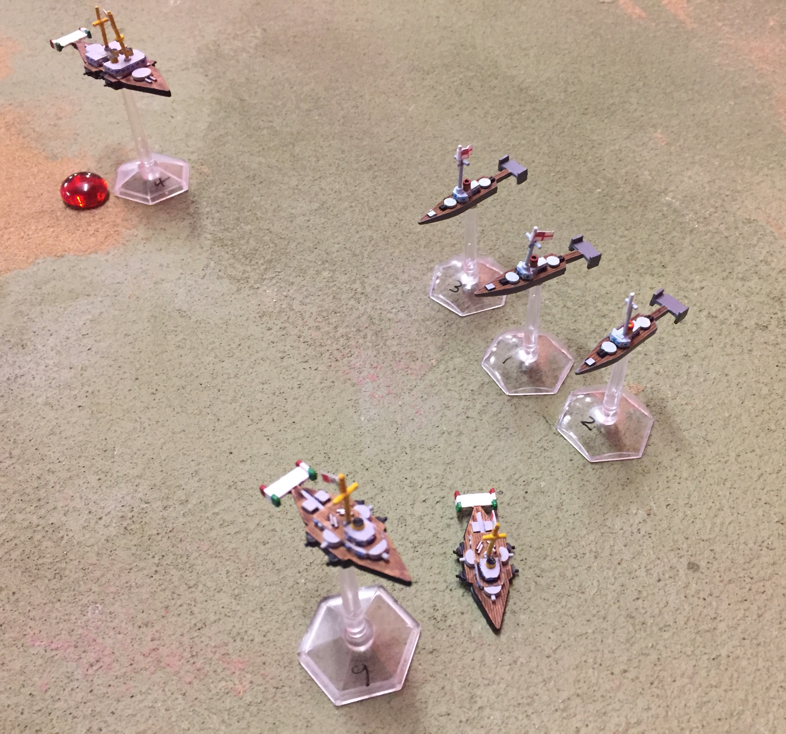 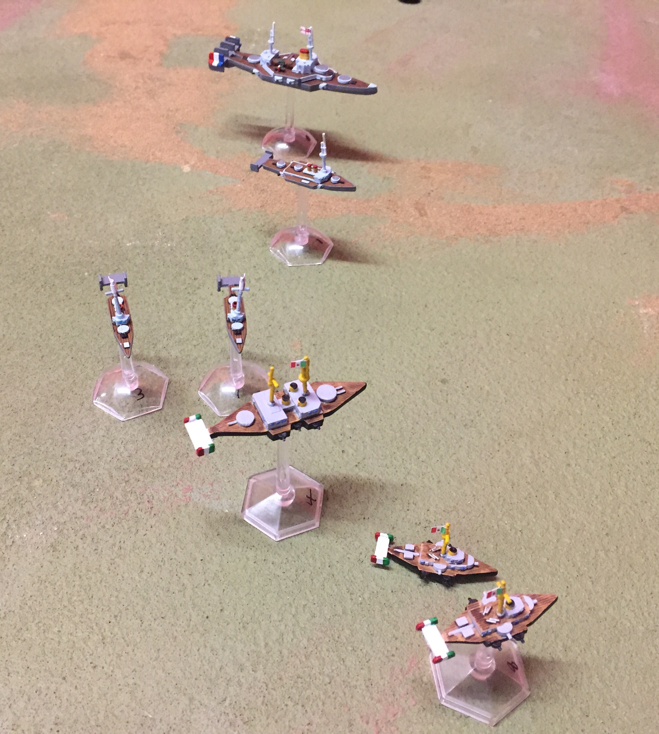 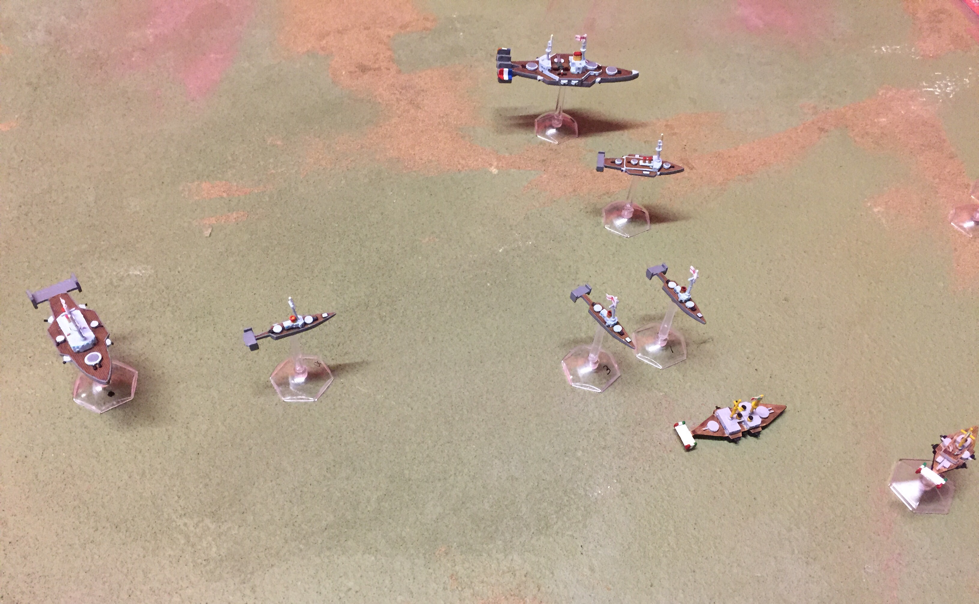 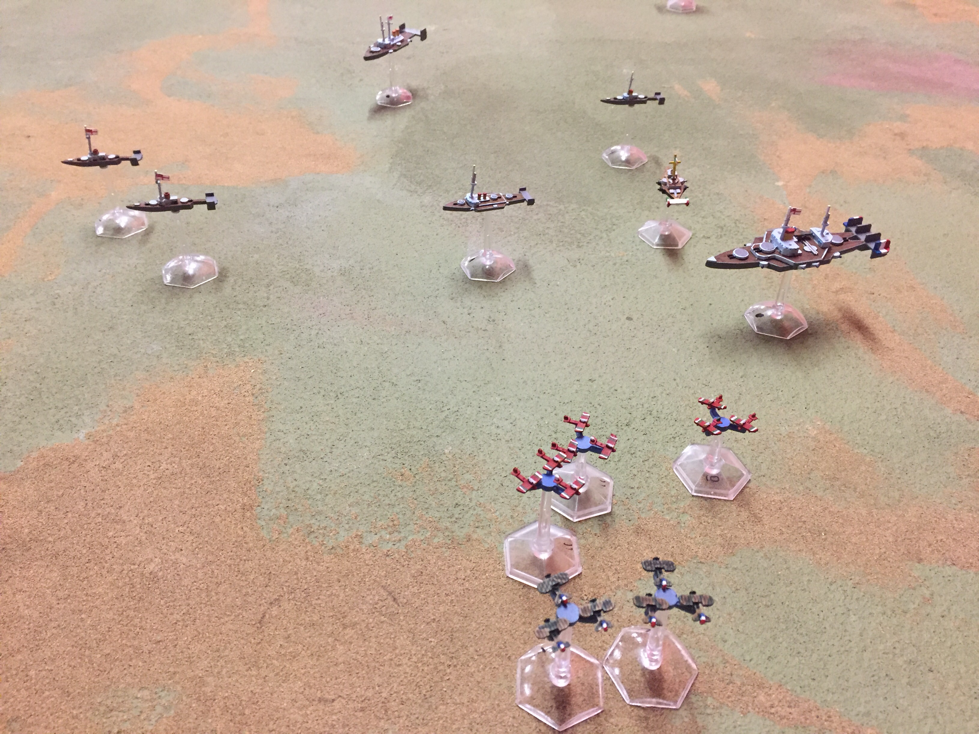 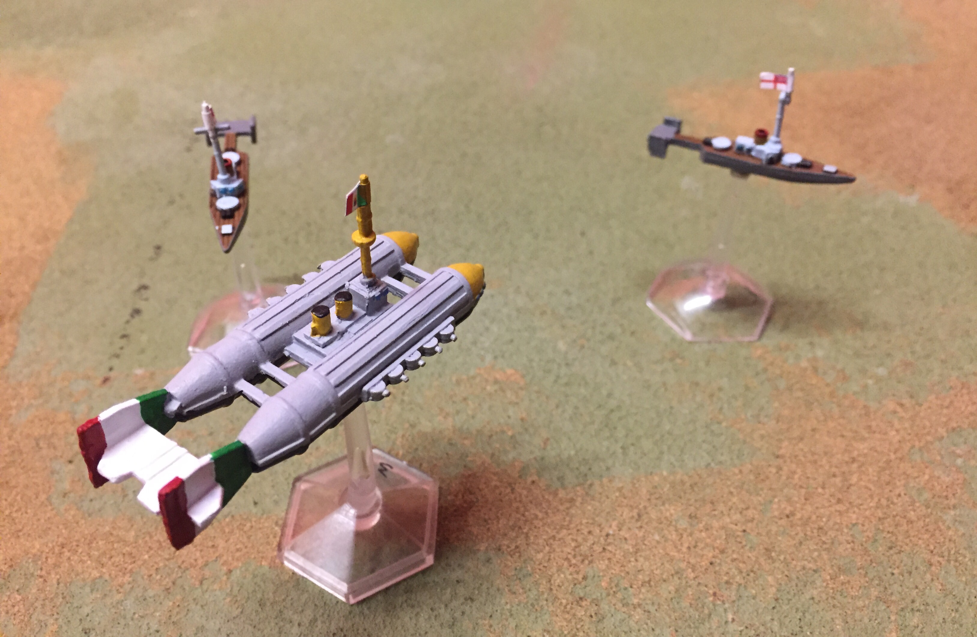 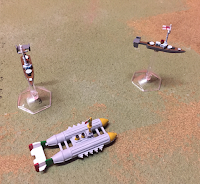