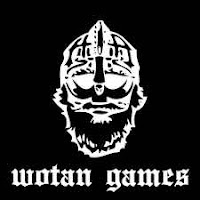 Last Sunday I attended the 2018 UK Games Expo and had a rather splendid day out. During which I got to collect my copy of the new board game - War of the 9 Realms - from Wotan Games that I pledged for on Kickstarter. As with most Kickstarters this over ran slightly but not so much that it was annoying or an inconvenience.

War of the 9 Realms is a hex tile based tactical skirmish game based on the Realms of Norse Mythology with each realm  comprising of different races/factions containing unique characters and their wondrous abilities. The game allows you to pit these factions against each other in a bid to claim total victory over the Realms so that the victor can reshape the World to their own designs.
Each Realm has a choice of Heroic or Epic play styles that focus on either raw power or tactical advantage.

Heroic has simple abilities but is harder hitting. Epic adds advanced abilities and lore based content. 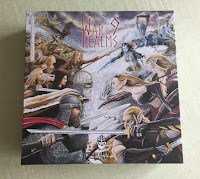 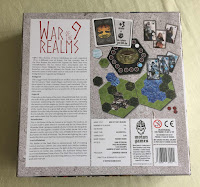 So what do you get with the game. It comes in a very nice sturdy box with some fantastic artwork on the cover depicting the warring factions. This artwork also wraps around the sides of the box.

The rear of the box is unfortunately not as well presented. There is a brief description of the factions, a small illustration showing some of the contents in the box and the usual number of players, amount of time it should take to play info. It has no list of actual contents and although the brief on the factions is a nice read it does not actually give you the blurb what the game is about. I talked to Wotan and they are understandably a bit miffed on these omissions. Which I was informed would hopefully be rectified in further print runs. 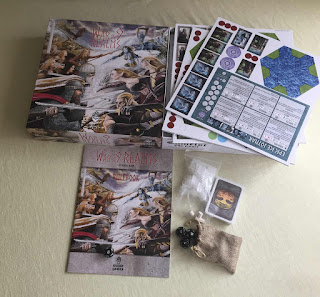 So what do you actually get inside the box. The game runs on twelve sided dice for combat and you get 10 of these as well as four activation counters, for movement and combat which go on the activation trackers of each of the four Faction cards. A slim but well laid out and illustrated rule-book. A deck of fate cards which give extra abilities when your characters act and a stack of thick punch-boards containing the hex tiles, character standees and various tokens.


All very well printed and should hold up to long term vigorous play. You also get enough plastic bases to mount each realms nine individual card stock figures.

The Rule book. Again as mentioned, is slim but packs a lot in. Very nicely laid out with easy to understand rule mechanics and nicely illustrated with artwork and examples of game play and board design. 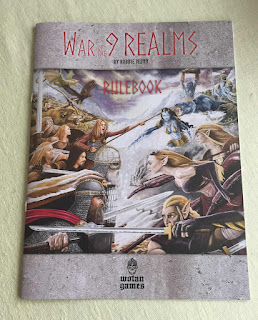 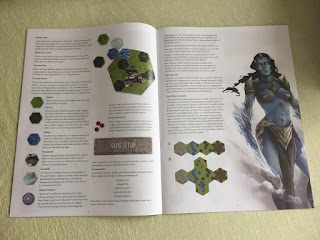 Dice, Plastic Stands and Activation counters. The dice are black, with white inlay numbers and come in a hessian drawstring bag although I believe the retail version will not have the bag. Plastic stands are well plastic and the card character standees fit snugly into them. The activation counters are about a centimetre high, wood and in a hex shape. They fit nicely on the activation pool tracker on the faction cards. 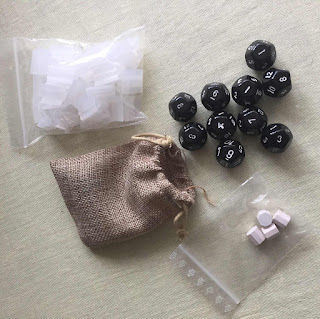 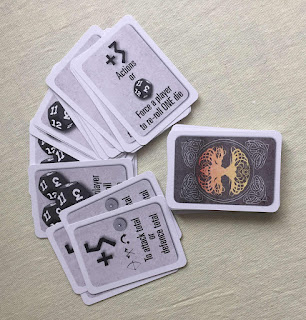 The Punch-boards. Eight punch-boards, good thickness to give a longevity to the terrain tiles and various character cards and tokens. Also includes the blood cauldron (bottom right) this is the victory point tracker mechanism, whoever fills up the cauldron first wins. All extremely well printed and illustrated. The faction character standee cards are beautifully illustrated and colour coordinated so you can see who is in each faction. This is a nice way of distinguishing the factions as the cards do not have any faction symbols. 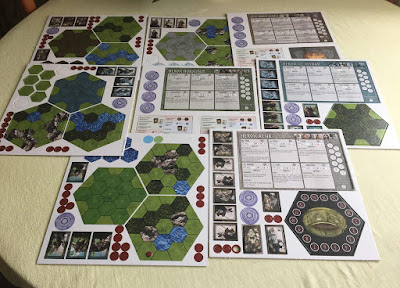 The Factions. As you can see from the picture, the illustrations on the units and characters is lovely. There are four factions: The Aesir (Norse Gods), The Dark Elves, The Norsemen (Vikings of Midgard) and the Jotunheim (Ice Giants/Trolls). Each faction has a leader, four characters and a unit of four troops. 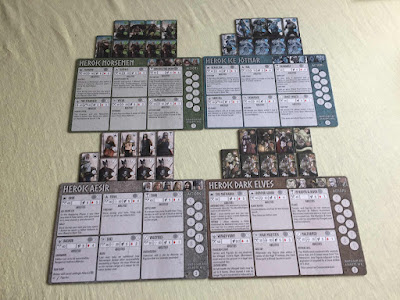 So that's a review of whats in War of the 9 Realms and a slight overview of the game. Overall the game is listed as being balanced to mix Heroic and Epic styles together, giving even more playability options. I look forward to getting this game on the table soon and having a good run through.

Very pleased with what I pledged for and received.
Posted by Carl at 09:50 1 comment: