Tor Gaming have cracked their published target and are now breaking through their stretch goals quite quickly.

The first 3 have fallen which means the following will soon be available. If the next one goes, The Orcnar Ealdmolder - on top of the models being available, Tor Gaming will preview (TO BACKERS ONLY - incentive) four brand new profiles.

Thats one new profile per faction available so far. 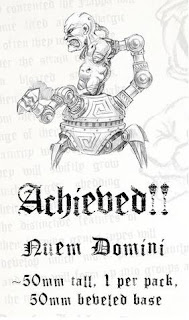 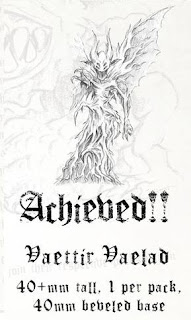 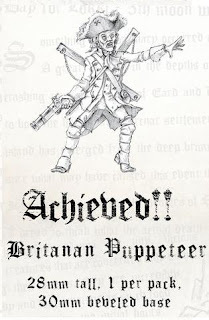 Also mentioned as a stretch goal are casualty markers. This is a mock up of a Varrier for the Vaetirr faction. Listed as being possibly available as 5 markers at the Marksmen pledge level. 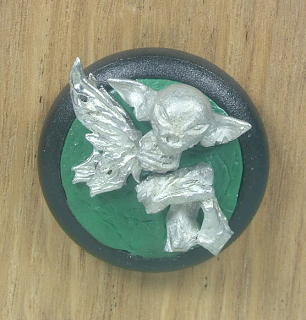 You can find the kickstarter here.
Posted by Carl at 18:36 No comments:

Following on from my first post for my Relics Britanan Force I have now finished January's additions. These consist of: 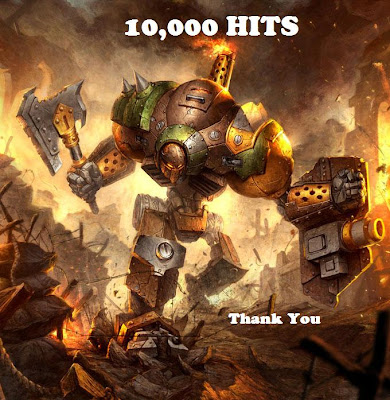 Wow, absolutely blown away. I now have 40 wonderful lunatics who actually follow my general ramblings and periodically submitted pictures of badly painted lumps of metal of plastic.

Also with still over 2 months till my 1st Anniversay Blogging I have hit the dizzy heights of 10000 HITS!

Thank you to everyone who has taken the time to look at or read my blog and to all that have left comments as well.

The first Bloodbowl game of 2013 for Atrocity and the penultimate game in the league, before going onto the finals. 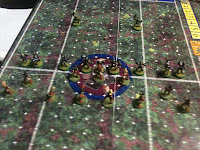 Atrocity was going up against the Shadows a fast, agile High Elf team, that could also hit hard! Stuart their coach was a guy I have know for many, many years but I hate to be personal but I really dislike playing him as he is 'one of those guys' we spend more time during the games with him questioning every move, every rule (even though played the game for years!) and looking a copies of rosters just to make sure you do have the skills you say your using! but complains when you wish to check.

I never usually complain about an opponent as I treat games as GAMES - win/lose/draw/utterly destroyed etc... our hobby has ups and downs. One game you will roll 6 every time and wipe the floor with the opposition - other times you will role nothing but double 1's or double skulls. Hell one Bloodbowl game in a large tournament, every 3 dice block I threw ended up Triple Skulls!!!

Anyway onto the match. Atrocity once again overwhelmed the stands with a horde of undead fans and even the pouring rain couldnt dampen their spirts (ok bad pun) 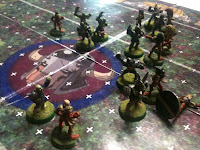 The High Elves positioned their defence and readied themselves for the onslaught. The ball was kicked and as it floated in the air the clouds parted revealing clear blue skies. one of Atrocitys ghouls collected the ball and the drive was on. Pointy Ear'd Shadow players were thrown around the pitch and even a few were KO'd off the pitch but half way through the drive, the Ghoul with the ball got overzealous trying to help out a Zomibe putting the hurt on a Shadow Linesman and was caught out of position. One Fairy Elf slap later and he hit the deck, the ball popped free and the Shadows Thrower in perfect postion scooped up the ball, danced out of range of some Zombies and popped a short pass over the Undead line to a loose High Elf Blitzer.

Unable to catch the fleet footed Blitzer the Shadows ran in to score TOUCHDOWN! 0-1.

Atrocity seething at their blatent mistake howled into the Elves and started to really dominate the last part of the first half. A Wight took out a Lineman CAS and one of the Mummies ripped apart a Catcher CAS. 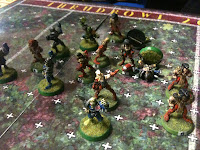 With a diminishing team, the Shadows couldnt keep the Undead tide closed down and finally right at the end of the half Atrocity scored TOUCHDOWN 1-1. 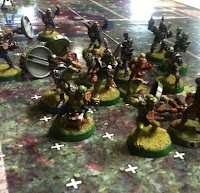 Secend half and Atrocity kicked to the Elves. The ball sailed high into the air and then dropped into the waiting hands of the Shadows Thrower. A few unbelievable dodges through a dense Zombie defence saw an Elf player loose again and soon with their constant high agility the Brimstone Shadows scored again TOUCHDOWN 1-2. 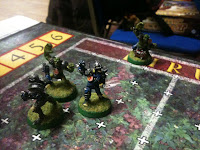 However, dont leave the mighty undead time to come back into the match as you might regret it. Atrocity spent 6 turns smashing, fouling and generally ripping apart the High Elves, more CAS and KO's depleted the danger of dodging pointy ear'd freaks holding up Atrocity and one massive gang foul resulted in a poor Elf Lineman being KILLED and ZOMBIFIED! Atrocity at this time had no problems finally running in to score TOUCHDOWN 2-2.

So a draw at the end. I could say I should have won but made the mistake in the beginning with the Ghoul ball carrier, but truth be told I made the mistake because of Stuarts whining right from turn 2 and just wanted to cripple his team! Its Bloodbowl - it wont always go the way you want and as I said win/lose/draw its just a game.

Next week, Tor Gaming will be introducing a new kickstarter campaign for their game system Relics.
For more information about the game, see my blog review here.

Tor Gaming have made changes to the way pledges work compared to most campaigns. Each direct pledge will give you money to spend in the Relics kickstarter online store to the value of your pledge plus a percentage extra, the Britanan list is shown below as its my main force and you can see some of my painted miniatures here. The top two pledge levels offer some special rewards for anyone who fancies lunch and some games with Gavin Moorcroft (Tor Gamings boss and the creator of this deranged StitchPunk world of Relica) and for £750, you get to be made into a Britanan puppeteer figure, your 28mm avatar will grace tabletop battlefields everywhere!!! 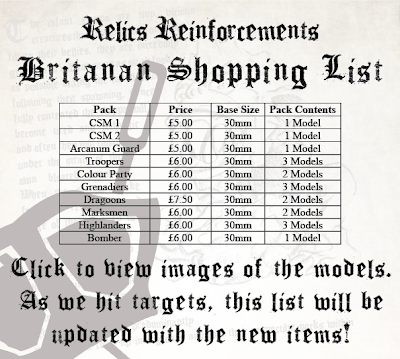 As you can see in this llist, all the current ranges are displayed, as are some that were unlocked in the previous Indigogo campaign (I got a lovely ammount of the New Faction Nuem), and it shows the Bomber, which is one of the primary goals for the campaign. I already own the majority of these models, but if we look at the list as an example, you could order the CSM1, 3 packs of Troopers (as the unit max is 9 miniatures) the Colour Party, a pack of Grenadiers and two packs of Dragoons (full unit of 4) this would come to £50, as you get a bonus amount on top of your pledge to spend you could then add one more pack for free.

Like all campaigns, Relics kickstarter has a main goal outlined from the start, and when the inital goal is reached, stretch goals can be added and if these are smashed more goodies will be unlocked.

The project target goals are shown below:

When this goal is reached, the first Stretch goal unlocked will comprise of the following models for our joy:﻿

Smashing stretch goals and pouring cash into Tor's coffers will enable the sculpting of more profiles from the rulebook.  Gav tells us that should the campaign surpass that level then it will enable the sculpting of the first models of the planned new factions for the game; The Ridend (Beaky Goblins) and the C'thu! (Tentacles baby)
As you can see from my review post and the paint along with Gav every month, I am committed to getting a decent ammount of miniatures and having a long involvement with this game. I encourage anyone else to get on board.
Its a cracking game!
Posted by Carl at 21:45 2 comments: 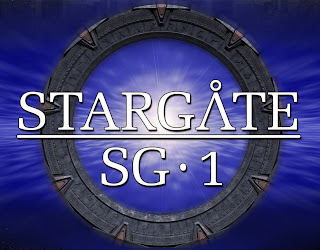 The Butterfly Effect has well and truly taken over again. After watching the whole 1st season of Stargate SG-1, I went on the hunt for the elusive Stargate miniatures and finally found them at Cold War Minis.
I have decided after ordering a fair few Jaffa and the SG-1 team to adapt these to the fantastic Cult TV rules 7TV from Crooked dice.
This is never going to be a massive project but I want to be able to run reasonable sized Skirmish games/Scenarios with either just SG-1 and maybe an extra few indigenous souls against a Goa'uld and a few Jaffa assault teams.  So in reality I will be looking at a maximum of about 10-20 miniatures a side.
All l I have to do now is delve into the 7TV rulebook and start adapting the Heroic and Villainous profiles to Stargate, paint my stuff once it arrives and build a Stargate model (papercraft to begin with as the miniatures cost enough!)
﻿

﻿
I have just completed my first couple of Warjacks for my foray back in to Warmachine along with a Journeyman Warcaster.

﻿
The Journeyman is a Solo character who can take the pressure off you Warcaster and comes with an indispencable 3 focus as well as the spell Arcane Shield. This spell is pretty much cast every turn and definitely upkept!

﻿﻿
I have done two heavy warjacks and two light warjacks. The heavies are the ubiqutous Ironclad, a big brute with a quake hammer that can knock down opponents and a Stormclad, which is very good especially if your including Storm Knights or Stormguard infantry.
﻿

The two light jacks are the ones that come with Cygnars battle box (which also includes the Ironclad)- the Lancer, a lightjack with spear and shield and also an Arc Node, this allows spells to be chanelled through the jack for better range, and the Charger, which houses a dual shot cannon.

Welcome back to Warmachine 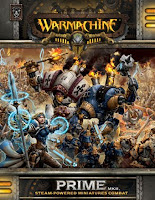 Well its a few days into January and I have just finally finished my long stint of 12 hour shifts all over New Year (well I did have all Christmas off) so Happy New Year to everyone. 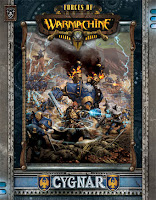 As its the New Year and I have updated my project list for 2013, I thought I would make a start straight away on a game I used to play - Warmachine!

I started playing this way back for the first couple of years it was released and began with the Cygnar Faction starter which included the Warcaster Colman Stryker and Ironclad, Lancer and Charger Warjacks.

After the local club on my Military base folded I pretty much mothballed my stuff, but at Christmas I was gifted a Warmachine Mk2 collection of books, so yet again I will don the colours of the Golden Swan, roll out my Jacks and play like I have a pair (and most probably get ground into the dust looking at all the new uber toys I still have to buy) 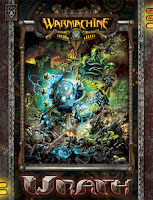 As you can see by the pictures, my Xmas haul of books included Warmachine Prime Mk2 Rule Book. Warmachine Forces of Cygnar and Warmachine Wrath. Wrath was the first expansion for the Mk2 ruleset and includes new units/solos and best of all new Battle Engines.

The Cygnar Engine is a Storm Strider as illustrated on the front cover. This massive walker houses a huge storm chamber, spitting out crackling electro death to Cygnars enemies.

I have just ordered the new book Warmachine Collosal and should have this shortly although I will have to wait to actually buy one of these £80 odd monsters!!!
﻿