MERCS Miniatures have just posted up on their forum new concept art for the upcoming ISS faction that is due to be released along with the Texico Faction.

ISS Myrmidon - First thing you need to know is that they are lethal in short range, just flat out devastating. The concept for them from the beginning was to play upon the flavour and nature of the matador. ISS must close the distance, but not let the opponent get in too close. They can fire at long-range, but this isn't their strength. Likewise, they have the ability to survive in hand to hand combat, but this isn't where you want to be. If a target is coaxed within short range, then yahoo, go to town!!

Stated as an European/Mediteranean faction.

Leader - Combat Shield and an machine pistol with special rounds. 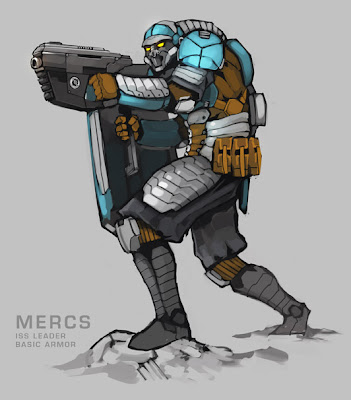 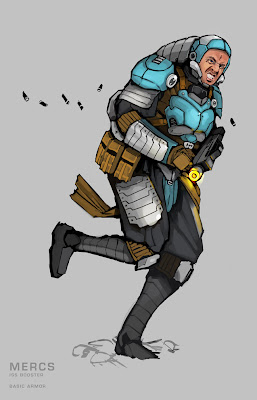 Calypso - ISS unique. The Trident is a melee weapon, but that isn't what make it special. It can be targeted by the lightning thrower to extend range or attack around cover/corners. She also has a nasty AoE surprise. 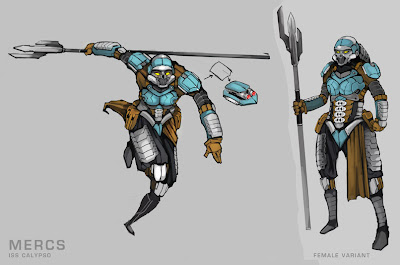 Heavy - Lightning thrower that jumps targets with diminishing strength and armor failure with each jump. 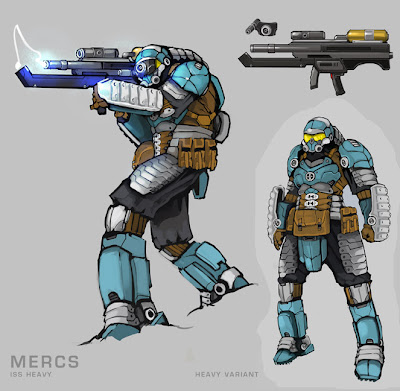 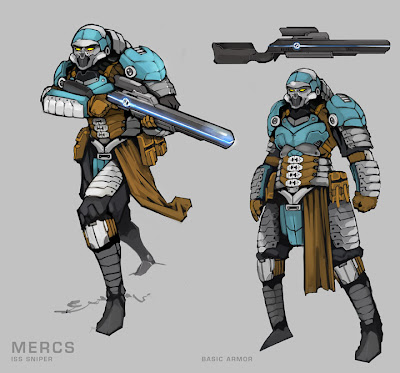 Wavefinder - This the ISS version of the Pathfinder archetype. Single Shot Rifle and can drop an auto turret. The automated turret is always on Overwatch. 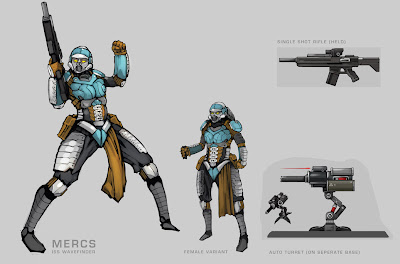 I  must say, I am absolutely blown away by the concepts for this faction and the colour scheme matches the unique abilities and background of this faction.﻿

I have recently started to run out of some of my favourite paints and washes and took a trip into town to replace them. Now I have heard on that there grapevine that GW have yet again changed things and gone and replaced aload of stuff that was good with more stuff thats not so good and with different names (sarcasm)

Anyway this short post is to help anyone, who like me has had a wee bit of a nightmare matching up these weird and wonderful shades. Plus a quick not at the end as to what I think of them. 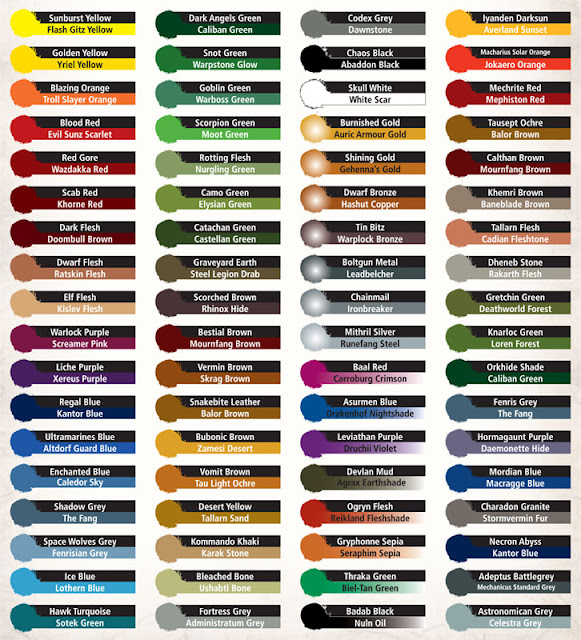 The base colours are not as thick as the old foundation paints but your best still thinning them down with water to get the right results. Some of the best of these are the new gold paints which are brighter and go on better than the old range.

Some of my initial purchases were maily washes and I have to say these are the most disappointing. We all know that Devlan Mud and Badab Black are the bee's knee's but unfortunately the new Nuln Oil is a bit thick and does not flow well in my opinion. I find I have to end up watering it down and spending more time getting the flow right than I used to do with the Badab stuff. Agrax Earthshade is ok, but not a patch on Devlan Mud. The shades don’t smell or taste as bad as the old washes.

The layer paints are designed to be used in stages from the basecoat to highlights and hopefully will make it easier for beginners and quick army painters.  Very much like the Foundry paints system. Not used these yet, time will tell.

The new glazes are like the old inks of GW but dry completely matte.

The dry paints are weird. They have a thick consistency and supposed to be for quick drybrushing. I don’t think I'll be venturing into this range soon unless highly recommended.

The texture paints are a paint grit mix and from what I'v seen on others models, look good for quick basing of figures. They seem to cover quite well and I think will be useful for adding different textures to more intricate bases.

I have just finished painting up the majority of my Prefecture miniatures and abysmal as my photo-fu is I have posted these for all to enjoy, critique etc...


First up is of course, the Prefectures main guy and Samurai: 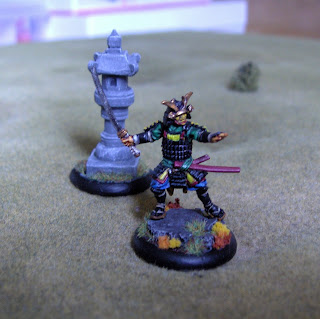 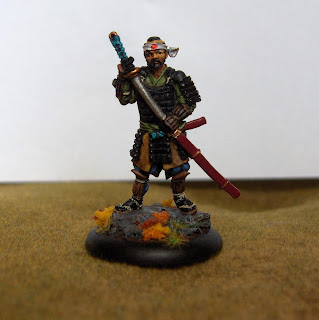 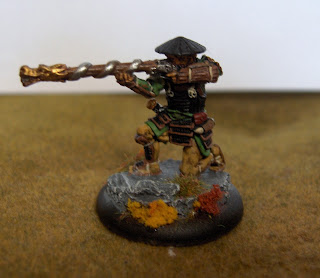 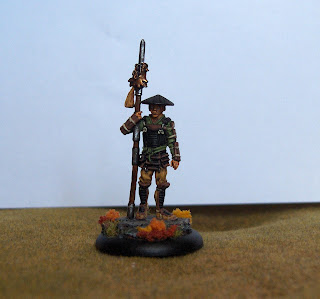 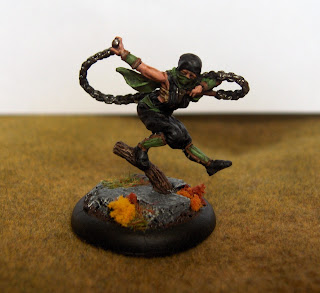 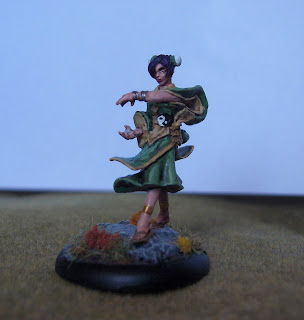 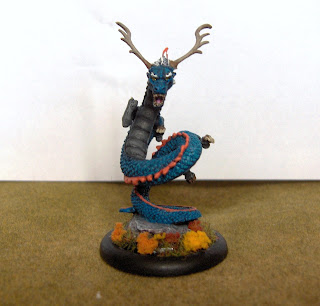 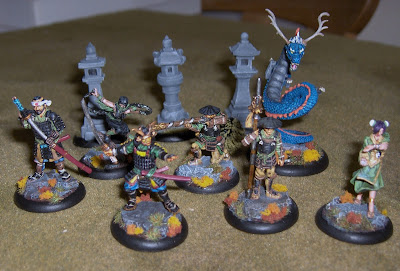 Just an Ashigaru, Jumo wrestler and the Sohei healer to finish now.

I chose the Green and Yellow colour scheme, so it was a bit varied from the GCT Studio colours and basically it was concepted by the descriptions of the uniforms/outfit worn by the Dragon Clan in the Legend of the 5 Rings novels.


Relics is set in a world that has suffered a cataclysm brought on by the Vaettir , who in their twisted ideology were trying to save it. The result of this was that all the races were changed completely and in the case of Humans, they were close to extinction. The unhinged Britanan King Jorge has created a rag-tag army of puppets infused with the souls of the dead to ressurect his empire.

The other races of Relica have been twisted, mutated and changed so much they now no longed resemble what they once were. Darkness and despair has descended, this is the world of Relics!


There is a smashing array of miniatures available from Tor Gaming, all of which have their own character and feel to them. They are scaled to 28mm and come with a mixture of 30mm, 40mm or 50mm bases depending on size. Unfortunately not all the miniatures have been released as yet.


The Rulebook comes in both print and PDF formats and weighs in at a grand 105 pages. The whole book is done in black and white, with sketches, diagrams and a good amount of fluff running through.

Set out in the same vein as so many similar sets of rules, it has all the basics and then additional rules in the form of Command, Magic and Morale.

The first four factions (Britanan, Vaettir, Orcnar and Nuem) have 13 different profiles listed at the end of the book along with a list of generic spells.

Basic rules/mechanics include NO PRE-MEASURING, and all characters/units follow a standard set of stats, which are: Move, Combat, Defence, Damage, Ranged and Morale. Each profile also includes various character traits and certain profiles also contain spells.

The sequence of a turn is simply I-go-you-go unit activation. Once a unit is activated, it carries out whatever it wishes to do, then play passes to the opponent.

Deployment is delt with by the force with the most units going first, then alternate placement of units is carried out until everything has been deployed. Certain units have special rules determining their placement during deployement and these are explained under their profiles.

Dice are then rolled each turn and the winner decides whether to go first or second.

During an activation a unit can either:

Dice - The dice mechanism for Relics uses a straight forward D6, and to gain a hit/success etc..is based upon the number of doubles you roll. So if you’re like me and have an inherent knack of rolling double 1’s, at least in this game it’s going to help you!
Moving - Is pretty standard affair with terrain affecting units.

Charging - Is handled by a simple random (d3) addition to your movement (if you fail to reach your target with this additional movement, you still have to move your basic move though). You also get a bonus increase in your combat stat. This bonus is removed if you are suffering from any movement penalty.

Attacking – This is the fun bit!  You roll a number of dice equal to your stat plus/minus any modifiers that are around (such as charging). The main one will be the opposition’s defence. For example if you have a combat stat of 3 and get a charge bonus this makes it 4, if your target has a defence stat of 1, this would take yours back down to 3.

With ranged combat the mechanism is exactly the same, however you will perhaps suffer the liklihood of additional modifiers for enemies in soft cover.

Ganging up - This rule allows up to two mates to take part in the attack by adding dice into the pool. This, while not letting you have loads of extra dice to attack, does mean you can get one or two extra hits through which is always a good thing.

Disengaging - If you decide to flee combat before you get tonked!  then you can attempt  to disengage which is a dice off against your opponent. A nice rule which means if you have some good range units about then you don’t have to worry about your own troops getting in the way OR you are just a coward.

Overkill - Another rule that is linked to the whole combat concept. This means that when you really go to town against those models within your combat range and wipe them out, the remnants of the unit is punished for such a weak showing.

Which translate as a negative modifier to Morale rolls equal to the number of extra wounds.

Morale - It’s a battle so morale unfortunately plays a part in it.

So what do we think of Relics then?


Well the basic rules are simple to follow and bring some interesting dynamics to the game, especially the doubles count as hits. A lot of basic units are going to have to use the charge and gang up rules to help them take down opponents. Also in this game you do not have to roll hordes of dice as per games such as Warhammer for example.


Other rules present in the book that you dont need straight away to play but do add to the game include Battlefield Command and Lingering Effects, as well as previously mentioned Magic. Users of Magic (In the Relics world know as Maaj Casters) have to numbers associated with it - these are their Knowledge and Power values. Knowledge equates to the points that a Maaj unit can spend purchasing additonal spells from a Generic list. If the value is 0, no spells can be purchased and they have to survive with the spells listed on their profiles only.

Power is the number of power dice the unit gets for a turn (combined) so as casualties mount their power is reduced.


Tor Gaming have gone for a very different approach to force list creation. You are in no way restricted to what units you have, however units of the same type get more expensive the more you have. I will give an example.

The first two units (say Britanan Troopers) are purchased for their normal profile cost. Simple enough. Any more Trooper units then gain an addition percentage cost which increases as the number of units increase.

An unusual process of working out totals but it works surprisingly well, and helps to match balanced forces.


Relics is a very nicely put together system, the rules are unique enough to stand out whilst at the same time seeming familiar to alot of gamers. The models are unique and sublime, Evil Fairies and Puppet Soldiers are to my knowledge not found anywhere else.

My only critism would be that when reading the PDF on a tablet or computer screen, some of the fonts can be difficult to make out and that the miniature count is so low. The Nuem should be released shortly and a few more models for each faction are in the process of being released also.

I highly recommend this game its fast, furious and fun!