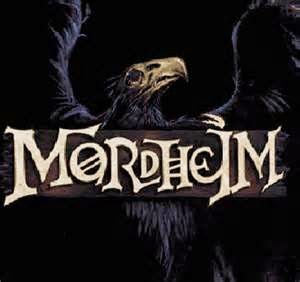 Von Strackenhoff leant over the table straining his eyes in the darkness at the map in front of him. His only illumination came from a single candle stub spluttering away. He slowly looked up, the tiredness and stress in his eyes evident as he gazed at his two Champions as they entered the dimly lit room.

"Gentlemen" said Strackenhoff, "the time has come. With this map that was handed over as you know now, by my recently deceased scout I have deciphered its code and found the location of a fairly intact part of Mordheim containing a completely built Coaching House. For the first expedition of our Bloodsoaked Charter Company I think this will be an ideal place to start. Its near the city walls and we will not have to venture to far into the accursed city."

"Partly true" replied Strackenhoff "I have heard of a Warband of Mountain Orcs that have a lair in the region. If needs be we will surely deal with them if it comes to any encounter"

With these words the Captains left to prepare the Company for their excursion into the degenerate city of Mordheim.

Strackenhoff looked again at the map and especially the glyphs depicting Orc lairs and grimaced. They would certainly end up in conflict with the Greenskins, just when would be the question. Would his fledgling Company stand up to their first battle! 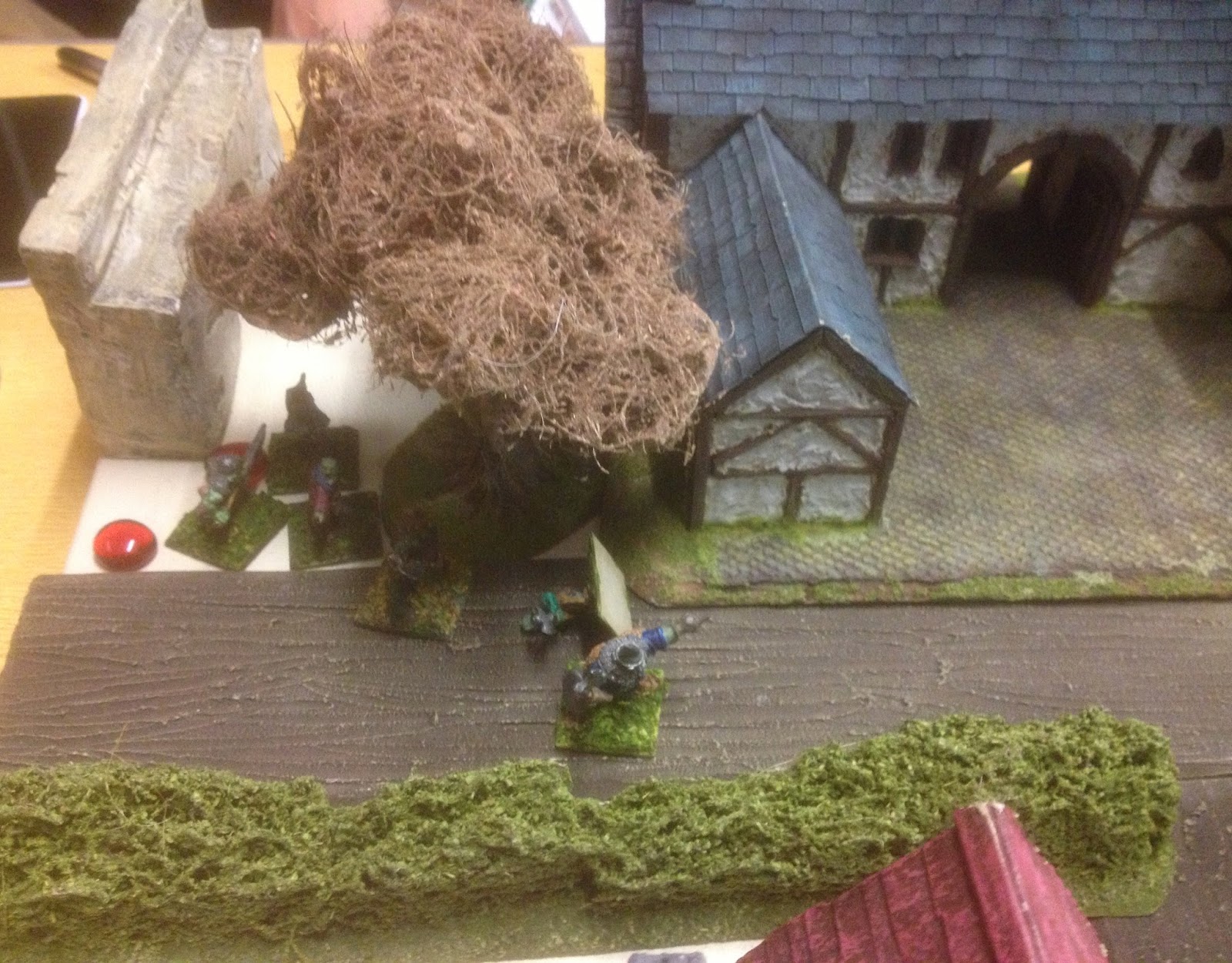 This was my first game in our clubs sporadic social Mordheim campaign and I was going up against the Campaign organiser who was using Orcs. Now I have not played Mordheim for donkeys years and have absolutely no experience in the game or with any of the extra odds and sods that have been added via the old Town Crier magazine and Specialist Games updates etc...

The game scenario was Close Encounter and I set up the scenery (I made a huge mistake with the hedges as these are Bocage usually used for WW2 games and extreamly huge! no line of sight for my Reikland Marksmen then argh) 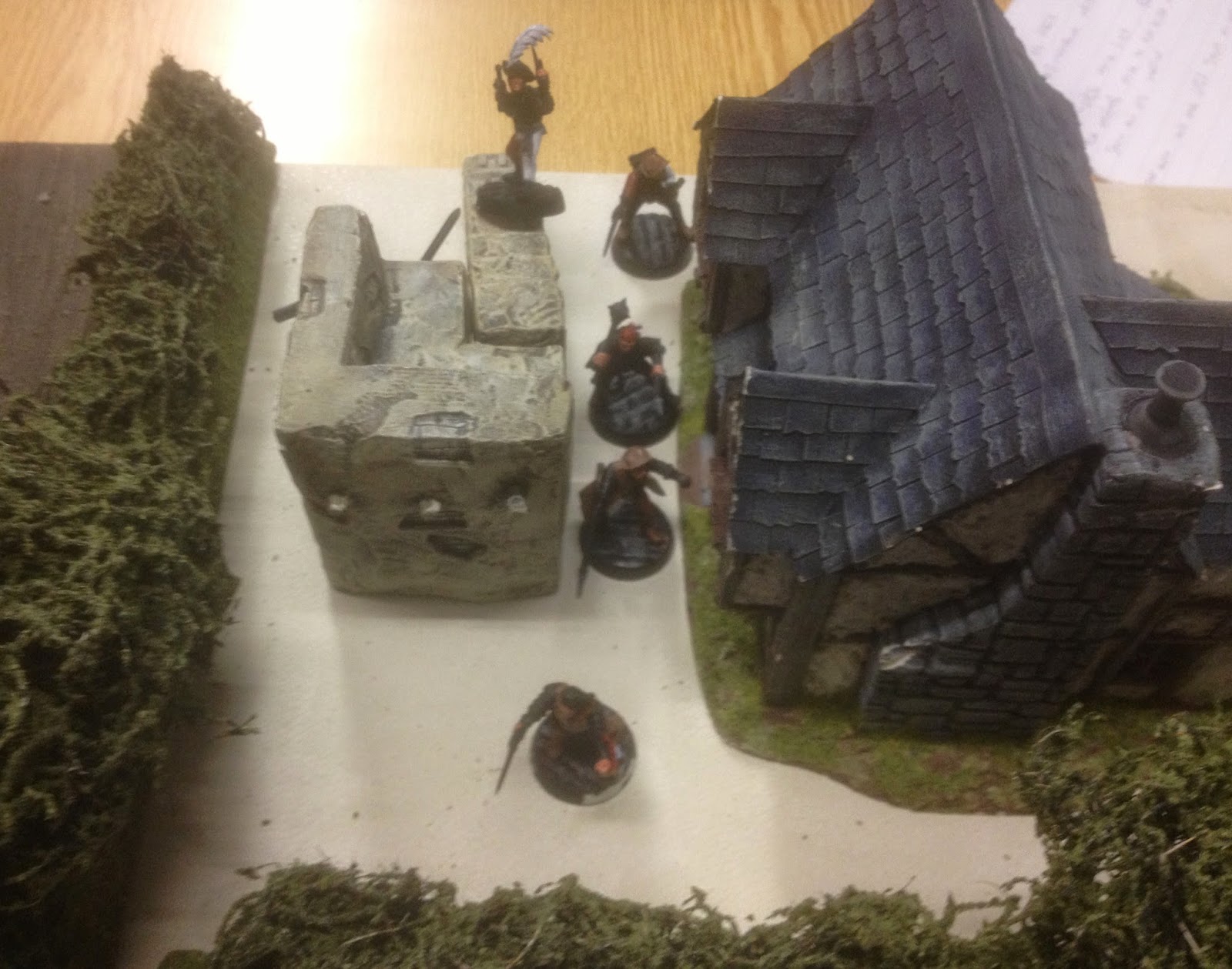 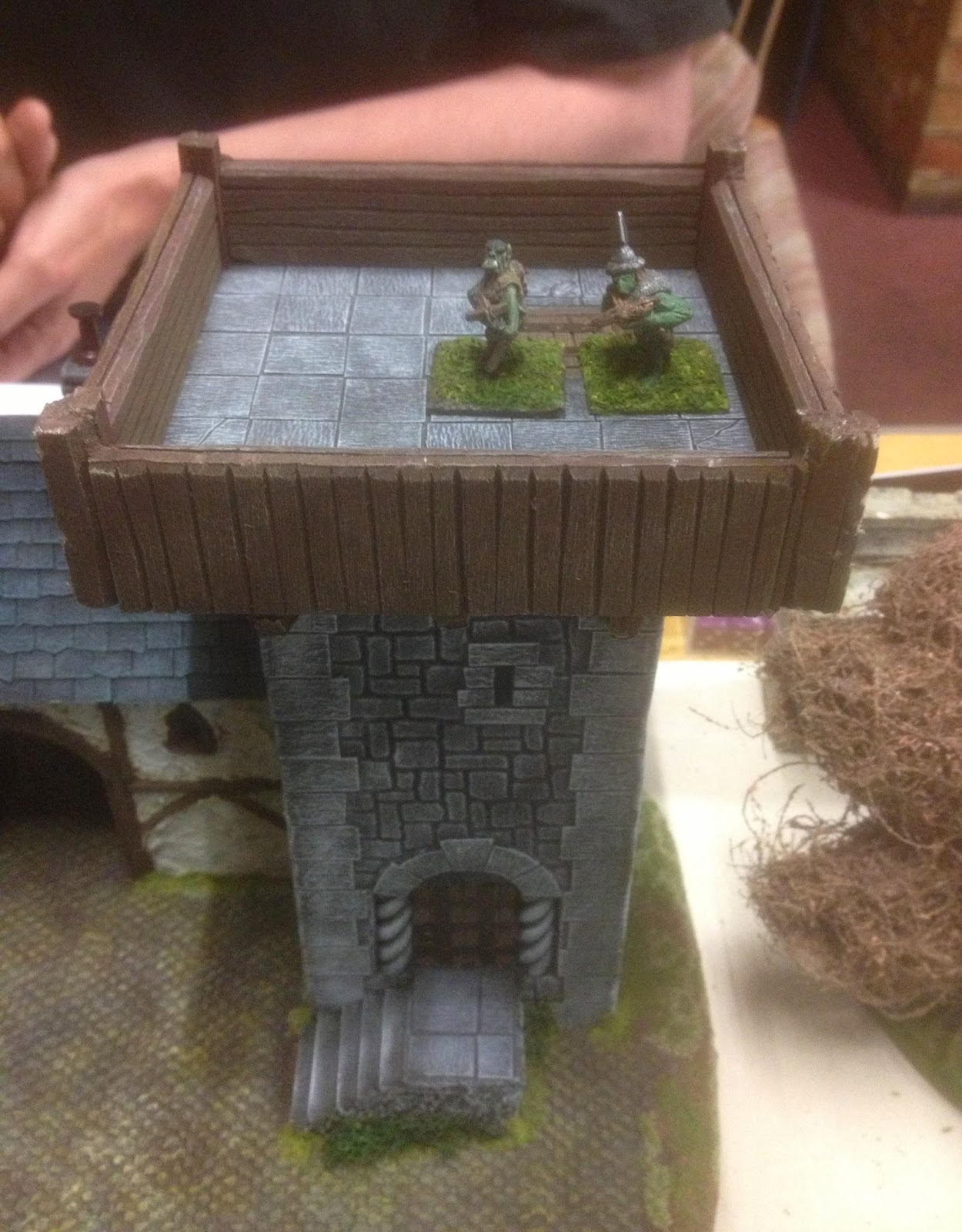 My Reiklanders started with 3 pieces of Wyrdstone and the Orcs had 2, depending on how many heroes were lost during the game would depend on the amount of Wyrdstone you had at the end of the game.

The Orcs won the initiative and move first from their corner depoyment area with 2 crossbow wielding Orcs making for the large stone tower. My Empire souls moved forward with my Marksmen making for the windows of the building in their deployment area. A few shafts loosed saw an Orc Warrior stunned. 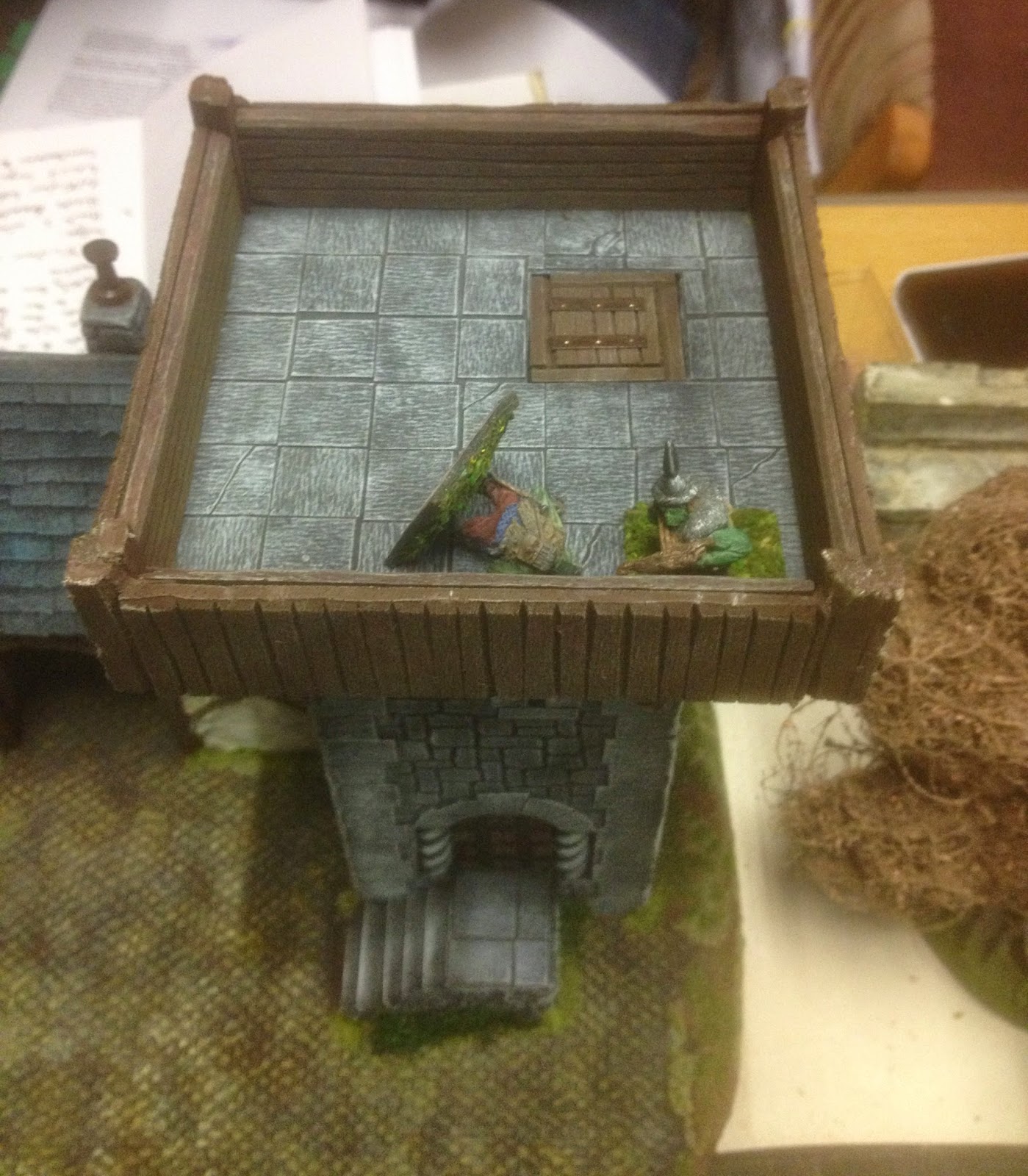 The Orcs advance but suddenly break out in bouts of Animosity with 2 Orcy boys scrapping but not hurting each other. The Crossbow Orcs take the tower and look for a good vantage point. The Reiklanders sneak along the hedgelines whilst their Archers watch and wait for a nice Greenskin target. 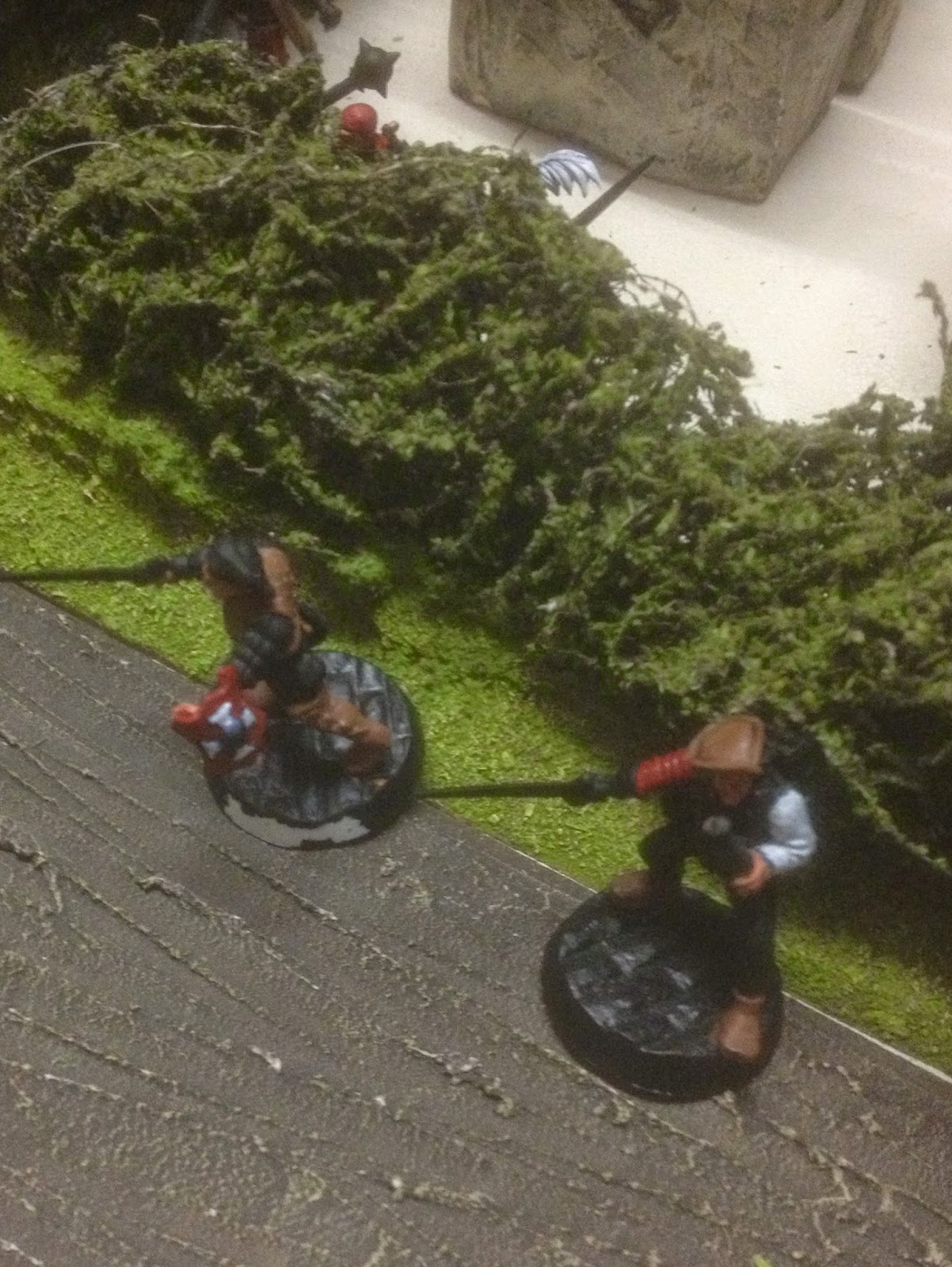 The Orc warband still suffering Animosity see's a grumpy Orc boy standing a bawling at his mates. The Reiklanders push into a postition to defend against the encroaching Greenskins whilst the Archers manage to stun a Crossbow Orc in a flurry of arrows.

The Orcs and now feeling all pink and fluffy after sorting out their differences and surge forward. A couple of Reikland Swordsmen leap the hedge ready to take on the Orcs whilst the archers let loose again at the crossbow Orcs but completely miss.

The Orc Chieftan rages at his Warband and a brave warrior roars back at his boss. Strackenhoffs boys climb the hedges and take the left hand side red roofed building. The archers hit the Orcs on the tower again but fail to wound the tough barstards! 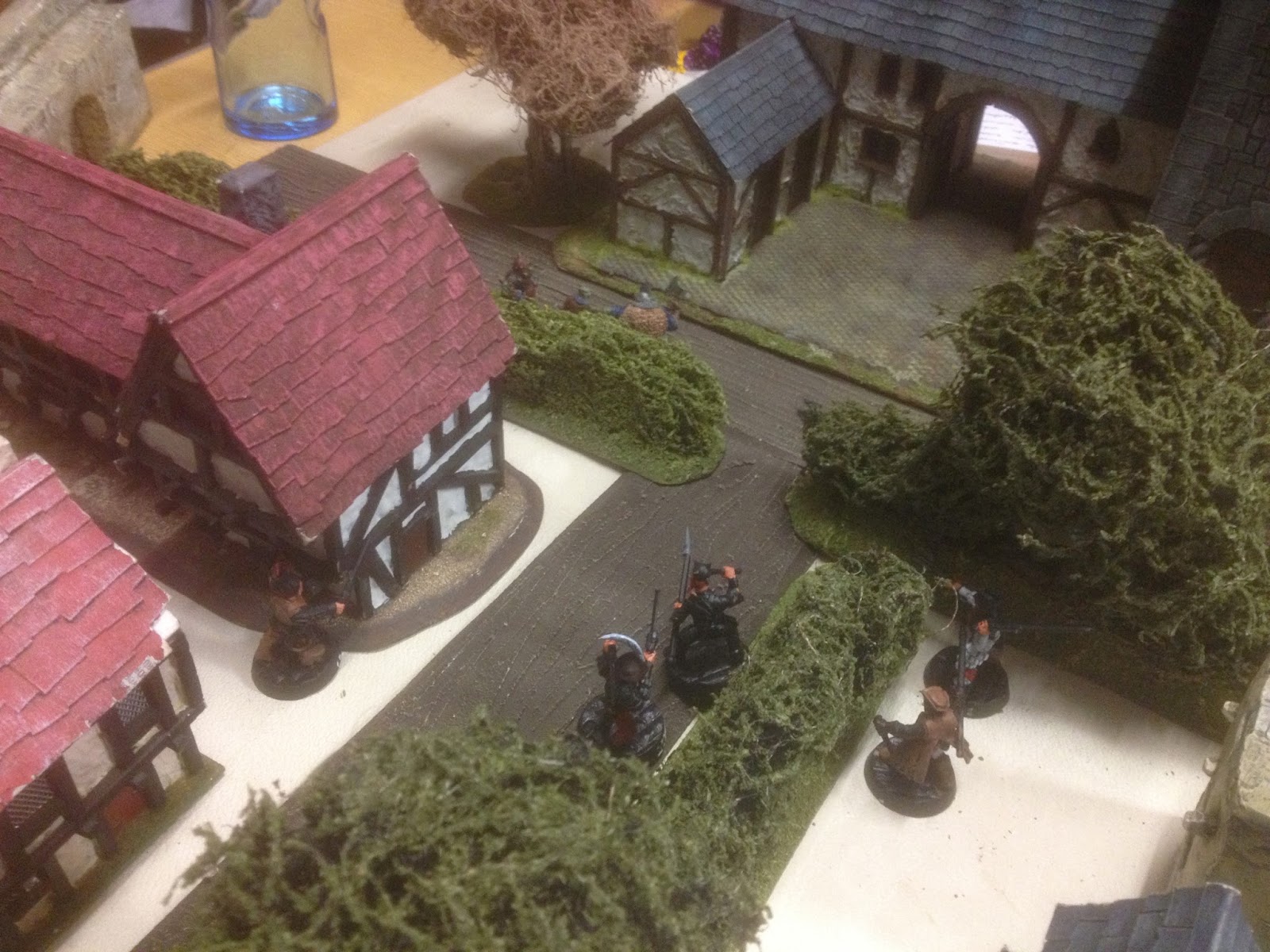 With the Orc Chieftan still raging at his laggard warband the Orcs on the tower fire their crossbows at a Swordsman who deftly dodges around the corner of a building. the archers fire back but miss whilst the Empire Youngbloods set themselves up ready for an Orc charge. A Reikland Champion takes a chance with a pistol shot and manages to stun an Big Orc warrior. 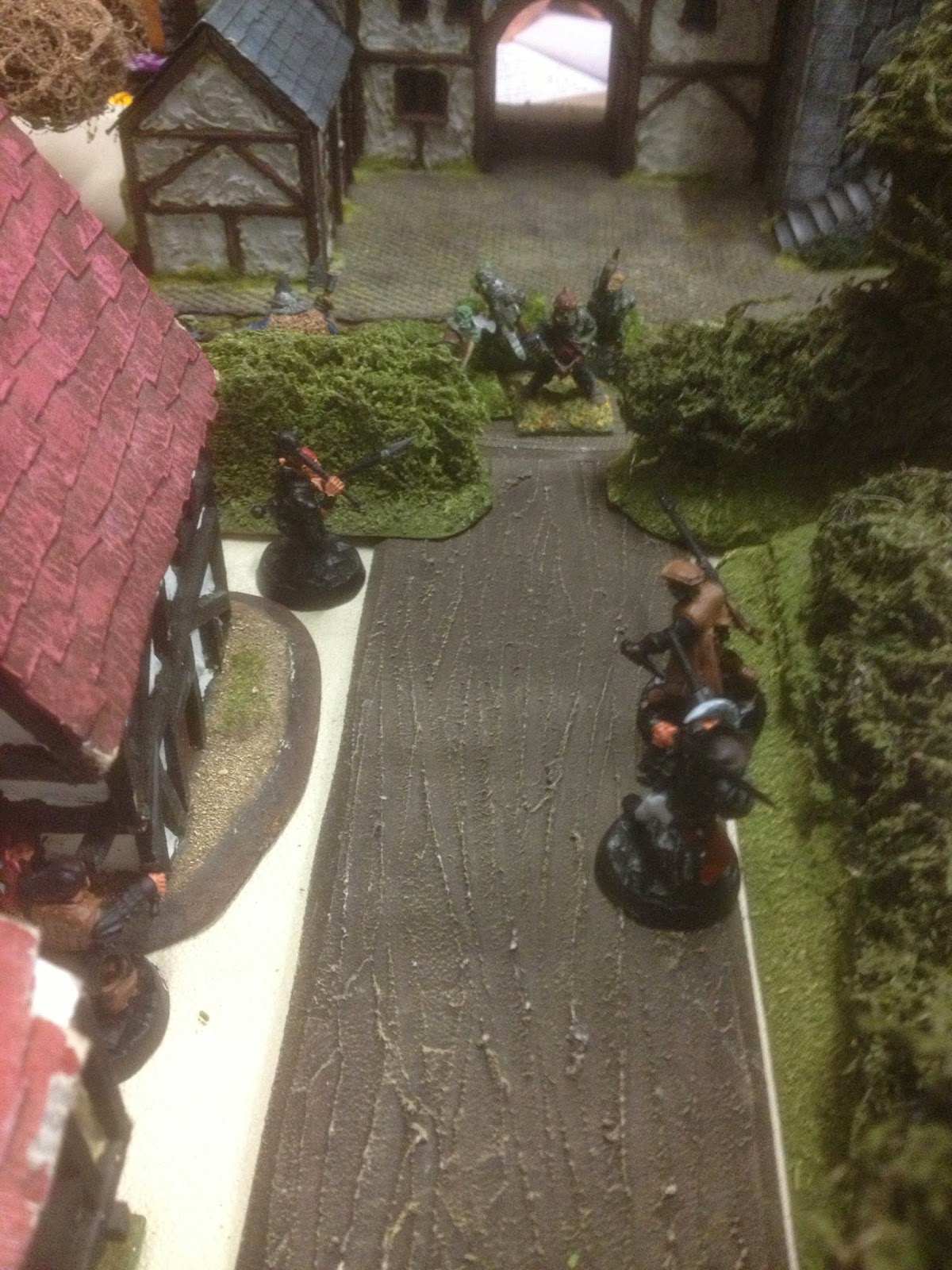 The Orcs get themselves together and charge the Reiklanders. The crossbows on the tower manage to knock over a Youngblood with a hail of bolts. The charging Orcs pile into a Champion and a Youngblood. The Champion taken by surprise by two nasty Orcs is Taken Out of Action and the Youngblood is stunned. 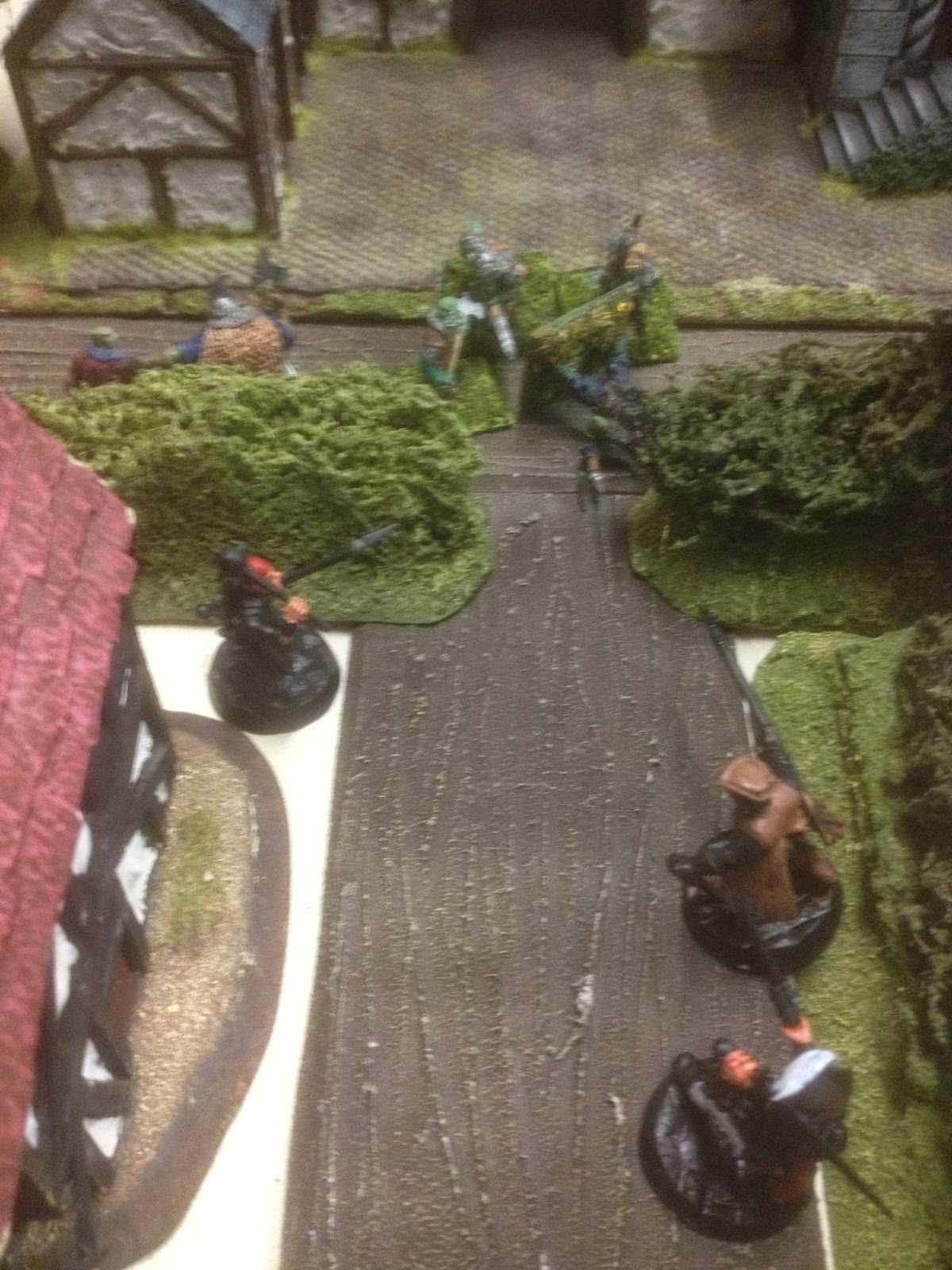 The Empire lads charge in revenge and manage to stun the attacking Orcs whilst Strackenhoff fires his pistol into the back of another Orc and stuns him. The archers taken leave of their aim completly miss the Orcs on the tower. 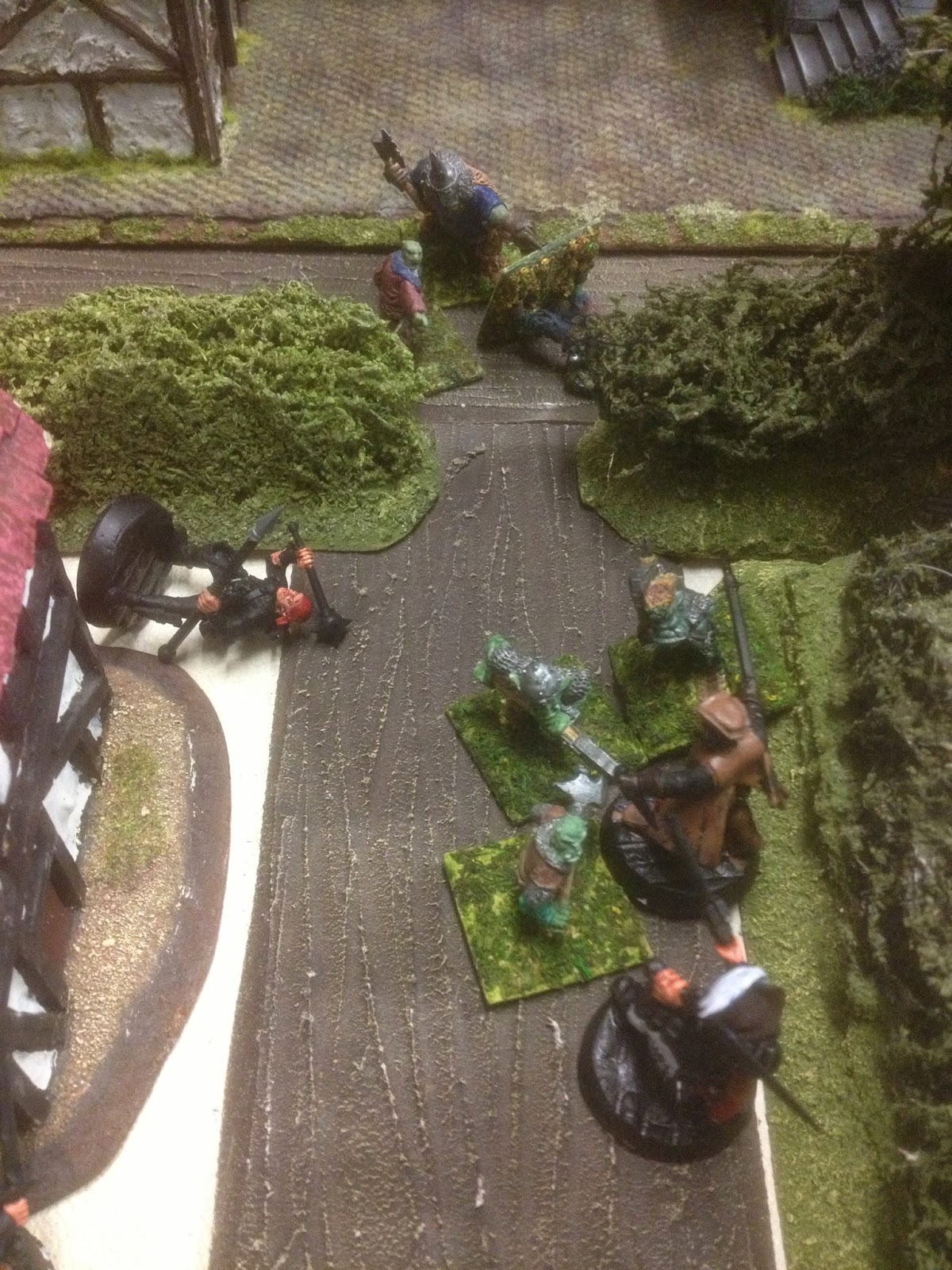 With the Orc Shaman finally in a position to let loose with some foul magic it all goes wrong and he decideds to have a go at his Chieftan instead. The two crossbow Orcs fall out and one takes a swipe at the other but does no damage, the other crossbow Orc shoots a Swordsman and stuns him whislt the Orc Cheiftan knocks over a Youngblood.

Strackenhoff backpeddeling with his guys getting crumped all around him decides enoughs enough and calls his Company to break off and take whatever Wyrdstone they have. 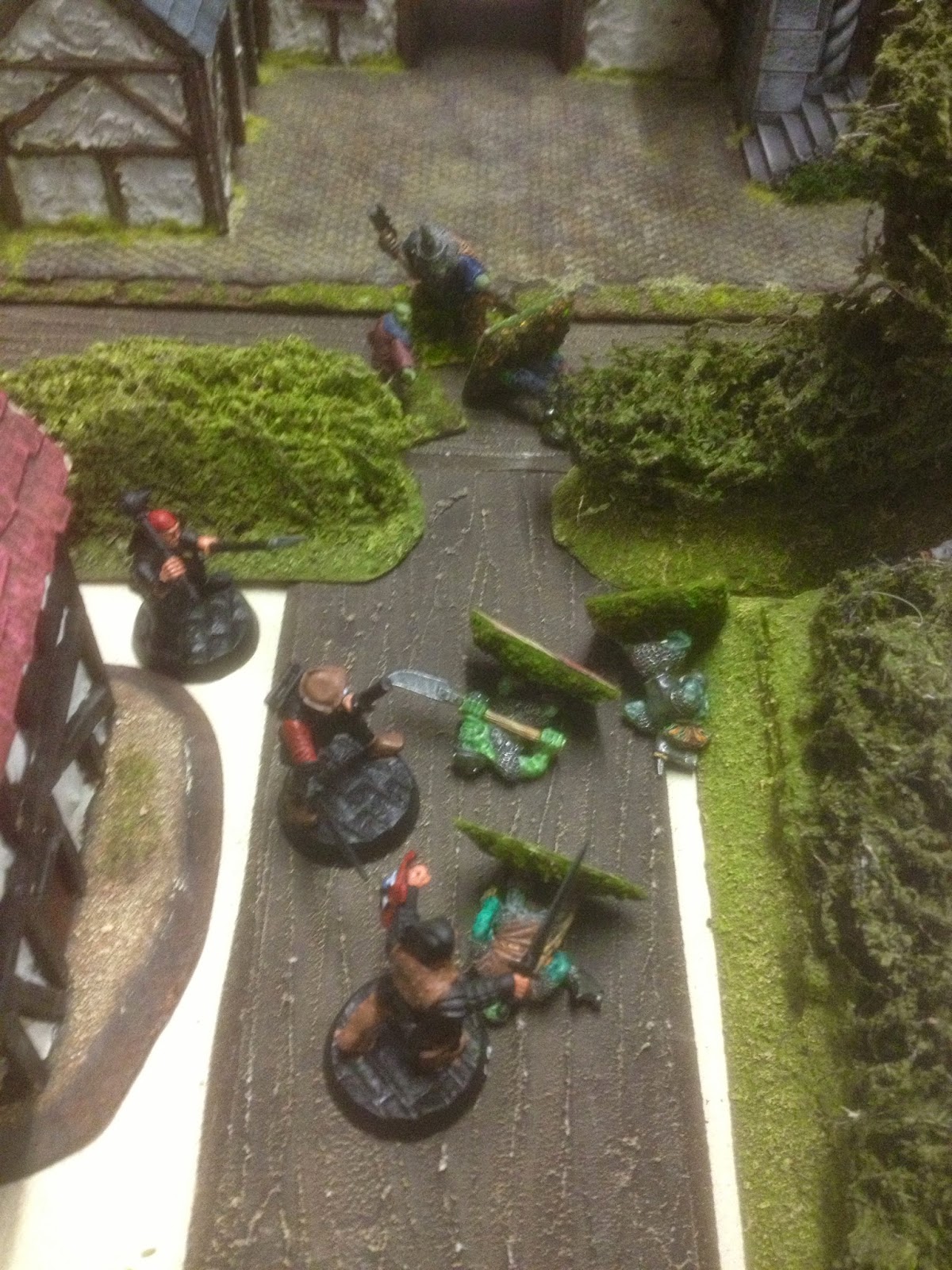 Basically my dice to hit and wound all game were atrocious and although the Orcs spent most of their turns in Animosity they were getting the upper hand. After losing a Champion and a Youngblood out of action I took a morale roll and rolled the highest dice id had all game so promptly failed the roll and my lot legged it.

Fortunately my Champion fully recovered on the injury roll and my Youngblood only had a smashed leg, hes still in the game, just cant run (most games are on a 2'x2' board so not much running anyway)

I came away with 1 piece of wyrdtone and Kit with the Orcs managed to walk away with 4.

more updates in the continuing Mordheim story next month. 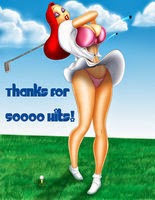 Thank you to everyone who visits this blog. I have in just over 2 years, through my sporadic and inane postings managed to rack up over 50,000 Hits.

Again thanks and have some boobs as Im celebrating!! 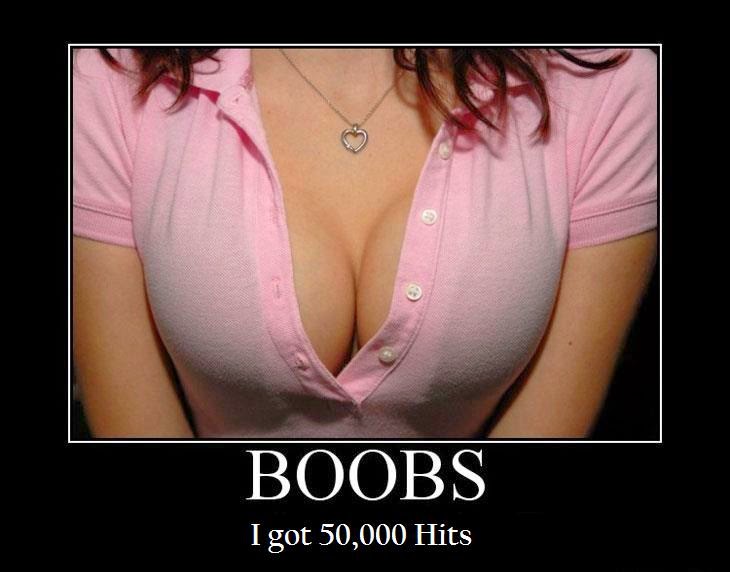 Ok so after my lengthy SALUTE Aftermath post I suddenly realised that I had committed a huge sin and ommitted the obligatory SWAG picture and description!!!

So I humbly beg forgiveness for my indiscretion and hereby submit forthwith the corresponding article.

I still think I spent more than Ray !!! 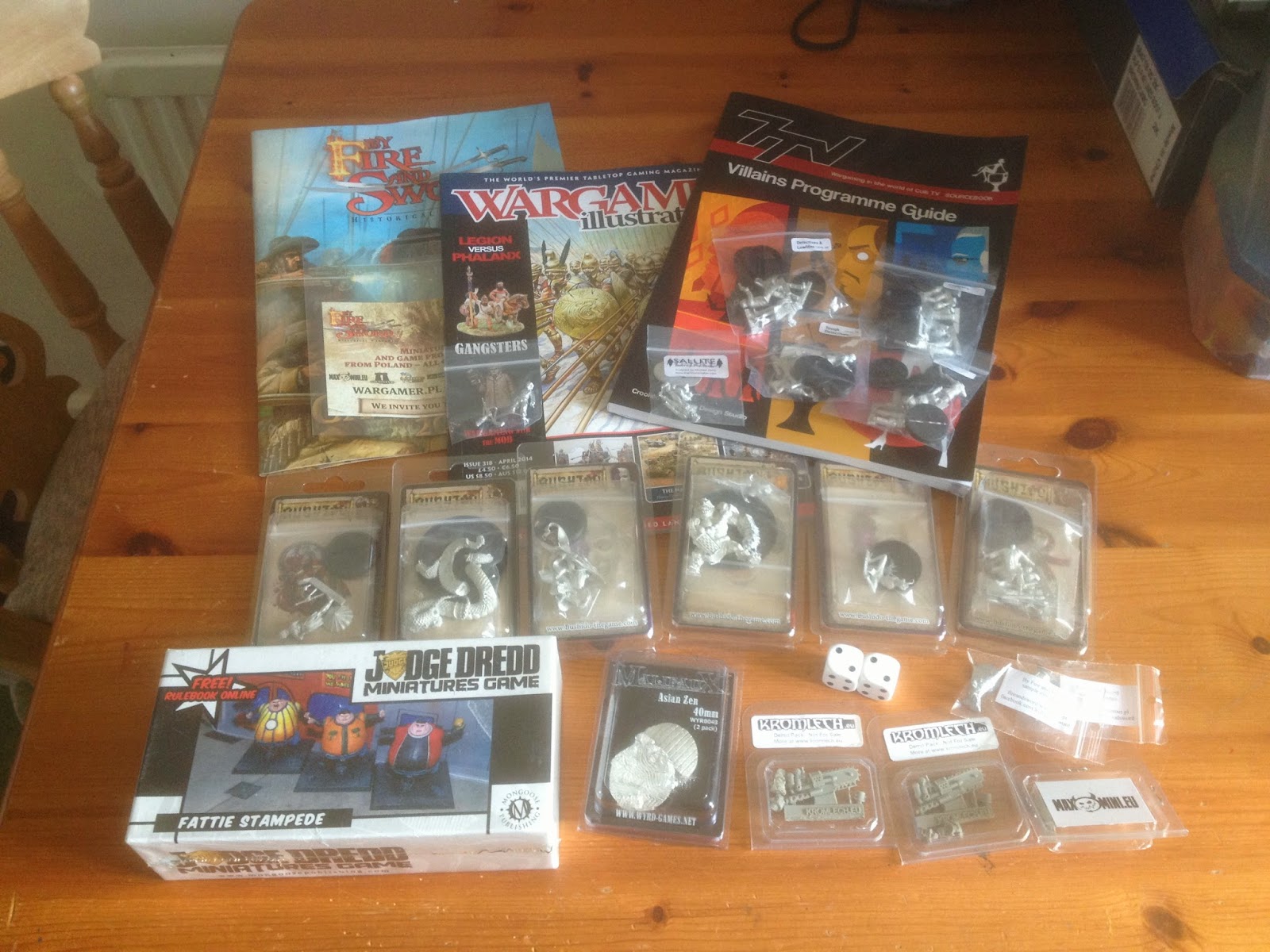 If anyone would like the Kromlech, Maxi-Mini or Fire and Sword 15mm minis just comment and let me know as I have no use for them.

April each year is special to me as it includes a number of notable events. First of all its my Birthday month and the anniversary of my Blog. It also includes my Mum and Dads Wedding Anniversary, this long suffering couple have managed to put up with each other for over 40 odd years!!! 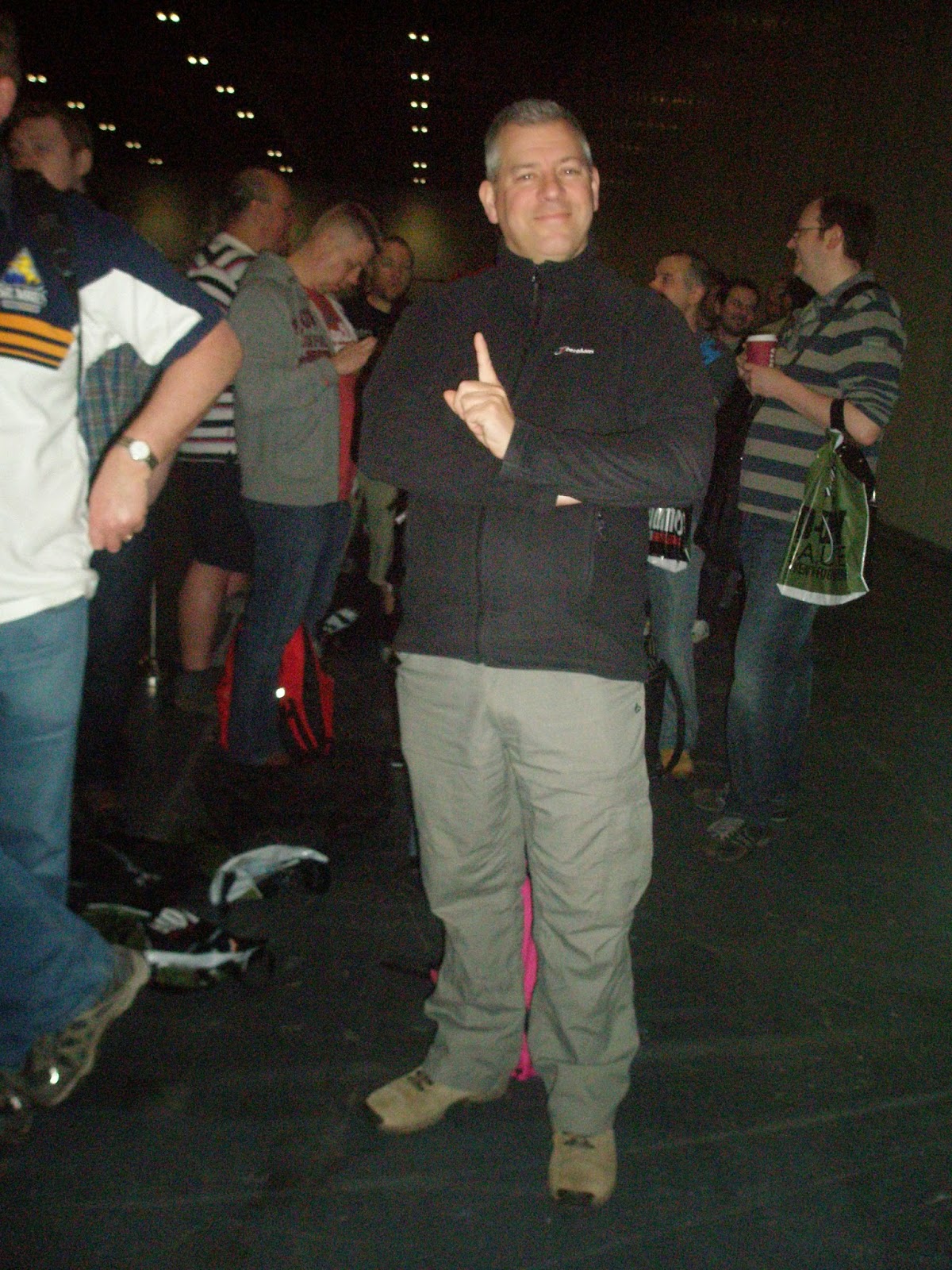 Most of all April is SALUTE MONTH!!! This year saw my annual pilgrimmage to the church of wargaing at the usual time. Getting up around 6am and groggily navigating my way through the pathetic roadworks on the M25 down to the Excel. I always arrive about 8am and get completely scalped the same as everyone else with the extortionate parking charges and then entered the concourse.

The dutiful yellow clad SELWGers directed me to a massive empty hall! well bugger me wheres the queue? I was it, I was first in line!!! obvioulsy not having a bring and buy this year has deterred the massess from arriving so early that they need to scrable like startled gazelles to get their huge boxes of hardly ever used antique tat on the bring and buy (this should be taken in humour as I have done it myself numerous times over the past 15-20 years)

So a nice long wait then (as even being first in the queue with an advance ticket didnt get me throught the door until 10am!!!)

The wait was made easier with a very nice natter to Anthony from the Peterborough Wargames Club just up the road from me and I can see a goodwill visit on the cards. Also Paul, the designer of Valhalla (a Viking Skirmish game) plonked down and board and dice and asked if anyone fancied a go. Anthony and I dutifully agreed and a fun filled half hour was diced away with me coming away with my first win of Salute - Hoorah!.

The Show this year for me seemed a bit different, I cant quite put my finger on it, maybe its was the quality of some of the games (I found them a bit lacking) although I must say all the demo games I had were cracking and the enthusiasm of the people running them cant be faulted. I also for some unkown insane reason was having trouble spending!!! I had a shopping list but unfortunately some of the traders I expected to be there, wern't and some had ludicriously priced items. example: 1 trader had a B-Wing for the X-Wing Miniatures game priced up at £30! I know these are out of stock at the moment and Fantasy Flight are reissuing them but this in my opinion was disgusting|!

﻿ Anyway near then end of the day with nothing new or exciting jumping out at me to claim my cash I reverted back to my default games for new shinys (although I have now got home and ordered a ton of stuff and the Rulebook for Donnybrook - blame Ray, the swine!)

So onto the multitude of pics including the now obligatory Bloggers meet at 1pm. Great to catch up with Ray, Fran, Tamsin, Postie, Clint and Mr Lee and now also some new great friends, Clint even gave out some very yummy fudge.

Another enjoyable exhausting Salute and here's to 2015. 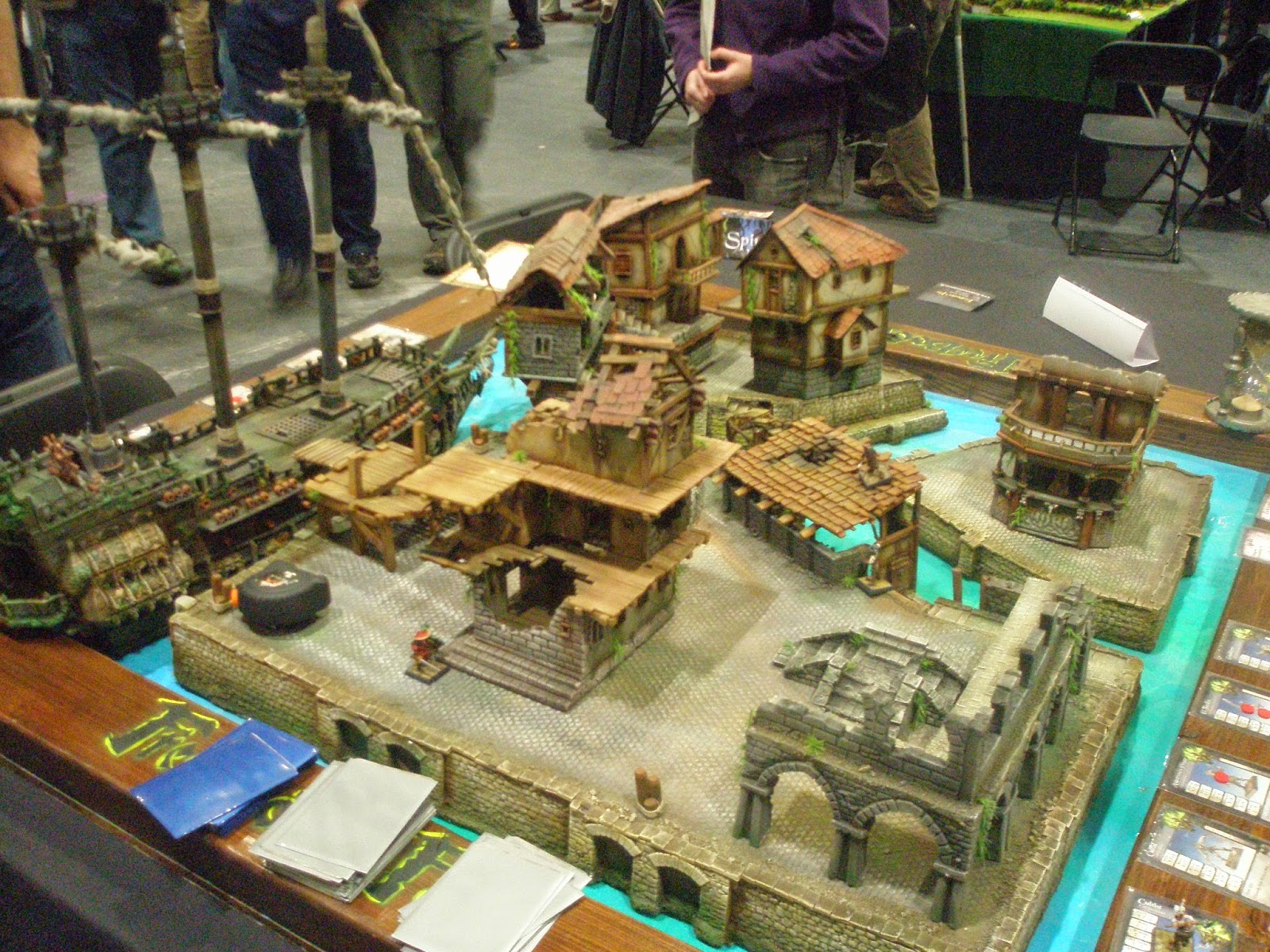 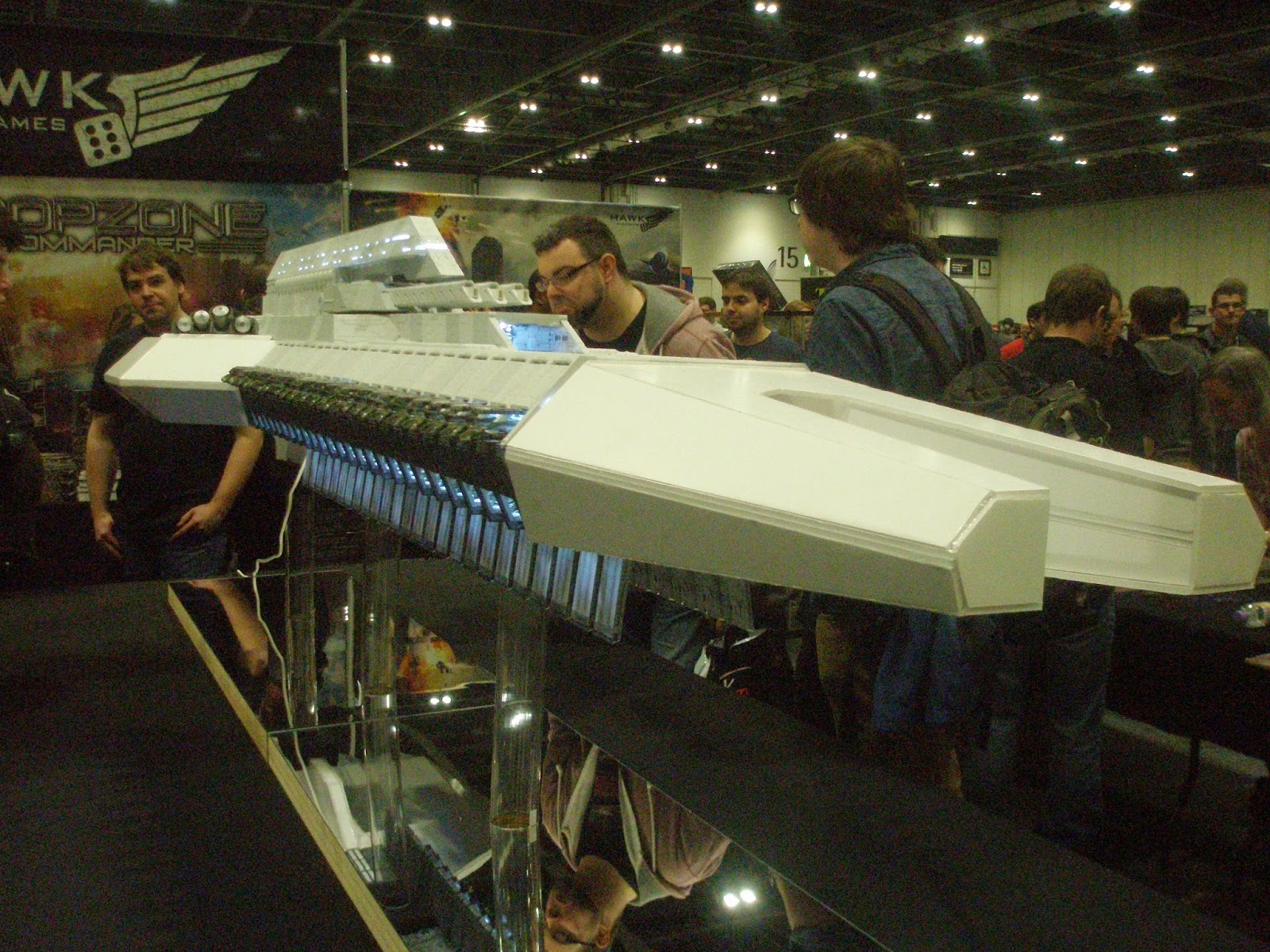 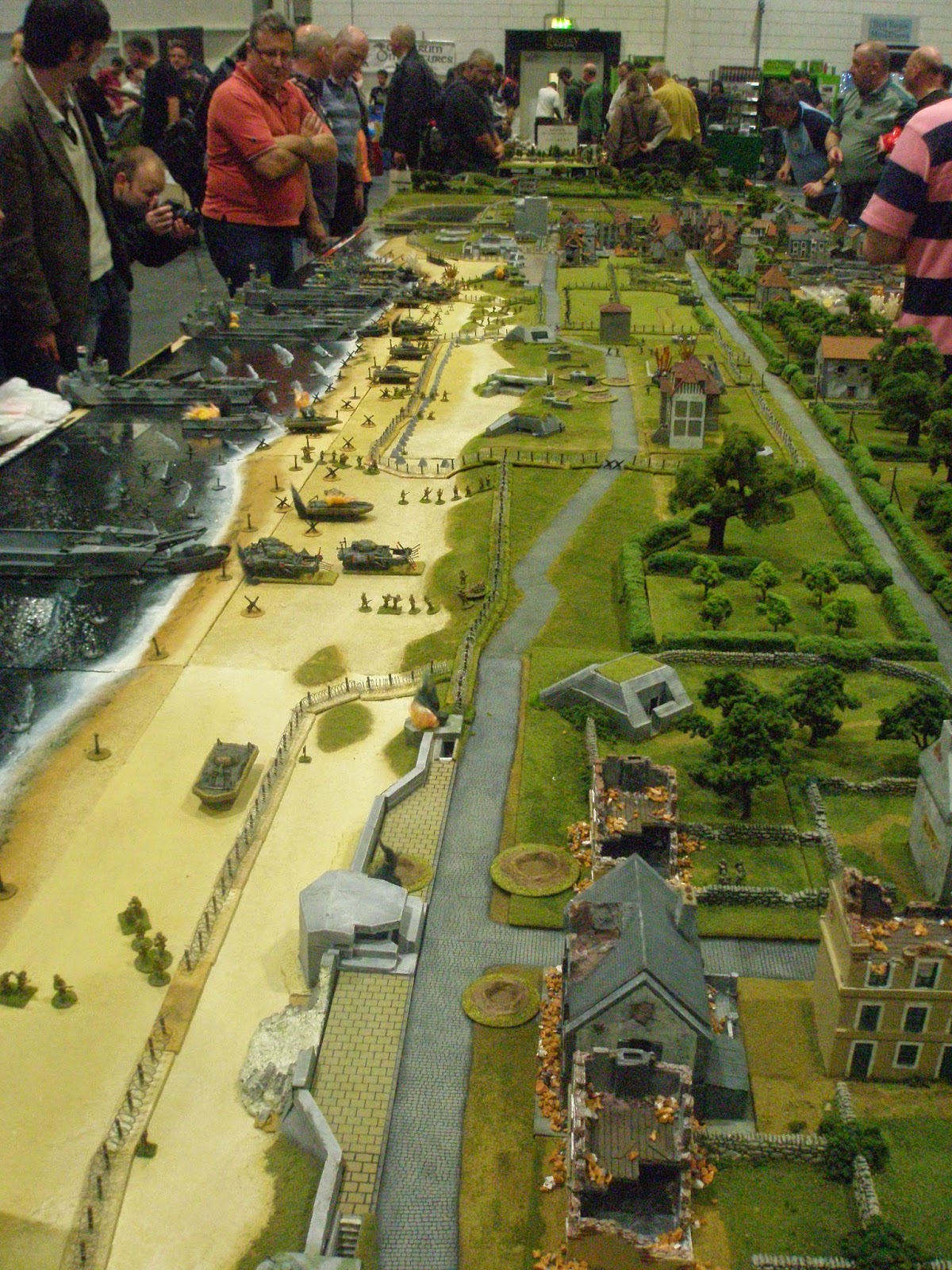 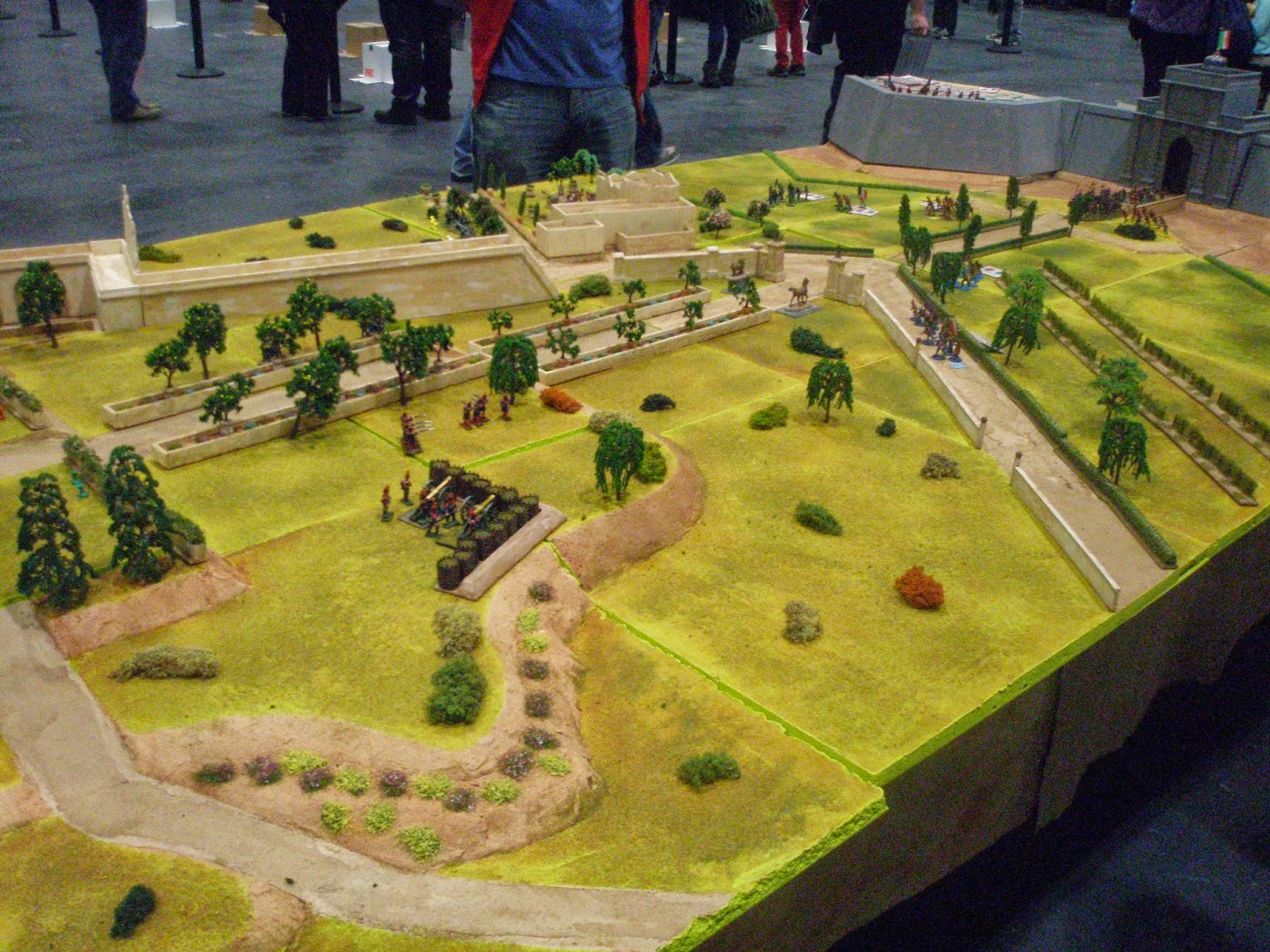 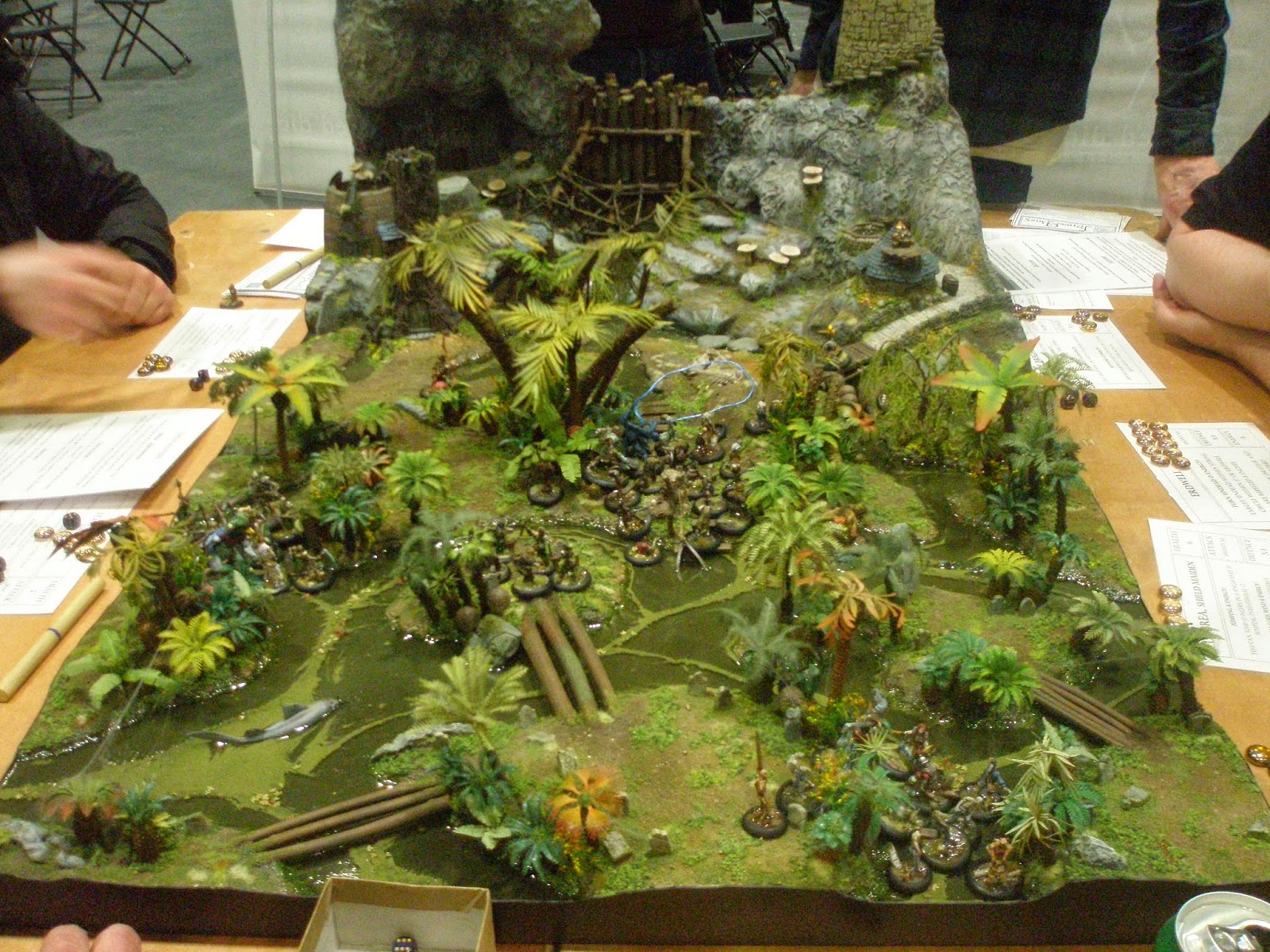 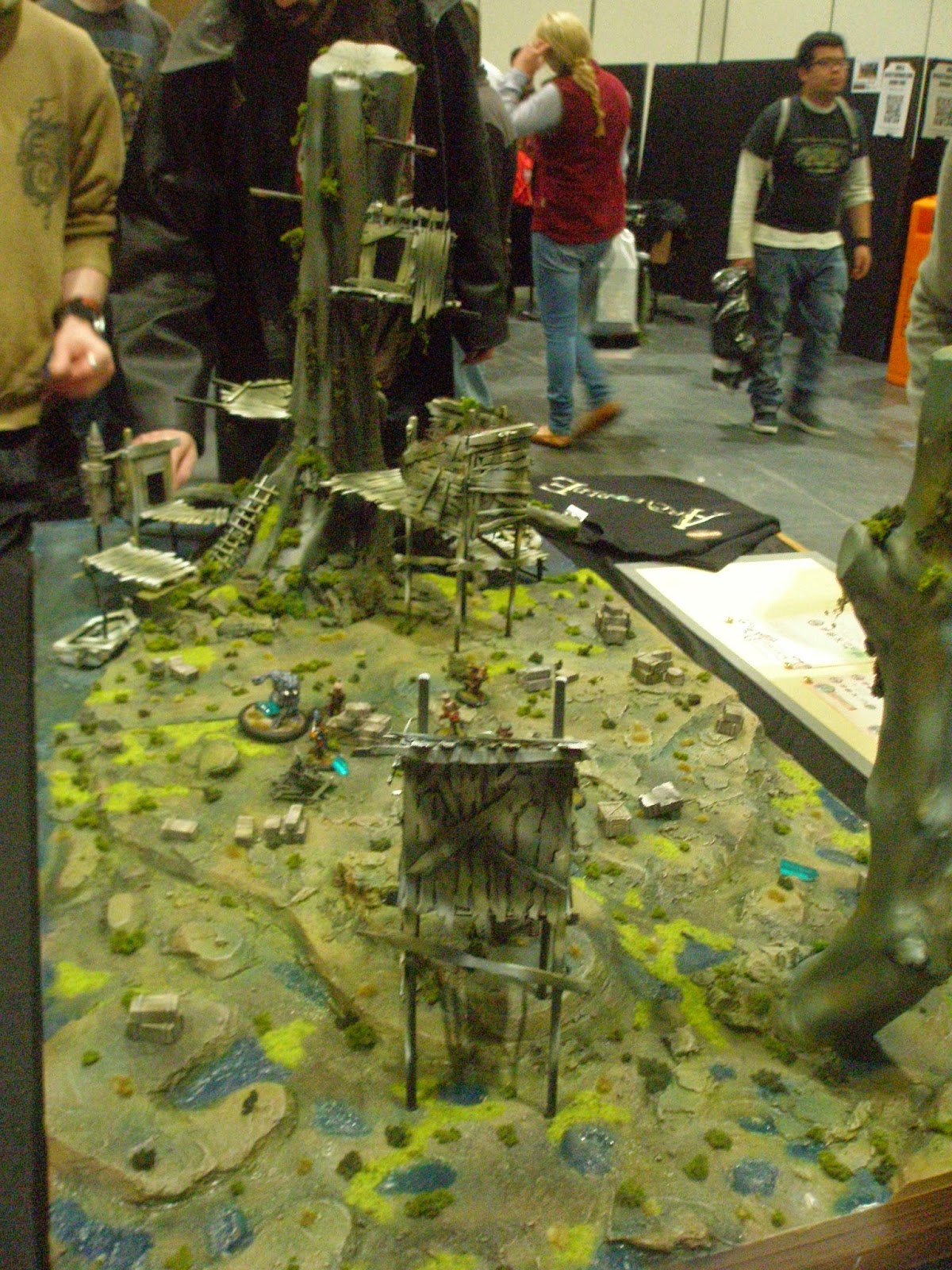 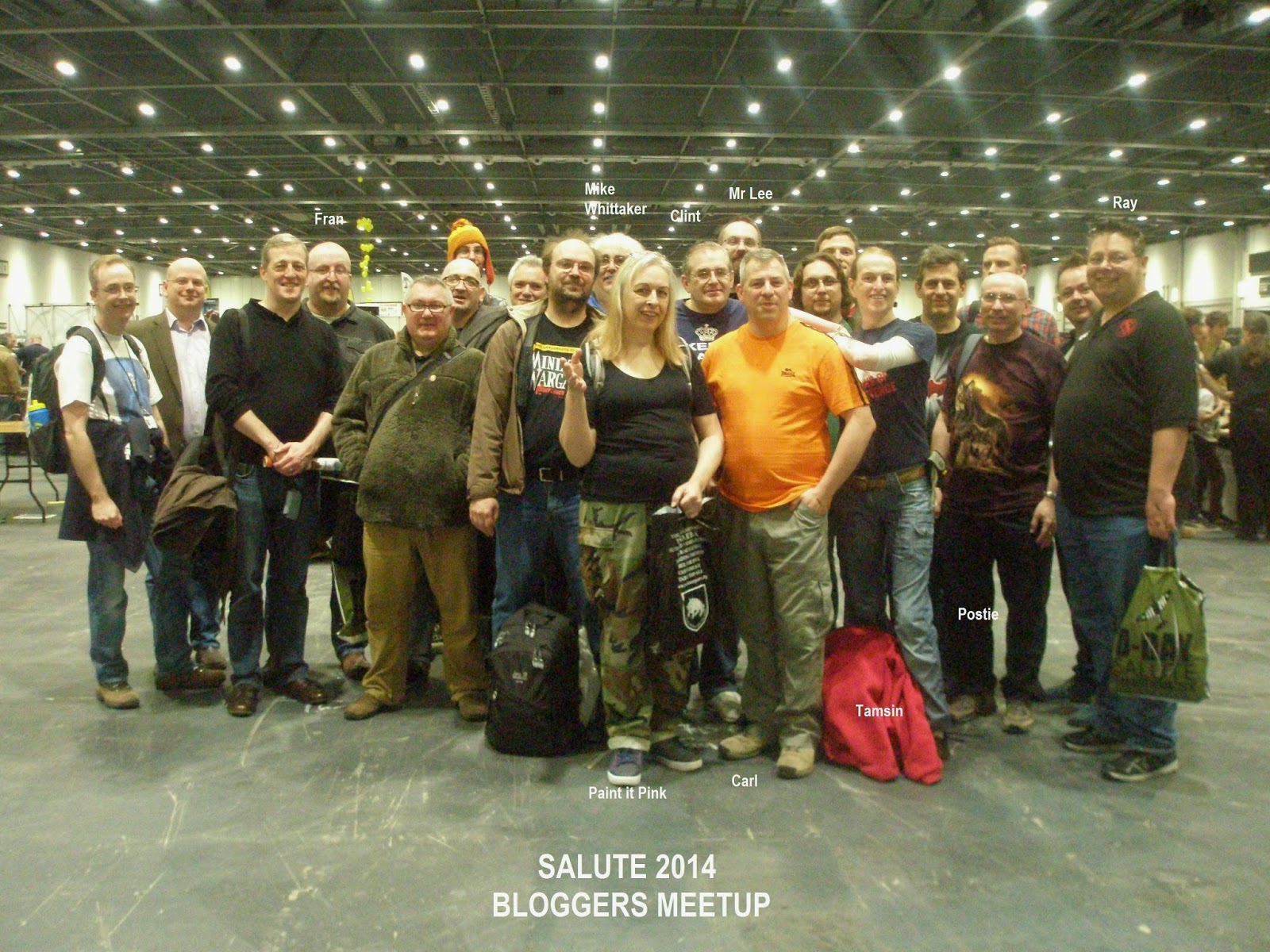