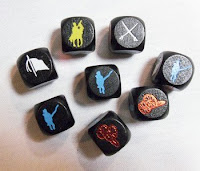 Sunday just gone was my 18th Wedding Anniversary and even though the Wife and I dont go in for all that romantic celebrationary stuff I thought I would treat myself to a little me present.

SWMBO didnt go empty handed, flowers and new stuff for the horse was purchased so no guilt for splurging out.

I have been after Command & Colours Napoleonics for ages but for some reason just never got round to getting it. That has now been rectified and at the end of the month I will be ordered the Prussian Army box expansion. 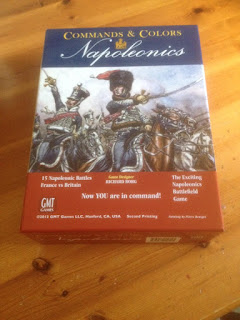 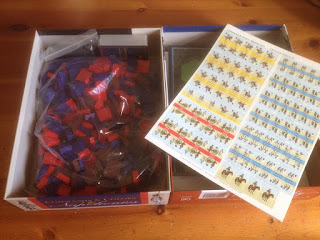 Now to the buisness of sticking all the decals on the hundreds of little wooden blocks!
Posted by Carl at 16:15 4 comments:

The final post in my Waterloo Bicentenary series and I have left my favourite till last. Ever since I started reading about the Napoleonic Wars and especially the 100 days campaign culminating in the Battle of Waterloo, Hougoumont has always fascinated me. The place in itself became a whole seperate battle on Wellingtons right flank, sucking in more and more French troops and the combat lasted all day. 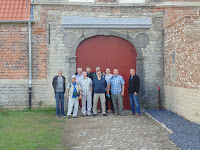 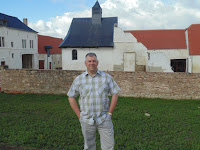 The day's battle began on 18 June 1815 at about 11 a.m. with a French attack on Hougoumont from the south-west, led by Napoleon's brother Jerome. The French gained control of much of the chateau's park, but the Allies retained possession of the farmhouse and courtyard surrounds. Jerome continued his attempts to take the farmhouse throughout the day, making four or five assaults, most of which were repulsed by the defenders, who fired through loopholes, windows, and doorways. One assault at about 12.30 p.m. breached the north gate, which had been left open to allow allied troop and supply movements.

Sous-Lieutenant Legro, of the French 1st Light Infantry, broke through the wooden doors with an axe, allowing French soldiers to flood the courtyard. The 1st Foot Guards commanding officer, Lieutenant-Colonel James MacDonnell, led his men through the melee in the courtyard to the gates, in an attempt to shut them against the pressing French. This was done with the help of three officers (Captain Wyndham, Ensign Hervey, and Ensign Gooch), Corporal Graham, and a few other soldiers including Graham's brother Joseph. James Graham was the one to slot the bar in place. Flagstones, carts, and debris were then piled against the gates to hold them secure. The Frenchmen trapped within the courtyard were all killed, apart from a young drummer-boy.

Wellington monitored the action at Hougoumont until about 1 p.m., by which time he was content enough with the position's security to concentrate his own attention on the allied centre. With the chateau secure, the 3,500 British and German troops in the vicinity were able to defend the strongpoint against an estimated 14,500 French soldiers. About 8,000 French soldiers died attacking Hougoumont over the day.

At 7 p.m. the defenders at Hougoumont were still resisting, despite the burning buildings and their own dwindling ammunition. Within a couple of hours, the action in the rest of the field had resulted in a victory for the Allies: the French were in retreat. Afterwards, Wellington declared that "the success of the battle turned upon closing the gates at Hougoumont." It seems likely that if the gates had not been shut so quickly the men holding the perimeter at Hougoumont would have been killed.

Wellington's respect for those who served in Hougoumont was well known. After the battle he wrote: "You may depend upon it, no troops could have held Hougoumont but the British, and only the best of them."

Our group had two visits to this auspicious monument, the first was as part of the visit to the Allied camps, mentioned in the first post, this visit only saw us being able to view the exterior of the Chatau and its grounds, which included seeing the only 3 remaining original trees from the wood infornt of the South Gate. These old trees are pockmarked by musket balls and scarred from the battle. 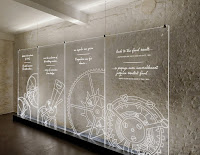 The second visit on the Sunday after the battle reenactment, we gained admittance inside the grounds and access to the museum, visiting the Breguet room and having a view down into the old cellers underneath the barns. As we entered the couryard, Nassau reenactment troops were carrying out a parade, with the Officer handing out medals for the troops actions in the previous battle of Quatra Bras. This was a very fitting tablau, listening to the officer call out the troops and the Fifer and Hornist playing. Nassau troops were stationed in Hougoumont duing the battle and were just as integral to its defence as the Foot Guards.

Hougoumont has been the project of some serious restoration and I had donated a few times over the years. You can visit their website and read about it here.

I was absolutely thrilled to be able to stand in and around the grounds of Hougoumont and was in awe of the troops (on both sides) bravery and courage during this fiercest of fights.

I hope readers of these posts and visitors to my Blog have enjoyed travelling with me as I recount my experiences of this wonderful trip.