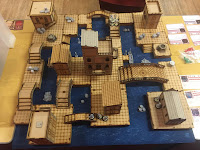 I played my first proper game of Carnevale against my friend Mark last Thursday and ran my Patricians vs Marks Guild in a Headhunter Scenario.

Building our Carnevale Gangs with 75 Ducats each.  The Scenario  – Headhunter had simple rules – basically you would score 3VP for kiling a leader, 2VP for a Hero and 1VP for killing a henchman. The game would last 5 turns.

"The Guild are attempting a raid on a Nobles Casa, Palazzo Barbarigo Minotto, when the Noble and his Masacarata return from a nights debauchery. Suddenly seeing themselves possibly trapped the Guild must fight to the death to escape, hopefully taking down a few of the hated Patrician Psychopaths" 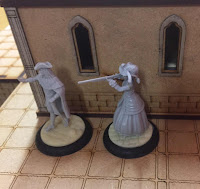 The Patricians advance with De Chartres and Ms Wake flanking from the east to take position on the lion bridge. To the north, Giovanni Barbarigo and his butler climb to the top of a small house, preparing to jump over to his casa. Giovanni fails first dex roll but finally gets into position with the rest of his actions. (failed dex rolls will feature a lot!!!)

The Barnabotti, Zilia Dandolo skips across the narrow bridge looking at flanking on the west side of plaza. Meanwhile the Guild all move up across the bridge to the north, moving quickly south. Making all their dex rolls, even the blood witch nimbly jumps forward. Not much action takes place as both sides try to get an advantage of position. 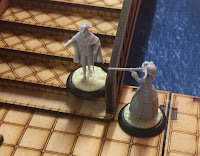 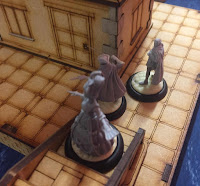 The Patricians claim the initiative and Meredith shoots the female citizen at long range with her rifle, quickly reloading and slyly smiling as she she's the citizen stagger backwards, bleeding. 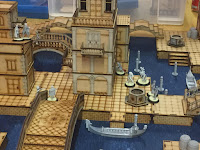 Preparing the way for his master, Barozzi prepares to jump the gap over to a balcony on the casa. Failing the jump he hits the plaza floor heavily and screams in pain. Baba Yaga casts blood-lust on the Butcher as the Barnabotti chain jumps up to the roof of a house west of the casa. 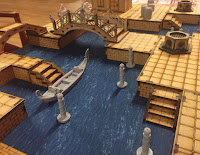 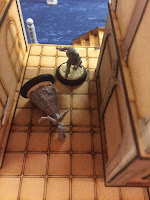 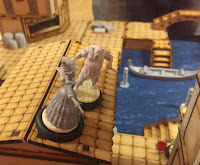 Seeing the Barnabotti up above, the Butcher under command from the Blood Witch attacks and manages to hurl her from the roof. Clearly unable to use her billowing silk shirts as a parachute Zilia falls 5 inches to the plaza floor landing in a bleeding heap. Giovanni, seeing his favourite get cast from the rooftops leaps towards his casa ready to take the fight to the nearest enemy.

Again the Patricians leader fails his dex and he falls but manages to tuck and roll hitting the ground and is able to stave of any damage. Recovering quickly the Noble snaps off a pistol shot at the Butcher, but at the maximum range the small pistol ball can't penetrate the Butchers thick leather apron.

Seeing the Barnabotti crumpled on the ground in the alley near him the Capodecina darts forward and quickly dispatches her before skipping back into the shadows. 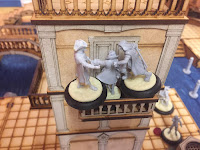 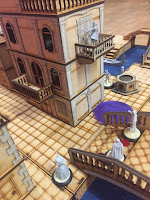 Gaining the initiative the Guild surge forward. Baba casts Abyssal Mist close to the Lions bridge blocking the Ms Wake's line of sight and then casts blood-lust on the Capo before using her unnatural abilities to drain blood from a nearby male citizen to heal herself after the strain of casting her blood magic.

Taking command from de Chartres, Meredith shoots, reloads and fires again at the Butcher. Again the thick apron of the Butcher helps in protecting him but he still staggers back bleeding as a round takes him high in the shoulder. 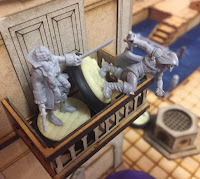 Both citizens move to guard the Blood Witch whilst Giovanni climbs up and around the outside of his casa using the overhanging balconies. The Capo sensing an opportunity rushes to meet him and the Patrician leader is impaled on the Capos blade making him bleed heavily.

However the Capo hadn’t noticed the trap – Giovanni had lured the Capo away from his support and now he was vulnerable. Charles de Chartres clambers up to the balcony and with deft swordplay seriously injures the Capo. 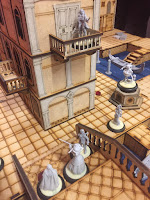 With the Patricians surge they gain the initiative and Giovanni in a frenzy of savage blows cuts down the Capo mercilessly. During this deadly exchange the Butcher had circled around the west of the casa and again under command from Baba Yaga manages to catch up to Meredith Wake and wounds her significantly. 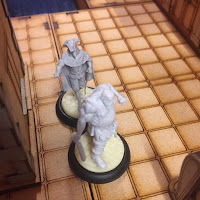 Baba seeing both nobles recovering from the brutal fight against the Capo casts Kraken's Breath. Catching the pair of nobles with her devastating spell it causes hideous damage.

In a rage from his wounds de Chartres leaps down onto the Butcher hoping to take him out before he succumbs to the agonising pain of the Kraken's Breaths affects. 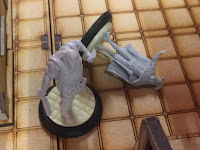 Still with the initiative Giovanni tries to climb down his house away from the cackling Blood Witch, however with the debilitating wounds taken from Kraken's Breath he cant hold his grip against the crumbling walls of his once opulent abode.

Flailing like mad for any type of handhold, which he cant get he crashes to the bloodstained flagstones below and doesn’t move again.

Regaining his composure after such a viscous attack from above, the Butcher wields his huge cleaver and cuts down the French dandy de Chartres, leaving a mass of bloodstained fine silks and carved flesh on the plaza. 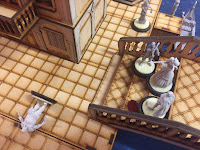 Recovering her wits after seeing her patron cut down Meredith aims and shoots the Butcher finally dropping the huge brute. Occupied with reloading her rifle Ms Wake doesn’t see a ragged citizen sneak up behind and never has time to register the club cracking her skull before losing consciousness. 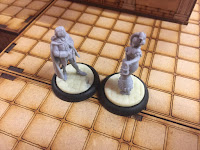 Seeing his masters company falling the Butler Niccolo decides discretion is the better part of valour and retreats away from the remaining Guild members. A citizen suddenly dashes from the alleys and lunges at him but the wild attack only glances him and the Butler manages to get away from his opponent.

"With the coming dawn, the Watch can be heard approaching and both sides withdraw. Baba Yaga surveyed the carnage around her. Her pawn was dead, but no matter – plenty more pieces left to play. The Patrician was no longer a problem in her plans, lying broken and and smouldering on the plaza floor, barely alive. however his Butler was attempting to drag the wretched noble into the house.

The Spy, sent to investigate the rumours of a powerful Witch aiding the Guild was dead and now unable to report back to her foreign masters…whoever they were. One thing was certain though, after tonight's raid a clear message had been sent – don’t cross the Blood Witch."

The Guild killed: Foreign Noble 2vps
Spy 2vps
Barnabotti 1vp
Patrician Noble was taken out by falling and was ruled as not giving the guild vps.