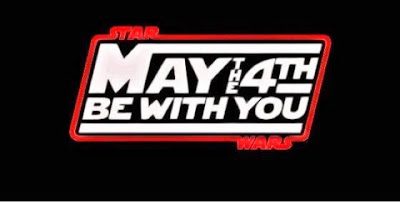 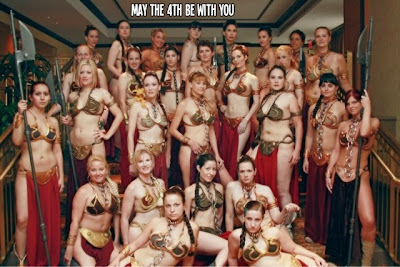 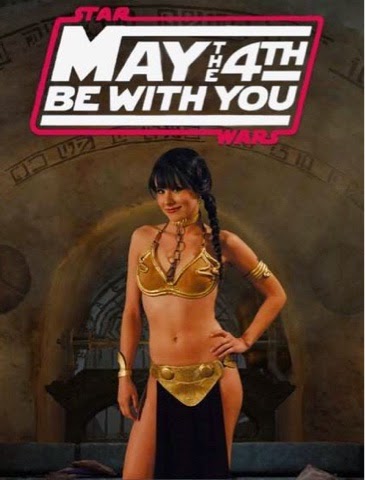 Across the Dead Earth - Incident at Oakington

Adam had heard through Trader Guild rumours that a State owned facility, located on the old Oakington airstrip near the edge of the Cam-Bridge crater, had been left abandoned and was a virtual loot bin to be delved into if you had the stones.

Now Adam wasn’t that naive and this had kept him alive longer than most. If the area was littered with loot as much as the rumours said, why hadn’t the Guild sent in their own heavily armed protection gangs to ransack the place!
So, sod’s law meant that the State still had some units in the area but it would still be worth having a look!

As Adam and his Family entered the edges of the disused airstrip, they could see darting forms manoeuvring through some dilapidated huts. So thought Adam, the State are still operating in this area, not going to be a simple scavenge hunt, now they’ll have to work for their loot. 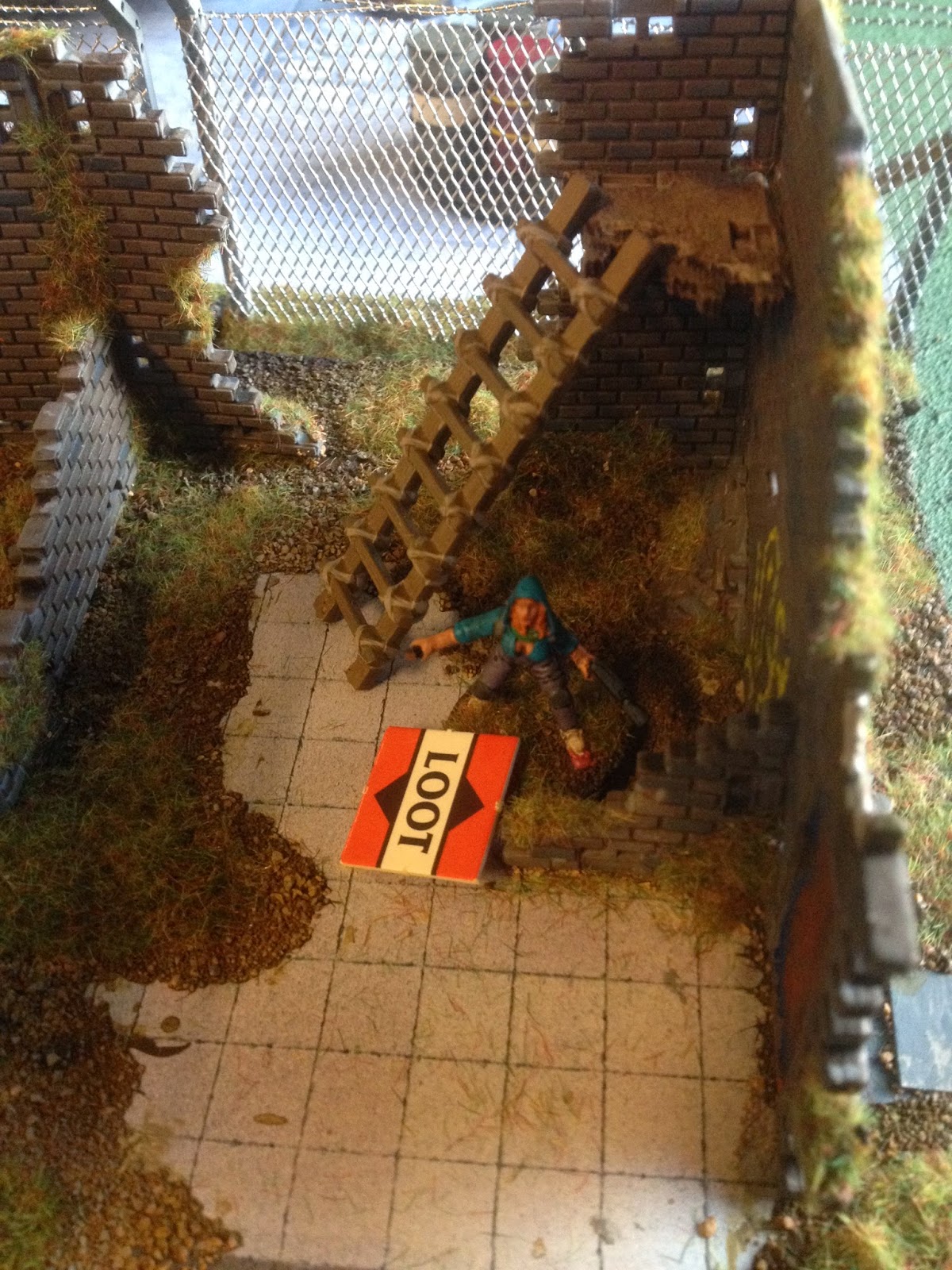 The State were sharper than the Family and gained initiative quickly. Betty moved forward towards some nearby loot but an Information Error meant it was further away than she thought, so she hides behind some sandbags. Skylar finds some loot in the ruins and withdraws whilst Baz searches around the downed helo and finds some loot. 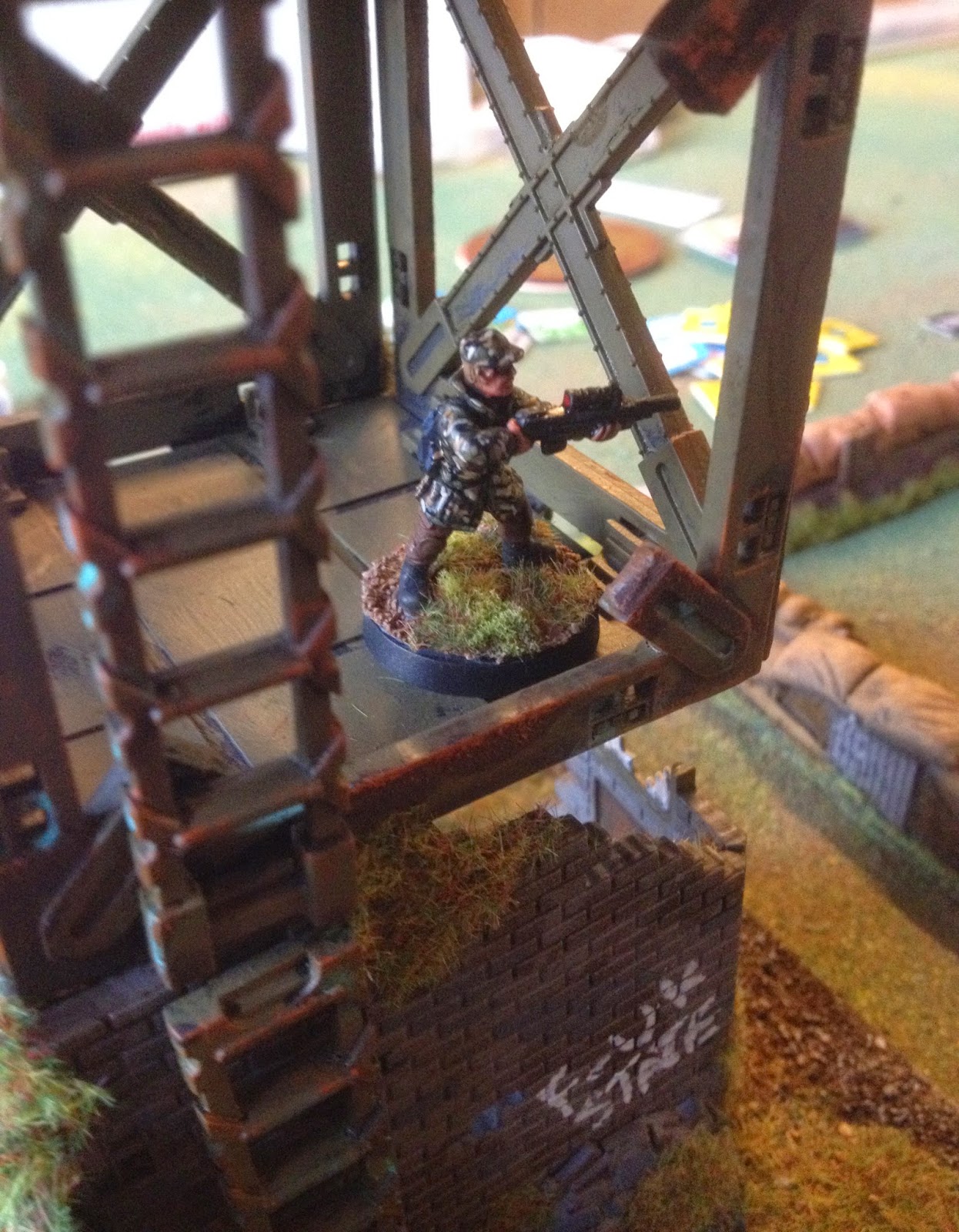 Drexyl climbs the tower ready to take up a good vantage point to snipe from whilst the States Gaffer finds some loot and moves back to lay claim to it. At the same time Ezra’s search around the old transport plane comes up trumps with some nice loot. Stumbles goes into hiding by some sandbags hoping to catch the drop on any of the Families gangers and Reggie darts up a ladder onto the planes wing. Keith seeing Reggie’s movement sprints into position by a rusting vehicle and takes a wild shot which easily misses Reggie. Finally Adam takes up position and orders Reggie to return fire on Keith, the resulting shot only ricochets’ of the rusty car.

Adam notices a 4 Leafed Clover on the ground. With the State still on the initiative Keith moves around the cover of car and shoots at Adam, fortunately being in cover and Tough as Old Boots Adam shrugs of the hit. Skylar still dropping back manages to stake a claim on the loot she found. Baz claims his loot for the State in return and Reggie moves further along the planes expansive wing and lets loose at Keith, hitting him easily but not causing any damage. Betty comes out of hiding and snaps a pistol shot at Reggies who easily dodges the wayward shot. 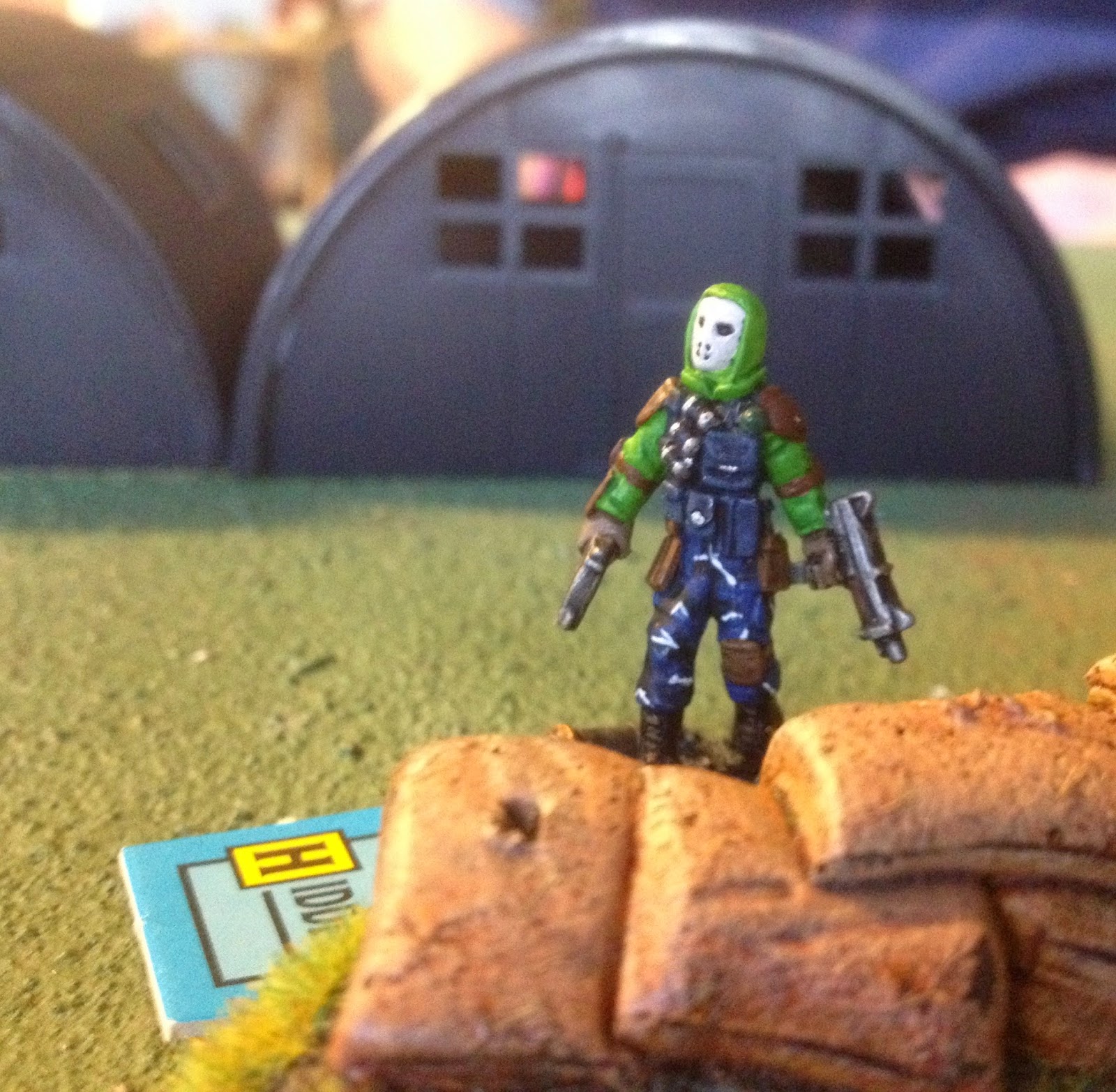 Ezra quietly drops back with his loot and claims it. Gaffer re-enters the fray opening up with his Smg at Reggie, who although hit a couple of times manages to stay standing. Adam darts from cover to cover and picks up some loot and tries to order Reggie to shoot, its lucky hes got that 4 Leafed Clover otherwise the order might of failed.

Reggie opens up on Betty but the haphazard fire misses easily. Stumbles leaps up from his hiding place, vaulting the sandbags and dual wielding his Smg pistols, lays fire right into Adam. Adam shrugs of the shots easily and turns with an evil glare towards Stumbles.


Drexyl climbs higher up the tower and takes aim but he’s just out of range. 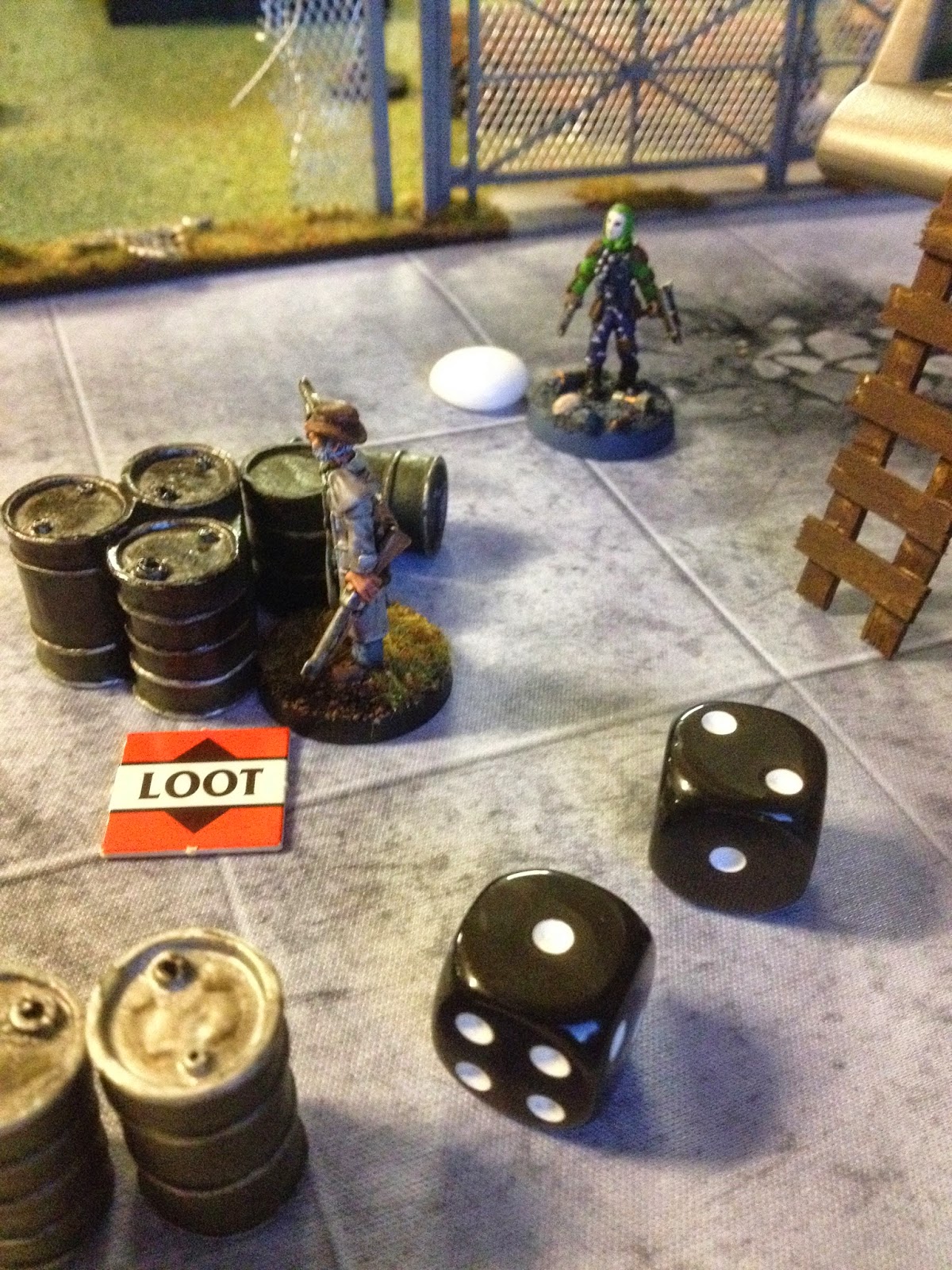 Adam seizes the initiative with Some Best Laid Plans after the State tried Seizing It whilst Reggie Taunts Betty. Ezra re-enters the fight after making sure the loot is safe and Gaffer aims at Reggie, loosing a shot which misses completely. Gaffer then orders Betty to shoot and she also misses. 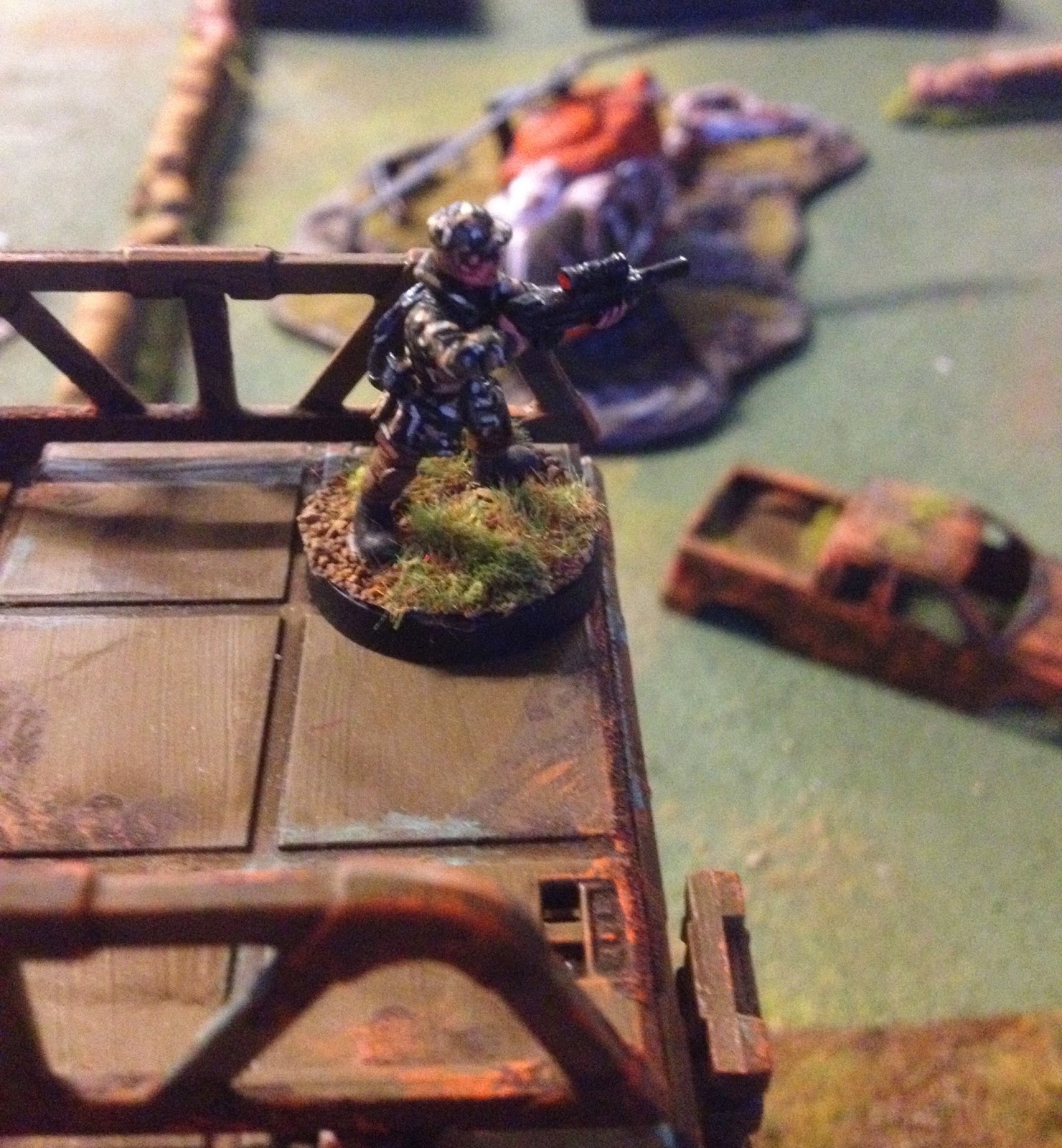 Adam advances forward and shotguns Stumbles at short range, but the powder charge in the shells must be inadequate as nothing hits, his subsequent order to Reggie to fire also results in a miss. The Trade Guilders are really going to get a stern talking to about the state of ammo these days.

Stumbles returns fire and stares in disbelief as Adam still stands! Drexyl now in a perfect position takes aim and puts Stumbles down. In return Keith slams in a fresh magazine and opens up on Adam downing the Family’s leader. Seeing Adam drop, Reggie slinks up to the wing tip and drops a grenade on the downed Stumbles, the explosion and smoke finally clears and Stumbles is still alive and  looks groggily up at Reggie in disgust! 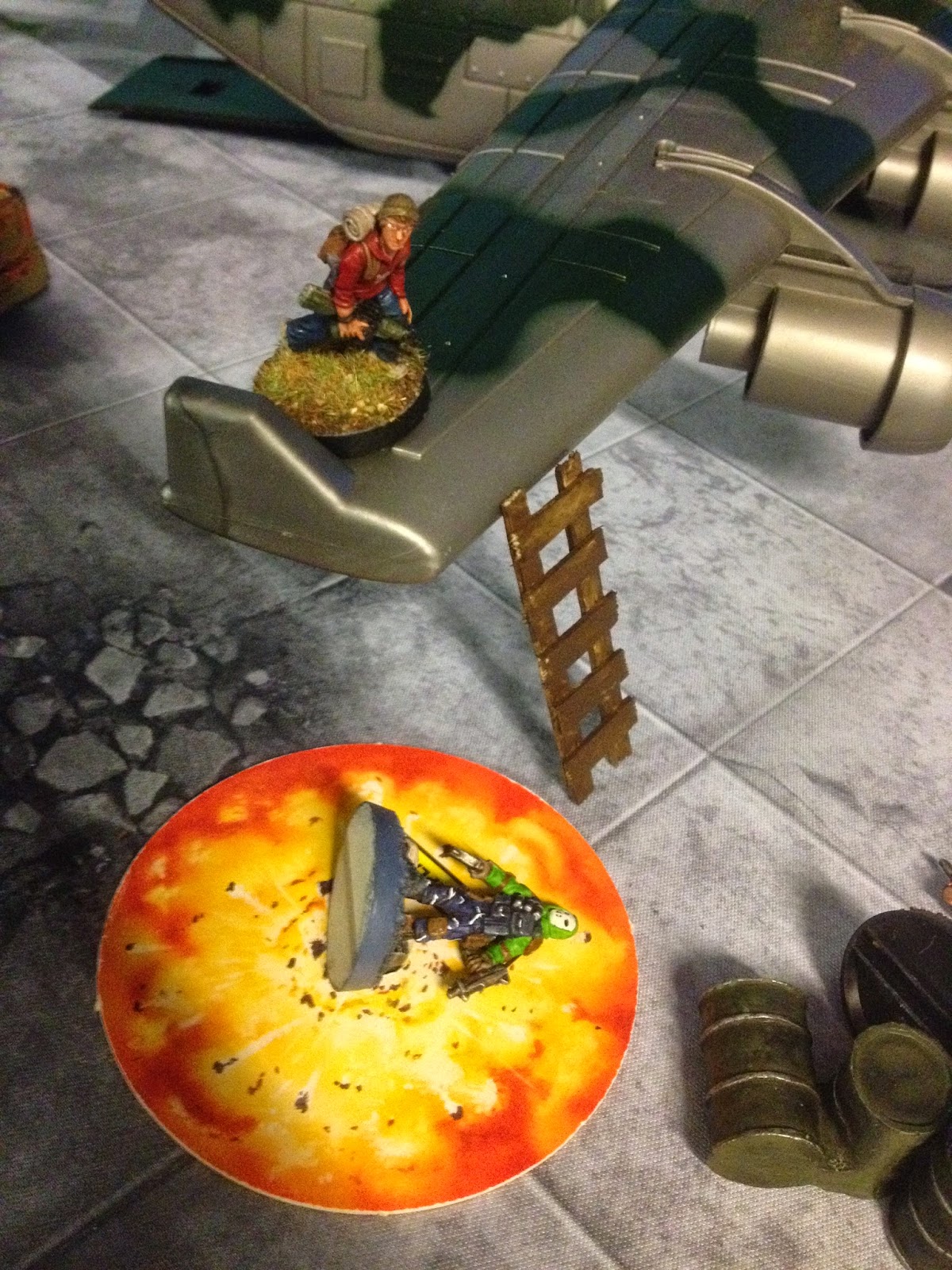 Baz and Skylar both re-enter after depositing their loot and Betty Taunted by Reggie earlier moves against him.
The State once again takes the initiative and Betty moves up to Stumbles and Heals him. Reggie seeing the State members clumped together drops another couple of grenades Taking Betty completely Out Of Action but Stumbles still manages to dodge the explosions. 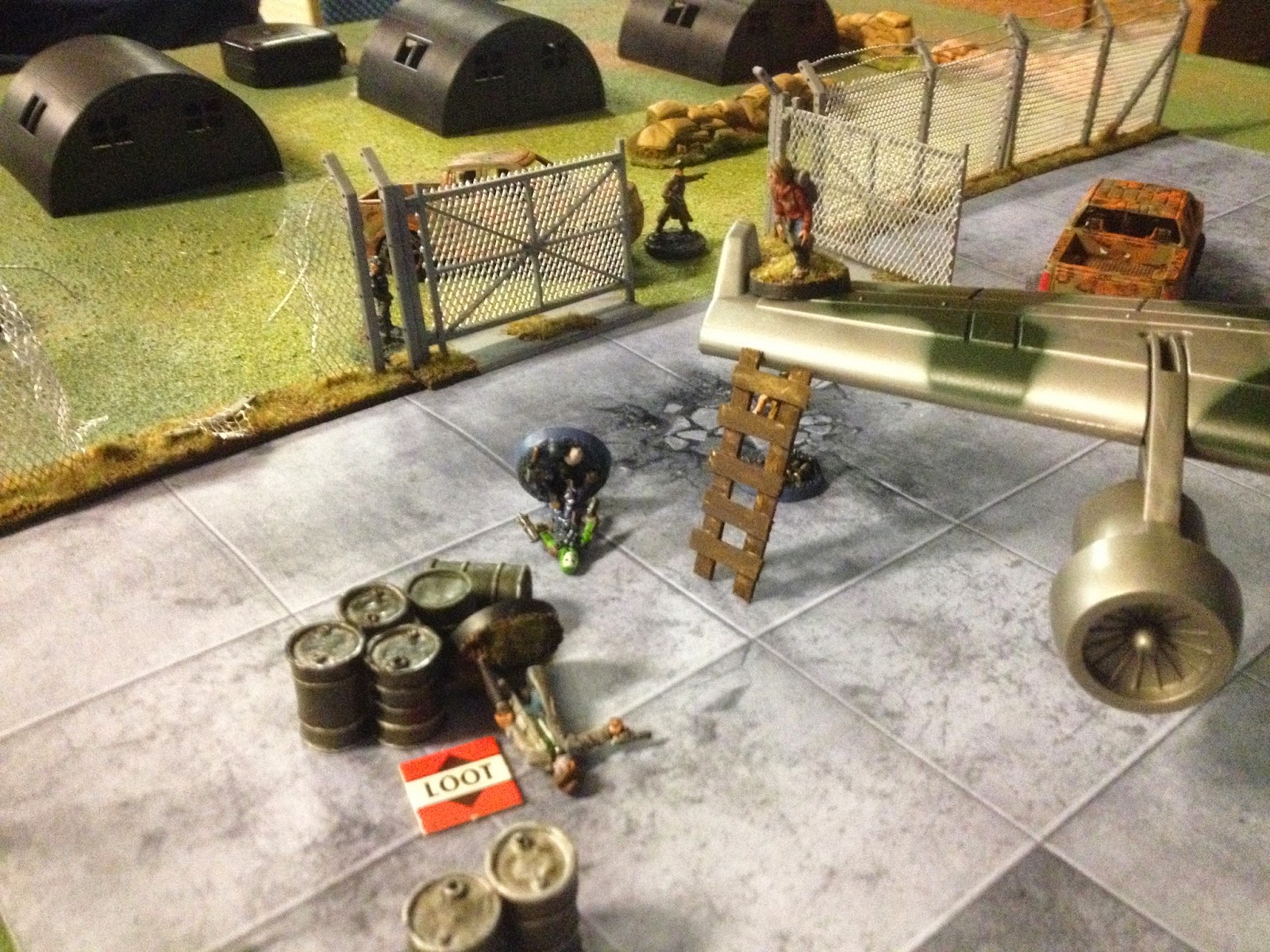 Stumbles Finishes Off the prone Adam and in return Drexyl hits Stumbles but again the ineffective ammo does hurt him. Gaffer Orders Keith to move forward then takes a shot himself against Reggie but as per the norm misses. Ezra now in position takes a long shot with his shotgun but misses. Keith in perfect position after following Gaffers orders opens up on Reggies and downs the young lad. 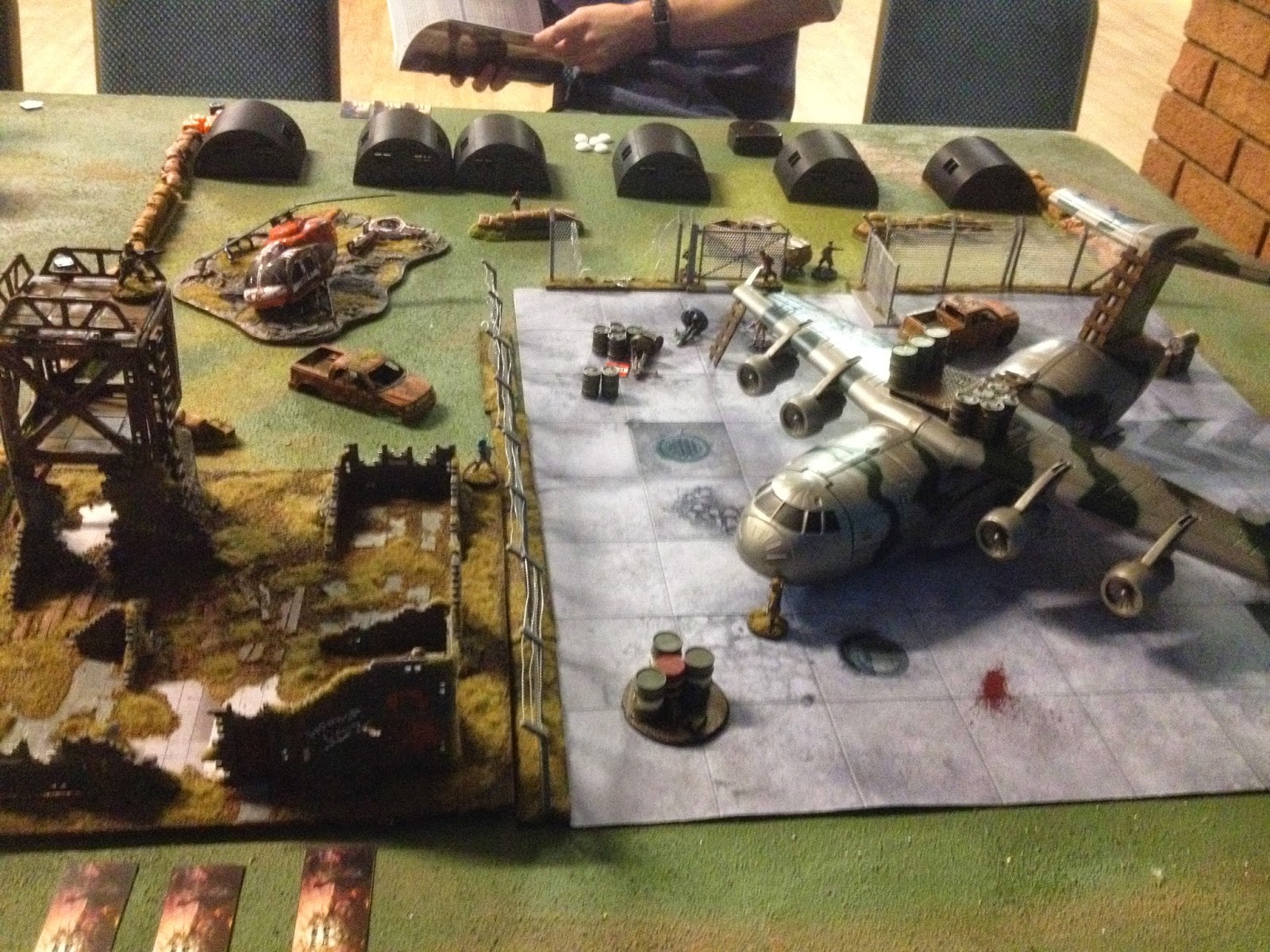 Skylar adances silently around the chain link fencing and joins Ezra whilst she shoots Stumbles. A miss! Can nothing take out this charmed State trooper? 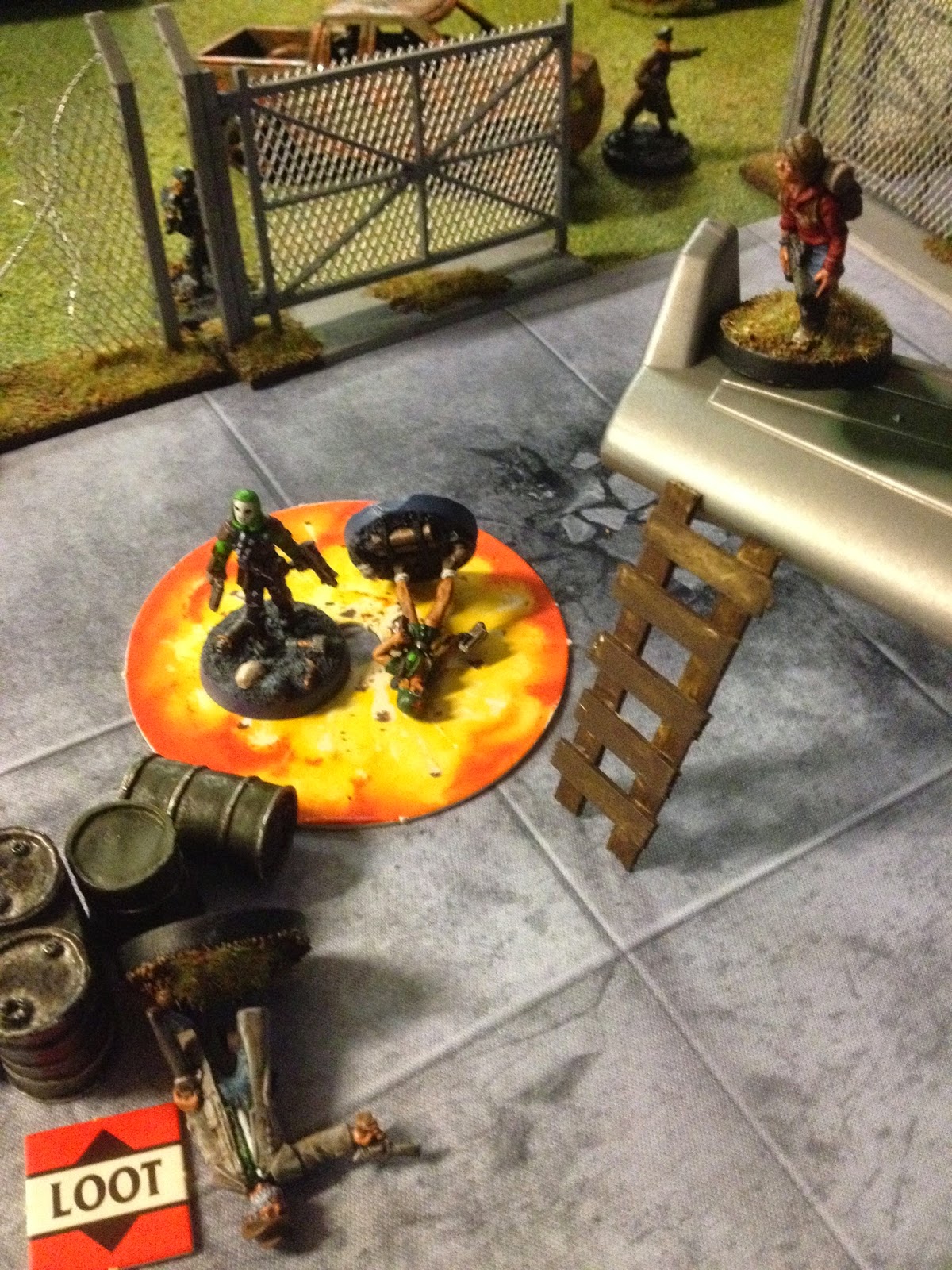 Even with Adam out of action the Family take the initiative and Ezra moves forward to collect the loot previously dropped by Adam and shoots Stumbles with close range shotgun fire. Stumbles just stands and laughs manically! Gaffer fails to order anyone and moves through the gates, hitting Tripwire he staggers but remains on his feet. Skylar misses with a wild pistol shot whislt Keith opens up on Ezra. Drezyl obviously watching the clouds instead on the firefight from his lofty perch misses all his shots whilst Baz and Stumbles also miss. Some serious weapon maintenance is considered by all parties. 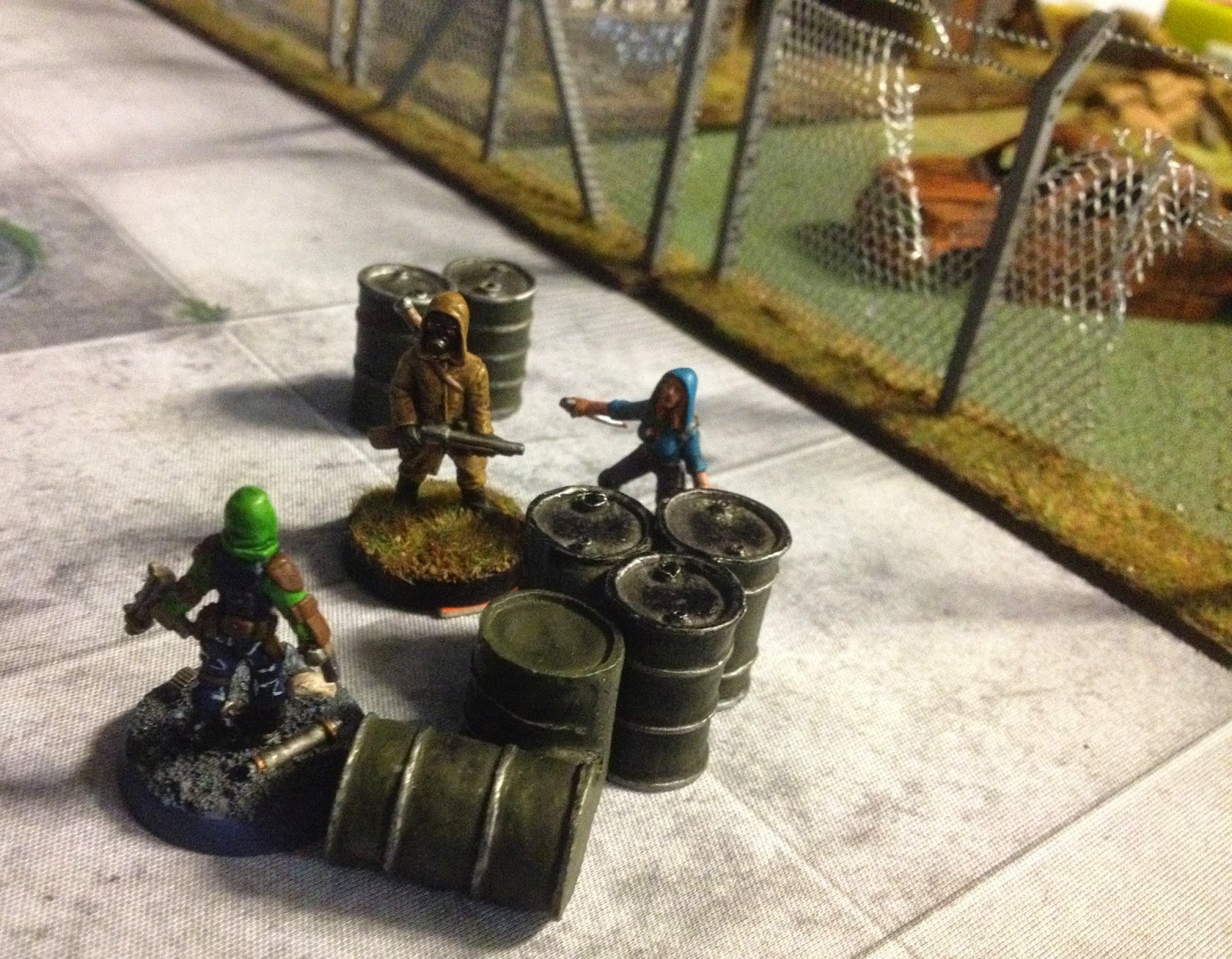 Ezra finally downs Stumbles with his first shot but cant manage to kill him with the second! Gaffa launches himself forward and takes Ezra Out of Action with a flurry of shots. Drexyl now seeing the carnage below takes a bead on downed Stumbles finally puts the itinerate trooper Out of Action. Skylar charges Gaffer in hand to hand but as the skies are darkening the combat is stalemated and both sides withdraw, picking up their casualties and counting up the hard won spoils. 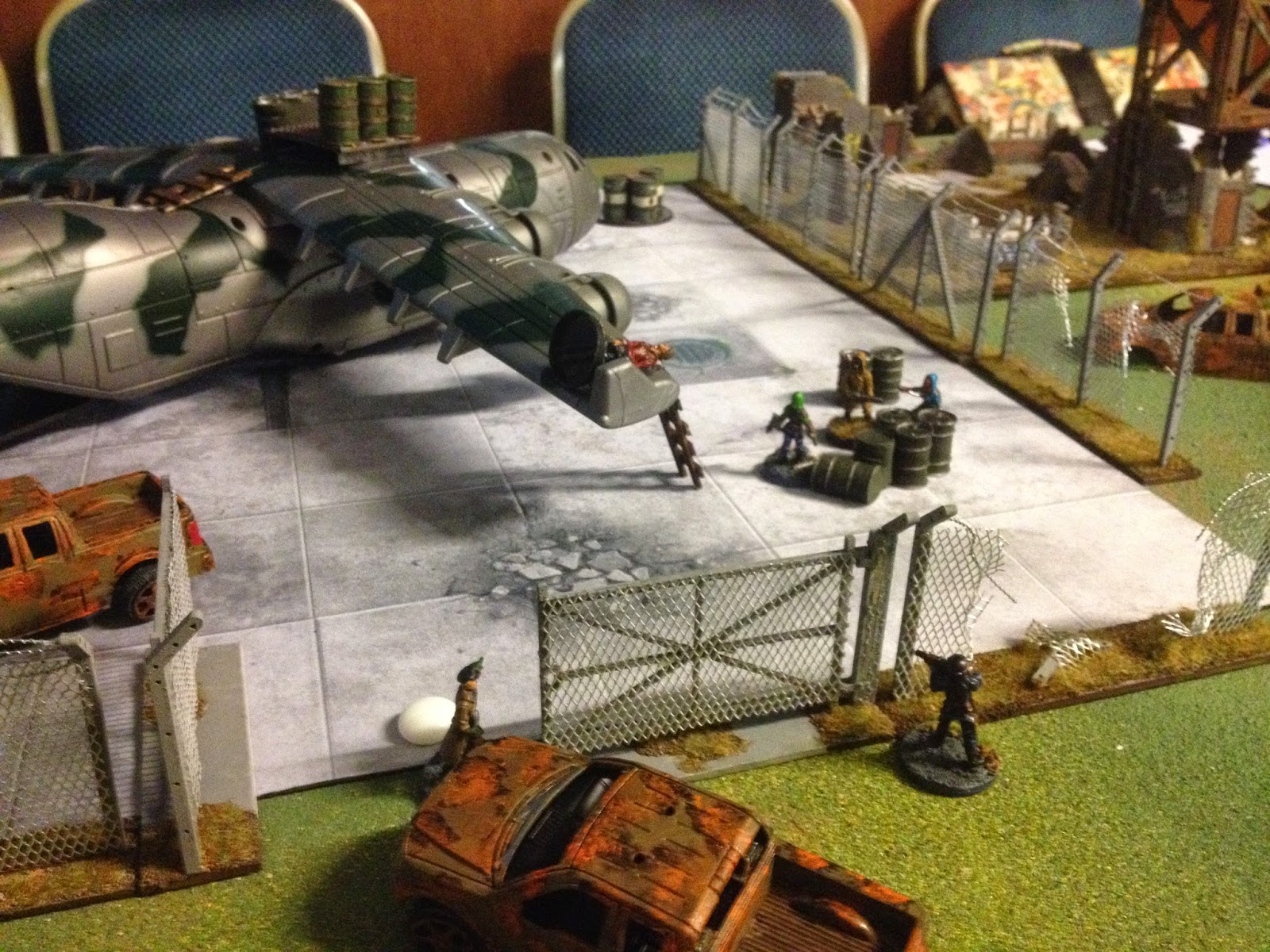 Family win. But overall the States Stumbles was definately Man of the Match after surviving so many shots, grenades etc...
Posted by Carl at 16:15 7 comments: