Carrying on with my 15mm TANKS, next up for you to appreciate is my USA Armoured force. This is made up of 4 x M4A2 Shermans which can be used either as 75mm or 76mm configuarations and 1 x M26 Pershing. 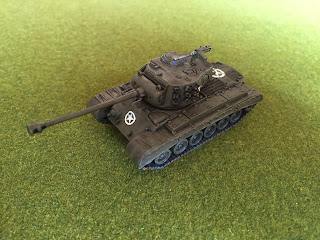 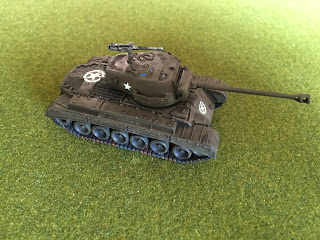 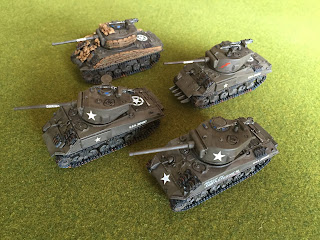 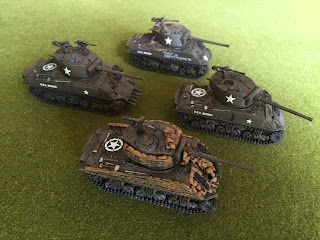 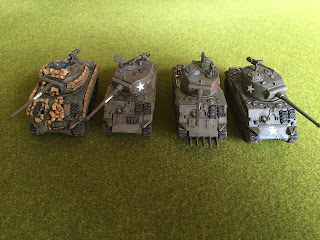 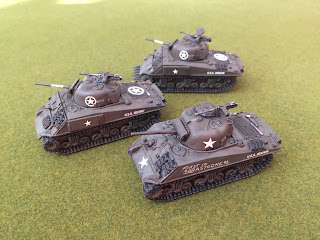 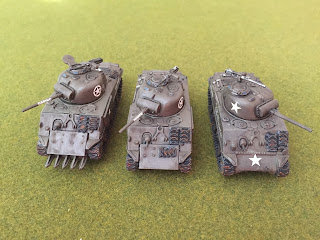 To make the most of my newly painted British Tanks, I noticed that there was another small expo type show (Strategy) being held in Telford, Birmingham, last weekend. Questing Knight Games, Telford's local gaming shop were hosting a few small demo games along with an X-Wing and TANKS tournament.

Not being too expensive and only attending for the Saturday, I signed up for TANKS.

Arriving a bit early on the Saturday morning I got speaking with Jeff the organizer of the tournament and was informed that unfortunately a few big names had pulled out of the show and it was not as successful as the organizers thought it would be. I must admit being there for the day, the place was half deserted and the show has a long way to go before it can complete with the like of the UK Games Expo or even a modest wargames show like Colours or Triples, 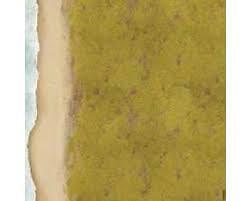 Again because of the lack of customers and attendees, unfortunately only four people had signed up to play in the TANKS tourney and three of these were local lads, two of which were members of the Telford Wargames Club STAGS. It meant that we would get three games, everyone playing each other once and everyone would at least get a prize. Bragging rights for the winner though.

As I had traveled the furthest to attend, Jeff very kindly gave me one of the new 3ftx3ft Hit the Beach mats that had just been released for the game.

Game 1 vs Roddy and his British 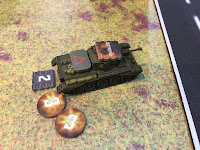 So four players and two of us had Brits and the other two had Germans. Funnily enough each force was quite similar. I drew Roddy to play first and every game was going to be the same scenario - King of the Hill. Basically an Objective was placed in the centre of the board and Victory points were scored after the first turn for each uncontested Tank within one measuring arrow. The game played for 6 turns and the first to a maximum 3 VP's won. 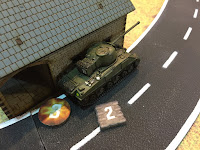 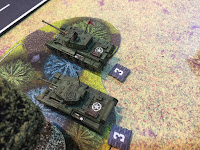 Roddy Started with 3 x Cromwells and a Firefly were I had 1 Cromwell, 1 Comet and a Firefly. Roddy won initiative being the Attacker. I started moving my Tanks straight towards a wood for cover and started hammering away at Roddys Tanks. He traversed around the buildings towards the central objective trading shots all the way. Most of the game remained a stalemate until I took out a couple of his Cromwells which allowed me to gain 1VP on the objective. Roddy managed to destroy my Cromwell and Firefly then I got some great dice and obliterated his Firefly. With only my Comet and one of his Cromwells left the game ended. 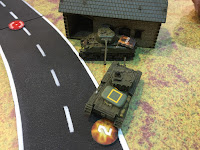 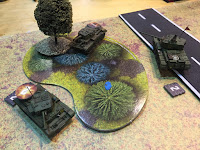 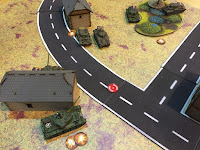 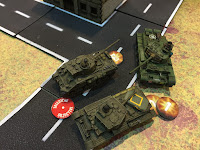 Game 2 vs Jack and his Germans 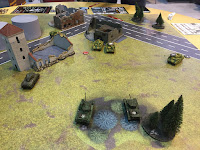 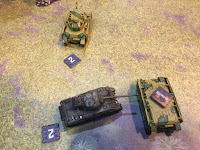 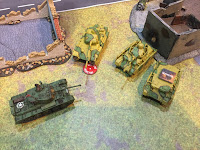 Being the winner of Game 1 I swopped tables to player the loser of the other game. My next opponent was Jack who was one of the STAGS local lads. Rolling for initiative, I again lost with Jack being the attacker. Choosing to deploy on the most open side of this table, I thought it would give my Fast Tanks an advantage towards the objective, not having to navigate around the buildings and still having a central wooded area for me to pour fire onto Jacks Panzers. 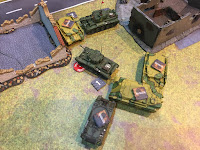 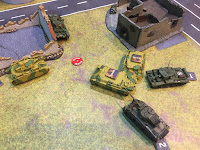 I nearly made a fatal error right at the beginning and allowed Jacks Panzers to creep up onto the objective whilst I was still out of range of it and nearly lost in turn 2!!

Fortunately I realized this and quickly darted my Tanks up to contest it and managed to knock out a PZ IV. Jack tried to flank me as he outnumbered my forces but another of his Pz IV's ran straight into my Firefly which turned it into scrap. A Panther quickly succumbed to direct fire from my Comet and then his final Pz IV in a death or glory charge was quickly destroyed. However in its final moments a final shot hit my Firefly brewing it up.

A devestating game for the Germans with them being completely wiped out. I won 2-0 on VP's and destroyed all Jacks 100 points only losing 29 points.

Game 3 vs Anthony and his Germans 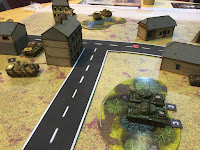 Last game and up against another STAGS lad with Germans. Anthony had 2 x Panthers and 2 x Pz IV's up against my 3 Tanks. This time I finally won an initiative becoming the Attacker. Back on the first table I played one I started on the same side and moved straight towards the main woods for cover. Anthony swung his Panthers through the buildings to join up with his flanking PZ IV's. 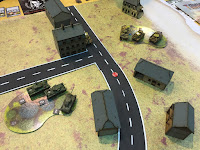 Concentrating all the firepower from my 3 Tanks I let rip against one of his Panthers crippling it, but I couldnt destroy it. Anthony then with a devastating barrage crippled my Firefly, bailing out the crew. even with their liquid courage upgrade I couldnt remount then and finally the poor 17pdr Sherman was scrap. 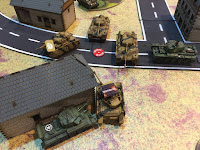 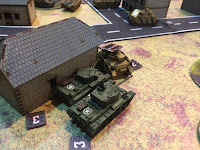 Tacking revenge I darted my Cromwell around a stable block and rear shotted a Pz IV destroying it and finally managed to knock out a Panther. Unfotunately my positioning was off and I could not contest the objective.

End of the tournament and both Anthony, Jack and I were on 3 VPs. Poor Roddy never got any. However I had destroyed the most and was declared overall winner.

Everyone got the same prize though due to the low numbers. We all got a very nice prize pack consisting of 1 Tank pack and the scenario items from the first two organised play packs.

In all it was a cracking day out and I had 3 great, fun games with some new people. In my opinion, it was well worth the 4 hour round trip and £10 entry fee.