Imagine yourself as the commander of a unit of astronauts on the moon. You’re thousands of miles from earth with orders to protect the vital assets of the homeland. You and other astronauts like you seek to defend your territory and resources from rival factions and countries. Choose from various ranks, classes, and even some named characters, and muster your forces! 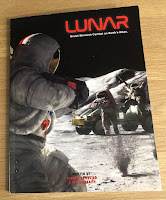 A Skirmish game of brutal combat on the Moon.

Humanity has colonised the Moon. Numerous countries and now companies struggle for control of territory and resources. What was once a journey of scientific cooperation has now become as is usual for the human race - a theatre of war!

Lunar is a 32mm skirmish game set during humanity's battle for lunar superiority. You choose from a variety of different factions - NASA/USA, USSR, Republic of China and Freelancers/Corporation. 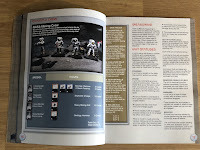 Lunar consists of 3-5 miniatures per side and is played on a 2’×2′ area, although larger boards can be used for multi player. Using a simple D6 mechanic, it will be familiar to many tabletop gamers and easy to pick up for others. You start by building your teams/forces with character, item and equipment cards and battling other players for control of mining and supply nodes. Each Unit has an Oxygen cost and your team is made up of units to a set overall oxygen cost. Equipment costs credits and each item has it own cost, a regular game could be set at 20 Oxygen and 25 credits.

It is a fast paced and BRUTAL system of low gravity combat with the focus more on melee with minimal ranged combat.

The rule book is packed with background, full colour art and the rules are all laid out with explanations on moving, combat etc. Scenarios are included as well as a full set of campaign rules.

Each unit (a single miniature) has its own card with its range of stats such as movement, mass and resiliency. After choosing your unit you may add item and weapon cards.

The cards are full colour, playing card size and of good sturdy quality. The artwork is nice and bright and all the stats, rules etc are easy to read.

Equipment cards are the same size and illustrate items such as explosives, geology hammers and medical supplies. Each faction also has a faction specific item, for example the USA can take a Star's and Stripes flag which endue advantages.

The concept of “mass” is central to the mechanics of Lunar, each unit and item has a mass value that affect combat, movement and damage. As your mass is increased, you can lose points of movement, amongst other things. 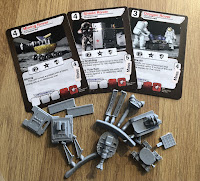 Lunar has a variety of astronauts, unmanned and heroic units. Each are displayed on the tabletop with highly detailed resin miniatures. A full range of  miniatures and vehicles are available for the various factions! Left is a picture of the universal unmanned rovers that any faction can take.

Lunar is fully designed for campaign play and features a framework for playing linked games. You can upgrade your crews with new members and better equipment by purchasing shuttle resupplies, as well as upgrading their settlement with additional enchantments. 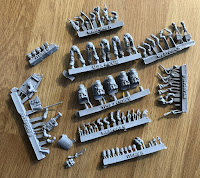 Each faction has a multi-part set of legs and bodies that can use a universal sprue of weapons and items.
They are based on a mix of historical designs from the 60’s 70’s and 80’s with an added mix of Sci Fi.
These are very smooth, crisp casts and even though the sculpts are basic in torso and legs, the addition of separate arms and equipment can make miniature a unique character. 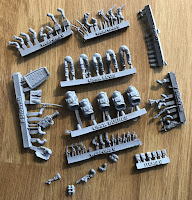 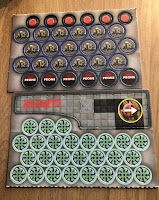 A hard cardboard set of double sided print counters and measuring gauge for ranges and movement.
Well printed and centred artwork on study card stock, very nice quality and should hold up for sometime in regular game play. 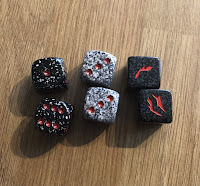 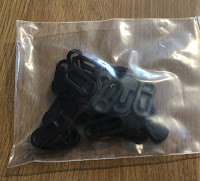 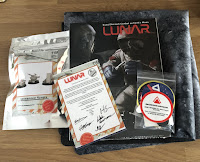 As Black Site Studios ran a backroom project, similar to kickstarter and pre order combined, I was also able to get hold of the 2'x2' neoprene moon mat as well as the unmanned universal moon rovers.

I also added to my order, moon buggies for all the factions as well as the Freelancer and Republic of China forces. These will be arriving hopefully soon and I will then post up these items. 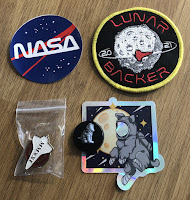 As a little treat for being part of the backroom project, when my first wave arrived it has some lovely stickers, embroidered patch, space shuttle pin badge and an exclusive moon dog miniature.

Cant wait to get these miniatures painted up and start some Lunar Battles.