Another hiatus on blog posting thanks to real life getting more and more in the way of hobby pursuits.

Managed to have my very first game of Warmaster (Revolution) after eyeing this game up over the last 20 years, I finally got myself a Bretonnian army and after painting up just over 1500 points worth of models I got a game arranged against my friend Nic's Dwarfs.

As this was the first game ever and primary a learning experience to get the rules down we set the table up and would be just going for a straight on battle with no objectives or scenarios conditions. 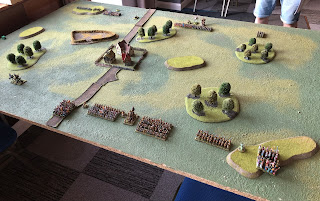 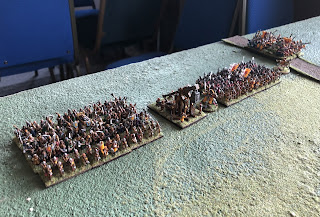 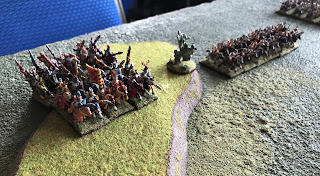 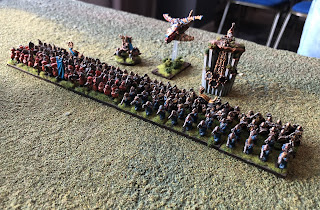 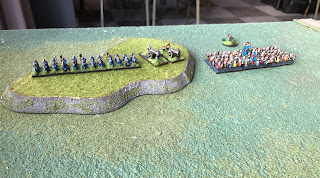 First & Second Turns - Quick turns due to both sides bad command rolls. Dwarf's move first and push up with their Miners on the left and Rangers taking the woods on the right. Warriors, Slayers and Handgunners advance through the centre whilst the Gyrocopter threatens the centre. 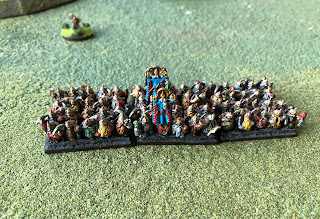 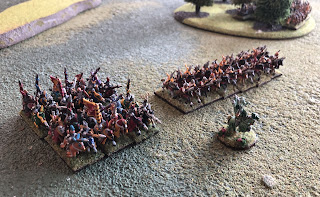 Bretonnians, Squires and Knights advance on the right flank, whilst the main infantry block move through the centre towards the hill. Enchantress fails to command the Pegasus knights who just enjoy soaring on the thermals

Third Turn - Dwarf Rangers stroll through the woods and loose off crossbow shots against the Squires, forcing the light cavalry back but doing no major damage. The main Dwarf block advances again through the middle. Gyrocopter fires against the Knights behind the village and drive them back.

Again the Haughty Pegasus Knights refuse to be drawn into the battle. Squires run and shoot against the Rangers dropping a stand and forcing the rest back deeper into the trees whilst the Knights continue round the flank, hoping to threaten the rear of the Dwarf line. 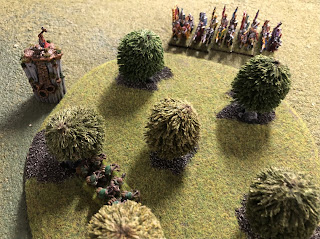 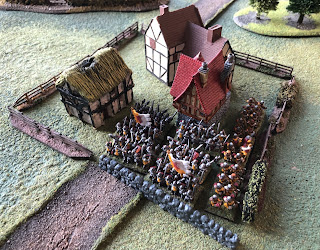 The main action though comes from a devastating shot from the Trebuchet, which along with some wounds already caused by Archers completely destroy a unit of Handgunners supporting the advancing Slayers and Warriors. 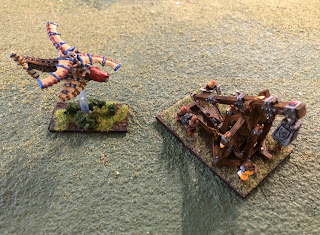 The Slayers but not the supporting Warriors charge the hill and the defended Archers and Peasants camped on top of it. A few arrows find their mark causing a few wounds but the Slayers pile in and remove a stand of archers, with subsequent pursuits and rounds of combat the end result see the whole unit of Slayers destroyed, the Bretonnian Archers destroyed and one unit of Peasants destroyed. 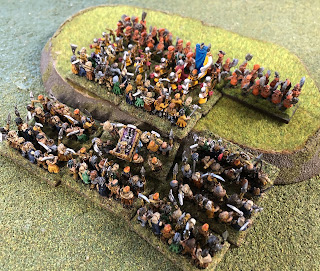 In response to the Men at Arms taking the village, the Dwarf artillery opens up and with a hail of cannon shot and heated sulphur from the flame cannon the remaining stands of men at Arms are driven back to the rear of the village.
The Bretonnian's respond with the Archers attached to the Men at Arms Brigade, detaching themselves and moving into a position to shoot at the Gyrocopter, the arrows fall just short of the hovering death machine but then the Pegasus Knights then take advantage and charge into the rear of the machine destroying it and leaving a hail of mechanical wreckage falling to the ground. 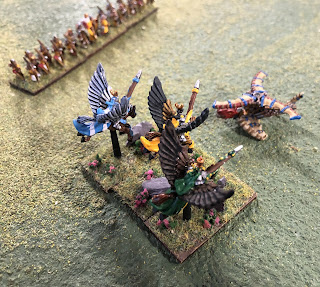 The Men at Arms recover and again take up defensive positions in the village. The Remaining Peasants along with the General charge down the hill into the Dwarf Warriors who remain stoic in the face of the horde of charging Grail Zealots! the resulting combat see's the doughty Warriors cut down completely, but not before more peasants are felled. 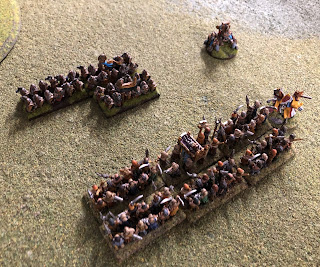 The Squires manage to pick off more Rangers in the woods.
Turn 5 - The battle has been bloody and demanding but still remains a stalemate. The Dwarfs open up again on the troops in the village with their Artillery and then charge into the remaining defenders with their Miners, pushing them out of the village first, then utterly destroying them before consolidating back into the village to defend against the possibility of a counter charge from the Grail Knights (which I completely didn't do as I thought Cavalry couldn't enter built up areas) 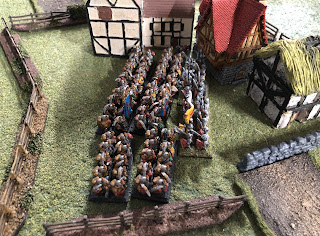 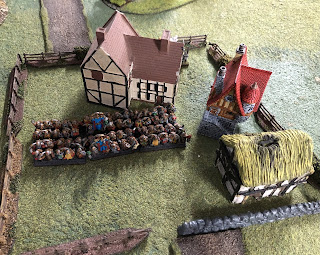 The last unit of Peasants charge into the woods on the right flank cutting down the last of the dwarf Rangers, leaving the Squires to move into the centre of the field and shoot at the Flame Cannon which explodes tremendously. The Knights in the rear of the Dwarf line advance but their is nothing left to charge. 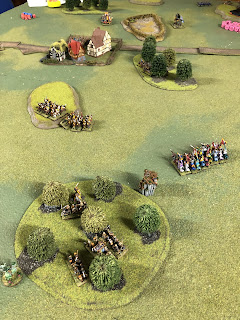 Pegasus Knights completely destroy the Artillery brigade and the Grail Knights hunt down and destroy the last remaining stand of a lonely Handgunner unit. 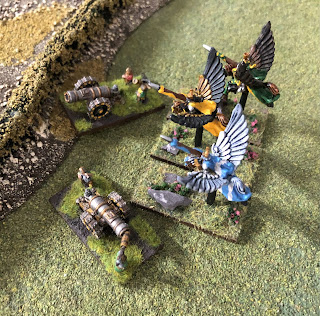 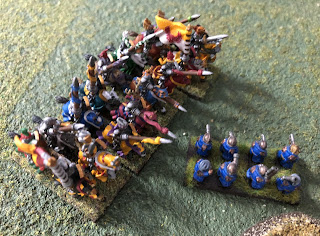 With the battle effectively over the surviving forces leave the field.
Both I and Nic had a great game. We both realised we had made a few errors and mistakes with combat resolutions and flyers at the beginning and also my mistake of not being able to move Cavalry into built up areas.
Maybe 1500 points was a bit much for a beginner game just learning the rules and we need to look more into the way multiple combats work, but overall it was a cracking game and lots of fun.
(Totalling up points of units destroyed etc. I just won technically with a difference of 75 victory points)