So this is the first Campaign game of Five Parsecs from Home, and my Star Forgers crew Captained by Mason "Steel" Forge (First post highlighting the crew) I have decided to run my campaign to a total of 20 Campaign turns on normal difficulty which means there will be no changes to experience, story points gained or changes in the number of enemies I would fight etc.

Having assembled his crew and paid off a small amount of the debt on the Solar Conveyor, Mason decided to stay on Erlich-4 for the time being thanks to the possibility of being able to call, not only on his family ties but maybe the contacts that Cal and True brought with them.

Whilst the ship was still being overhauled by his families engineers, Mason allocated SH-1R3 and Cal to liaise with one of his distant cousins and see what they could get in trade for the few left over odds and sods found in the hold. This proved reasonably fruitful as although his cousin worked as a trader, he wasnt the most astute in getting the best deal for himself.

Cal came sauntering back more than happy with SH-1R3 lugging a Military Grade fuel cell and a rare instructional manual in a trader language which Mason could easily read.

Kheth was more than happy in his homemade firing range in the cargo hold, honing his skills and True mentioned she wanted to try and clear up the wetware hacking debacle that got her into so much trouble and Chaket decided to accompany her as protection on her trip.

True must have been able to seriously sweet talk the disgruntled trader as she came away from the meeting with a promising lead which could prove financially beneficial. This called for a quick drink thought Chaket before returning to the ship.

Whilst the crew had been out at his cousins or patching up issues etc, Mason had found a Patron in a Private Organisation who had offered him what seemed a nice simple job, danger pay was average and there didn't seem to be any other benefits or hazards attached. The Mark also didn't seem to mind when the job was completed.

However after hearing of True's promising lead, which involved the possibility of fighting off some local Bounty Hunters, and maybe the chance of some really Shiny bits, as well as there being no time frame on the other job, Mason decided to just take up the Opportunity of gaining some quick fast cash.

Gathering everyone together, the Star Forgers zipped across the Star Port by Maglev to the Shuttle Docking bay mentioned in True's lead.

Battle - Fight Off the Bounty Hunters in the Shuttebay 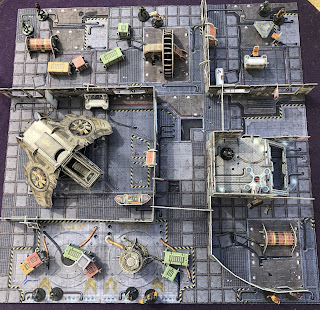 Turn 1
On entering the Shuttlebay and its surrounds, Mason divided his crew into 3 teams and spread them out to cover as much area as possible searching for the Really Shiny Bits that the lead  hinted at. He suddenly noticed a number of individuals moving in and out of cover on the other side of the bay "heads up guys and gals, looks like them hunters are already here" he shouted. 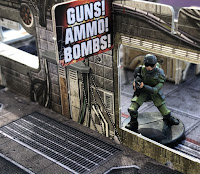 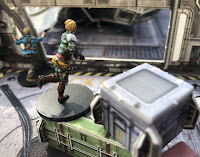 SH-1R3 noticing what was probably one of the hunters dash across the doorway of the munitions shop, strode forward and loosed off a shot which drilled aimlessly into the bulkhead.

That opening shot caused the Bounty Hunters to burst into action and a hail of bullets flew across the bay from numerous directions but the range hasn't been accessed properly and not one of the Star Forgers is hit. 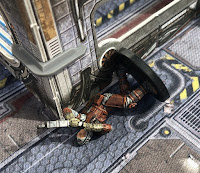 Mason and the rest of his crew move into better positions and Chaket and True get a lucky bead on the Hunter Specialist, but where as Chaket's shot is rushed, True takes aim from her perch amongst the containers and hits the enemy specialist in the back of the head with a well aimed laser blast, taking him out.

The Bounty hunter who was backing up the Specialist panics seeing his colleague go down and bails!

Cal notices something resembling the description of shiny on top of the bays resident bar. 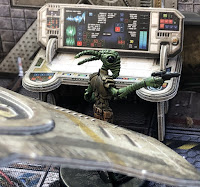 Again SH-1R3 reacts quickly and shoots at the hunter who is in the cover of the munitions shop doorway, again the bots tracking sight fails and the round chips more paintwork off the bulkhead. Cal, attracted by the shiny, climbs up to the roof of the bar and is stunned to see an inert spider bot "Boss, this will fetch a cred or two if we can get rid of these hunters" he shouts over to Mason. Chaket, backed up by True make for the open corridor in front of them now that its no longer covered by enemies.

Mason notices what looks like the Hunters boss giving orders and moves into the main shuttle bay "Kheth, cover me, Im taking down that bug!" Handcannon blazing as soon as he's in range, the Hunters Lieutenant slams back against a computer console, leaving  green ooze all over plasti-surface. 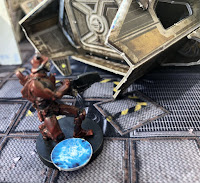 Kheth's covering fire hits the accompanying riflemen but only stuns him, forcing him into cover behind the shuttle. "Don't worry about him" Mason calls, "He's crawling for the exit, I don't think he's going to be an issue anymore".

A loud explosion then rips across the bay. "What the hell was that?" Shouts Cal. ++ Grenade explosion ++ opposition running for cover ++ compute action mishandled ++ comes the computerised answer from SH-1R3 as two hunters come hurtling out of the munitions shop, in different directions.

The hunter, SH-1R3 had been shooting at was suddenly right there in point blank range - stunned but standing after what appeared to be a fumbled grenade, but even the Bot's compu-aim couldn't reset quick enough and his fire completely missed. "I’ll have to re-calibrate that bloody Bot" thought Cal as he watched from the roof of the bar.

The other hunter found himself next to the corridor where Chaket was advancing, and regaining his composure loosed of an in range shot from his handgun, felling the large Vul, causing True to scream seeing her friend fall.

The hunter who had dropped the grenade was suddenly aware of where he was and seeing both SH-1R3 and Cal fired wildly clipping Cal and momentarily stunning him. 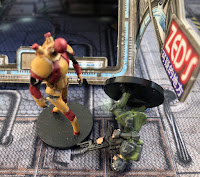 After having time to self calibrate, SH-1R3 slams into the hunter in front of him and with a crunching sound of bone that made even Cal wince, turns the enemy hunter into a broken, red wet stain on the plasteel floor.

Hearing Trues screaming but unsure what the howls are about Mason runs towards the hanger bay security door as see's a hunter aiming his handgun down the corridor. one loud Handcannon blast next and the hunter is felled. "Thats the lot I think boss" shouts Cal from his rooftop overseeing the whole of the bay area.

As the din of combat subsides, True runs to Chaket's side "Wow, I thought you were a gonna big guy" she says kneeling beside him "looks like is just a minor hit, you'll be up and about in no time"

With Kheth and SH-1R3 helping True with Chaket back to the ship, Mason calls over Cal. "So thats a Real Shiny Spider eh?" "no doubt about it boss" replies Cal "more creds in our pockets once we hock it to the right vendor hey"

"Aye and while were at it might as well rifle a few of these lockers" said Mason with a roguish wink.

A quick search around pulled up some booster pills as well as a damaged Plasma Rifle and damaged Ripper Sword which caused Cal to scoff "Who do you think you are boss, Errel Phlin?" as Mason brandished the bent, cracked blade around his head.

On the way back to the ship Cal's wrist comm beeped...an old arms dealer, he used to know heard about him signing on with a Trade Guilder and the Solar Conveyor and wondered if a tribute of guns would help with future trade relations with Mason's family. "Wont hurt" winked Mason "whats he offering"

After a few more exchanges over the comm Cal went off to meet the dealer and returned with a Military Rifle, Shotgun and Machine Pistol.

"Well thats us a force to be reckoned with now" laughed Mason, and the crew cracked up.

Whats next in store for the crew of the Solar Conveyor. Will they stay on Erlich-4 for a bit or set off into Fringe Space?