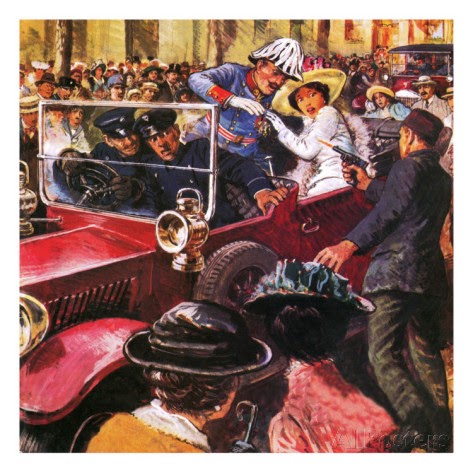 The shot that changed the world rang out on a sunny summer's morning in Southeastern Europe. No one knew then that the assassin's bullet would spell the death not just of an Austrian aristocrat but the entire global order, with four empires and millions of lives lost in a conflict on a scale never before seen.

Exactly 100 years ago (4th August 1914) we (the British) entered the First World War after Franz Ferdinand, heir to the throne of the Austro-Hungarian empire, and his wife, Sophie, were shot at close range by a young Serbian nationalist on the streets of Sarajevo on the 28th June 1914. The assassination set off a chain reaction that, barely a month later, culminated in a continent at war.

What many thought would be a brief, even heroic, conflict metastasized into a four-year nightmare that engulfed dozens more nations, including the United States, redrew the map of Europe and introduced the world to new horrors such as chemical weapons and shell shock.

In such a cataclysm there are no winners, many say, and it's fruitless to seek logic, meaning or justification in soldiers asphyxiating in gas attacks, or waves of men charging over the tops of trenches only to be mowed down by machine-gun fire within seconds.

With this in mind we should now remember those sacrifices, where countless soldiers fell on the muddy fields of Flanders amongst others.

The French President Francois Hollande will dedicate a memorial in November inscribed with the names of all 600,000 troops who perished in northern France during World War I, regardless of which side they fought on.

The First World War was the war that was supposed to end all wars, it swept away whole dynasties. The Russian Revolution ushered in the world's first communist state; a defeated Germany witnessed the birth of the Weimar Republic. The Ottoman Empire was broken into pieces, and the map of the
Middle East was redrawn as well.

Islamic militants tore down border posts along the frontier between Iraq and Syria, a line drawn after the Turkish empire was dismembered. The central question for Iraqis is whether their country, defined by those borders, can survive.

The nation of Yugoslavia, and a fragile hope, emerged from the rubble. But that fell apart violently, too, in the Balkan wars of the 1990s, which gave the world the brutal euphemism of "ethnic cleansing."

One hundred years ago, the butchery began, and so many lives disappeared, We must at least try for a moment to avoid such a big catastrophe in the future."

In the going down of the sun and in the morning, We Will Remember Them.