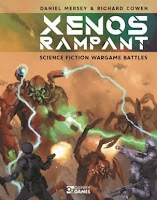 I, along with my friend Nic, just had our first game of Xenos Rampant.
After reading some very exciting and enthusiastic reviews for this new game, set alongside the same type of rules from other Rampant series games by the Author Daniel Mersey (Published by Osprey) we were looking forward to organising our forces and getting our starter game in.
Miniature agnostic and a game that can be played in any scale really,  we went for 15mm as we had a multitude of 15mm Sci Fi miniatures that we had already got for games like Gruntz and Tomorrow's War, it gave us a depth of options for a 24 point force.
This however didn't stop the usual butterfly shiny habit and I delved into Alternative Armies website and ordered myself a brand new Grey Alien force!
The Alien Commander with his detachment of invasion troops had recently attacked and sacked a Federal Stats Europa (FSE) research facility to recover a horde of stolen tech from previously downed UFO strike flyers.
Whilst preparing to transfer these to the Mothership an FSE detachment attacked!
We chose to do a simple Sweep and Clear Scenario from the rulebook and although we had built our force and chose which unit would be our Commander. Before a game you roll randomly for a commander trait to be added, this can be from a number of tables to make him either a Tactical, Strategic or Warlord type etc.
Both of us rolled traits that would not really impact this first game - this is not unusual!
Another D6 roll and Nic ended up as the Attacker and I the Defender, Nic would go first after deployment.
After some hectic firefights the Aliens send forth their Mechanoid Dominator Spheres and Cyber Cows to draw out the FSE infantry to engage in melee which the Grey Commander thought would give him the upper hand.
However the Assault Doctrine of the FSE along with some steadfast courage, saw the Cyber Cows being moo'd (mowed) down although they did cause some casualties.
The Dominators though, smashed into the remaining FSE troops and with whirling blades of death, decimated the lightly armoured infantry. 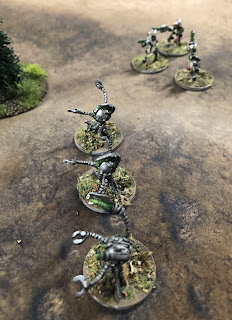 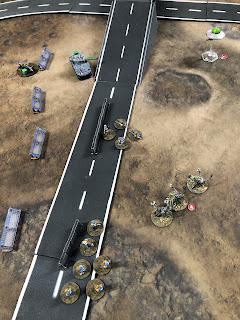 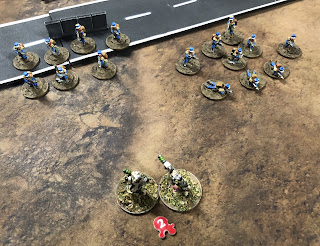 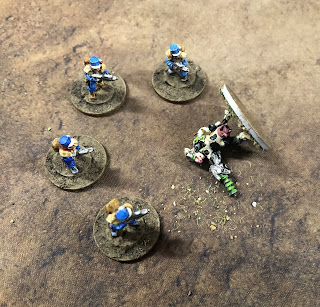 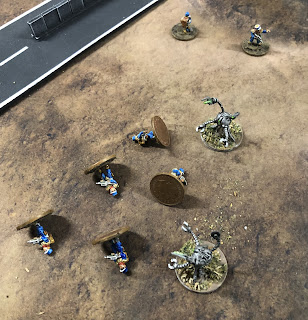 With both detachments commanders being killed (unfortunately no pics of this course of the battle) it was left to the Armoured vehicles to take control of the battlefield.